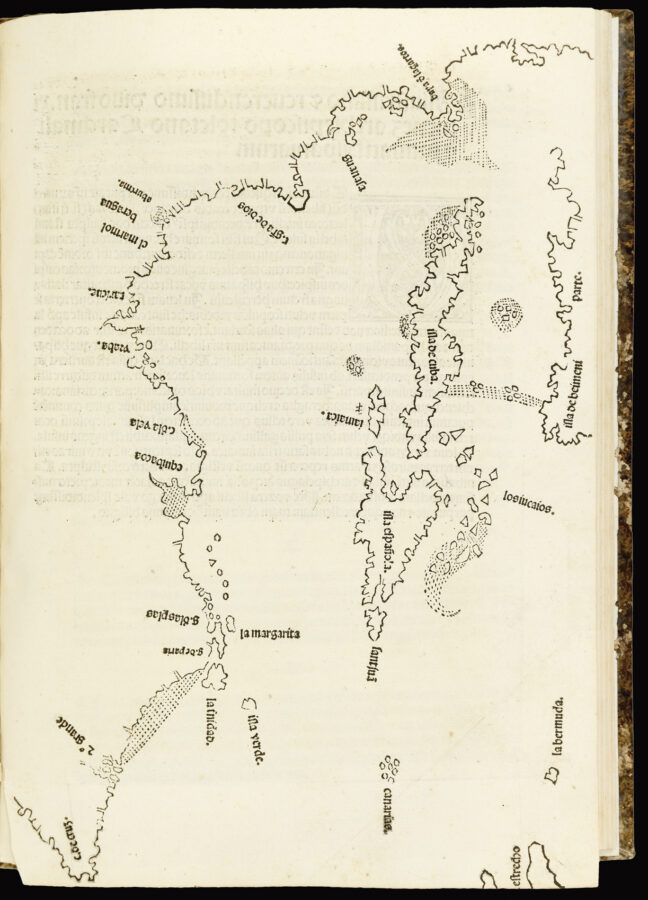 The first map devoted to the New World

The first map specifically devoted to the new world and the earliest published history of the Americas, written in Latin by ​“Decas”, or groups of 10 letters.

The woodcut map of the West Indies and the adjacent continental coast from Florida to near Pernambuco is one of the most important early maps of America. The map covers the area of the Spanish Main and the northern coast of South America. At the top of the map appears Isla de Beimeni – the native Indian name for Florida. In April 1513 Ponce de Leon, the Governor of Hispaniola, set sail to claim it for Spain and named it Florida. Below this is a strong of islands leading to Cuba, probably the Florida Keys. Jaimaica, Hispaniola, Puerto Rico and the Bahamas are all depicted, as are Trinidad and Isla Verde. There is no Western shore to Central America delineated because it was not until 1513 that the first European, Vasco Nunez de Balboa, beheld the waters of the Pacific. The depiction of the Island of Bermuda records, for the first time on a map, the discovery of it by Juan Bermudez in 1505.

In 1511 the King issued a decree forbidding the map from falling into foreign hands.

The address to Cardinal Ximenes, Archbishop of Toledo, on the verso of the leaf bearing the map, expounds the great utility of including such a map in the present work. Regarding the author of this important early work on America, we quote the following notes from E. D. Church Catalogue: ​“Pietro Martire d’Anghiera, better known by his Latinized name Petrus Martyr, the first historian of America, was born at Arona, in Italy, about 1455, and died at Grenada, in Spain, in 1526. He possessed eminent ability and learning, and is believed to have been the first writer to notice in his works the discovery of America by his countryman Columbus, as he is the first who published a treatise descriptive of the peculiarities of the natives of the New World. In 1483 he went to Rome where he became acquainted with Cardinal Ascanio Sforza and Pomponius Laetus, to both of whom many of his letters were addressed. He was extremely fond of letter-writing, and, having a wide circle of correspondents, it was no doubt owing to him that the news of Columbus’s discovery, which he probably received from the discoverer himself, became speedily known to a number of notable people outside of Spain. ​“In 1494 he was ordained priest and appointed as tutor to the children of Ferdinand and Isabella. Seven years later he was sent on a diplomatic mission to Egypt, an account of which he has given us in his Legatio babylonica. ​“He was the friend and contemporary of Columbus, Vasco de Gama, Cortés, Magellan, Cabot, and Vespuccius. From personal contact with these discoverers, as well as from his official position as a member of the Council for the Indies, which afforded him the free inspection of documents of undoubted authenticity, he was enabled to obtain, at first hand, much valuable information regarding the discoveries made by the early navigators. These facts he embodied in his Decade, which were based upon his extensive correspondence, but were written with more care and give more ample details. His works were held in the highest esteem by his contemporaries and have always been placed in the highest rank of authorities on the history of the first association of the Indians with the Europeans, and are indispensable as a primary source for the history of early American discoveries. ​“The earliest unquestioned edition of the First Decade was published at Hispalis (Seville), in 1511. It was reprinted with the Second and Third Decades, at Alcala, in 1516. These were reprinted at Basle in 1533, and again at Cologne in 1574. ​“The entire collection, consisting of Eight Decades, was not published until 1530, when it appeared at Complutum.”

Of this edition two issues are known, distinguished by the title-page leaf, of which there are two printings. In one issue, of which the present copy is an example, the title-page is worded and punctuated as quoted above, and the prefatory matter on the verso of the leaf comprises three headlines and twenty-five lines of preface. In the other, the title-page is worded and punctuated somewhat differently and the preface on the verso comprises two additional lines. The present copy is of the issue with the twenty-five-line preface and contains the two supplementary leaves, the first of which displays the full-page woodcut map on the recto. The three copies of the issue with the 27-line preface which were examined by Mr. Harrisse (Additions, No. 41), all of which were in the original vellum binding, did not contain the two supplementary leaves (usually between quires g and h) displaying the map, the epistle to Cardinal Ximenes, and the table of errata for the ​“First Decade”, and Mr. Harrisse, accordingly, concluded that this was the form in which the volume was first issued. There is, however, in the Lenox Library, a copy of this issue (with the 27-line preface) in the original vellum binding, which does contain the additional leaves.

One of thirteen known examples. No copy of this edition is recorded as having been offered for public sale in the UK or America since the Henry C. Murphy copy (Goelet 1935 — $2300) and, prior to that, the Harrisse-Barlow-Ives copy, which was sold at the Ives sale in New York, in 1891.

The other known examples are as follows: 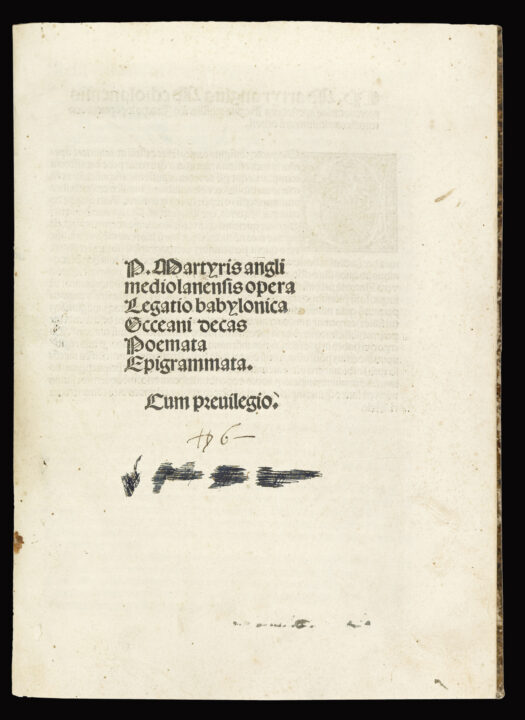