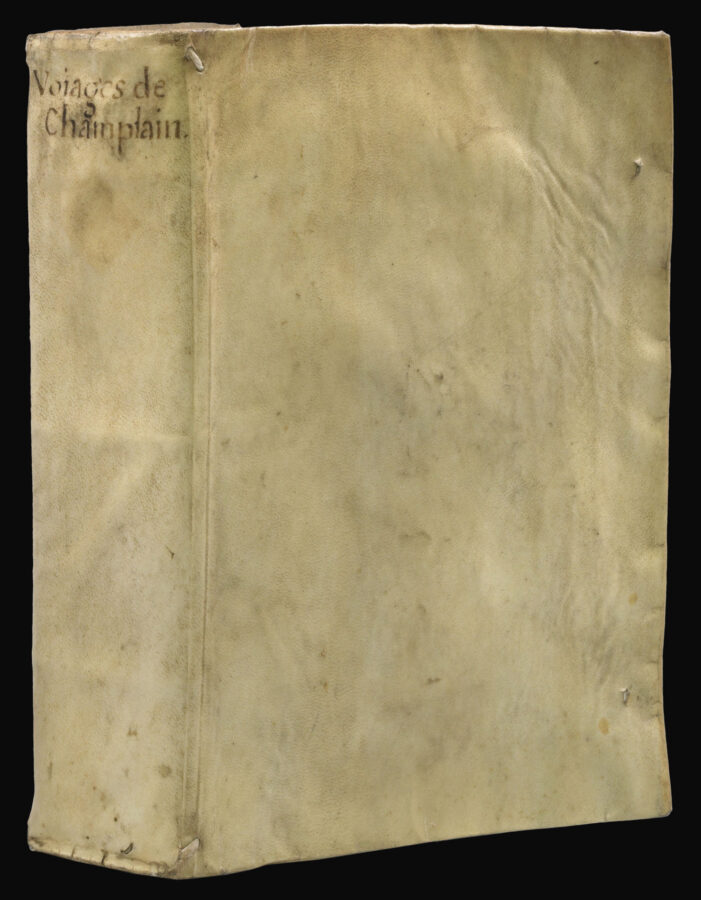 The first complete edition of the voyages of Champlain, here with the rare map

A superb example of the most complete edition of Champlain’s ​“Voyages…” with the important map of New France in the second state, with Cape Breton island including a chain of mountains rather than an inland lake, and a small circular unstippled area in the easternmost edge of the Grand Banks, which is rarely found intact; pages 27–38, Dii-Diii, in their second state without the inflammatory remarks found offensive by Richlieu.

​“Of all the editions of the book of Champlain, this is the most complete” (Leclerc).

​“It is perhaps the most important of the old editions, as it contains a collective narrative embodying a review of all preceding French expeditions to the New World, followed by and interwoven with Champlain’s own voyages to Canada: a short account of the First (1603), which had been published in 1604; and an abridgment of the Second, Third, Fourth, Fifth and Sixth (1608–1613), as they had been published in the volume dated 1613. These voyages end on p. 210. Pages 239–308 contain the Seventh Voyage (1615–1616), while the Eighth Voyage (1617) is only mentioned between pp. 211 and 214 as unimportant. The Second Part contains the Ninth Voyage and a History of Canada (1620–1631), pp. 1–310; a Treatise on Navigation, pp. 1–54; followed by the doctrine Chrestienne du R.P. Ledesme and l’Oraison Dominicale par le R.P. Massé, with separate signature-marks and pagination. This was the last of Champlain’s works” (Church).

​“This edition is the only complete one of Champlain’s voyages […]. The great map is printed here for the first time. An imperfect facsimile of the large map is usually substituted for the rare original […]. This work gives us the first accurate accounts we have of the Indians of the interior of the present state of New York. It is very largely devoted to descriptions of their habits, modes of life and warfare; and of personal observations and experiences among the Algonquins and Iroquois. The most remarkable event in Indian history was caused by Champlain’s first visit to the shores of the lake bearing his name. in a conflict between the two named races of savages, he gave the victory to his friends the Abnaquis, by the use of his musket. The Iroquois never forgave the injury, and thousands of Frenchmen were slaughtered to avenge it” (Field).

Samuel Champlain, founder of Quebec and governor of Nouvelle France, was born around 1570 in Saintonge to a Protestant family. He served Henry IV during the later stages of France’s religious wars in Brittany. After the peace of 1598, the commander of Chaste and governor of Dieppe, having obtained from Henry IV a commission to establish new settlements in North America, asked Champlain to join him in this great undertaking.
Champlain embarked from Honfleur and anchored the 24th of May 1603 at the port of Tadouzac, situated in the St. Lawrence River. Here he left his ship and took a small boat to Fort Saint Louis, where Jacques Cartier had ended his last voyage; he then journeyed into the interior and drew up the map which he would bring back to France with a detailed account of his voyage.

Champlain returned to the new world and stayed for three years on his second voyage. He made numerous explorations of the coasts and the interior, all of which he recorded in his Voyages.

Returning to France in 1607, Champlain stayed only six months before setting off on his third voyage, now with the titles of Geographer and Captain in the King’s navy. This third expedition was the most important. Returning to the St. Lawrence with the intention of forming a permanent Canadian settlement, he chose an area near the mouth of the river. In 1608, he lay the foundations for the city of Québec. The following year, Champlain made several excursions on the St. Lawrence, supporting the Algonquins against the Iroquois, and proving victorious, gave his name to the lake on the coasts of which the battle was won; he then went down the river which connected Lake Champlain to the St. Lawrence, and named the river the Richelieu. He then returned to Quebec, and from there, to France.
On his return to Canada in 1610, he again battled the Iroquois. Encouraged by his discovery of the Hudson, he attempted to discover a route through North America to China. His first excursion, on the river Ottawa, failed, and he was forced to return to France, to men for his next expedition. In 1615, he brought with him four Recollects to further religious life in the new colony. Then, resuming his attempt to discover a Northwest Passage, he again went up the Ottawa River, and, advancing both by land and canoe, he reached Lake Huron; he sailed along its southern shore, then continued across the plains to Lake Ontario, which he crossed.

After helping the Hurons fight the Iroquois, he spent the winter amongst the native Algonquins, whose culture and language he studied. He left them in 1616, and returned to Europe the following year.

In 1620, he returned again to Canada, for the fifth time, with the title of Lieutenant General Du Marechal de Montmorency, Vice-Admiral de la Nouvelle-France.

​“After the treaty of Saint-Germain-en-Laye (1630), France took possession of Canada, and Champlain was sent as its governor in 1633. It was at this time that the country had its most considerable achievements: it was due to the courage of Champlain, his enlightened administration, and his perseverance to overcome all the obstacles, that France was able to successfully establish its new colony. He quickly turned Quebec into a thriving city, helped by the Indians which he was able to ally, and over which he led a great empire. During the short domination by the English, the natives were withdrawn and avoided any communication with them; when peace brought back the French, one saw the Indians rush to them and renew their interrupted relationships eagerly. Champlain died in Quebec, surrounded by the esteem and veneration of all. He left his Traite de navigations, published in 1632, and his accounts of his voyages, which comprised all of his navigations and discoveries between 1603 and 1629” (Pierre Larousse).


C.L. Theroyenne, renowned collector of coins and medals, inscription dated 1636 at the foot of the title-page. 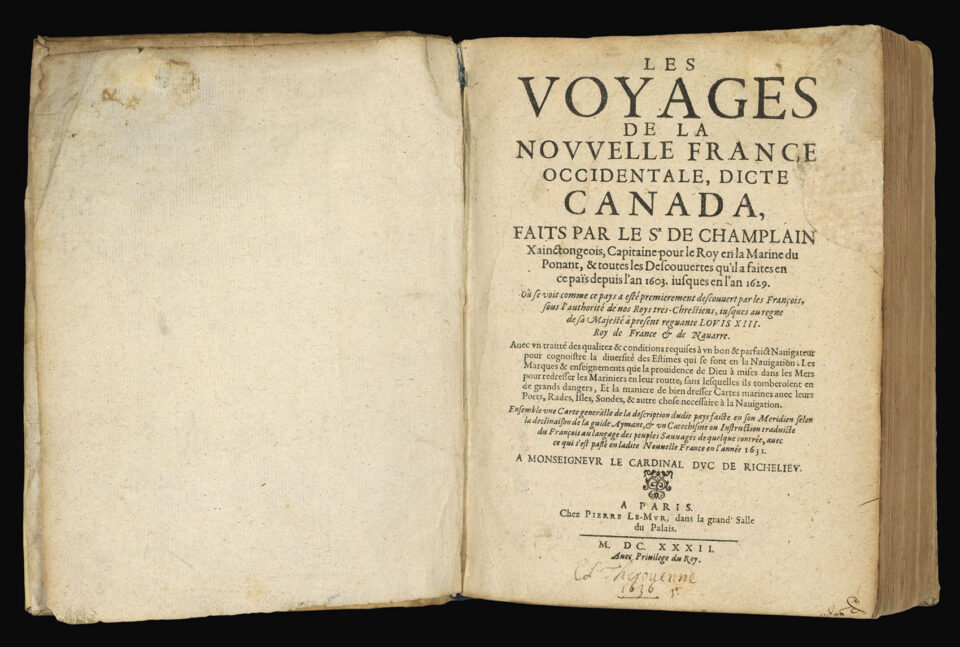 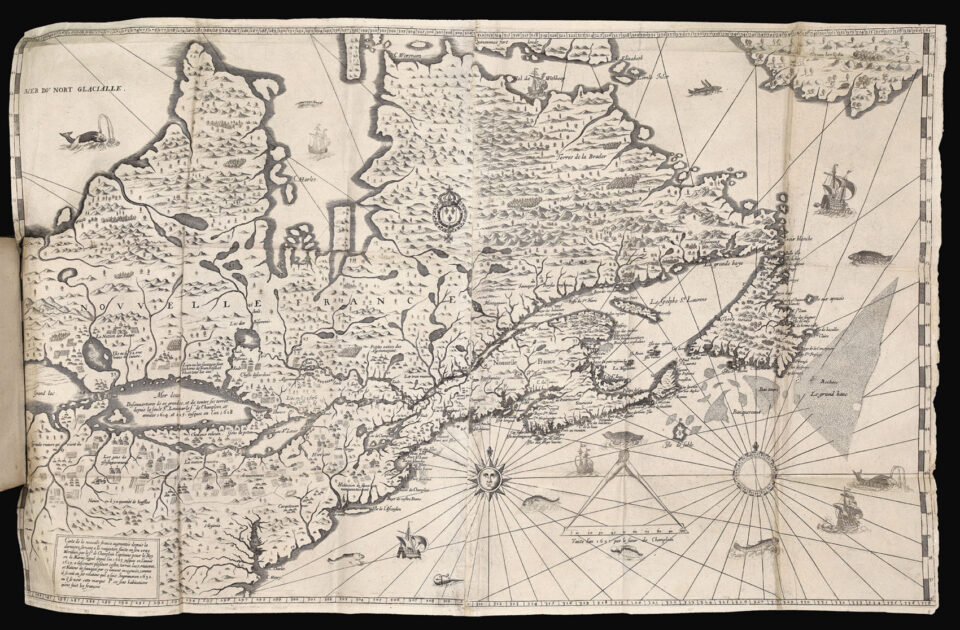