The first complete chart of the Australian continent

By PERON, Francois and FREYCINET, Louis, 1807

A complete set of this important French scientific voyage, together with the navigation text volume and the folio atlas, which was issued separately.

The expedition was sent by Napoleon Bonaparte in 1800 to complete the discovery of Terra Australis with two ships, Le Geographie and Le Naturaliste, under the command of experienced captain Nicolas Thomas Baudin (1754–1803). The original purpose of the voyage was to examine the Australian south coast in order to find a strait which supposedly divided the Australian island in two halves. The French zoologist François Auguste Péron (1775–1810), who had studied under the anatomist George Cuvier in Paris, was the naturalist of the expedition, and Louis Claude de Saulses de Freycinet (1779–1820) served as cartographer.

Flinders and Baudin’s circumnavigation of the Australian Continent was happening at the same time, and they met each other in the consequently named ​“Encounter Bay”. Although Flinders completed the task before Baudin, he was captured and imprisoned for six years at Mauritius on his voyage home, along with his charts and manuscripts. This allowed the French explorers to print their account of the new discoveries before Flinders, and to produce the first complete chart of the Australian continent in 1807.

The maps and charts prepared by Freycinet entirely ignored the discoveries of Grant and Flinders and depict the whole of the newly discovered coast of Melbourne to the border of Western Australia as the ​‘Terre Napoleon’.

When Baudin died during the voyage in 1803, Freycinet took over command and brought the expedition back to France. On the return of the expedition, Péron was charged with producing the narrative for publication. However, he died in 1810 before the second volume had been finished, with the result that the work had to be completed by Freycinet. Baudin had failed as a leader during the expedition: 46 sailors and ten scientists deserted due to quarrels, illness, and poor conditions, and the primary goal of the expedition (to explore the south coast) was not accomplished.

Despite the lack of respect for their leader, Baudin (neither Péron nor Freycinet mention his name), the work became an outstanding example of a description of an exploratory expedition, including extensive descriptions of Timor and Sydney, where the expedition stayed over six months. The atlas volume contains two fine views of Sydney, one double-page, and a double-page view of Timor. In addition to these views, and the large map of Australia by Freycinet (1808), the atlas is noteworthy for its 23 full-page plates of native people of Africa, Timor, and Australia (15 of which are hand-coloured), and 35 plates of weapons, houses, utensils, and animals.

​“The journals of this expedition are among the finest items of Australiana ever published” (Davidson). 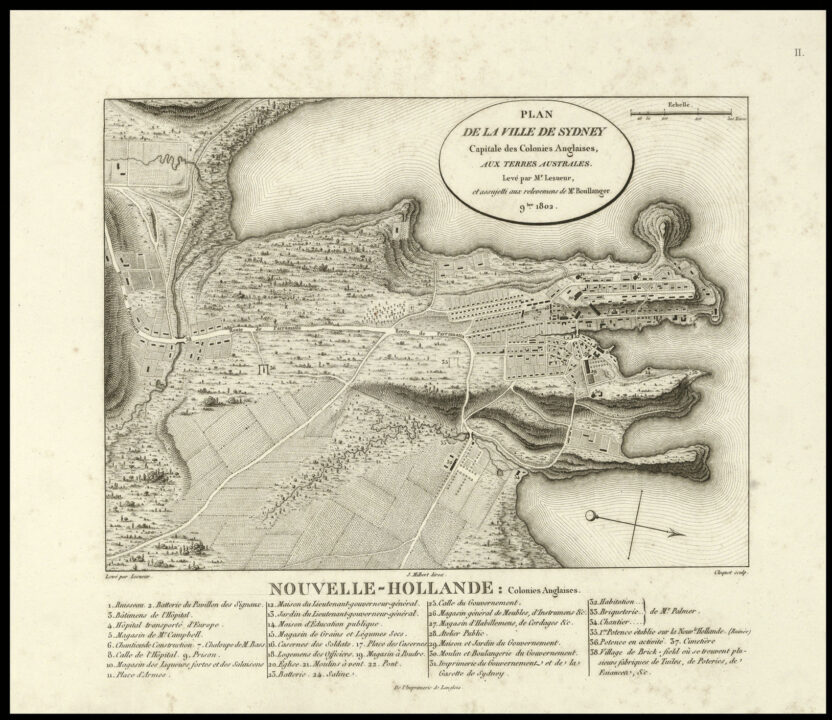 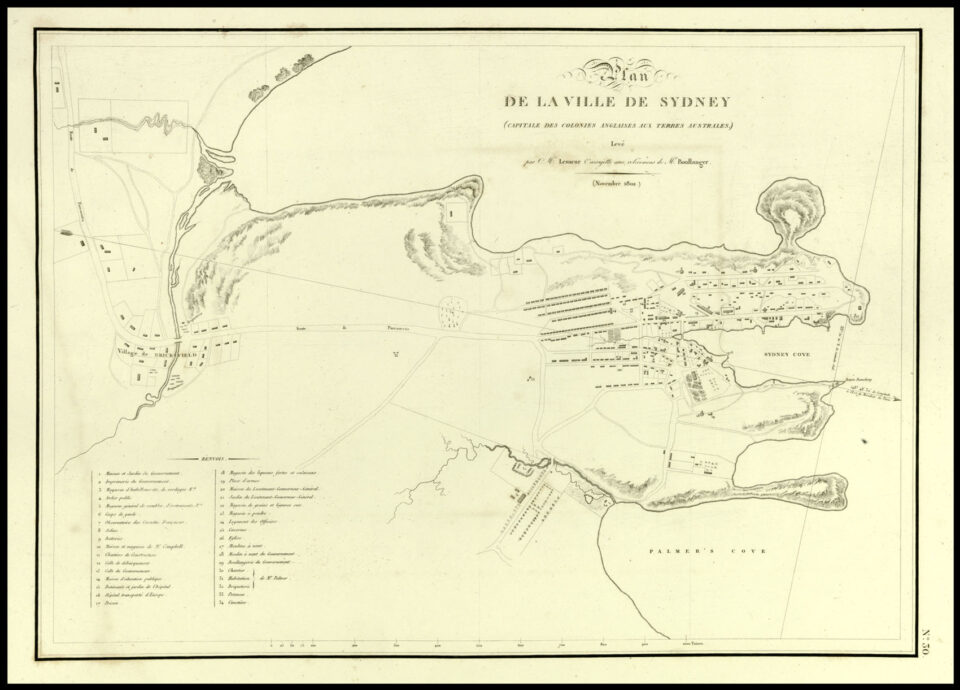