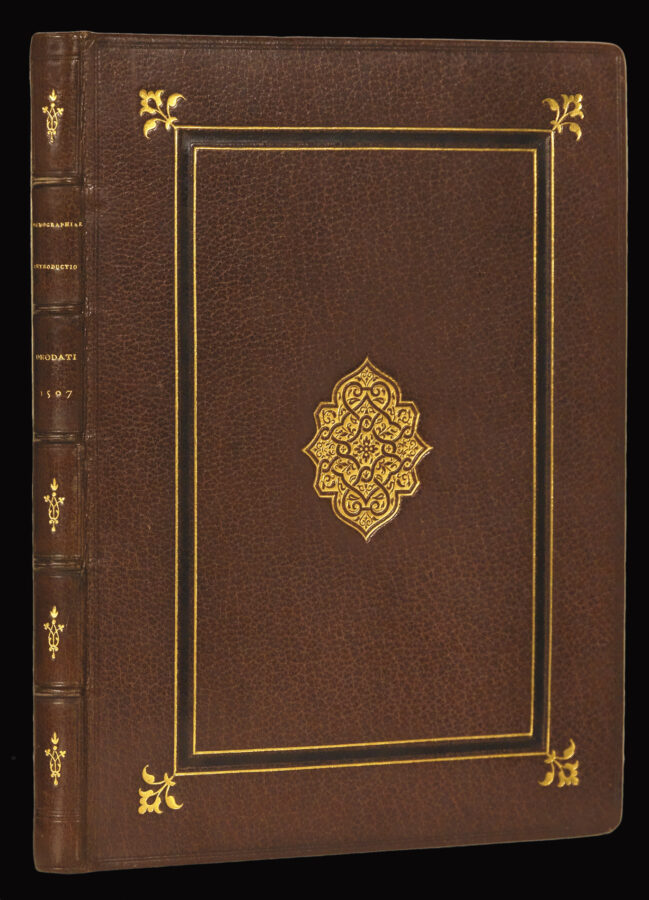 The first book to name America

A work of fundamental importance for the history of the Americas.

It was Waldseemüller’s work which for the first time proposed the name ​“America” for the newly discovered continents; it was written to accompany his small woodcut Terrestrial Globe and a large World Map printed from woodcut plates, which were in fact the first maps to bear the name ​“America.“

The first text, an elementary treatise on geography and the globe, begins with a dedication to the Emperor Maximilian I, which is followed by nine chapters, giving definitions of technical terms used and of the terrestrial and celestial zones, descriptions of the winds, and, in the last chapter, brief descriptions of the continents and other geographical features of the earth’s surface. It is in this chapter that the name ​“America” is proposed for the new world; ​“in the sixth climatic region, towards the Antarctic, are situated the extreme part of Africa, recently discovered, the Islands of Zanzibar, Java minor and Seula, and the fourth part of the world which, since it was discovered by Amerigo, it is permissible to call ​‘Amerigen,’ that is, land of Amerigo or America.” (f. C3v). We may note that he firmly attributes the discovery of America to Vespucci and ignores Columbus.
Waldseemüller refers throughout to his large map and his globe, which we know from contemporary references were both published some time during the spring or summer of 1507. On the title, for instance, is noted ​“a representation in three dimensions and plane (“descriptio tam in solido quam plano”); on D3r he says ​“nos in depingendis tabulis typi generalis”, from which we know he was referring to a map on several sheets; and on the verso of the double-page folding planisphere he gives many details of the globe and the large map. Only one (later) copy of the large map and two copies of the gores for the little globe have survived; the text volume has fared somewhat better, though all editions are also very rare.

The Cosmographiae Introductio first appeared on 25 April 1507 and it is known in three editions. Two are dated 25 April. (vii Kal. Maij) and the third is 29 August (iiij Kal. Septe[m]bris). It was earlier thought that there was at least one other edition dated 29 August, but this mistake arose from the fact that copies exist, such as the present example, which are formed by combining the leaves of the three editions.

The Four Voyages first appeared in Italian, but its text was interspersed with Spanish and Portuguese words. Studies by several different scholars have now established that it was printed in Florence between 1505 and 1506 for the bookseller Pietro Paccini. This Latin translation was made by Jean Basin, one of the scholars of the Vosgian Gymnasium (St. Dié is in the Département des Vosges); other members of the group included Vautrin and Nicholas Lud, Philesius Ringmann and Martin Waldseemüller himself. However, according to Alberto Magnaghi in his Amerigo Vespucci, studio critico (Rome, 1926) this work is of doubtful authenticity because of numerous incongruities and inconsistencies in the text. Magnaghi is led to the conclusion that Vespucci actually made only two voyages, the first with Hojeda in 1499 during which they sailed down the South American coast from the Guianas to Latitude 6 degrees South; and the second in 1501 at the expense of the King of Portugal when he followed the Brazilian coast down to 50 degrees South. Whatever the true interpretation may be, this work remains very scarce and desirable in any 1507 edition.

The marginal manuscript explanations appear to be that of a late sixteenth century Dutch scholar (he uses Dutch words for the Latin wind names and shows no interest in the section on the
naming of America, presumably as this was not new information to him). The annotator shows particular interest in ethnographical details of the New World, remarking on the presence of cannibals, the fact that the people in the New World make a bread from fish, and a wine from fruit, that they cover themselves with large leaves, and that they paint their bodies when they are ready for battle; he emphasizes a passage in which Vespucci and his men are treated well by the natives, but beside a passage in which Vespucci and his men are attacked, he writes ​“Nota crudelitatem.“

The reader highlights a few passages that mention pearls, but makes no annotations by the few passages in Vespucci that mention gold. The only other New World commodity that attracted his attention was the cassia trees. He was more interested in Vespucci’s report of an island of giants, and lizards with forked tails. The book also contains several corrections of typographical errors by the reader.

The most interesting marks by the reader are those on the verso of the fold-out. He underlines Waldseemüller’s description of his use of different symbols on his 1507 map to designate the political affiliations of different areas, such as a red cross to mark the areas allied with Prester John. This suggests that the reader of the book may have been consulting it in conjunction with the 1507 map, which, if correct, would be very interesting evidence of the reception of the 1507 map, particularly in the latter part of the sixteenth century.

The monastery of Sint-Truiden, the Netherlands. Martin Waldseemüller was a German scholar and cartographer. He studied under Gregor Reisch at the University of Freiburg, and then moved to Basel in the late 1490s, where he met the printer Johannes Amerbach. In 1506 he moved to Saint-Dié in Lorraine, where Duke René II had established a humanist academy, the Gymnasium Vosagense. Waldseemüller was one of the earliest members, providing expertise in both cosmography and theology. It was at the Gymnasium that he met Matthias Ringmann and Jean Basin de Sendacour, with whom he would collaborate on his greatest geographical work. The trio had originally aimed to produce a new edition of Claudius Ptolemy’s Geographia, inspired by the versions already published throughout Europe. However, this idea was abandoned after they read about Amerigo Vespucci’s voyage to the Americas. Together with Portuguese accounts of circumnavigating Africa, proving that the Indian Ocean was not landlocked, they dealt a serious blow to Ptolemaic geography. Instead, they decided to create a map which compared Vespucci’s geographical information with Ptolemy’s, along with an explanation of why they had deviated from Ptolemy’s precepts.