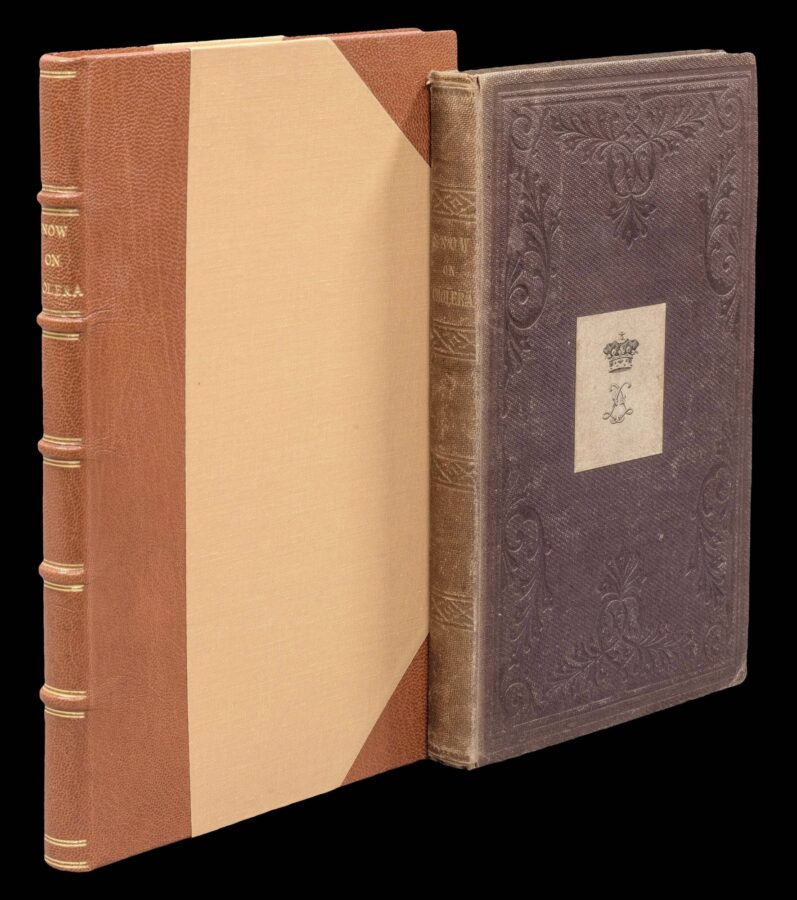 The first and second editions of Snow’s famous epidemiological work, inscribed, and from the library of the Right Honourable Sir Robert Peel, Prime Minister.

A classic of cartographic data visualisation, and one of the earliest epidemiological maps.

First edition, inscribed by John Snow, of his first published work on cholera, in which Snow advanced his theory that the disease was caused by contaminated water, together with the second and much enlarged edition of the same work in which he proved his hypothesis by means of a brilliant series of observations and statistical analyses, including his famous map of the area surrounding the Broad Street Pump in Soho, London.

The first edition, here, is bound with an extremely rare broadside relating to a cholera epidemic in Edinburgh in 1832.

In his brief pamphlet of 1849, Snow first voiced his theory that cholera is an infectious disease of the alimentary canal and is transmitted through the ingestion of faecal matter from infected patients, mainly through contaminated water. Snow provided evidence for his theory by correlating data on a large number of cholera outbreaks with information on their local supplies. His proposition, developed at length in a series of journal articles, met with opposition from physicians who still subscribed to the traditional ​‘miasma’ theory of infection. In the second edition, which contains the substance of all of Snow’s articles published since the first edition of 1849, ​“together with much new matter” (Preface, p. iii), Snow provides detailed historical and statistical evidence for his conviction that cholera is a contagious disease that is communicated primarily through contaminated water. His examination of the patterns of infection of the London epidemics, correlated with a survey of the water sources in each neighbourhood, was particularly conclusive. ​“In the great London epidemic of 1854, Snow’s genius as an epidemiologist and statistician reached fruition. By meticulous survey he established [in the 1855 work] that the areas supplied by water from the Southwark and Vauxhall Water Company, obtained from the faecal-contaminated Thames, were infected nine times more fatally than the areas supplied by the Lambeth Company, which supplied water from an upstream source. Even more dramatic was the affair of the Broad Street pump [first described in the 1855 work], which he showed by careful plotting to be in the center of a cholera outbreak in his own parish of Soho. Within a few hundred yards of this pump, some five hundred fatal cases occurred in ten days. Snow found that a sewer pipe passed within a few feet of the well, and his belief that contaminated water was the source of infection was vindicated when he persuaded the parish councillors to remove the pump handle” (DSB), resulting in a dramatic drop in the number of cholera cases. The first map in this edition, showing the Broad Street district with its pumps, with bar-symbols symbolizing each cholera victim, graphically documents Snow’s finding; it is the first use of a spot map in epidemiology. ​“Snow’s writings and practice were a very considerable influence upon the great sanitary reformers such as Sir John Simon and Sir Edwin Chadwick in the later part of the century” (DSB).

Our copy of Snow’s 1849 pamphlet is bound with a broadside of the Edinburgh Board of Health signed by John Learmonth (1789–1858), who was Lord Provost of Edinburgh (similar to the position of Mayor) from 1831 to 1833 (Edinburgh: Neill & Co., n.d. [1832]). It is a list of recommendations, intended for the working-classes, for combatting the cholera epidemic which Edinburgh was then suffering, and gives an interesting picture of the measures taken by the public authorities against the disease in the decades before Snow’s discoveries, when the disease was widely believed to be airborne rather than waterborne. The measures recommended are eerily reminiscent of those being used against the COVID-19 pandemic today.

​“The Epidemic Cholera having now shewn itself in Edinburgh, the Board of Health earnestly request the attention of the Fellow-Citizens, especially of the poorer classes, to the following instructions, which are drawn up solely for their benefit, and are founded on the experience of other towns where the disease has prevailed.”

The recommendations which follow include not eating or (especially) drinking to excess, staying indoors after dark, and not assembling in crowds.

In his second report to the Edinburgh Board of Health, Learmonth had written:

​“Immunity among the upper ranks [of society] will depend in a great measure on the disease being kept within moderate bounds among the lower orders. A short printed statement of the points to be attended to by the lower orders will be extensively circulated among them” (The Cholera Gazette, London, January/​February 1832: February 11, 1832 issue, p. 111).

This last sentence may well be a reference to the broadsheet found here. We have been unable to locate any other copy.

The map (commonly known as ​‘Snow’s cholera map’) consists of a base map originally drawn by the renowned mapmaker Charles F. Cheffins on which Snow added a total of 578 victims’ locations and an equidistance line around the areas served by the Broad Street pump as their closest water source. It clearly illustrates the concentration of victims around the Broad Street pump location, which served as an effective means for Snow to communicate his results to the Cholera Inquiry Committee and it is for this reason that his work has been seen as a pioneering example in the field of spatial epidemiology.

In 1849, Snow published an article entitled ​‘On the pathology and mode of communication of cholera’ in the London Medical Gazette. The Norman library catalogue incorrectly stated that this has priority over the 1849 pamphlet offered here, but this was corrected in the Norman library sale catalogue: ​“The text of the present monograph is dated August 29, 1849; in it Snow states (on pages 12 and 30–31) that this is his first publication on the subject. This edition thus pre-dates the journal article in the London Medical Gazette, published in November of the same year, which contains references to a lecture given on August 30th (p. 4), and which includes more detailed and more broadly based evidence for his theory.“

Born into a working-class family in York, Snow was trained by apprenticeship to general practitioners and some courses in medical schools in north-east England, with little financial backing. He nevertheless based his career in London. He set up a general practice, worked in the outpatient’s department at Charing Cross Hospital and became medical officer to several convalescent homes set up by working men’s clubs.
London suffered three severe cholera epidemics during Snow’s lifetime, in 1832, 1848–49 and 1853–54. 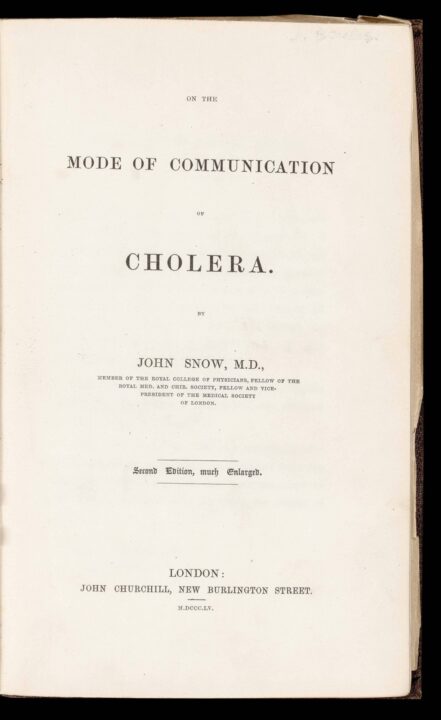 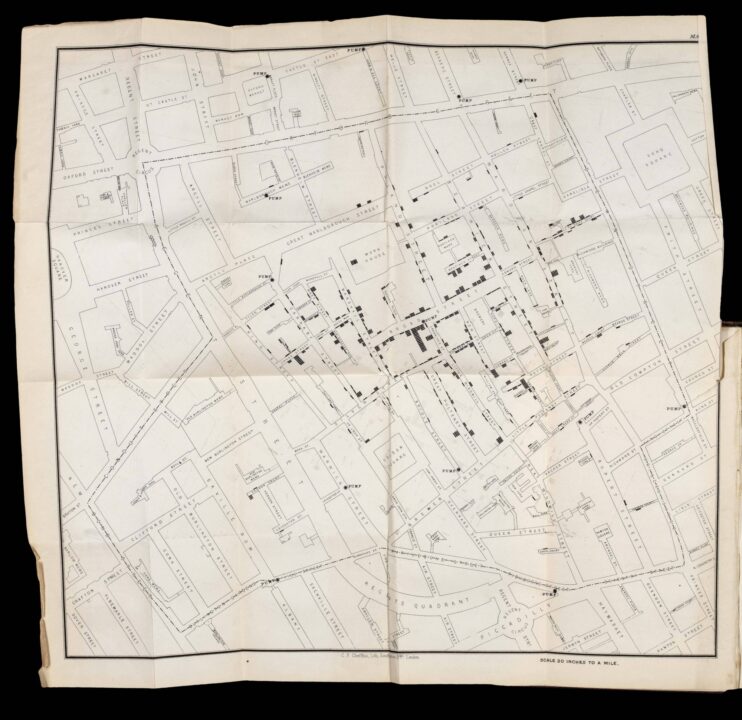 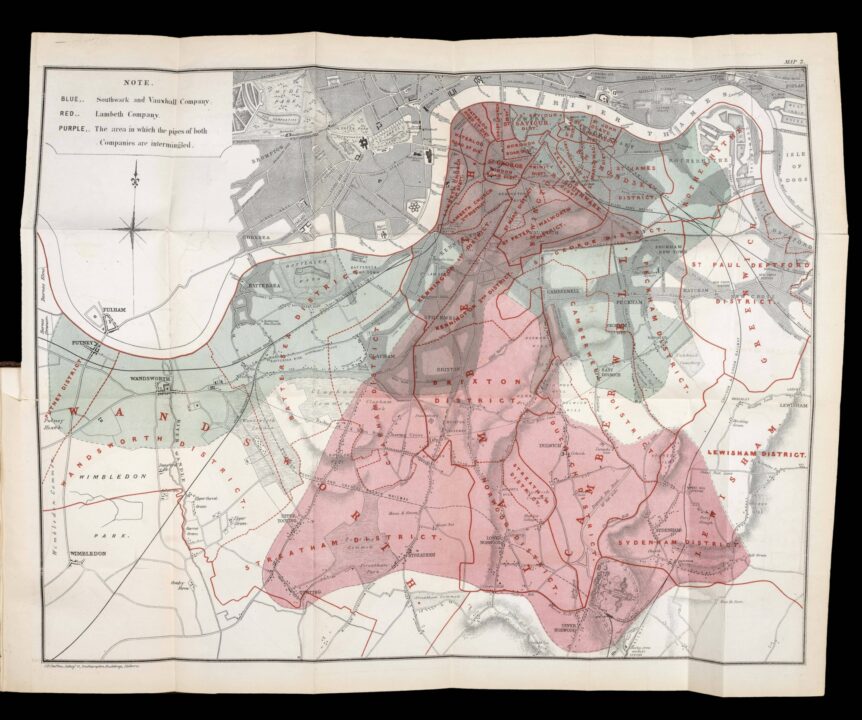 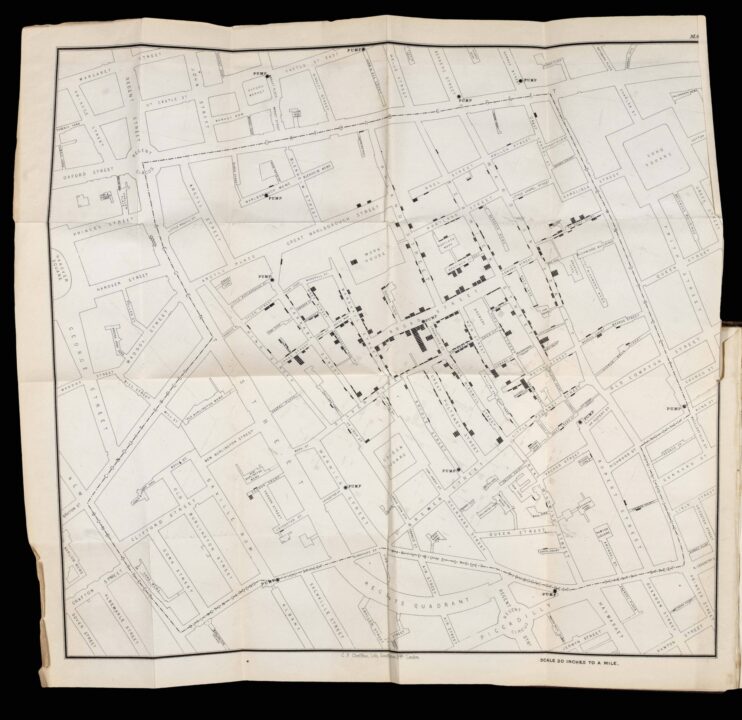 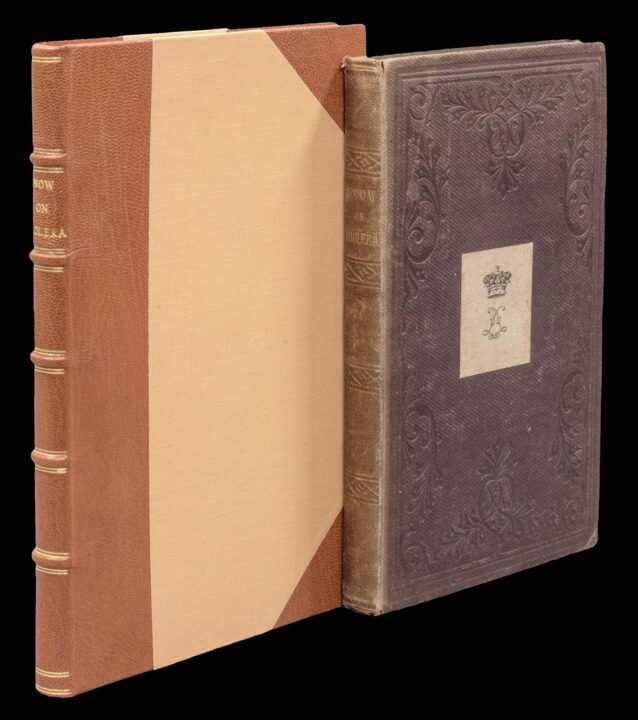 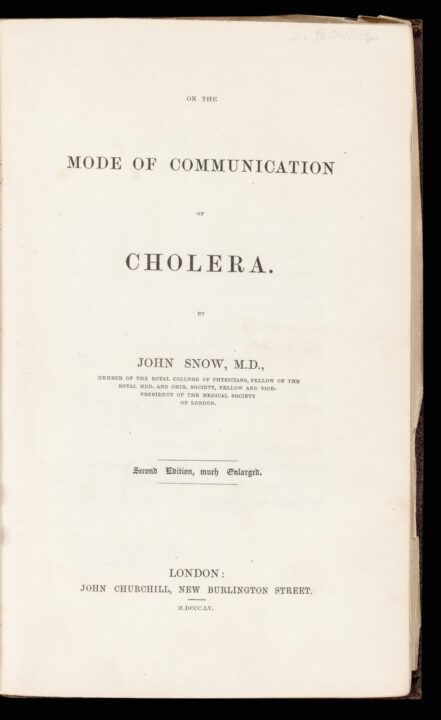 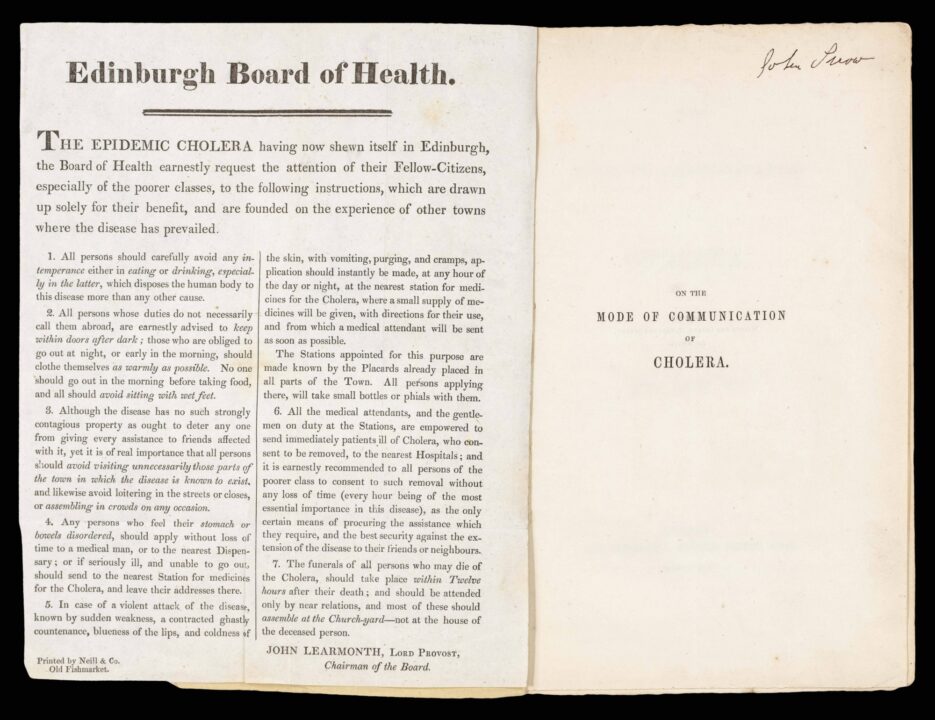 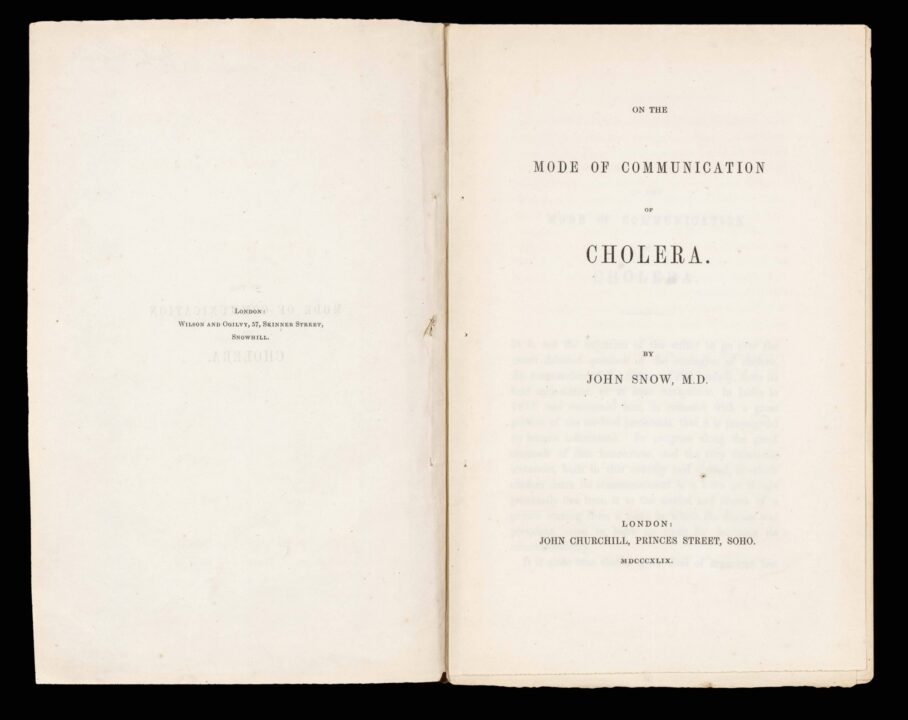 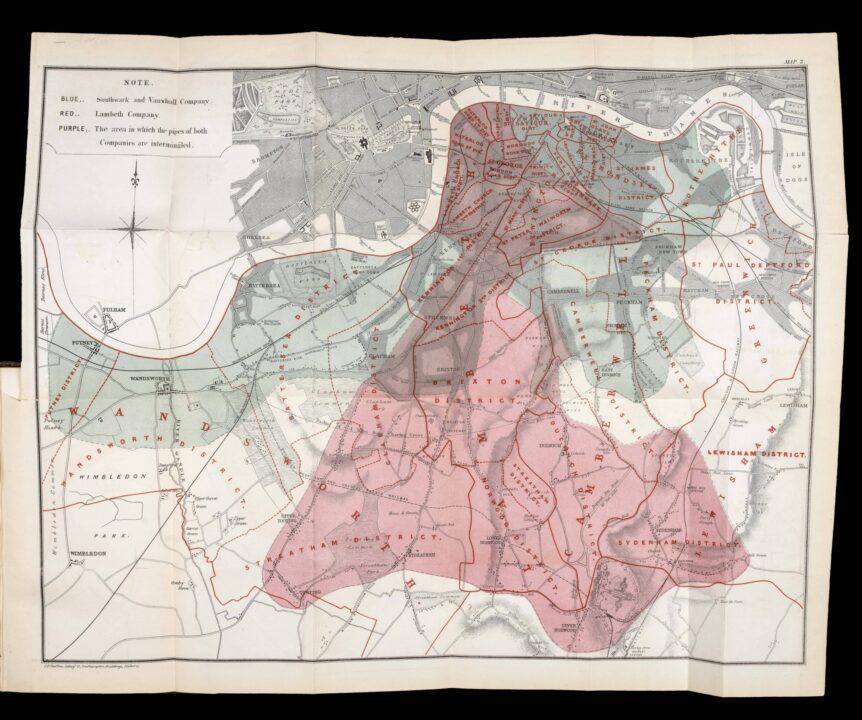