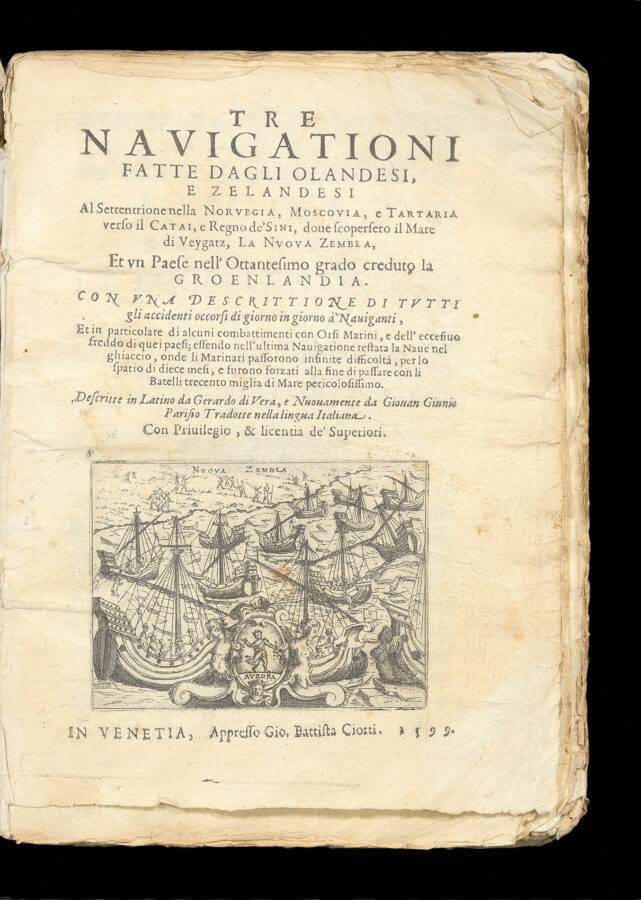 Rare first edition of the Italian translation by Giovanni Giunio Parisio of this classic account of the voyages in search of a northeast passage to China by Willem Barentsz. The third voyage is by far the most famous: the ​“Overwintering on Nova Zembla” is a truly irreplaceable part of Dutch national history.

During the late sixteenth century, the Dutch Republic began to trade more and more with East Asia. The established route to Asia, however, was under the control of their enemies, the Portuguese. It was also long and difficult to navigate, and it was thought that a polar route might be quicker. Barentsz thought such a passage would be viable because he believed that the polar regions above Siberia would be open water, and that prolonged exposure to the sun at the poles would melt any ice there. This assumption would prove fatally incorrect.

Barentsz led three expeditions in search of this passage. The first, in June 1594, reached the coast of Novaya Zemlya, becoming the first Europeans to document an encounter with a polar bear. In 1595, Prince Maurice of Orange commissioned a second expedition, which was forced to turn back when they found the Kara Sea iced over. The third and final expedition was in 1596. The expedition discovered Spitsbergen in the Svalbard Archipelago, which would become a centre of the whale trade after their return, and eventually reached Novaya Zembla on July 17. Barentsz’s ship was then stranded by pack ice. They were so confident that the pole would be covered by clear water that de Veer writes that when they first saw icebergs they thought they were swans. The sixteen man crew was forced to winter at the North Pole in a wooden hut made out of timber from the ship. They suffered through every kind of danger: fighting off hungry polar bears; using cannonballs as hot water bottles; accidentally filling the hut with carbon monoxide after stopping up the chimney for warmth. When spring came and the ice melted, the crew set out in two small boats on June 13, with Barentsz dying from scurvy a few days later. Seven weeks later, the remainder of the crew reached Kola and were rescued by a Russian merchant ship. The crew made it back to Amsterdam in November 1597.

Gerrit de Veer, who had taken part in the second and third voyages and was a close friend of Barentsz, wrote an account of his experience after he returned. The work was immensely popular, both for the story and for the lavish illustrations and maps of the Arctic. The first edition of the original Dutch text with the 31 plates on separate leaves was published in Amsterdam by Cornelis Claesz. in 1598 under the title Waerachtighe beschryvinghe van drie seylagien … (Tiele 1129). This Italian translation, made by Giovanni Parisio after the Latin translation, was published in Venice in 1599 by Gio. Battista Ciotti, who also signed the dedication to Gaspar Catanei, a judge in Padua. In the same year this edition was also published with another title-page by Jeronymo Porri & comp., also in Venice. 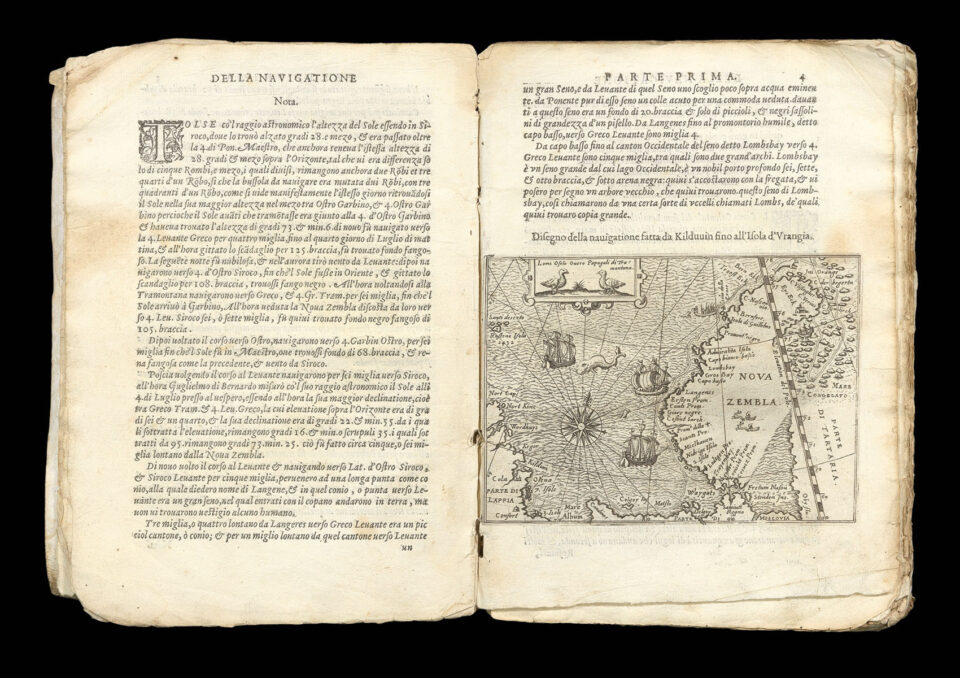 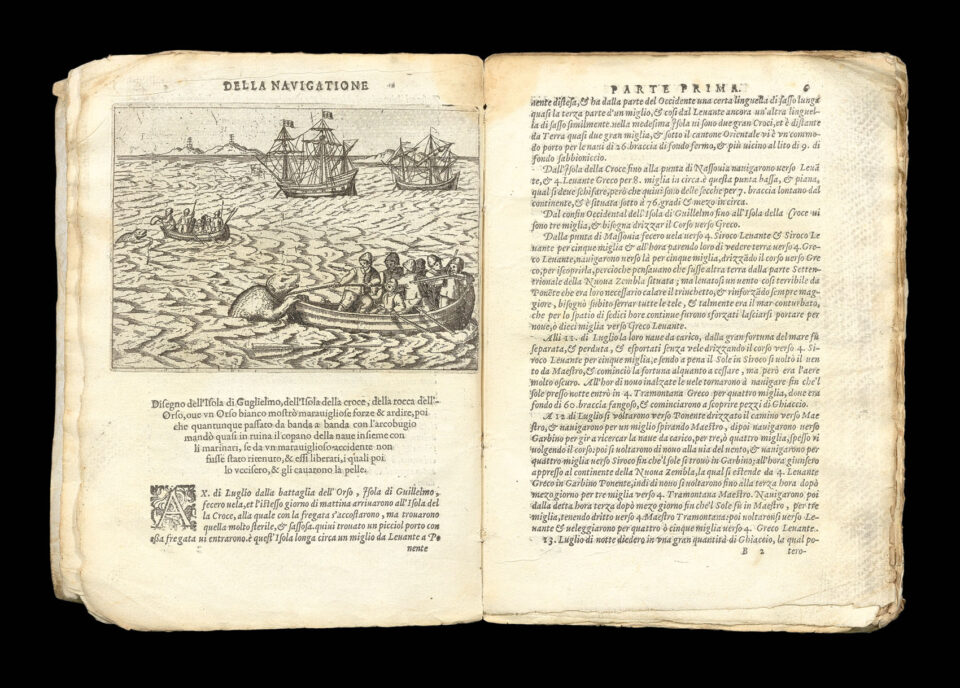 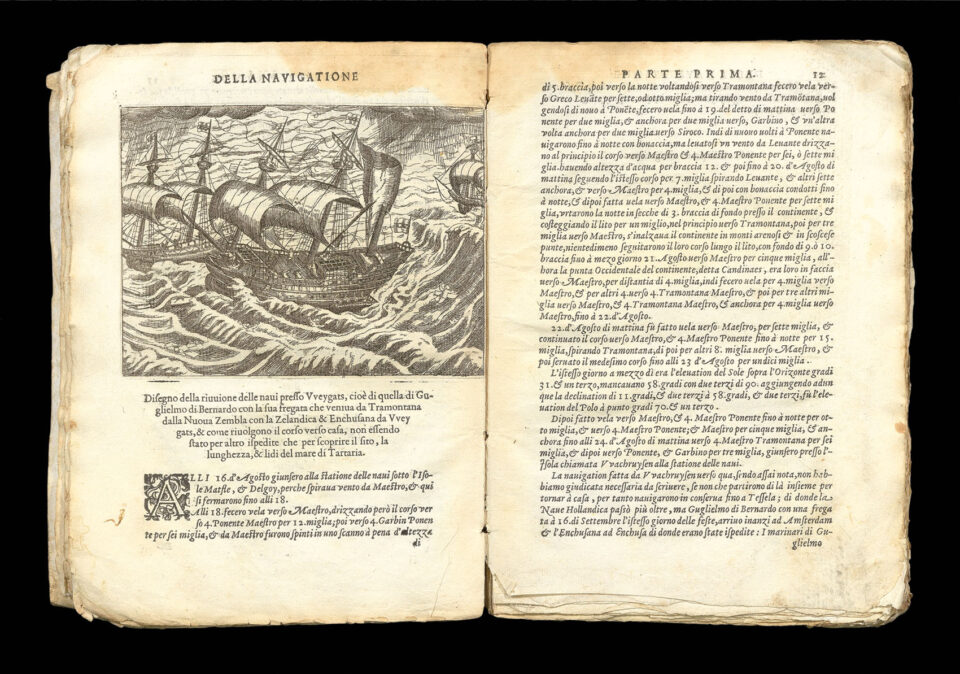