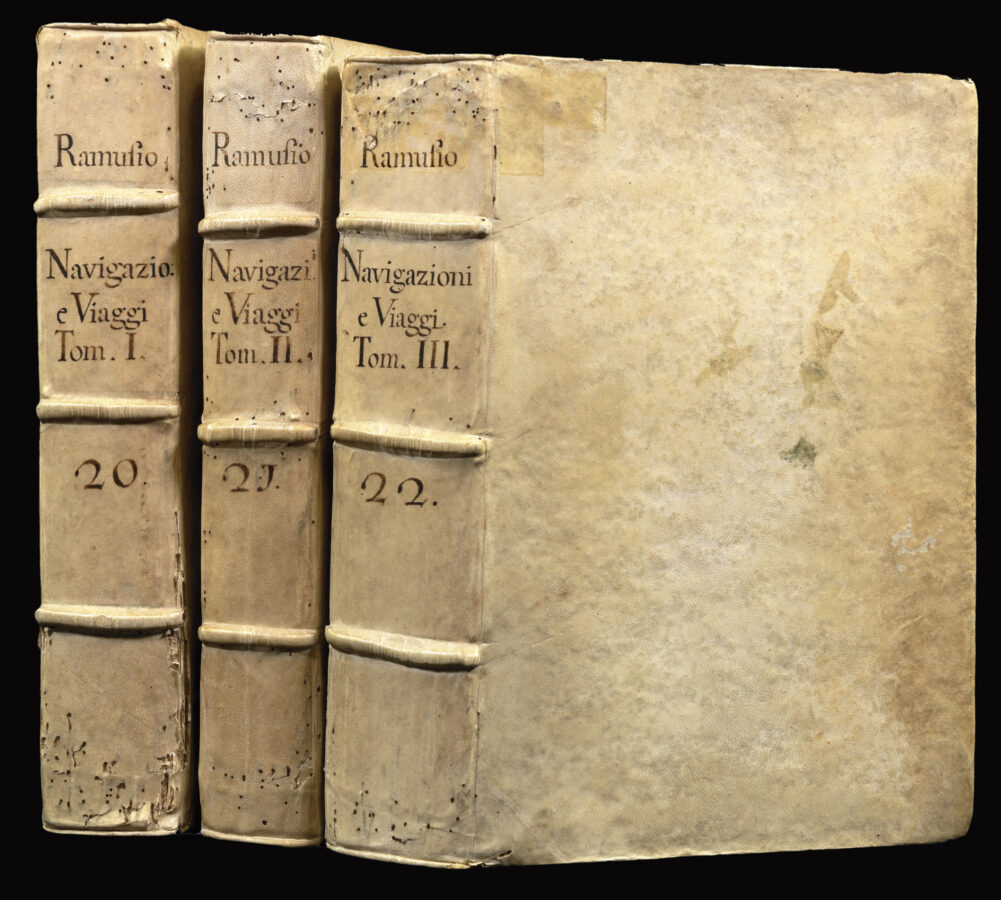 “This is one of the earliest and most important collections of voyages and travels and may be said to have opened a new era in the literary history of voyages and navigation. This work served as a model to Hakluyt and was the first great systematic collection that had so far appeared… It contains translations of works that had appeared previously in French, Latin, and Spanish, as well as some from manuscripts which had never before been published. Among these voyages are some of which no other editions have ever been found so that Ramusio remains an authority of the first importance” (Hill).

Giovanni Battista Ramusio (1485–1557), an Italian editor and secretary of the Senate in Venice, was pre-eminent in sparking popular interest in European exploration of the rest of the world by compiling, in one language, accessible accounts of the most important expeditions since the late fifteenth century, including those of Columbus, Vasco da Gama, Cortez, Coronado, Cartier, Cadamosto, and many others.

The first volume, inspired by a desire to correct the errors in Ptolemy’s maps, is mainly devoted to Africa and the East, especially the annals of early Portuguese exploration, including Da Gama, Alvarez, and Barros, as well as an account of Pigafetta. This edition contains the five letters on Japan, written in 1549 and 1550 that represent ​“the first time that Japan makes a significant appearance in travel literature” (Donald F. Lach). The first volume also includes an Italian version of Varthema’s Itinerario which, when it was first published in 1510, contained the first printed material on Southeast Asia.

The second volume concentrates on northern and western voyages including the new Russian state, recently released from Mongol domination. The contributors include Paulus Jovius (1483–1552), a correspondent of Barros and a former ambassador to Russia, regarded as an authority on Muscovite matters in general. The volume also contains Ramusio’s version of Marco Polo, which, whilst probably translated from the Portuguese edition of Valentin Fernandes (Lisbon, 1502), remains one of the basic extant versions of Marco Polo’s book.

The third volume is entirely devoted to America, and is a foremost authority on the early history of the continent. It includes accounts of Peter Martyr, Oviedo — including the first publication of his book XX — Cortes, Cabeça de Vaca, Guzman, Ulloa, Coronado, Fray Marcos di Niza, Xerez, Verrazano, and Cartier. The Western Hemisphere map in the third volume is the product of collaboration between Ramusio and Oviedo and depicts Japan with two islands. The final section on New France is remarkable, being the first general publication of Cartier’s Canadian experiences. Gastaldi’s map of New France is the earliest printed map focusing on what is now northeastern Canada and the United States. It is largely based on the voyages of Cartier and Verrazzano. The Hudson River, the St. Lawrence River, and the islands near the Gulf of St. Lawrence are the most prominent features, along with a curious snake-like projection in the Atlantic Ocean that has been the subject of much speculation. It is probably an attempt to depict the Grand Banks. The depiction of the area between New York Harbour and Narragansett Bay is based on the voyage of Verrazzano in 1524. The area around New York Harbour is named Angoulesme. The large bay to the east of New York Harbour is probably Jamaica Bay, which was more open to the ocean at that time. Long Island, which Verrazzano thought was a peninsula, is labelled Flora. The Hudson River is shown joining the St Lawrence. Rivers crossing watersheds like this appear on several early maps of the Northeast. This curious feature may derive from the use of information gathered from Native American informants as some early maps drawn by American Indians show canoe routes, and do not distinguish between waterways and portages. Ramusio’s death in July 1557, together with a fire at the Giunta presses in November the same year, prevented the production of a fourth volume. Nonetheless, Ramusio’s works up to this date “…open an era in the literary history of voyages and navigation” (Harrisse) and are widely acknowledged as ​“the definitive geographies of the sixteenth century”. 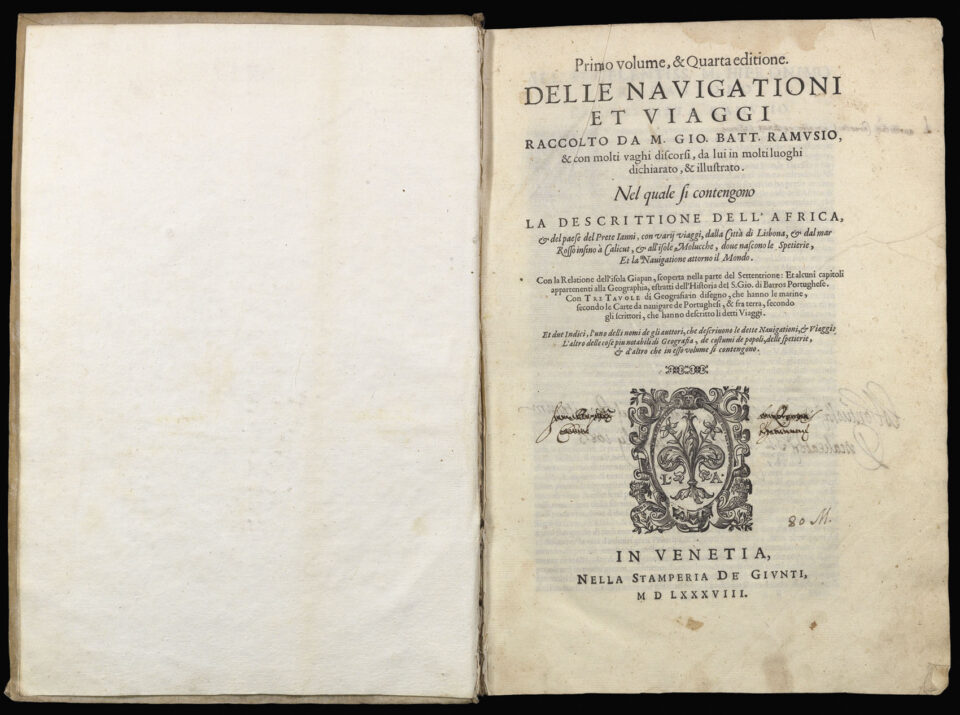 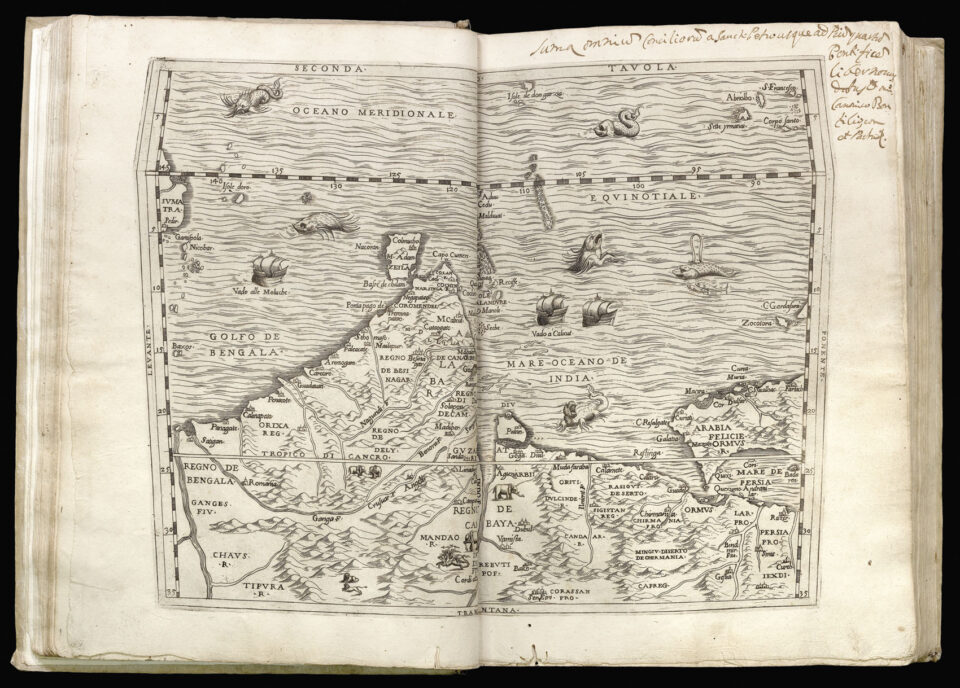 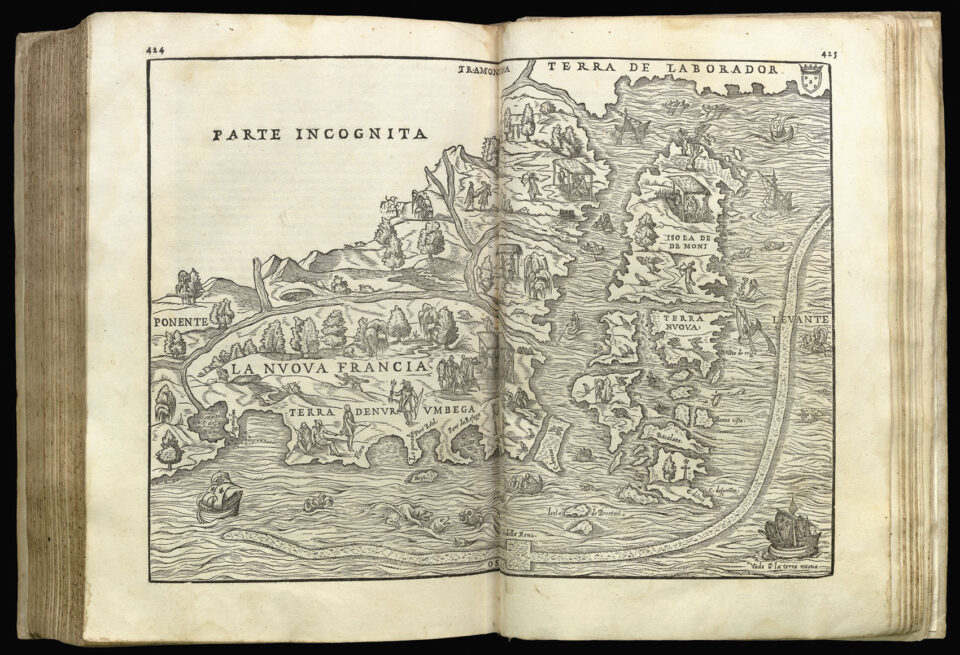 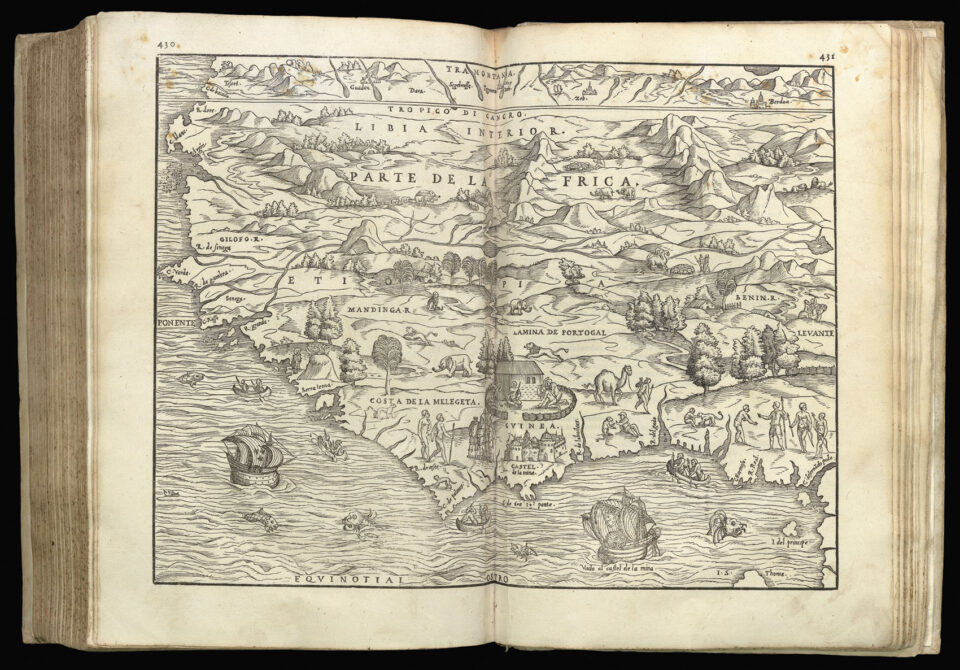 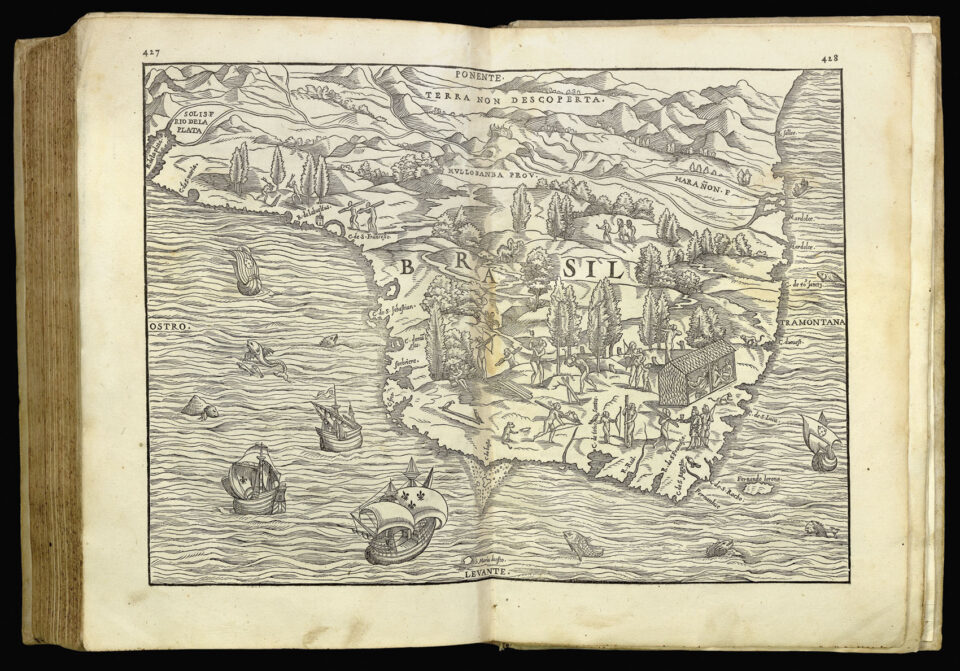