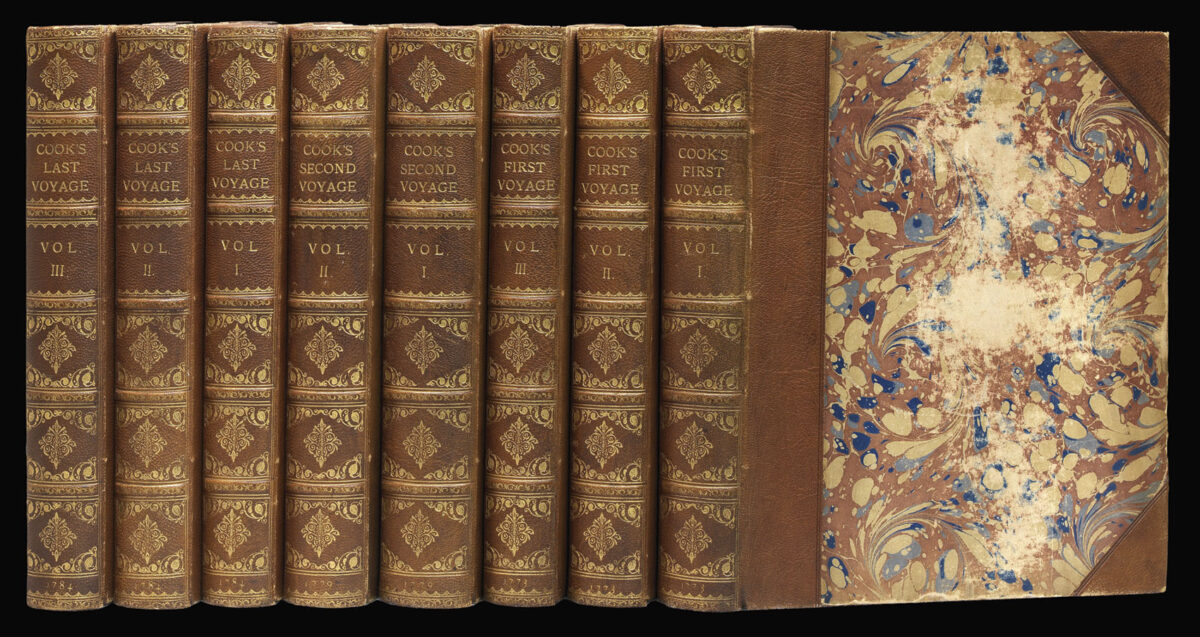 Set of Cook’s three voyages, with the death of Cook plate

“The famous accounts of Captain Cook’s three voyages form the basis for any collection of Pacific books. In three great voyages Cook did more to clarify the geographical knowledge of the southern hemisphere than all his predecessors had done together. He was the first really scientific navigator and his voyages made great contributions to many fields of knowledge” (Hill).
The voyages may be summarized as follows:

First voyage, HMS Endeavour, 1768–1771: the publicly stated goal of the expedition was to observe the Transit of Venus across the sun, but the secret purpose was the search for the mythical Great Southern Continent supposed to lie somewhere between New Holland and South America. Endeavour left Plymouth on 25 August 1768; among those aboard were Sir Joseph Banks, the naturalist Daniel Solander, and the artist Sydney Parkinson. After completing observations at Tahiti, they sailed westward. On 8 October 1769 Cook became the first European to set foot on New Zealand. They continued to the west and on 19 April 1770, the east coast of New Holland came into European view for the first time, thus determining the limits of the Pacific basin. Cook named the land New South Wales.

Second voyage, HMS Resolution and Adventure, 1772–1775: Cook refined his discoveries in the South Pacific aided by new and improved methods of determining longitude and latitude. The search for a Southern Continent continued and he determined once and for all that it did not exist.

Resolution and Adventure sailed from Plymouth on 13 July 1772. The complement included the naturalists John and George Forster, the artist William Hodges, and the scientist Anders Sparrman. Cook made the first crossing of the Antarctic Circle. March to June 1773 were spent in New Zealand waters, then they worked variously north and east to Tahiti. At Huaheine, Omai, a native of Utietea Island, was taken aboard Adventure and accompanied them back to England. In 1774 Cook continued through the Pacific from New Zealand stopping at Easter Island, the Marquesas, Tahiti, and the Tuamotus. Further discoveries were made, which included southern islands of the New Hebrides, New Caledonia, and Norfolk Island.

Third voyage, HMS Resolution and Discovery 1776–1780: Cook’s third Pacific voyage was as important for the exploration of the North Pacific as the first two had been for the South Pacific. It was also the best equipped, both navigationally and scientifically, and resulted in the discovery of Hawaii, which Cook himself regarded as his greatest Pacific discovery, and in the disproval of the existence of a navigable northern passage from the Atlantic to the Pacific.

The Resolution sailed from Plymouth on 12 July 1776, with Cook, John Gore, and Lieutenants James King and William Bligh. The Discovery sailed on 1 August under the command of Charles Clerke; also aboard were James Burney, George Vancouver, William Ellis, George Dixon, Nathaniel Portlock, Edward Riou, and the artist John Webber.

First sailing south to check Kerguelen’s Land in the Indian Ocean near the Antarctic, they called at Van Diemen’s Land and at Queen Charlotte Sound, New Zealand. In March 1777, the Island of Mangala in the Cook Group was sighted, then in May they discovered the Haapai section of the Tonga Islands. The island of Tubuai was sighted on 8 August 1777.

Sailing north from Borabora they discovered and named Christmas Island on that day, and on 18 January 1778 had their first sight of Hawaii. Continuing on to California, they sighted the coast on 7 March, in the vicinity of Drake’s New Albion. The ships worked their way up the American coast, passed through the Bering Strait to latitude 70 degrees 40 minutes before ice made them turn back, and surveyed a part of the Asiatic coast and the island of Oonalashka (Alaska).

Sailing south on 26 November 1778 they discovered more of the Hawaiian chain (Maui) then worked their way round the coast of Hawaii to Kealakekua Bay, anchoring there on 17 January 1779. On 14 February Cook was tragically killed in a shoreline skirmish with the native Hawaiians.

During the third voyage, when Britain and America were at war, Benjamin Franklin, who had met Cook in London and was then serving the Colonies’ representative at the court in Paris, wrote a general laissez passer for the expedition, requesting that the American and French fleets leave them unmolested, declaring that ​“The Increase of Geographical Knowledge facilitates the Communication between distant Nations in the Exchange of useful Products and Manufactures and the Extension of Arts whereby the common enjoyments of Human Life are multiply’d and augmented, and Science of other kinds encreas’d to the Benefit of Mankind in general”.

The long-delayed official account of the third voyage was so eagerly awaited by the public that it sold out on the third day after publication, and, though the published price was £4. 14s. 6d., as much as 10 guineas was offered by would-be purchasers. 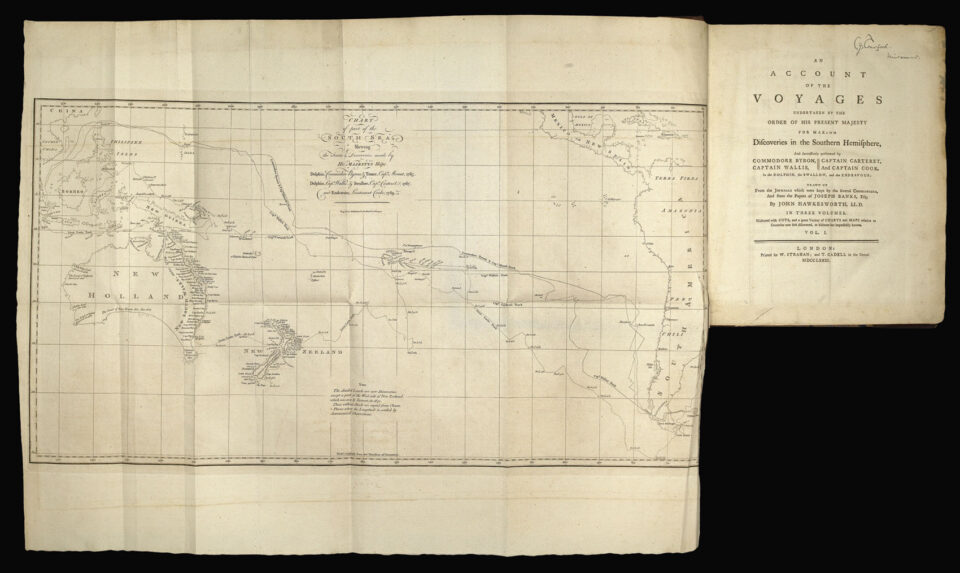