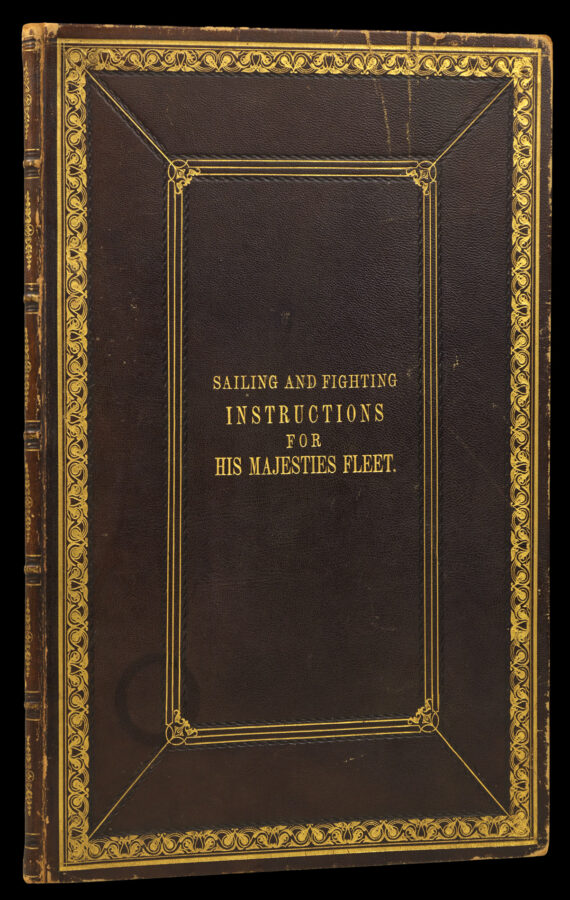 Sailing and Fighting Instructions for His Majesties Fleet.

A splendid set of sailing instructions, extra-illustrated in manuscript, and with additional holograph signals by Admiral Sir John Norris, Commander-in-Chief of the Royal Navy under George II. From the library of Gideon Welles; Lincoln’s Secretary of the Navy

A fascinating and beautiful extra-illustrated work, with Commander-in-Chief of the Royal Navy, Admiral Sir John Norris’s signed manuscript emendations to the instructions. The book was subsequently presented to Hon. Gideon Welles, Secretary of the Navy under Abraham Lincoln.

In 1710, the Royal Navy issued the 31 page ​“Sailing and Fighting Instructions for His Majesties Fleet” (cf. Adams and Waters 1376). In the same year, as Commander-in-Chief of the Mediterranean Fleet, Admiral Sir John Norris introduced eight temporary additional signals for ​“chasing”, as part of his successful defence of Sardinia. The present work shows five of these incorporated into the letterpress ​“Additional Signals” introduced on pages 32–34 of the ​“Sailing and Fighting Instructions”, with a further two, each signed by the Admiral, in manuscript on the subsequent blank leaf. As noted by Willis:

”… advances in tactical thought beneficial to the service as a whole, but introduced as a temporary instruction, could and did remain to be entrenched in stone: Sir John Norris, when commander-in-chief of the Mediterranean, issued eight signals for chasing in 1710, the first four of which were added to the permanent instructions”.

By the time the ​“Instructions” were re-issued as a 34 page work in the 1740s (see Adams and Waters 1438A), one of Norris’ ​“Additional Signals” seems to have been abandoned, and a printed date was added to the work. The earliest manuscript signal book held by the National Maritime Museum is that written by Norris in 1710/11 describing these additional signals (see NMM — Sub-collection SIG/B).

The work covers almost every conceivable scenario and condition for communicating between His Majesty’s ships: signals by day or by night, ​“sailing in a fog,” ​“instructions to be observed by younger Captains to the Elder,” and — most important — ​“Fighting Instructions”: ​“When the Admiral would have the Fleet draw into a Line of Battel [sic], one ship a‑head of another (according to the Method given to each Captain) he will hoist an Union Flag at Mizen-peek, and fire a Gun; and every Flag ship in the Fleet is to make the same Signal.” Each instruction is accompanied by a hand-coloured, pen and ink drawing showing the flag disposition and drawing one, two or ten guns, as the signal requires. Many of the printed instructions are supplemented by autograph additions and elaborations, accomplished in a neat clerical hand. This fighting instruction, for example, is followed by: ​“and every Ship is to Sail immediately into her own Station and keep the same Distance those ships do that are next to the Admiral, always taking his from the Centre.” The two extensive additional signals for ​“Chasing” on the final blank leaf are signed by Norris. Various editions of this title exist, dating back to 1673. The Admiralty replaced it in 1799 with ​‘The Signal Book for Ships of War’.

Admiral Sir John Norris (c.1670 — 1749) served as Commander-in-Chief of the Royal Navy under George II. He was given command of HMS Britannia, flagship of Admiral Sir Cloudesley Shovell, in 1703, knighted in 1705, and made an admiral in 1709. He was a Member of Parliament for Rye from 1708 until his death. In 1707, Norris, serving under Shovell, took part in the unsuccessful Battle of Toulon. Norris, whose nickname was ​“foul-weather Jack”, saw a good deal of service during the War of the Spanish Succession under William III and Anne. Under George I, he was sent several times with a fleet into the Baltic Sea. In 1744 he was given command of the channel fleet to defend Britain from an imminent French invasion. From a position of strength, Norris failed to press home his advantage as he was beset by stormy weather that earned him his soubriquet, and the French were spared likely defeat. Norris retired from the navy the following year.

The work is inscribed on the front endpaper: ​“Presented to the Hon. Gideon Welles Secretary of the Navy by Thornton A. Jenkins Chief of Bureau of Navigation Sept. 17th 1866.”

Welles served as Navy Secretary during the Civil War and continued under Andrew Johnson. Jenkins (1811–1893) had a long and eventful military career, spanning his participation in the suppression of Nat Turner’s rebellion in 1831, to the Mexican War, and culminating with his service under David Farragut during the Civil War.

We have been unable to trace any other example of this edition of the work. 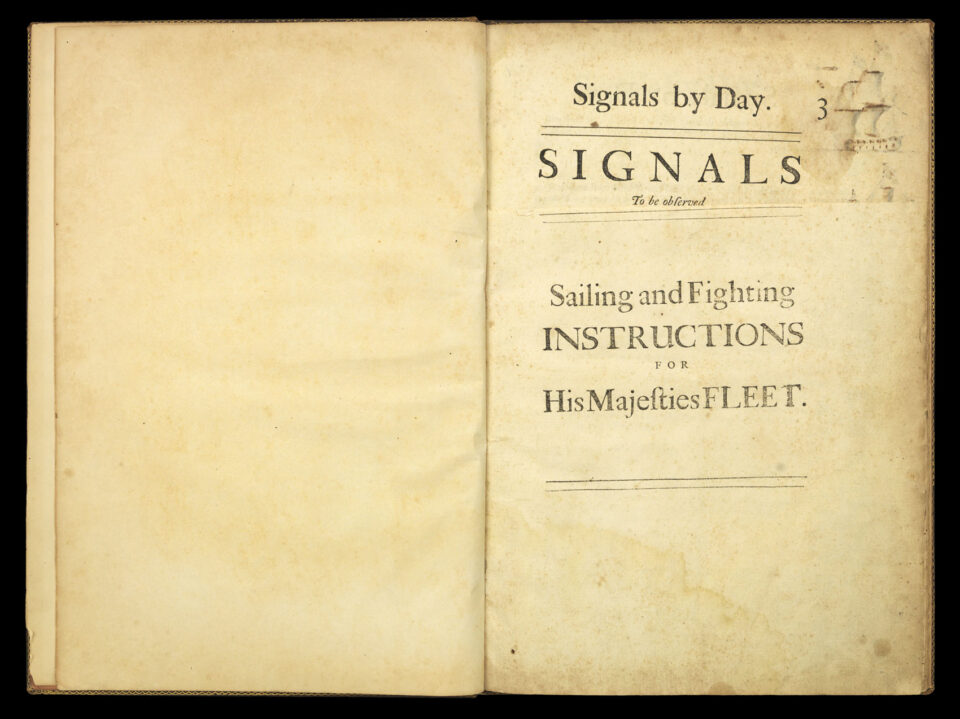 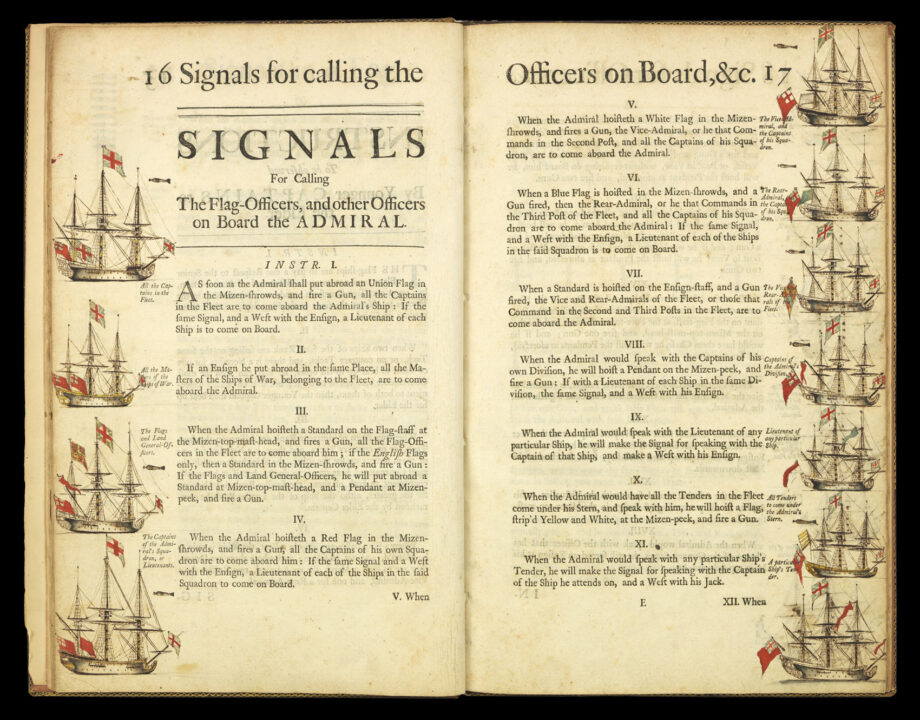 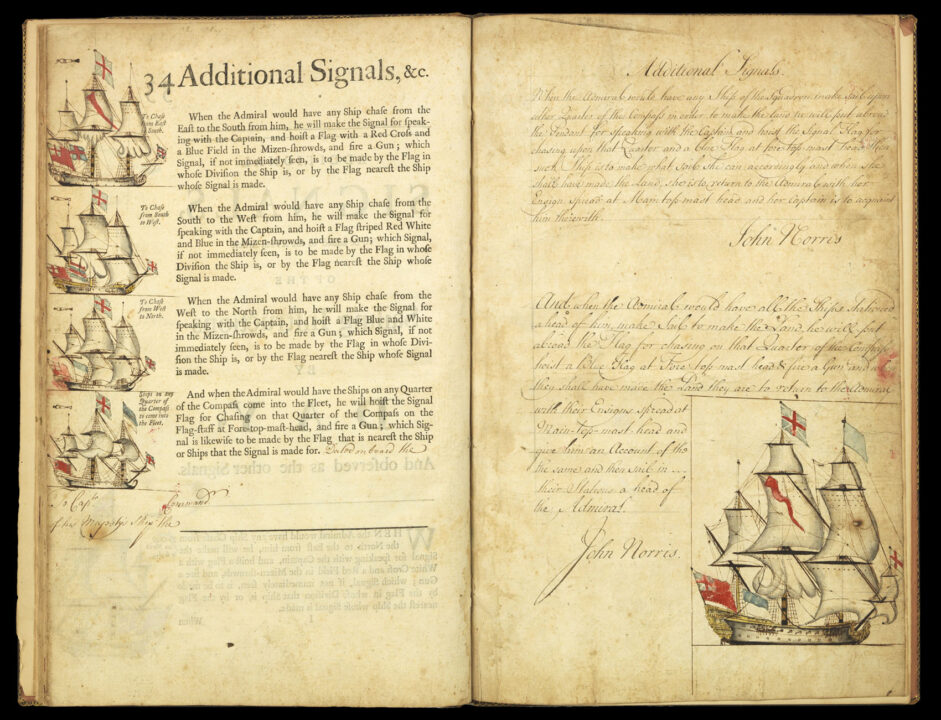 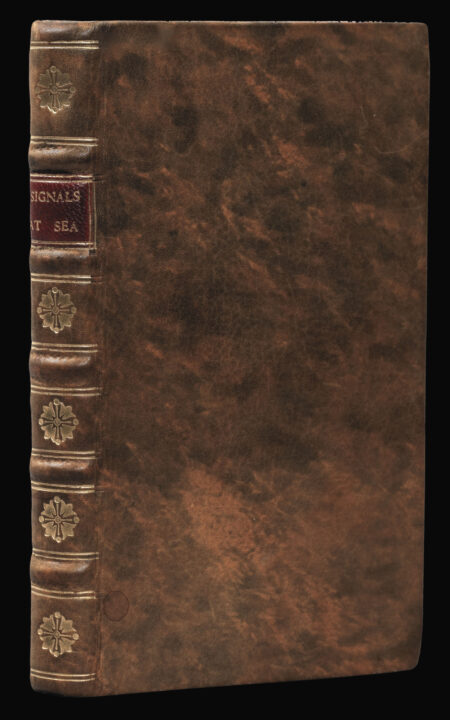