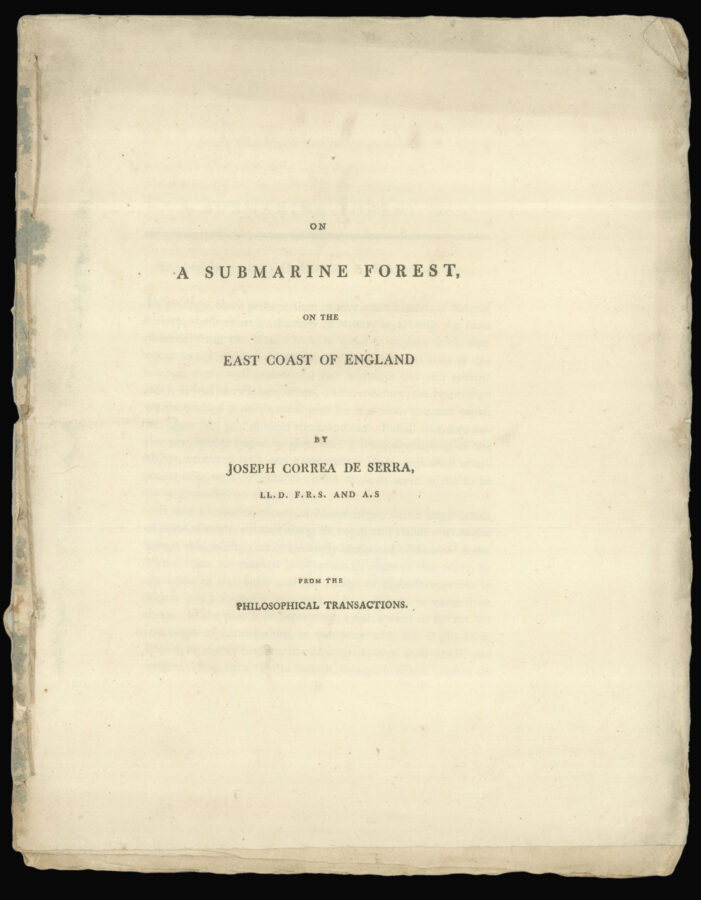 One of the earliest scientific writings on Doggerland

On a submarine forest, on the East coast of England By Joseph Correa de Serra, L.L.D. F.R.S. and A.S. from the Philosophical Transactions.

José Francisco Corréa da Serra (1750–1823) was a Portuguese abbot, diplomat and scientist. After spending several years living outside Portugal due to political reasons, Correia moved to England and became a fellow of the Royal Society in 1797 under the protection of Sir Joseph Banks.

During his time at the Royal Academy, he wrote a number of papers, which were published in Philosophical Transactions, the world’s first and longest-running scientific journal.

The present work is the second of Correia’s papers presented at the Royal Society, the first one being ​‘On the fructification of the submersed Algae’, published the same year. ​‘On a submarine forest’ narrates the observations made by Correa during an expedition carried out alongside Banks on the coast of Lincolnshire in September 1796. During the tour, he observed the characteristics of ancient vegetable remains on coastal islets, putting forward the idea that they once belonged to a forest, destroyed and buried by natural causes, and submerged by a sea inroad. The area would later be named Doggerland, an area covering most of the southern North Sea, which was during the Mesolthic (c 7000BC) a vast land bridge joining Britain to continental Europe.

Other papers by him, mostly related to botanic and geology, were published on prestigious journals in France and America, such as the Annales du Museum d’Historia Naturelle, the Bulletin the la Société Philomatique, Archives litteraires de l’Europe, Transactions of the American Philosophical Society and the American Review.

We were able to trace one example of the present edition in its separately published form in public institutions (the British Library).