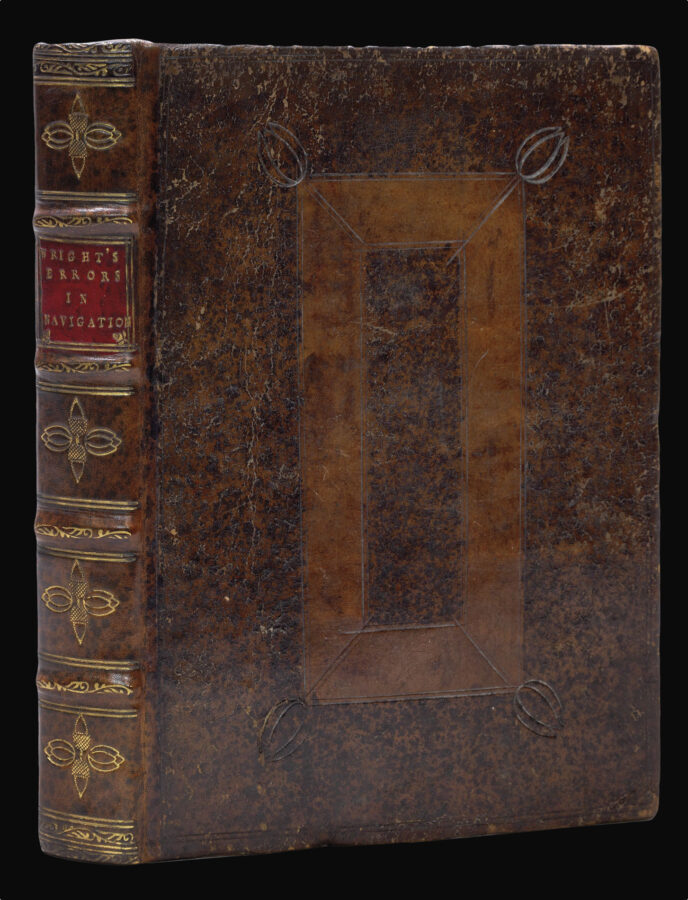 Moxon’s theory of a Northwest Passage

Certain Errors in Navigation. Detected and Corrected… with many Additions that were not in the former Editions.

Edward Wright’s seminal work. ​‘Certain Errors in Navigation’ was first published by Wright in 1599, revised and then republished in 1610, then extensively improved by Joseph Moxon and reissued in 1657, with additions including Moxon’s own ​‘The Haven-finding Art, or the way to find any Haven or place appoynted at Sea’. This last edition, the present text, is exceptionally important, because it contains Moxon’s map, ​‘A Plat of all the World’.

Edward Wright (1561–1615), an English scholar and sometime buccaneer, was the first person to explain the mathematical basis of the Mercator projection. In 1589, while still a fellow of his Cambridge college, Wright left the world of academia, and with dispensations from the crown and college, he joined a raiding party to the Azores under the pseudonym Captain Edward Carelesse to make navigational studies. Wright also claimed to have sailed with Sir Francis Drake to evacuate Sir Walter Raleigh’s Virginia colony, Roanoke.
Wright’s seafaring experience aided him when he helped Emery Molyneux with his terrestrial globe in 1592, and seven years later he produced his own work, ​‘Certain Errors of Navigation’. In it he explains how to divide the meridian, which was of particular importance for the use of the Mercator projection. Gerard Mercator, the cartographer responsible for the first atlas, had designed a new system of projection (the means whereby the surface of the earth, a three-dimensional object, is represented on a two-dimensional surface) but had not explained how to calculate it. It also contains information on latitudes and compass variation.

Joseph Moxon (1627–1691) was an English printer and instrument maker. His father was also a printer, and took Moxon to see Bibles being printed in the Low Countries when he was young. Moxon and his brother James became leading printers of mathematical and scientific texts, as well as globe and instrument makers. In spite of his Puritan upbringing, Moxon was appointed Hydrographer to Charles II following the Restoration. He produced the first English language dictionary devoted to mathematics, and in 1678 became the first tradesman to be elected as a Fellow of the Royal Society. Moxon theorized that the Arctic was ice free, and warmed by 24 hours of sunlight in the summer. He also speculated that Arctic ice was created near land, and that if one sailed far enough northwards, one would be free of northern land masses and, subsequently, ice, which led him to believe that the Northwest Passage would be found by sailing near the North Pole. These views later influenced Daines Barrington and Samuel Engel, whose refinement of Moxon’s ideas would in turn influence Captain Cook’s Third Voyage in search of the Northwest Passage.

Using the Mercator projection, Moxon made several significant revisions to Wright’s original plate, the most important of which is the entirely new depiction of Australia (noted as ​“Discoverere 1655”) and a relatively accurate rendering of Hudson’s Bay. Moxon has erased Wright’s large royal coat of arms in the upper left corner of the map, and has redrawn all of Wright’s original coastline markings. California, however, remains an island.

1. Bookplate of the Earls of Macclesfield from the South Library on the front paste-down dated 1860, discreet blind-stamp on title-page. 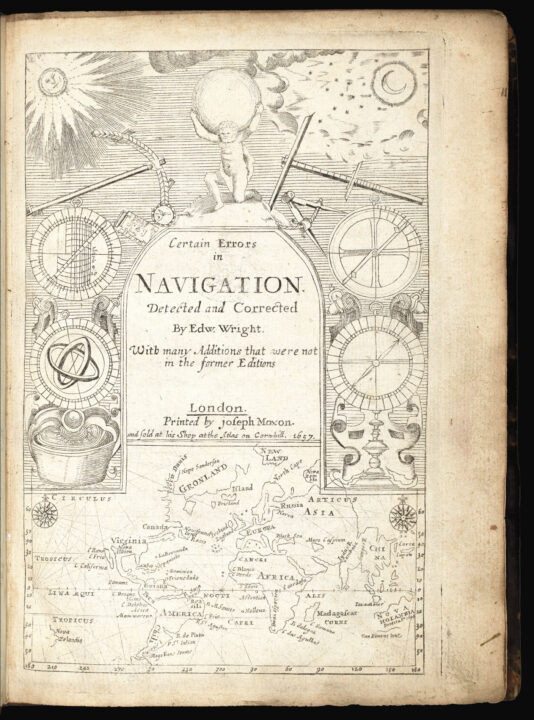 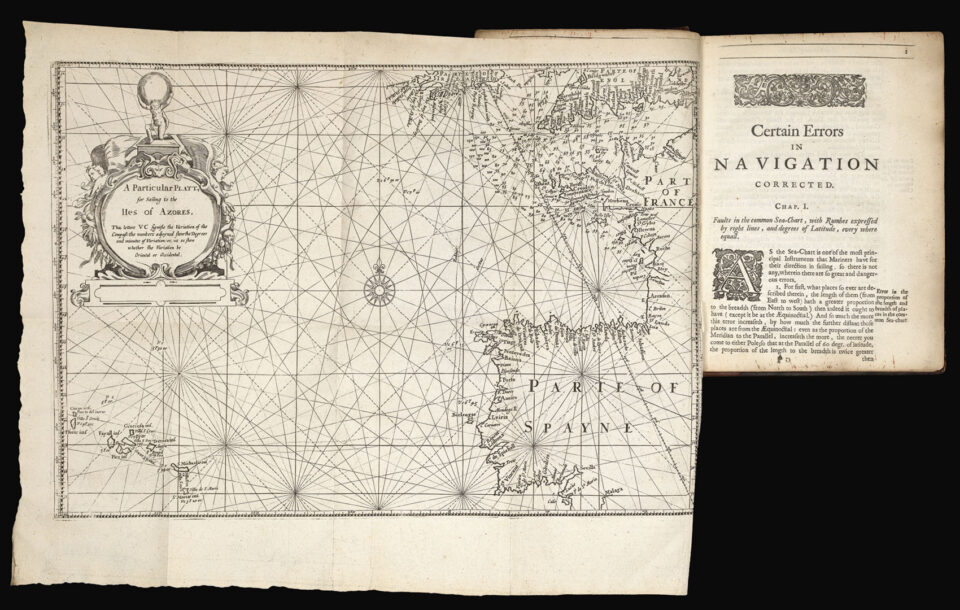 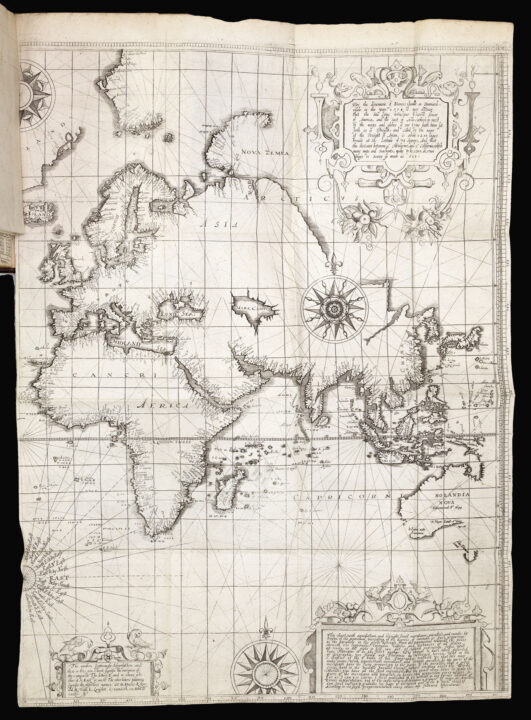 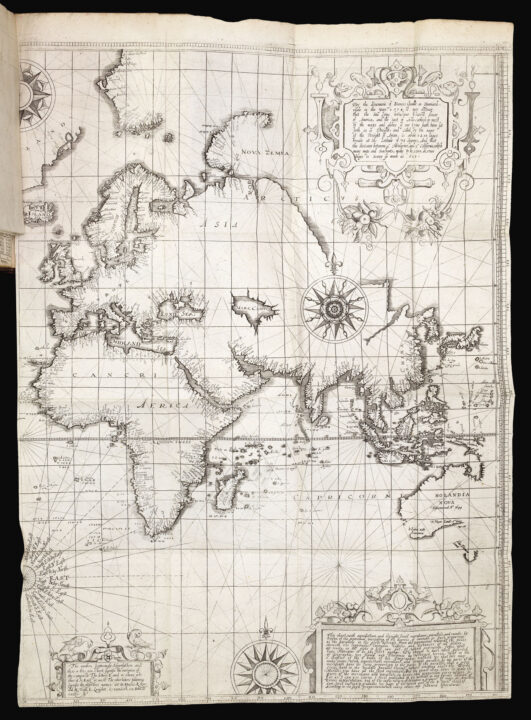 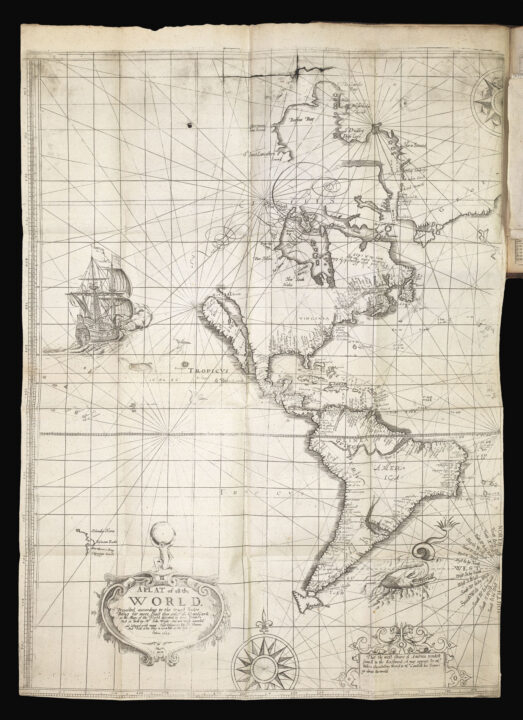