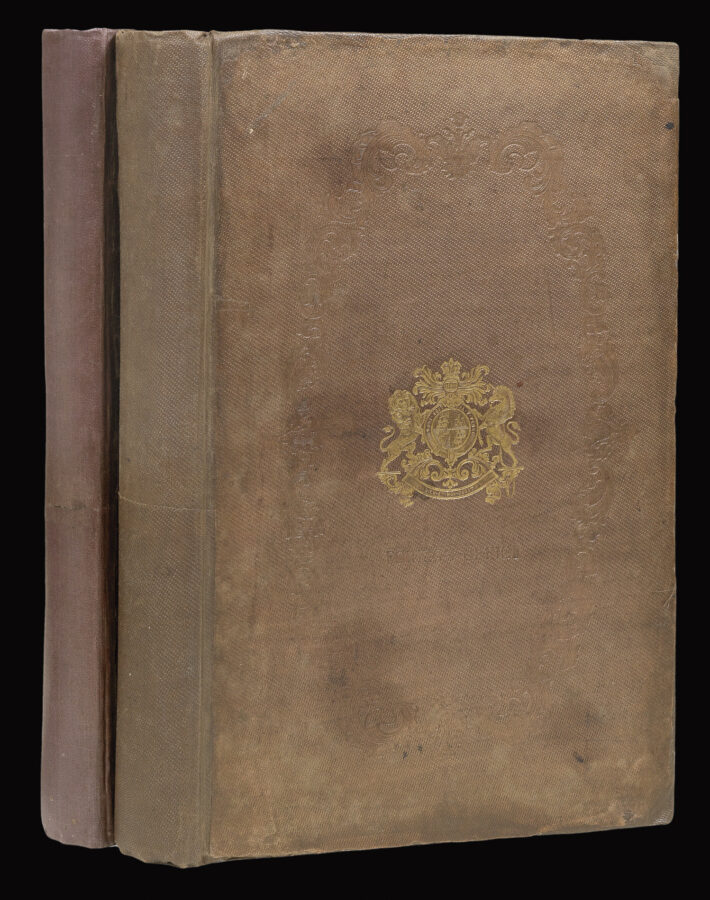 First official publication of the founding legislation of the Hong Kong, apparently unrecorded, no copy on OCLC or KVK, not in the Judiciary Library of Hong Kong, no copy traced at auction. There is no place of publication, publisher or printer given, but internal evidence clearly suggest that this was officially produced in Hong Kong in 1855, the paper-stock is watermarked in 1852. The volume is divided into three sections, each with a separate title page, but paginated continuously. The first section, Laws of the Colony of Hong Kong, collect the proclamations, notifications, commissions and charters establishing the basis of colonial rule from cession in 1841, much of the material having been compiled from the HongKong Gazette, Canton Press, China Repository and other journals of record and ​“compared with the Official copies” for inclusion. This is followed by seventy-five ordinances issued between 1844–54, presented in their original format with a wood-engraved vignette of the Royal Arms as masthead, covering all aspects of the development of the administration of the rapidly growing colony, the population of Hong Kong rose from around 33,000 at the time of the first census in 1851 to close to 120,000 in 1861. These ordinances detail the definition and refinement of the machinery of government over that decade; the legal system, policing, including the suppression of Triad and other secret societies; the chartering of the bank; the standardisation of weights and measures; taxation and the regulation of trade and commerce; suppression of slavery, and control of the opium trade. The final section contains a dozen ordinances specifically relating to the court system. Provided with both a table of contents and a full index, and the volume was evidently produced to gather together this key primary source documentation for easy reference. The first recognised publication to this purpose is The Ordinances of the Legislative Council of the Colony of Hong Kong, commencing with the Year 1844 … [to 1887], published in four volumes in 1890–1. The second volume offered here comprises a nonce collection of 126 actual ordinance for the decade 1854–64 as issued — some of the earlier leaves with 1854 watermarks — in effect a continuation of the first, and provided with a chronological contents list in manuscript.

With the ownership inscription of Julian, later Sir Julian, Pauncefote probably Hong Kong’s most prominent early legal administrator. Pauncefote’s private fortune was wiped out by a bank crash in 1860, and he ​“determined to repair his fortune by legal practice abroad and in 1862 sailed for Hong Kong accompanied by his wife and newborn daughter” (ODNB). At the time the colony ​“was a turbulent place, and crime and piracy were rife. In May 1866 Pauncefote was appointed acting attorney-general of the colony, and on 22 July attorney-general, a post which left him free to continue his private practice and accumulate a moderate fortune (which, however, he lost in a second crash in 1874). Over the next seven years he worked with Governor Sir Richard Graves MacDonnell to reform the police and improve the administration of justice, being himself responsible for preparation of the colony’s code of civil procedure. As attorney-general Pauncefote also deputized for the chief justice of the supreme court while the latter was on leave”. The title page of the first volume has the pencil inscription ​“The Chief Justice”. Pauncefote left Hong Kong in December 1973, and was knighted for his services. Subsequently he serves as legal assistant permanent under-secretary to, successively, the Colonial Office and at the Foreign Office, a post specifically created for him by Lord Derby, and was a delegate to the European commission on the navigation of the Danube, and the international commission of the Suez Canal. In 1889 he was made minister — de facto ambassador — to the United States. On his death in 1902 ​“President Roosevelt broke with precedent by flying the American flag at half-mast on the White House and personally attended the official funeral ceremony organized b the American government.“

A historically significant publication, with a superb provenance from which it can be inferred that its issue was as an internal aide memoire for those centrally involved in the creation of Hong Kong’s legal and administrative infrastructure. 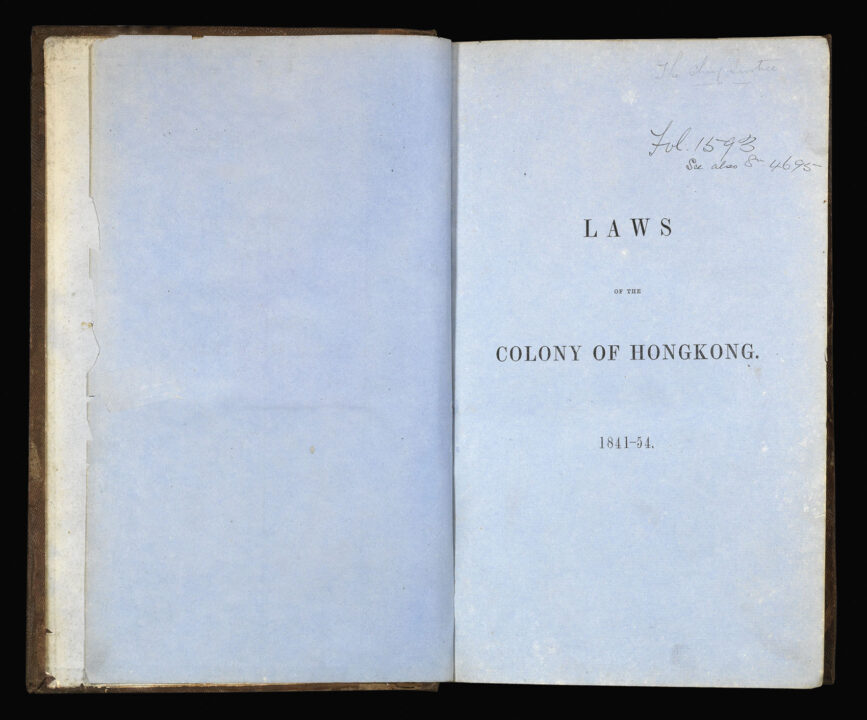 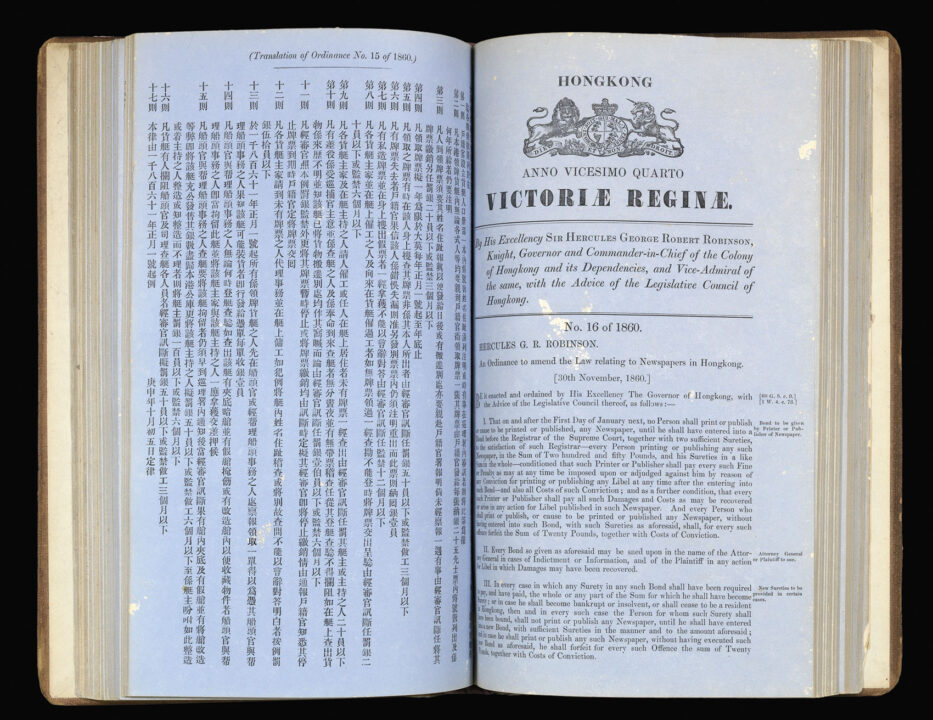 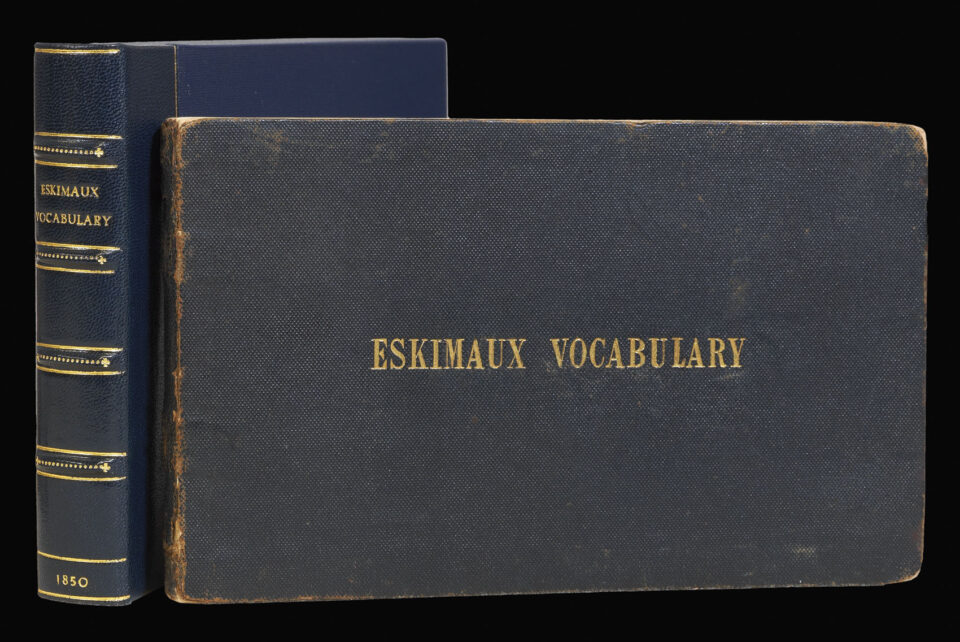 1850.
Eskimaux and English Vocabulary for the use of the Arctic Expeditions.