The Holy Land, Syria, Idumea, Arabia, Egypt & Nubia. From Drawings Made on the Spot by David Roberts, R.A. With Historical Descriptions, by the Revd. George Croly, L.L.D. Lithographed by Louis Haghe.

First edition, original Subscriber’s copy of ​“one of the most important and elaborate ventures of nineteenth-century publishing, and… the apotheosis of the tinted lithograph” (Abbey), with the lithographed plates additionally coloured by hand to represent as closely as possible the magnificence of Robert’s original paintings. What legendary bibliophile John Roland Abbey originally reported in 1956, remains true today: ​“The extraordinary merit and interest of the drawings which he exhibited on his return created a great sensation. The fidelity of his accurate pencil, his skilful adherence to truth of costume and surroundings, his attention to characteristic effect in architecture and landscape, won immediate recognition and praise”.

The son of an Edinburgh cobbler, Roberts’ early artistic talent was soon noticed and was channeled by his parents into an apprenticeship with a house-painter, this led gradually into a successful career as a scene-painter with a travelling theatre. By 1823 he had reached London, and was an early member of the Society of British Artists, by 1835 he was a member of the Royal Academy. Shortly thereafter, he fulfilled ​“an ambition ​‘from earliest boyhood, to visit the remote East” (Roberts, record book, 1.108). ​“Leaving London in August 1838 for Paris and thence travelling via Alexandria to Cairo, before visiting the pyramids at Giza. Hiring a cangia, he sailed up the Nile as far as Abu Simbel, stopping on his return north to sketch temples and ancient sites such as Philae, Karnak, Luxor, and Dendera. Back in Cairo he drew its streets and mosques before departing for Syria and Palestine in February 1839. He travelled through Sinai to Petra and thence north, via Hebron and Jaffa, to Jerusalem. From there he made an excursion to the Jordan, the Dead Sea, and Bethlehem and, after spending a further week in Jerusalem, he continued north, visiting many places associated with the Bible, before exploring Baalbek. He sailed for England from Beirut in May 1839, was quarantined in Malta, and returned to London in July. He was the first independent, professional British artist to travel so extensively in the Near East, and brought back 272 sketches, a panorama of Cairo, and three full sketchbooks, enough material to ​‘serve me for the rest of my life’ (Roberts, eastern journal, 28 Jan 1839)” (Matyjaszkiewicz).

On his return, Roberts spent the next ten years making ​“a serries of intire new drawings” [sic] for what would become his magnum opus, the 247 large coloured lithographs created by Louis Haghe from his paintings. ​“No publication before this had presented so comprehensive a series of views of the monuments, landscape, and people of the Near East. Roberts was to paint more oils of the East than of any other region he visited, exhibiting thirty-one at the Royal Academy alone. These received critical acclaim and sold for high prices: for example, ​‘Jerusalem from the Mount of Olives’ (Holloway Collection at Royal Holloway and Bedford New College, Egham) was commissioned for £330 in 1841 and his ​‘Ruins of Baalbec’ sold for £440 the same year, while ​‘The Island of Philae’ (1843; priv. coll.) bought by a friend for £100, rapidly sold for £200, and in 1858 fetched 400 guineas” (Abbey). Sir Francis Graham Moon (1796–1871), ​‘publisher in ordinary to Her Majesty’, Queen Victoria, undertook their publication, dedicating them to the Queen. It was ​“undoubtedly the most costly and lavish, and potentially risky, publishing enterprise that Moon had ever undertaken. Investing £50,000 in the project, he exhibited the drawings across England and by 1841 had raised an enormous subscription list for the lithographs, which were executed by Louis Haghe, one of London’s leading lithographers. Like many of the artists Moon dealt with, Roberts was pleased with the results, but critics found fault with a variety of aspects of the work, Lady Eastlake alleging that Moon was no more than a vulgar, uneducated ​‘buffoon’ (Fox, 401) who put his own interests above those of art” (Peltz). Roberts himself thought ​“Haghe has not only surpassed himself, but all that has hitherto been done of a similar nature. He has rendered the views in a style clear, simple and unlaboured, with a masterly vigour and boldness which none but a painter like him could have transferred to stone”.

The book was published in parts from 1842 to 1849, and the original cost for subscribers for a coloured copy was about £150. ​“For the coloured edition the plates were all executed in two tints by Louis Haghe, and were exquisitely coloured by hand in imitation of the original drawings. It should be said that Roberts himself did no drawing on the stone for this book. The lithographs were done entirely from Roberts’ drawings by Harding and Haghe, the latter of whom devoted about eight years to the series. The book is in six volumes. Three dealing with the Holy Land contain one hundred and twenty-two coloured plates, and three of Egypt and Nubia contain one hundred and twenty-three plates. In addition to the coloured plates there are maps and a portrait” (Hardie). 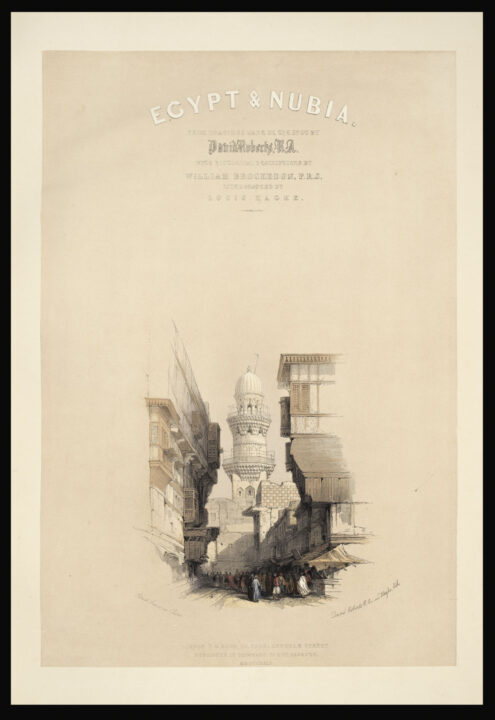 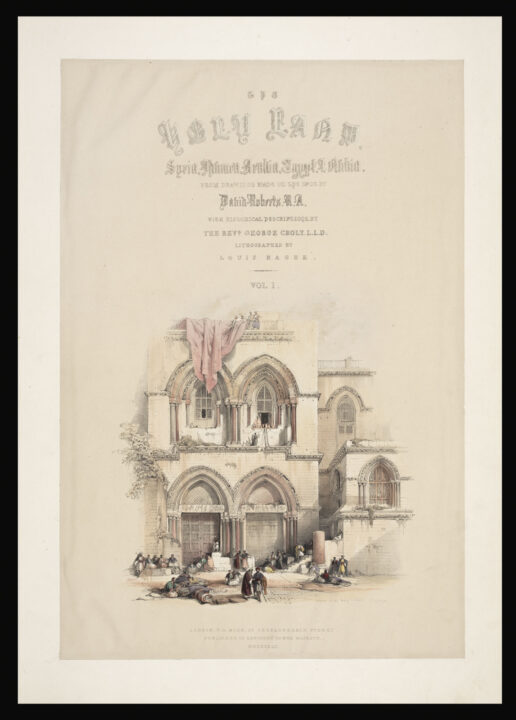 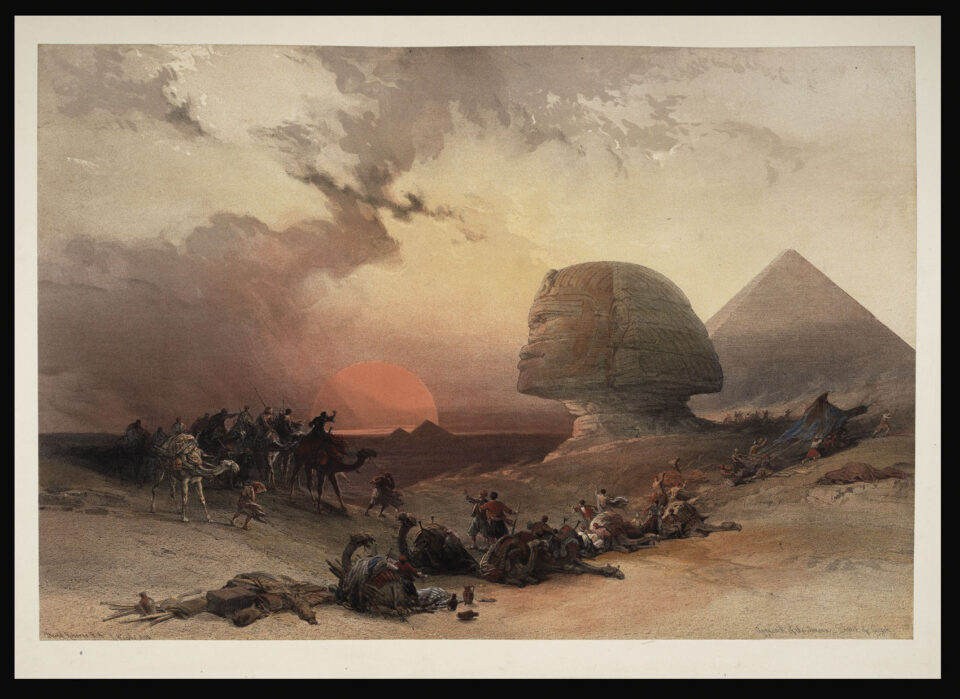 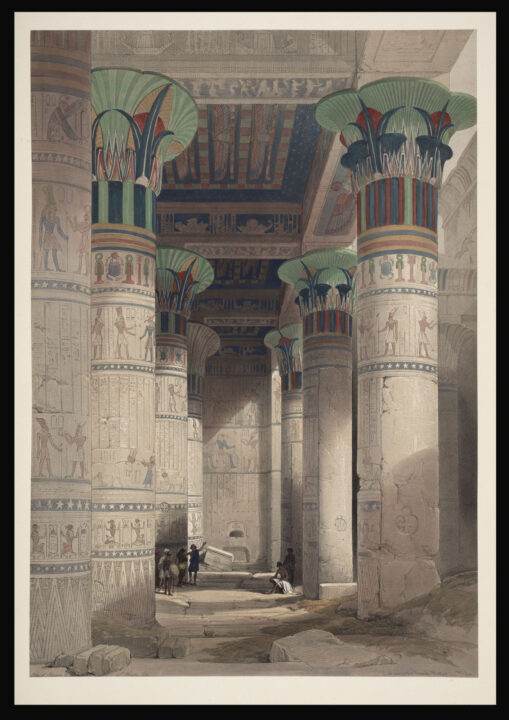 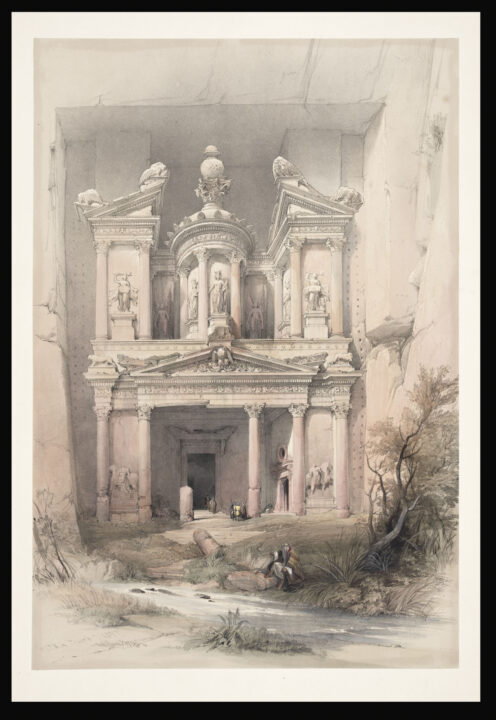 The height of Empire