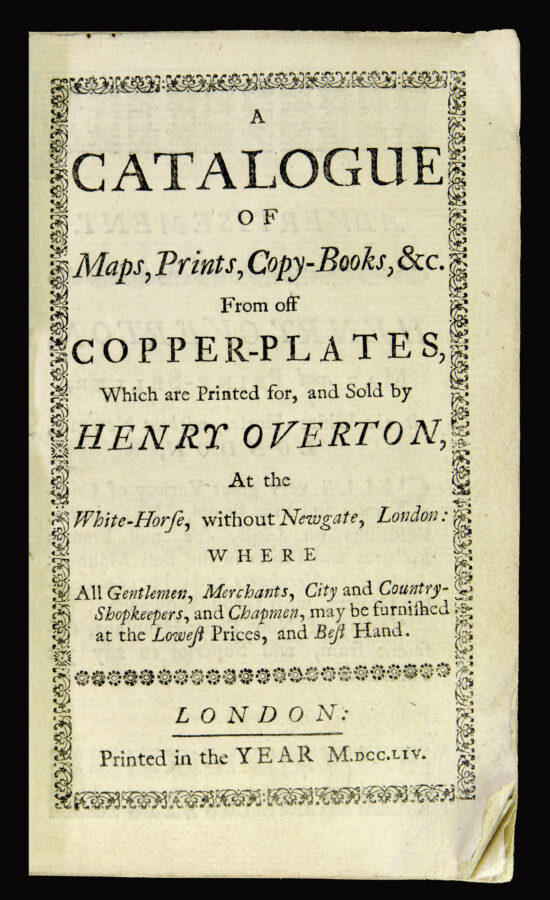 A Catalogue of Maps, Prints, Copy-Books, &c. from off Copper-plates, Which are Printed for, and Sold by Henry Overton, at the White-Horse, without Newgate, London: where All Gentlemen, Merchants, City and Country-Shopkeepers, and Chapmen, may be furnished at the Lowest Prices, and Best Hand.

​“Sells very great Variety of Common and Fine Prints, Mezzotinto’s, Paintings on Glas (sic), &c. and Frames Pictures and Prints in the Best Manner: And Serves Merchants and other considerable Dealers, with Good Allowance. Variety of New Paper-Hangings, different from, and Superior to any yet Published”.

The catalogue begins with the largest and most impressive items of Overton’s stock: his large wall maps printed on four sheets, listed here as a map of the world; a map of the British Isles; a map of England and Wales; and a map of the war in Flanders. All of which may be had, ​“pasted on cloth with a roll and a ledge, and handsomely coloured” for a mere six shillings. The catalogue goes on to list maps on three sheets; two sheets, ​“each about three foot by two foot”; prints on two sheets including a set of Hogarth’s ​‘A Rake’s Progress’; maps printed on one sheet, including 58 maps by John Speed; prints on one large sheet, including historical scenes and views of London by Canaletto; prints of Roman antiquities after Paulo Panini; views of Scotland by Sandby; views of Ireland by Tuder; views of European cities, most notably by Piranesi and Zocchi; seascapes; views of China and the Far East; prints by Wenceslaus Hollar; drawing books; copy-books; mezzotints; and a large selection of cheap prints on half a sheet of Fool’s-Cap paper, ​“chiefly intended for children to play with”.

The catalogue ends with an advertisement for wallpaper or ​“paper hangings for the adornment of rooms, stair-cases, and closets” produced by a new method of ​“colours in oyl”. Although the originator of this new process is not named, he is said to have 20 years experience on the continent perfecting his art. The advert goes on to defend the artist against the accusation that the wallpaper ​“retains a bad smell being printed in oyl colours, and is not so bright as works performed by paper stainers”. The advert ends with a list of chintz and stucco patterns, and states that if these prove popular the proprietors ​“propose to publish three new patterns anually”. The artist who introduced this new printing process was John Baptist Jackson (c.1700–1770). Originally from London, Jackson was apprenticed to Jean Michel Papillon in Paris before settling in Venice by 1731. Disillusioned with the intricate engraving techniques then dominant, he determined to revive the bold chiaroscuro woodcut style of the early Northern European masters. He returned to London in 1745 and set upon his wallpaper venture, which turned out to be a catastrophic failure. This advert was one of the last throws of the dice.

We are only able to trace two institutional examples of the present work: an incomplete example housed at the Paul Mellon Centre (47 of 79pp.), and an example in University College Library, Oxford. 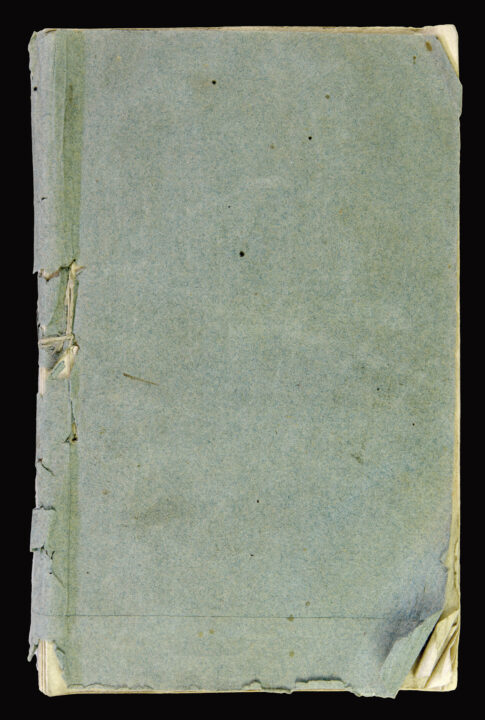