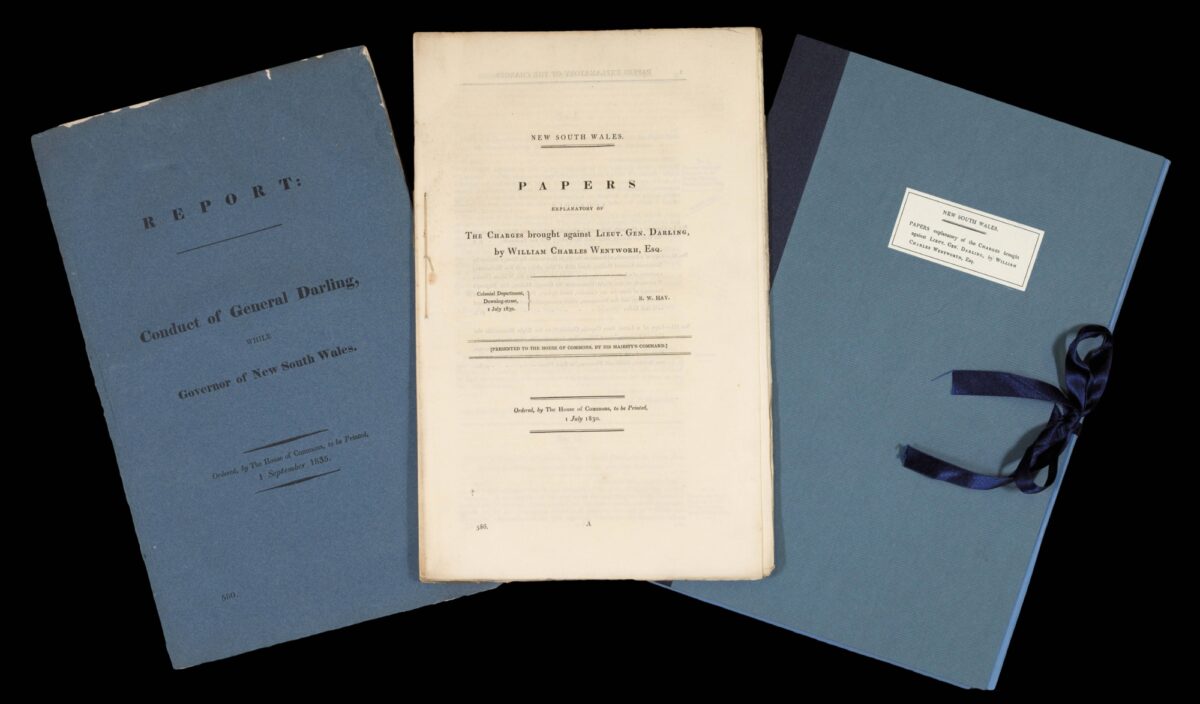 First inklings of self-government and nationhood for Australia

Parliamentary Papers related to the dispute between Wentworth and Darling.

- ​‘New South Wales. Papers explanatory of the Charges brought against Lieut. Gen. Darling, by William Charles Wentworth, Esq.’ London, Ordered, by the House of Commons, to be printed, 1 July 1830. Number 586

- ​‘Report from Select Committee on the Conduct of General Darling, while Governor of New South Wales. With the Minutes of Evidence and Appendix’. London, Ordered, by the House of Commons, to be printed, 1 September 1835. Number 580

Official parliamentary papers, recording a biased account of the famous case brought by William Wentworth, an early proponent for Australian self-government, against the then Governor, Sir Ralph Darling, but essential, only offering Darling’s defence, and not Wentworth’s.

The young William Wentworth (1790–1872), led a peripatetic youth. However, his ​“adventurous spirit, drought, and the desire to discover new pastures led him in May 1813, in company with William Lawson, Gregory Blaxland, four servants, four horses, and five dogs, to take part in the first great feat of inland exploration, the crossing of the Blue Mountains”. The ease with which they accomplished their mission, which established a stock route, gave impetus to great pastoral expansion.

Passionate about Australia, in 1819, Wentworth published ​‘A Statistical, Historical, and Political Description of the Colony of New South Wales and Its Dependent Settlements in Van Diemen’s Land, With a Particular Enumeration of the Advantages Which These Colonies Offer for Emigration and Their Superiority in Many Respects Over Those Possessed by the United States of America’. His book did stimulate emigration, and was reissued in revised and enlarged editions in 1820 and 1824. Intent on achieving freedom of the press, trial by jury, and taxation by consent, in the colony of New South Wales, the third edition of the vehemently attacked the report of Commissioner Bigge, who had been censorious of Governor Macquarie’s emancipist policies and fair dealings.

In 1826, Wentworth seized on the death of a Private Suggs, in custody, as a pretext for attacking the autocratic government of Governor Ralph Darling (1772–1858). He alleged the illegality of Darling’s act, and demanded his recall to England. The affair rapidly developed into a bitter feud, and the resulting cases occupied the Supreme Court through 1828 and 1829. All of which is recorded in these papers. Eventually, Darling served out his tenure and departed for England in 1831.

By taking up the ​“fight against autocracy and by his imperious courage and oratory in the defence of emancipists at the Bar Wentworth had awakened a political instinct among the smaller people of Sydney and become their hero. He had touched both journalism and the Bar with the fire of his brilliance and given them definition, direction, and the vision of greatness: he may justly be called their prophet in the Australian nation, if not the prophet of that nation itself. The larger fight remained: for the great goal of self-government. But, even as the people of Sydney were flocking out to Vaucluse to join with the popular hero in celebration of the tyrant’s departure, changes in Wentworth’s own life and activities were beginning to cause disillusion among many who only partially understood his aims. With the swelling tide of immigration into New South Wales, the exclusive-emancipist issue was receding into the background of politics. So fast were events moving that in 1835, when Darling was cleared of Wentworth’s charges and knighted, there were few in Sydney who showed concern” (Persse).