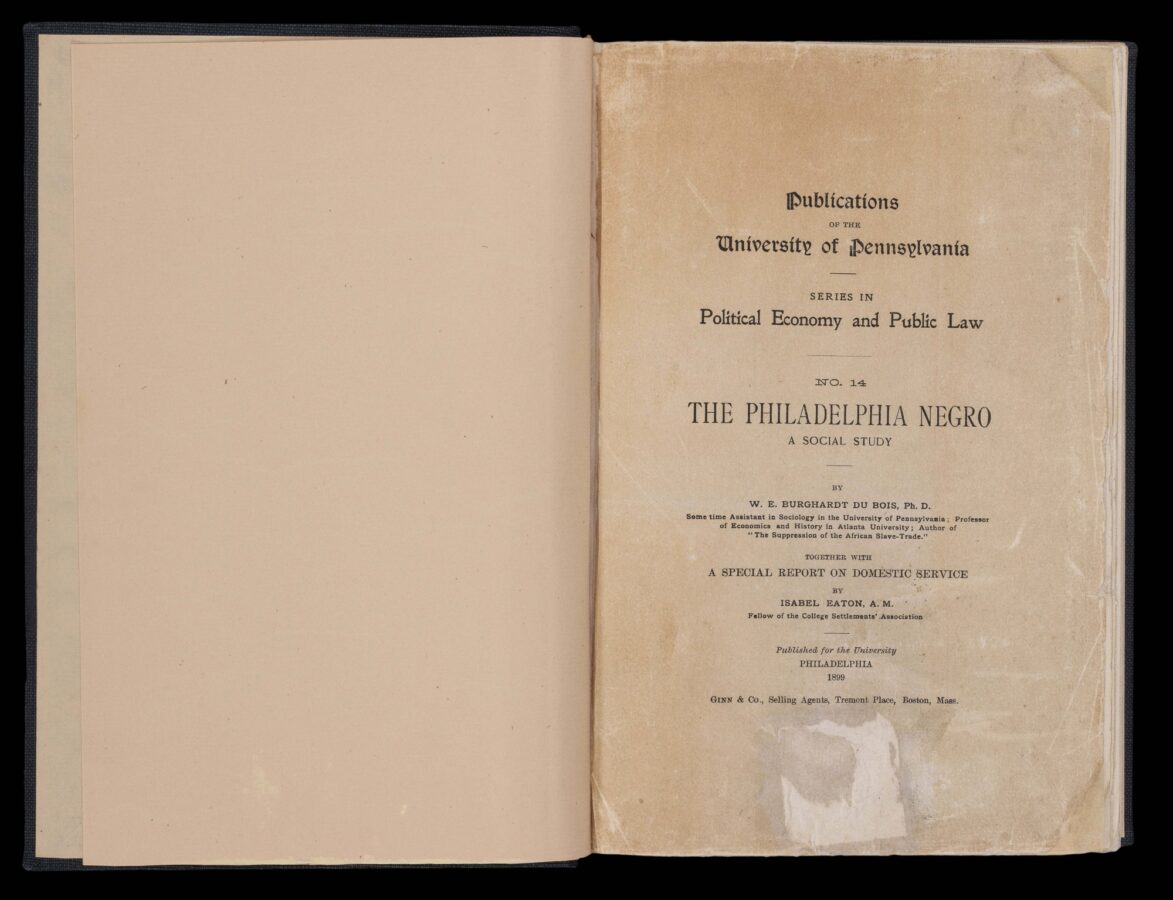 The Philadelphia Negro. A Social Study… Together with a Special Report on Domestic Service…

W.E. Burghardt Du Bois (1868–1963), descended from Bahamian mulatto slaves, was a life-long African American activist and social reformer. His monumental study, published in the University of Pennsylvania series in Political Economy and Public Law. No. 14, was a ground-breaking ​“conceptualization of, methodological approach to, [the] political values and commitments regarding the problem of race in America. His conceptions were historical and global, his methodology empirical and intuitive, his values and commitments involving both mobilization of an elite vanguard to address the issues of racism and the conscious cultivation of the values to be drawn from African-American folk culture” (Thomas C. Holt for OANB).

Du Bois’ study was instigated and funded by philanthropist and resident of the Seventh Ward of Philadelphia, Miss Susan Parrish Wharton (1852–1928). In 1896, she persuaded the provost of the University of Pennsylvania, Charles Harrison, to commission Du Bois to research the experience of the increasing population of African Americans living in the Seventh Ward of the city. The growing population was largely drawn there from southeastern states, such as Virginia, the Carolinas and Georgia, by the ​“disastrous consequences of the crop lien and sharecropping systems,… the lack of educational opportunities in the South, the failure to allow blacks to participate in politics or even vote in southern elections, as well as official segregation and unofficial threats, intimidation, and violence associated with campaigns for ​“white supremacy”” (Katz and Sugrue, page 198).

Philadelphia, at the time, was one of the largest industrial centres on the east coast of North America. It had ​“large and deeply rooted resident black community. Migrants to the city in the 1890s or early 1900s were often able to find employment, not in the factories, but in various service areas” (Katz and Sugrue). However, there was a lack of adequate and affordable housing, high rents, overcrowding, unsanitary health conditions, no running water, and other ​“tenement abominations” (Du Bois page 294). Du Bois conducted his investigations largely by personal interview, house-to-house: ​“an inquiry which was at best a prying into private affairs. With no authority of law behind me, the whole success of the undertaking depended on voluntary co-operation, that cannot be explained away by fantastic theories, I am glad that, almost without exception, there was a disposition to allow the full truth to be known for the sale of science and social reform” (Du Bois, pages iii-iv).

The Maps
​’The Seventh Ward of Philadelphia: The Distribution of Negro Inhabitants Throughout the Ward, and their social condition’. Colour-coded, house by house, the seventh ward is shown as overwhelmingly ​“white”, at about 70%; of the African American dwellings, about 50% of the occupants are ​“graded” ​“working people – fair to comfortable”, about 20% ​“the middle classes and those above”, the remainder ​“the poor” and the ​“vicious and criminal classes“

Isabel Eaton, author of the ​‘Special Report on Negro Domestic Service in the Seventh Ward, Philadelphia’, included after Du Bois’ report, was a Fellow of the College Settlements Association, a contributor to the ​‘Hull-House Maps and Papers’ project in Chicago, was probably recommended to this project by Jane Addams (1860–1935), founder of Hull House. Her report is essentially a ​“history of women going out to work for wages” (Katz and Sugrue). At the end of the nineteenth century, Philadelphia was a city noted for its unusually high proportion of women, predominantly European American, in the industrial workforce. ​“Polish and Italian immigrant women, for example, worked in Philadelphia textile and garment factories – but generally only until they married or had their first child… African American mothers’ long-standing experience as workers outside the home made them unique” (Katz and Sugrue, page 182).

From a long line of social reformers, after graduating from Vassar, Wharton opened the ​“Saint Mary Street Library, a public library for African American children. In 1888, she founded a Philadelphia branch of the Octavia Hill Association with her cousin, Helen Parrish. She also opened a cooking school, offered penny lunches to children, and sponsored a kindergarten. Wharton was the first chairperson and president of the Starr Centre Association of Philadelphia, an organization meant to provide education and social improvements to people in Philadelphia’s poor neighborhoods. Offered her home to house Starr Centre meetings. Wharton also founded the Wharton Center, the Whittier Centre for the Study and Practical Solution of Negro City Problems, and invited the College Settlement Association to establish a branch in Philadelphia. She was a member of the executive committee of the Philadelphia College Settlement and convinced the provost of the University of Pennsylvania to invite W. E. B. Du Bois to Philadelphia” (the Jane Addams Papers Project online).

Library stamp removed from the title-page 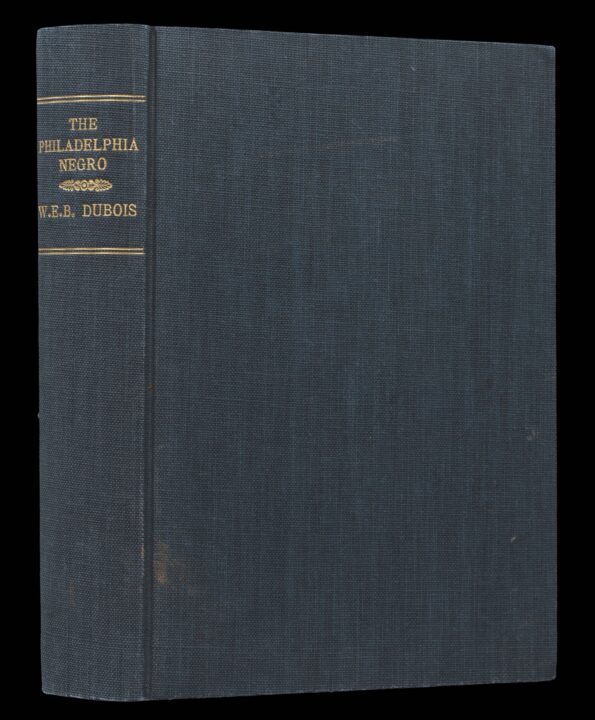 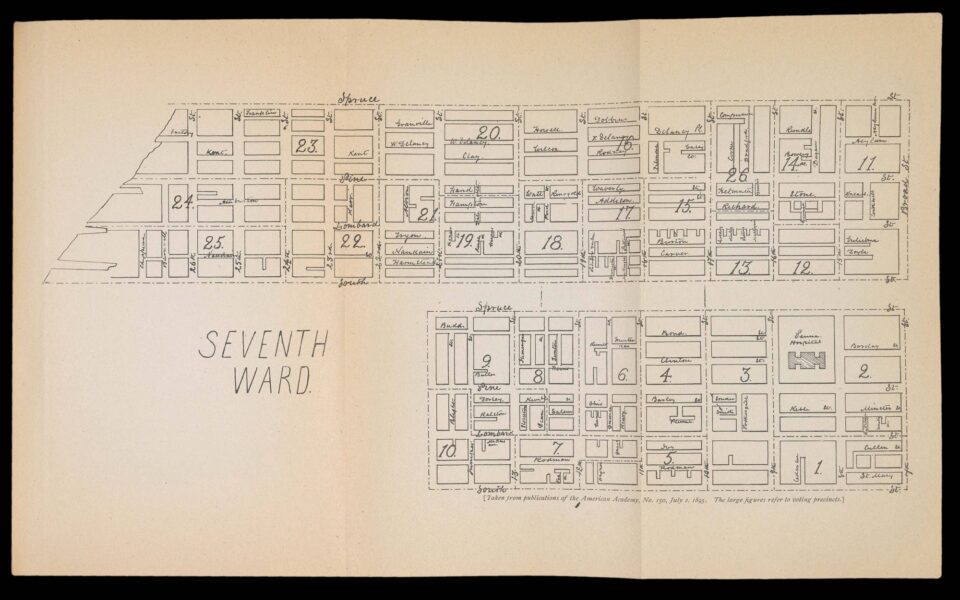 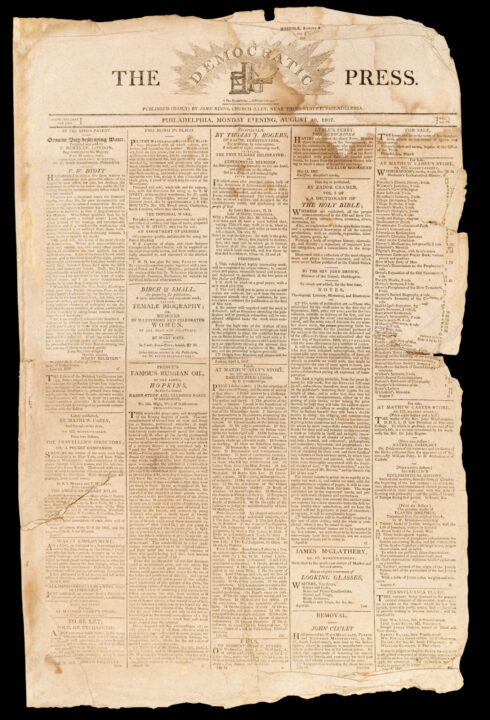 Precipitous prospectus for Lewis and Clark’s monumental work,… a whole seven years before it was finally published