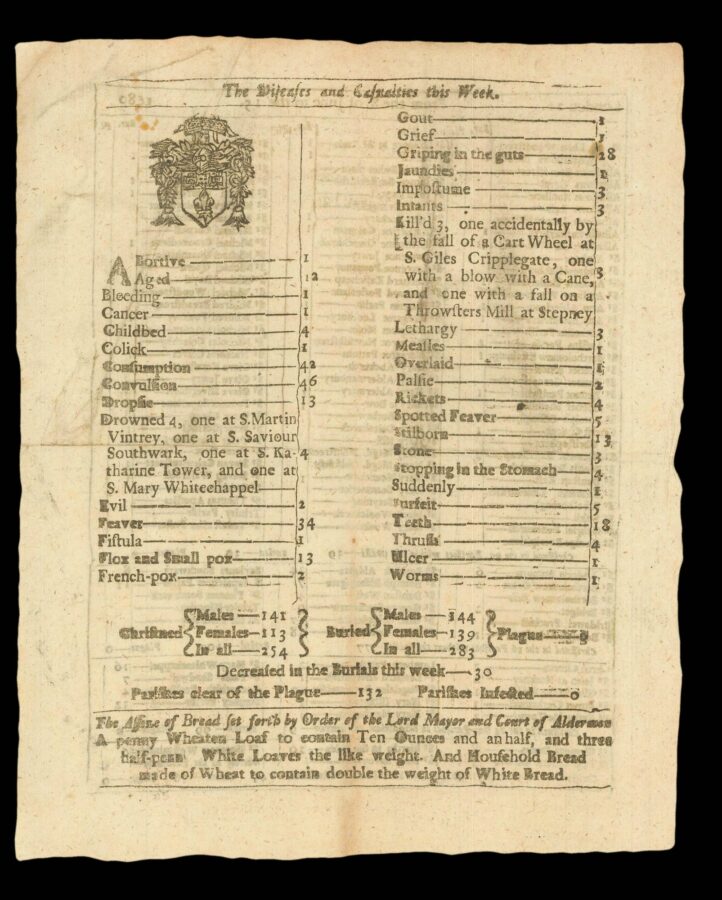 The Diseases and Casualties this Week. London 26.

Since 1593, each of the parishes of London compiled a weekly census recording the births and baptisms of their population. From the early 1660s, ​‘Bills of Mortality’ [as here] were introduced to provide statistics on deaths caused by the plague. Until the 1830s they were the main source of mortality statistics.

This Bill, for the second week of August, 1679, reveals a striking statistic: of the total 579 bodies buried, only 208 were Christened. As only 14 babies were stillborn, the remainder must therefore have been itinerant and christened elsewhere, or of other faiths. The most disproportionate rates of death recorded (Christened versus un-Christened) occurred in the parishes ​“without the walls”, and in Middlesex and Surrey. Since ​“Griping of the guts” resulted in one hundred and sixty-one deaths, unsanitary conditions at the height of the summer heat may have made an overwhelming contribution. Many others died of Consumption (59), or Convulsion (75), or Feaver (62), but three drowned, and six were ​“Kill’d”. Of these latter, ​“one at S. Martin in the fields, one with a Sword at S. Dunstan in the West, two by a damp in a Well at S. Saviour Southward, and two by a wonderful flash of Lightening and Thunder at S. Mary Newington”. No one died of the plague.

Soon scholars, such as John Graunt (1620–1674), most famously in his ​‘Natural and political observations mentioned in a following index and made upon the bills of mortality…with reference to the government, religion, trade, growth, ayre, diseases, and the several changes of the said city’ (1662), were making observations and drawing conclusions from these statistics. Gaunt ​“was the first to recognize the importance of vital statistics and the need for reducing them to order, which he found to be possible by mathematical calculation, leading to important conclusions on the social and economic conditions of the people…” (PMM). 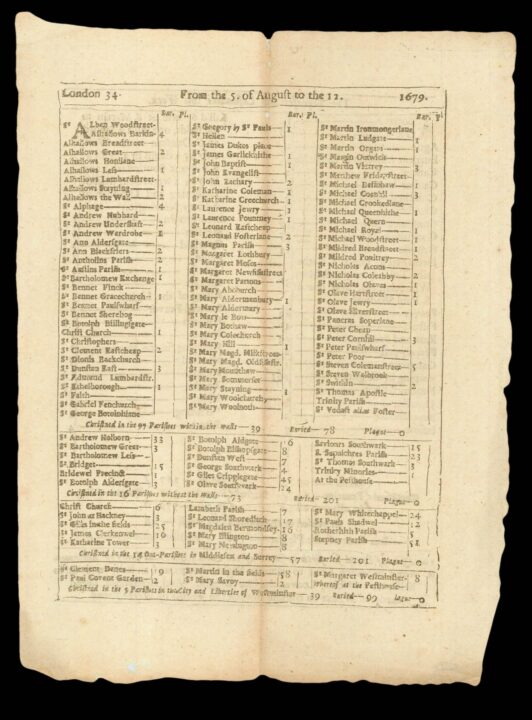