Commissioning Bigge’s inquiry: ​“While transportation to New South Wales is thus applied as an adequate punishment for the most heinous offences, it unfortunately, at the same time, carries with it, in public estimation, so little of apprehension in any proportion to the guilt of convicts, that numerous applications are made from those who are sentenced to imprisonment for minor transgressions, that they may be allowed to participate in the punishment to which the greatest offenders are condemned” (page 4).

- ​‘New South Wales. Report of the Commissioner of Inquiry into the State of the Colony of New South Wales’. Ordered, by The House of Commons, to be Printed, 19 June 1822. Number 448. First issue, including the libel of William Wentworth.

- ​‘Report of the Commissioner of Inquiry on the Judicial Establishments of New South Wales, and Van Diemen’s Land’. Ordered, by The House of Commons, to be Printed, 21 February 1823. 33

- ​‘Report of the Commissioner of Inquiry, on the State of Agriculture and Trade in the Colony of New South Wales’. Ordered, by The House of Commons, to be Printed, 13 March 1823. Number 136


- ​‘New South Wales… No. 1 – Copy of a Report, by the late Major General Macquarie, on the Colony of New South Wales, to Earl Bathurst; in July 1822. No. 2 – Extract of a Letter, from Major General Macquarie to Earl Bathurst, in October 1823; in Answer to certain Part of the Report of Mr. Commissioner Bigge, on the State of the said Colony’. Ordered, by The House of Commons, to be Printed, 25 June 1823. Number 477

In 1819, John Thomas Bigge accepted an appointment as commissioner of inquiry into the colony of New South Wales. His arrival in the colony came as quite a shock to Governor Lachlan Macquarie, who, since 1810, had governed with an emancipist policy that was ahead of his time. He had asserted ​“a complete personal control, had converted New South Wales from a rebellion-torn penitentiary to a settlement of substance. In his personality were mixed a broad sense of justice and a humanity far ahead of Georgian concepts, manifest in his willingness to readmit emancipated convicts to society without any regard for their past. To Bigge such an attitude was incompatible with Tory concepts of the purpose of the criminal law and, with added prejudice from his experience in slave colonies, he assailed Macquarie’s methods vehemently. The governor, long unused to a superior, affronted by the challenge to his authority and resentful of Bigge’s frequent proposals for changes, was not prepared to submit quietly” (Bennett).

Bigge’s resulting three extensive reports were, in Macquarie’s opinion, a ​“false, vindictive and malicious” indictment of his tenure. His response was slow to come, as he waited until all three reports were published, but when it did, in 1823, it was another five years before it was published, as here. Nevertheless, history has vindicated Macquarie.

Collectively, Bigge’s reports, prompted the insertion of clauses into the New South Wales Act that set up limited constitutional government through a Legislative Council, to establish Van Diemen’s Land as a separate colony, to enable extensive legal reforms, and to make new provisions for the reception of convicts from England. 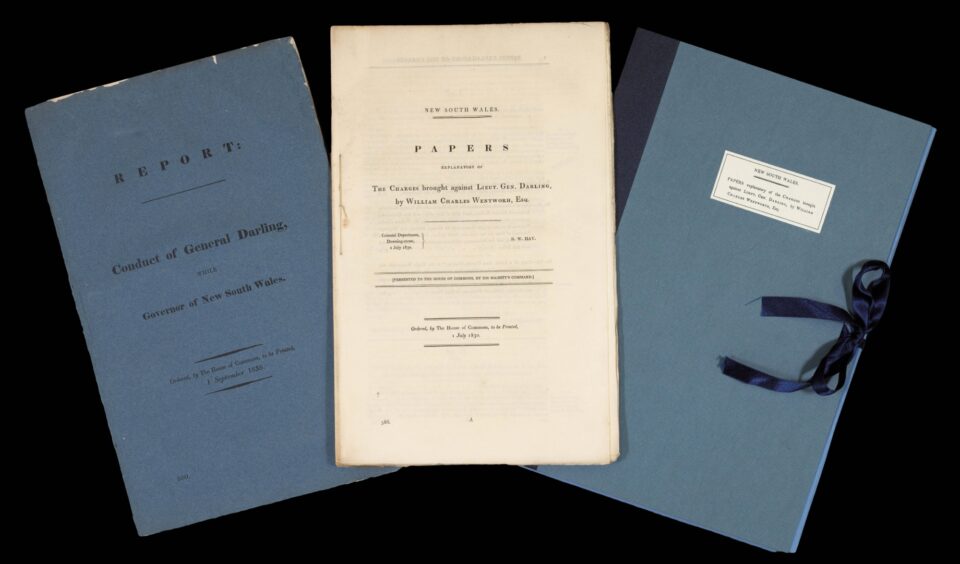 First inklings of self-government and nationhood for Australia