“An important and scarce collection, which includes accounts of all the principal early Australian voyages” from the author of Manon Lescaut

A fine set of the scarce complete Paris edition of this very extensive collection of voyages.

​“An important and scarce collection, which includes accounts of all the principal early Australian voyages … as well as an account of the discovery of Australia by the Dutch, early voyages to New Guinea and the Palau islands, and Roggeveen’s voyage to the Terres Australes. African voyages include the early Portuguese and English voyages to West Africa and the Cape of Good Hope, with a general account of the Dutch at the Cape. Pacific voyages include those of Magellan, Schouten and Le Maire, Drake, Sarmiento, Cavendish, Spilbergen, Narborough, Rogers, Cowley, Frezier, and Anson. Particularly full accounts are given of the Dutch and French voyages to the East Indies, voyages to China, and the British East India Company’s voyages to India and Ceylon” (Hill).

The first seven volumes are a translation of the first four volumes of Green’s Collection (published by Astley, London 1745–1747), while volumes VIII–XV were compiled by Abbe Prevost, with volumes VIII–XI on the East Indies and Asia and volumes XII–XV on the Americas. Volume XVI is the index printed by Didot’s widow and volume XVII is a supplement of new voyages to the East Indies, taken from the edition printed at The Hague in 25 volumes (1747–1780). Volumes XVIII–XX are the continuation by Meusnier de Querlon, A. Deleyre, and Roussellot de Surgy, with voyages to the Arctic regions, and the final volume is devoted to the voyages of Cook, Wallis, Byron, and Bougainville. All the principal early voyages to the Pacific are included, as well as those to Africa, Asia, and the Americas. The many plates and maps are variously engraved by Cochin fils, Tardieu, and others from the original published voyages and all are strong, crisp impressions. Brunet notes that, although prepared in haste and perhaps a little lacking in method, this collection ​“n’est certainement pas sans merite” and could even be said to be preferable to the edition published in The Hague, adding that volume XX is frequently lacking and difficult to find. This is because the first edition of the final volume was printed in the tumultuous early days of the French Revolution. Because so few copies were printed, it had to be especially reprinted in 1802 for owners to complete their sets.

L’Abbé Antoine-Francois Prévost d’Exiles (1697–1763) was a French novelist, perhaps best known as the author of Manon Lescaut, although, according to Diderot, his lifetime’s output amounted to some 200 volumes. The Encyclopedie relates the unusual manner of Prevost’s death: Prévost had been walking in the woods near his country house in Saint Firmin, near Chantilly when he suffered a sudden attack of apoplexy. Some locals found him and summoned the Gendarmerie who, in turn, summoned a doctor, who pronounced Prévost dead. As foul play was suspected, the doctor was asked to perform an autopsy on the spot. The doctor then plunged a scalpel into Prévost’s stomach, who, being still alive, let out a great cry and then expired, victim of the doctor’s stab wound!

The success of the ​‘Histoire des Voyages’ was such that it was copied and republished in French, in the Netherlands and, in one form or another, in German, Dutch, Italian, Danish, Russian, and Spanish, including copies of the maps by Bellin in those languages. The series was republished by J.F. La Harpe as ​‘Histoire générale des voyages de M. l’abbé Prévost, abrégée et rédigée sur un nouveau plan’, 1780–1801 in a 32 volume, 8vo version, and a 126 volume, 12mo version.

Bellin’s output was enormous, and his maps were copied throughout Europe for decades. In addition to the maps included in the ​‘Histoire des Voyages’, he produced, among other works, ​‘Le Neptune Françoise’ (1755) and ​‘Le Petit Atlas Français’ (1763), reissued as ​‘Le Petit Atlas Maritime’ in 1764. 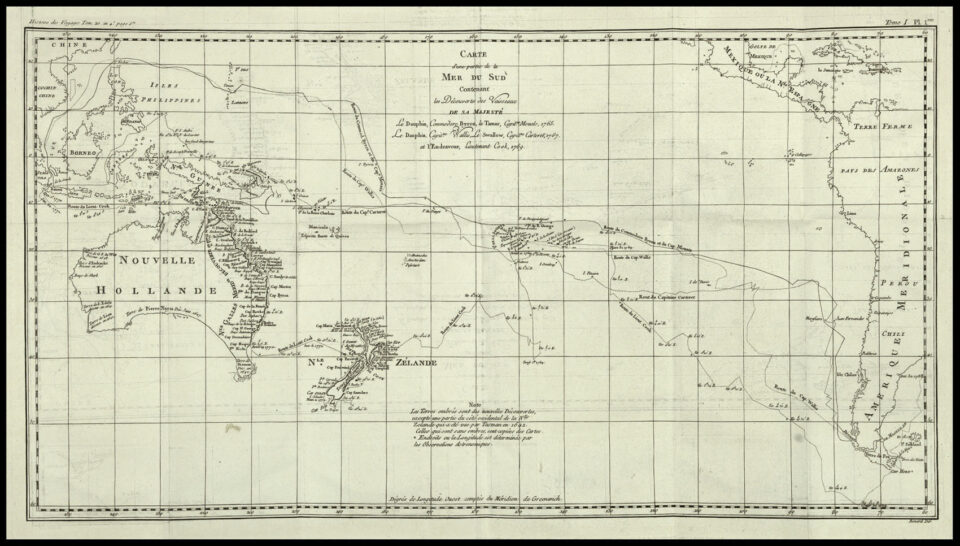