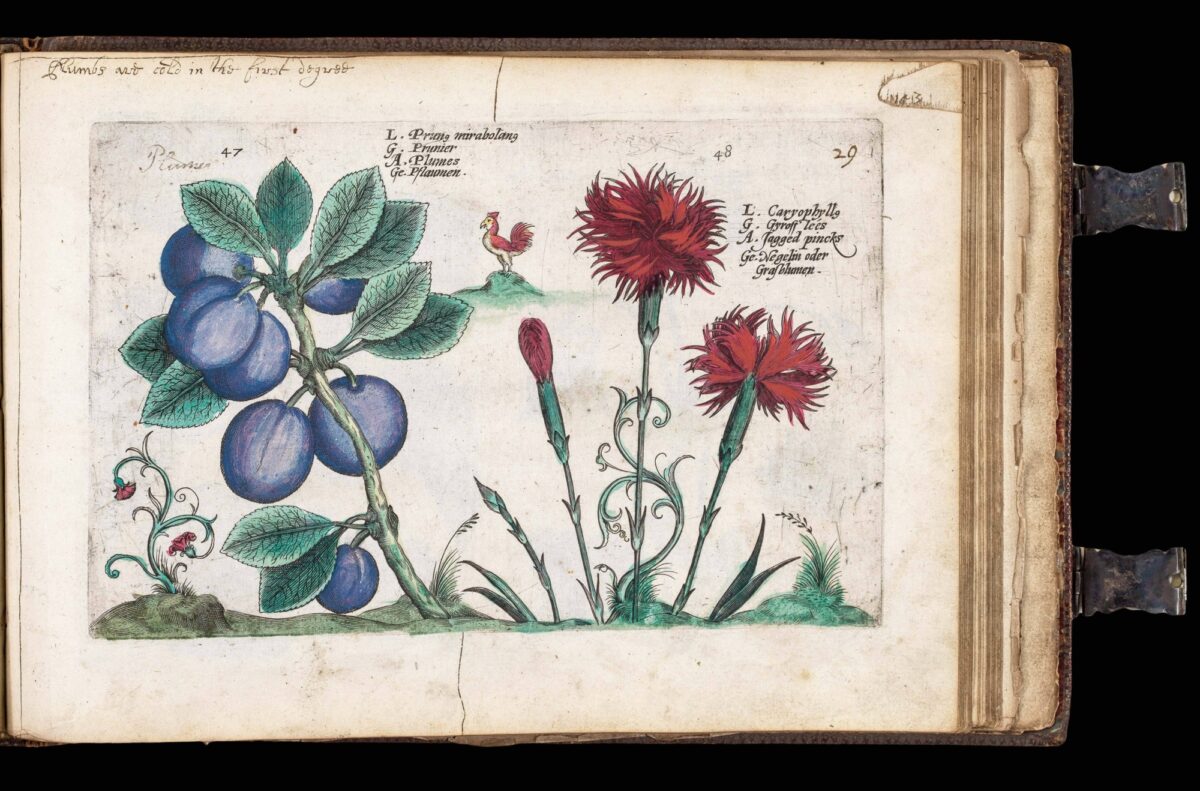 An album of engravings from the most famous natural history artists of the late sixteenth and early seventeenth centuries, collected and bound for an English patron

A magnificent album of natural history engravings, collected and bound for an English patron, containing two complete suites of plates: Hoefnagel’s ​‘Diversæ insectarum volatilium’; and Woutneel’s ​‘Cognoscite lilia agri quomodo crescent’, often bound as the fifth part, ​‘Altera Pars’, to the Crispin de Passes’ ​‘Hortus Floridus’ — the ​“most ambitions, if not the first, early effort to employ Continental resources to produce a set of [botanical] engravings designed for the English market” (Gerard); and nine near complete, or partial suites, including an early issue of tulip plates from the ​‘Hortus Floridus’.

All plates have been numbered consecutively in manuscript at the time of binding to a rudimentary scientific rubric: insects first, then aquatic animals, quadrupeds, birds, and botanicals last, but not least. As a result, some plates are bound with like subject rather than with their original publications.

The album represents the work of some of the most famous natural history artists of the late sixteenth and early seventeenth centuries. The majority are published by Claes Jansz Visscher (1587–1652), the most important publisher of prints and maps in Amsterdam of his day. Recorded as an engraver in Amsterdam as early as 1608, he built a distinctive inventory of prints after the designs of Flemish artists, which proved extremely popular and formed the basis of Visscher’s early success as a publisher.

Engraved title-page, complete with 15 numbered plates of insects, misbound including some upside-down, bound with plates 11 and 12 from ​‘Volatilium varii generis effigies’ after Nicolaes de Bruyn, all with contemporary hand-colour heightened in silver, consecutively numbered in an early hand 1–18.

North German insects, with the exception of the tarantula and scorpion. Engraved by Visscher after those by Jacob Hoefnagel, 1573–1632, court painter for Emperor Rudolph from 1607, son of Joris Hoefnagel, whose drawings of animals, flowers and insects he engraved and published as the ​‘Archetypa Studiaque Patris Georgii Hoefnagelii’ (1592). He also engraved plates for Braun and Hogenburg’s ​‘Civitates Orbis Terrarum’ (1512 — 1617).

Engraved allegorical title-page for ​‘Libillus’, 11 (of 12, without the sea-horse) plates of aquatic animals and sea-monsters; 19 (of 20) engraved plates of aquatic animals, numbered in an early hand 19–44, followed by the allegorical title-page for ​‘Piscium’, numbered 45, all with contemporary hand-colour, all annotated in an early hand with common names in English.

An early state of the title-page for de Bruyn’s ​‘Libellus’ before correction. Nicolaes de Bruyn (1571–1656) is best known for his large engraved landscapes ​“after designs by artists such as Gillis van Coninxloo and David Vinckboons from around 1600… his pupil and brother-in-law [was] Jan van Londerseel” (Hollstein online)

A near complete suite of plates from a later edition of Collaert’s famous work on fish, first published in about 1598, in which the original engravings included elaborate landscape backgrounds. For his version, Claes Visscher has incorporated his harpoon monogram into the dramatic title-page. Collaert (1560–1618) married engraver and publisher Philippe Galle.

Engraved allegorical title-page, 7 (of 12) plates of mermaids and mermen, all with contemporary hand-colour, numbered in an early hand 46, 48–54.

The artistic Bolswert and Bloemaert families of Utrecht seem to have been very close, frequently working together. Bloemaert met a grisly death at the hands of one of his students in 1666.

An early issue, with no text on verso, and captions only in Latin, of a selection of tulip plates from ​“the most popular florilegium ever published” (‘An Oak Spring Flora’). The work was first issued in a number of states between 1614 and 1617, and is often hailed as ​“the most important of early examples of botanical illustration” (Gerard). It was issued in four sections, on for each season, with text in Latin and subsequently a selection of vernacular languages.

Allegorical title-page, 61 engraved plates, captions in Latin, French, English and Dutch, all with early hand-colour, numbered in manuscript 124–185, annotated throughout in two early hands with the months in which they flower, and their medicinal properties in the ​“first”, ​“second” and ​“third degree”, misbound.

The ​“most ambitions, if not the first, early effort to employ Continental resources to produce a set of [botanical] engravings designed for the English market” (Gerard). Complete, a suite of 61 plates depicting 120 plants, published as a separate work in its own right, but often issued as the fifth part of the de Passe’s ​‘Hortus Floridus’, when it appears with an additional letterpress title-page as the ​‘Altera Pars’. An early issue, with no text on verso.

​“Traditionally, the ​‘Alera Pars’ has been considered as an aesthetically inferior appendage to the ​‘Hortus Floridus’ and has received little attention from historians of prints or botanical illustration. However, the presence on the title-page of the imprint of Hands Woutneel (“Joannis Waldelij”), an Antwerp native who was a bookseller and publisher in London from 1576 until his death sometime between 1603 and 1608, implies that the ​‘Altera pars’ had a significant English component. As such, it stands as an early example of Anglo-Continental print publishing collaboration.

Prior to publication of the ​‘Altera Pars’, the demand in England for botanical illustrations had been met primarily by relatively crude, highly schematic, collections of woodcuts, such as those in Jacques LeMoyne de Morgue’s ​‘La Clef des Champs’ (1586) and John Norton’s publication of Gerard’s ​‘Herball’ (1597). The ​‘Altera Pars’, with its more naturalistic depictions of 120 plants, set a new standard and served as the primary source of botanical images for English engravers and publishers from the late years of the reign of James I through the Restoration’ (Gerard).

Hans Woutneel first appears in London on being admitted to the Stationers Company in 1579–80. Cartographer Abraham Ortelius mentions him frequently in his correspondence with his nephew Jacob Cole (Gerard), and Woutneel appears to have worked as Christopher Plantin’s London agent.

A suite of 12 numbered engraved plates of composite natural history subjects, all with early hand-colour, numbered in manuscript 187–198, 11 with the joint imprint of Assuerus van Londerseel and Claes Visscher.

In the style of Hoefnagel’s ​‘Archetypa Studiaque ‘, 1592, this is a very scarce suite of plates, with only one uncoloured set known, in the British Library.


1. Annotated throughout in an early English hand.

2. Later ownership inscription to front free endpaper, ​‘Mr Francis Mackenzie Jeweller, Parliament Close, His Book, 1809’. Francis Mackenzie was a goldsmith and jeweler, working in Edinburgh at the beginning of the nineteenth century. 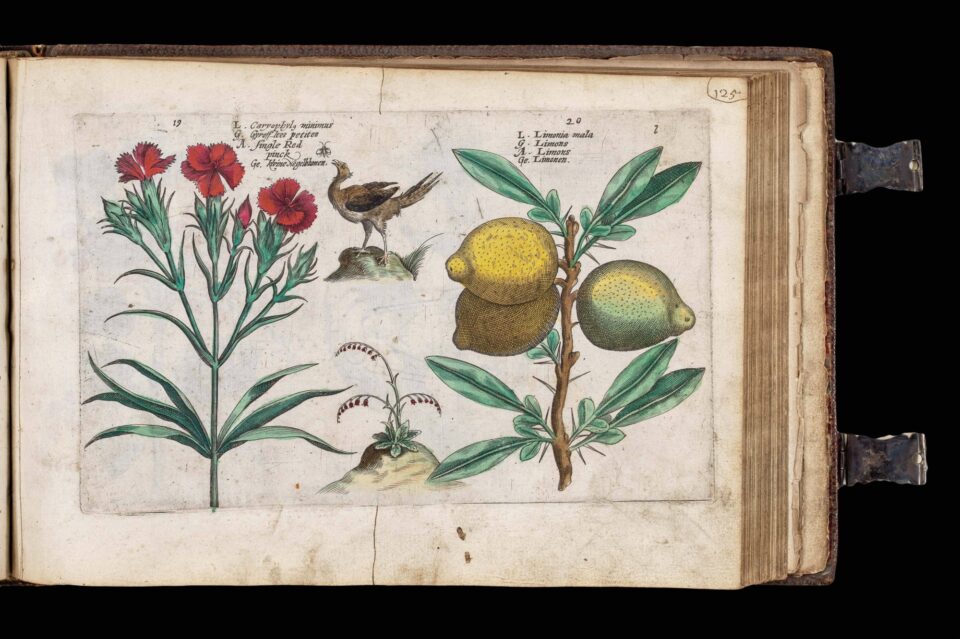 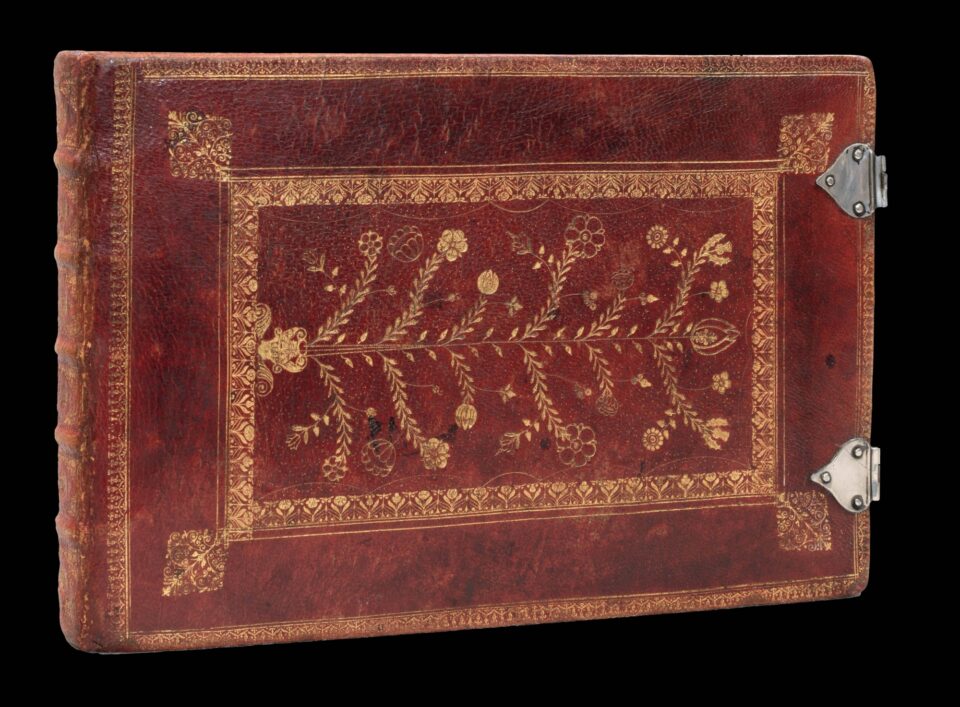 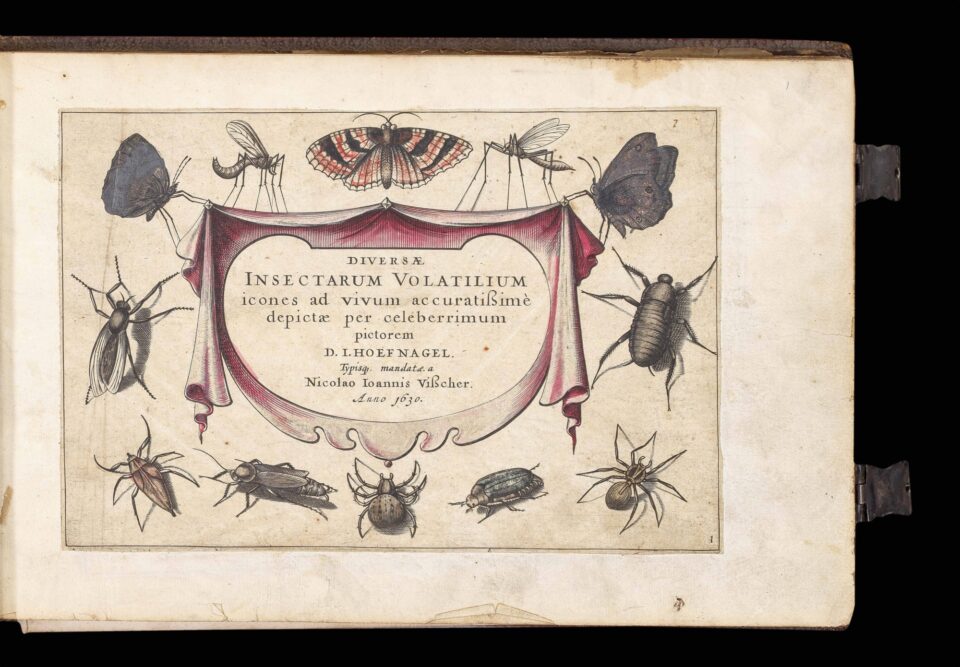 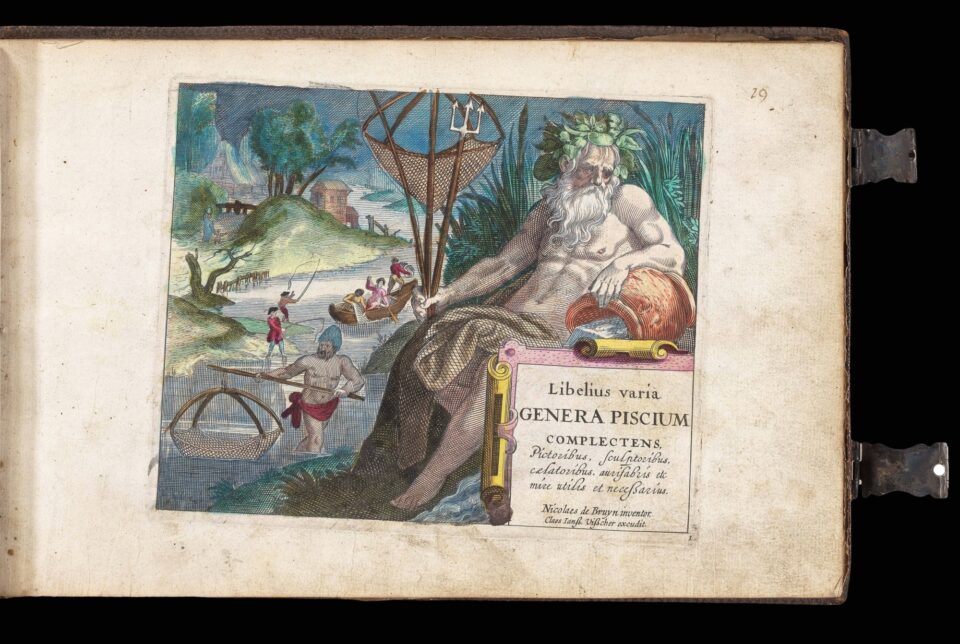 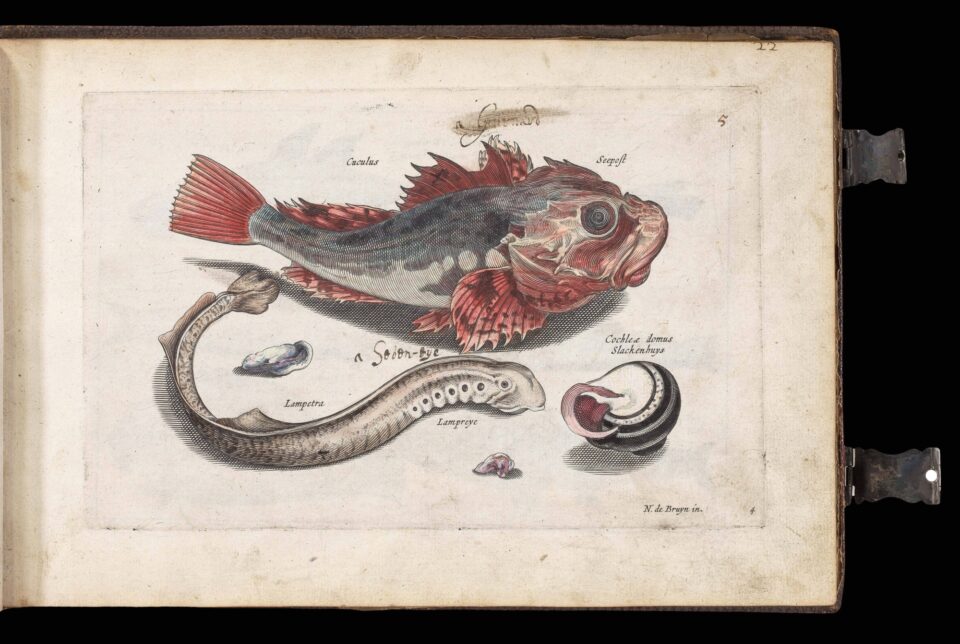 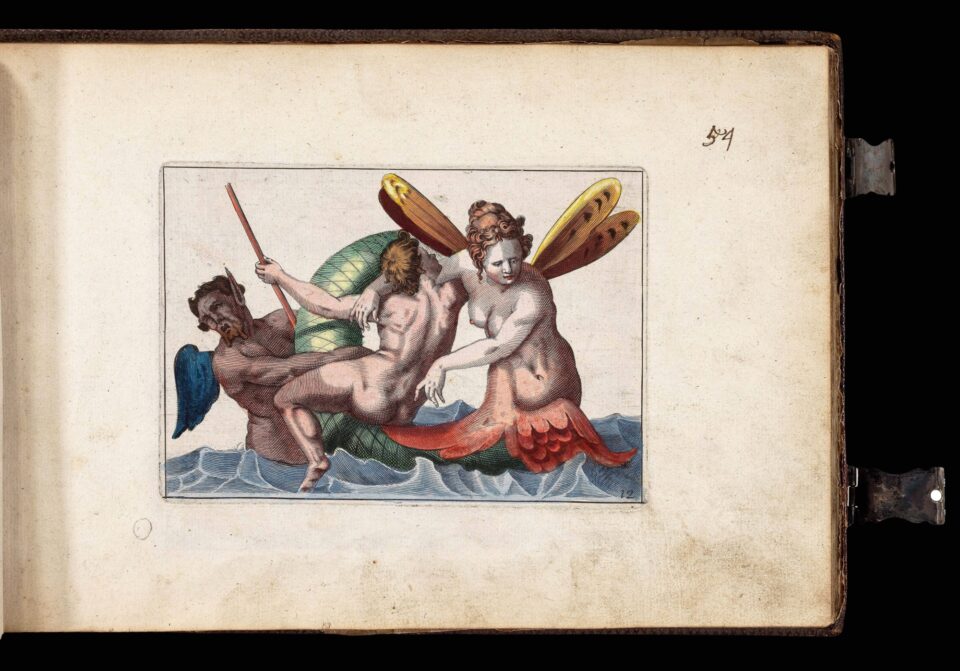 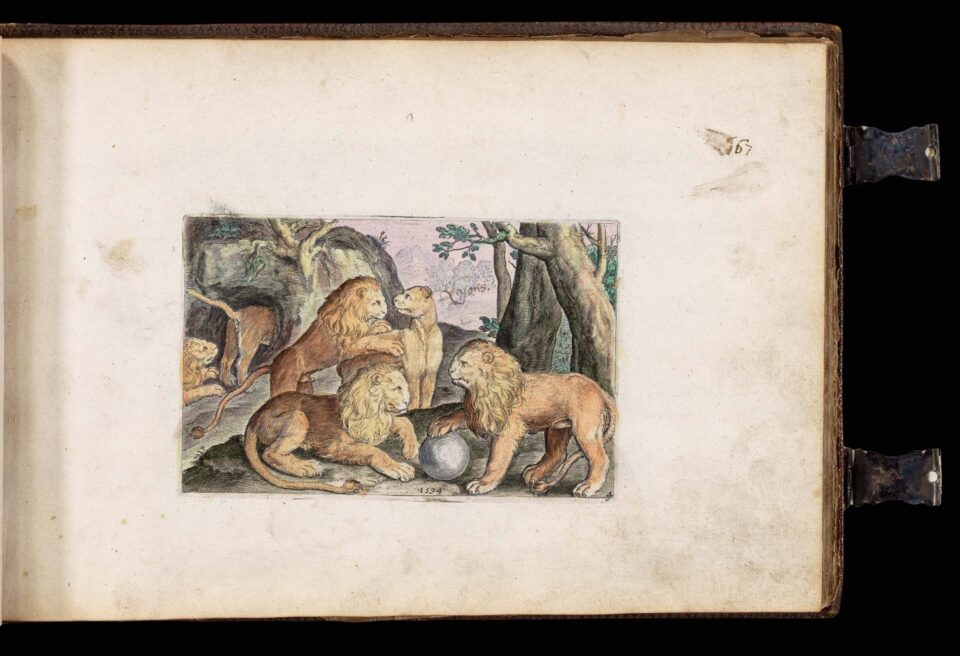 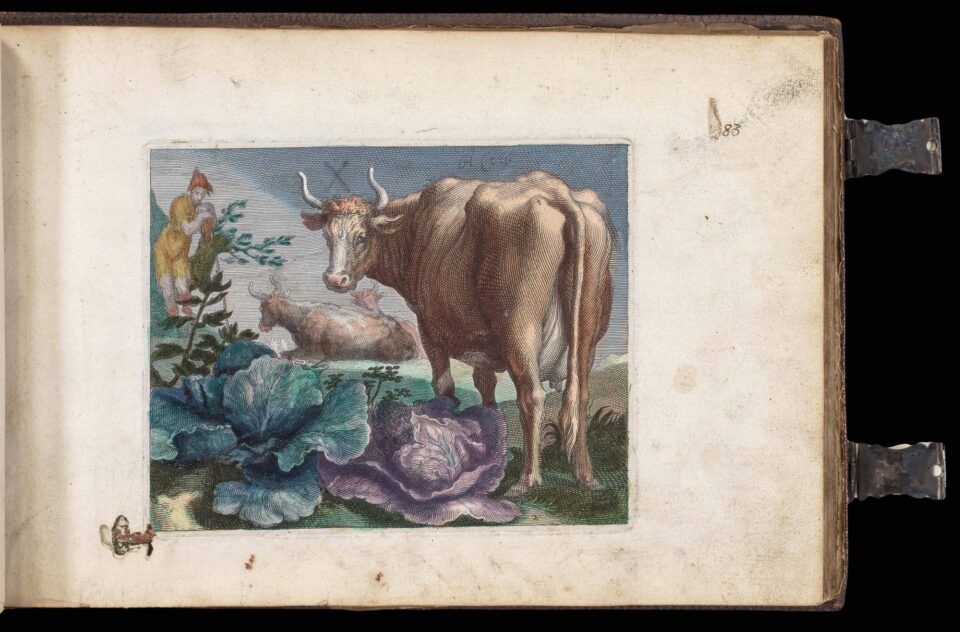 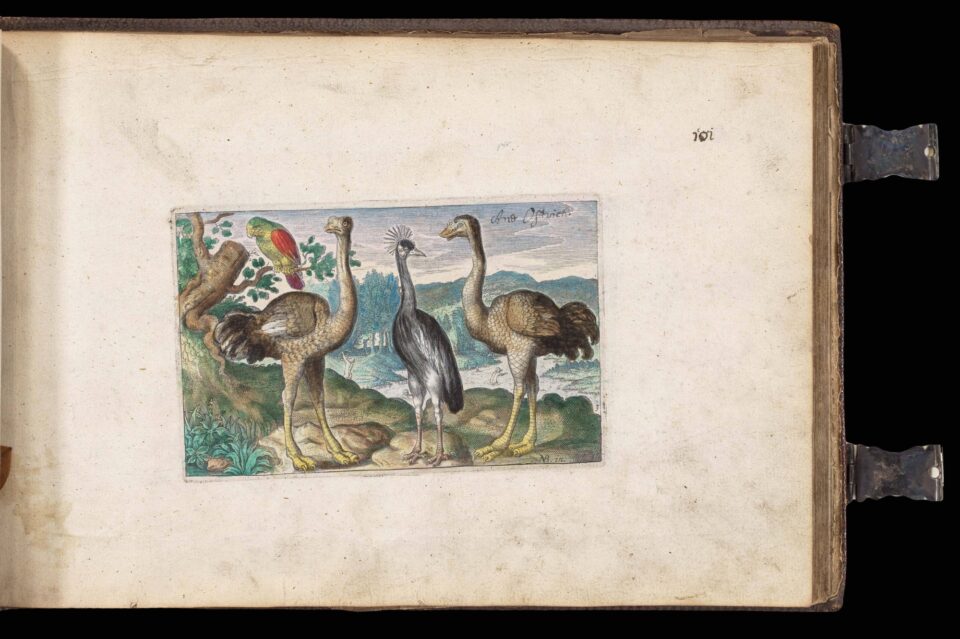