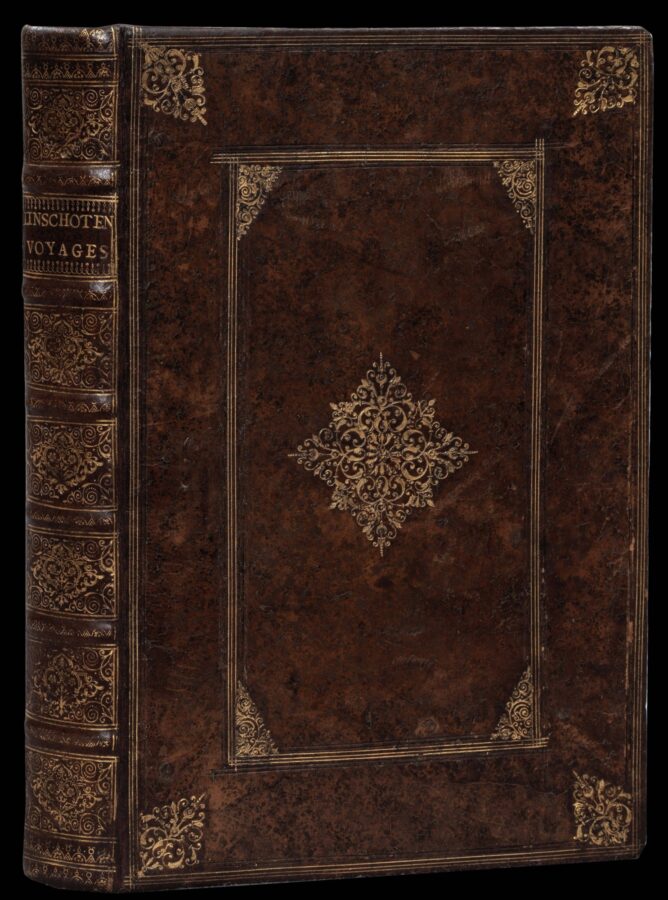 The very rare English edition of Linschoten’s ​‘Itinerario’, first published in Dutch in 1595–1596, and translated from the Dutch by William Phillip.
Linschoten’s ​‘Discours’ is second only to Hakluyt’s ​‘Principall Navigations’ in being the most important collection of sixteenth century voyages in English.
​“This important work contains all the knowledge and learning related to the East and West Indies and navigations to those parts that was available at the end of the sixteenth century. It was held in such high esteem that for nearly a century a copy was given to each ship sailing to India as a guide to the sailing directions. The fact that most copies were in continual use is in no doubt the reason that fine copies, especially with all correct plates and maps, are so very rare” (Hill).
Linschoten (1563–1611) travelled extensively, he went to Goa between 1583 and 1589, and joined Willem Barents’s first and second voyages into the Kara Sea in 1594 and 1595, and he combined his first-hand accounts with translations of original Spanish and Portuguese documents. ​“Linschoten’s work, along with Hakluyt’s, served as a direct stimulus to the building of the vast English and Dutch overseas empires” (Hill). In fact, until its publication, no other book contained anything like the amount of useful information on the East and West Indies, and it soon became required reading for all navigators sailing to the East, with chapters on the coast of ​‘Arabia Felix’, i.e., the southern coast of the Arabian peninsula, the island of Ormus, and Islamic India.
The book is divided into four parts. The first, concerning the East Indies, including eastern Africa and Arabia, and extending to regions as far east as Japan. The second book describes the navigation of the coasts of West Africa around the Cape of Good Hope to Arabia, together with the coasts of the New World. Book three, based on the discoveries of the Portuguese Royal pilot Diego Affonso, contains sailing directions from Portugal to India, and instructions for sailing in the East Indies from island to island. Similar instructions are given for the New World, particularly Brazil and Spanish America. Book four contains detailed information on the taxes, and other income, that the King of Spain extracted from his territories, both at home and overseas.
Most of the maps and views of the English edition are re-engravings of the plates of the original Dutch edition of 1595–1596, with captions in Latin and English.
List of maps and views:
1. ORTELIUS, Abraham. Typus Orbis Terrarum.
2. [East Africa], ​‘The description or Caerd of the Coastes of the Countreys following called Terra do Natal,..’, engraved by Robert Beckit, including the western half of the Indian Ocean along the coast of South Africa, all of Madagascar.
3. [Arabia and the Indian Ocean], ​‘The description of the coast of Abex, The Straights of Meca, otherwise called the Red Sea, the coastes of Arabia, Ormus and Persia…’, engraved by Robert Beckit, extending from the Nile river and the eastern Mediterranean to the Gulf of Bengal and Sumatra. ​“The surprising fact about the representation of the [Arabian] peninsula is the close resemblance of the outline to that of a modern map when compared with other engraved maps of the time. There is a vague suggestion of the Qatar peninsula, which is not seen again until the nineteenth century” (Tibbets).
4. [Southeast Asia], ​‘The Trew Description of All the Coasts of China, Cauchinchina Camboya, Syao, Malacca, Arraacan, and Pegu,…’, engraved by Robert Beckit, after the original engraved by Johannes a Doetechum extending from the island of Korea and Japan south of ​‘Beach’ (Australia), Java, Timor, the Philippines, the Indochina peninsula, and most of the coast and much of the interior of China. Schilder Australia 18; Schilder Monumenta Cartographica Neerlandici VII, p 222ff; Suarez SE Asia fig 91.
5. [Africa], ​‘A discription of Aegipt from Cair downeward’, engraved by William Rogers, a magnificent map of Africa after Pigafetta.
6. [West Africa], ​‘The description of the Coast of Guinea,…’, engraved by Raygnald Elstrak.
7. [Mozambique], ​‘The description of the Islandes and Castle of Mozambique…’, engraved by William Rogers.
8. [St. Helena].
a) ​‘The Island of St. Helena full of Sweet and pleasaunt ayre fructfull ground and fresh water…’,
b) ​‘The true description, and situation of the Island St. Helena, on the East, North, and West Sydes’, both engraved by Raygnald Elstrak.
9. [Ascention Island], ​‘The True Description of the Island of Ascention…’, engraved by William Rogers.
10. [South America], ​‘The description of the whole coast lying in the South Seas of Americae called Peru…’, engraved by Robert Beckit, showing the whole of South America, the Caribbean, Florida, the Gulf Coast and an extended Terra del Fuego.
11. [The Spice Islands Map], ​‘Insulae Molucca celeberrimae …’, engraved by Robert Beckit, including the eastern coast of india, Borneo, Java, New Guinea and the Solomon Islands, after the original by Petrus Plancius who obtained his information covertly from the Portuguese maps of Bartolomeu Lasso. 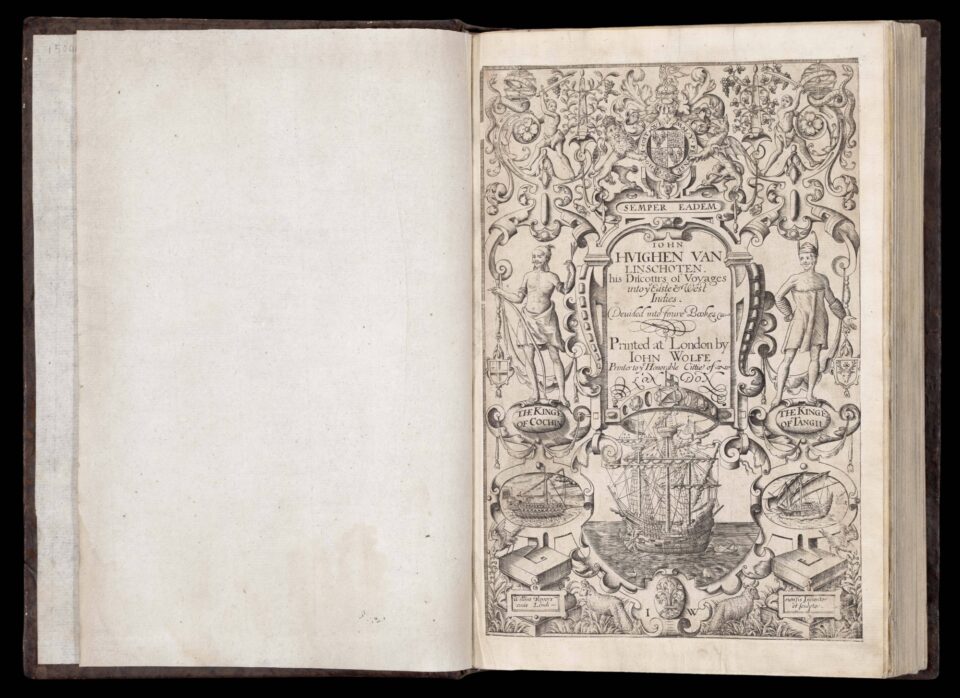 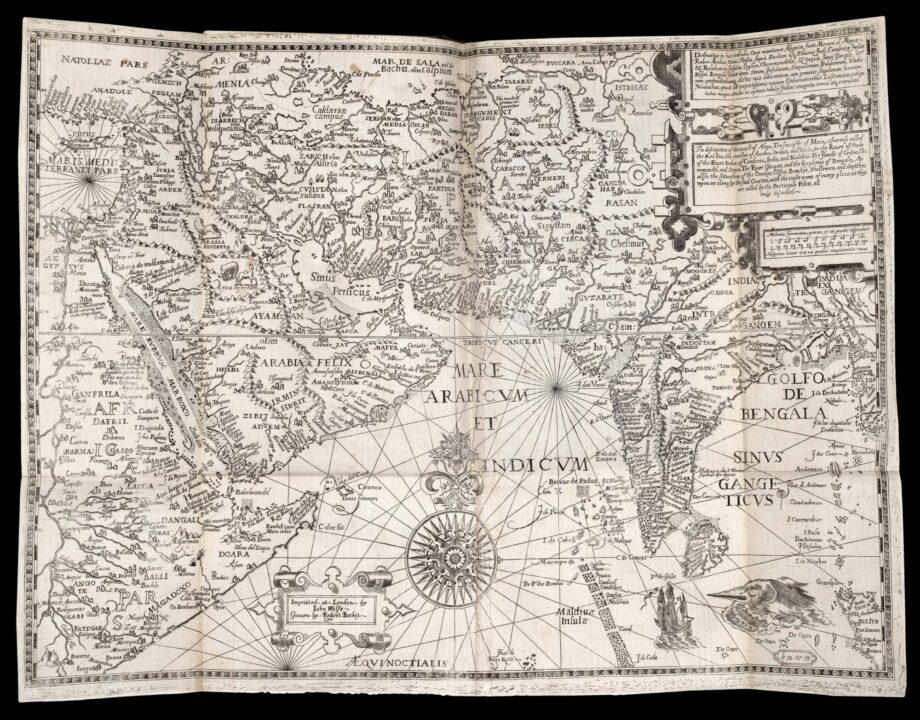 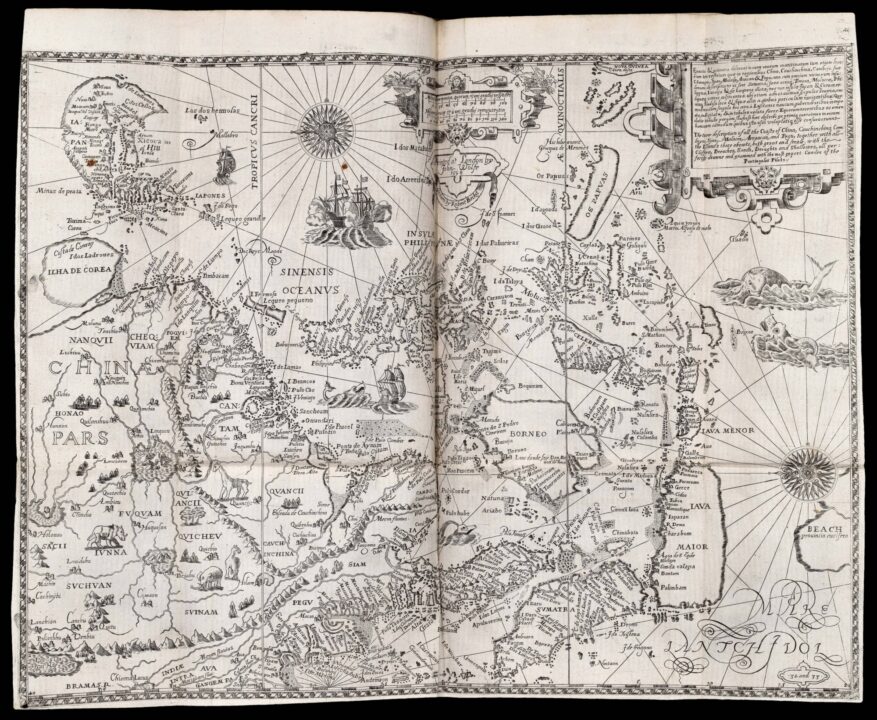 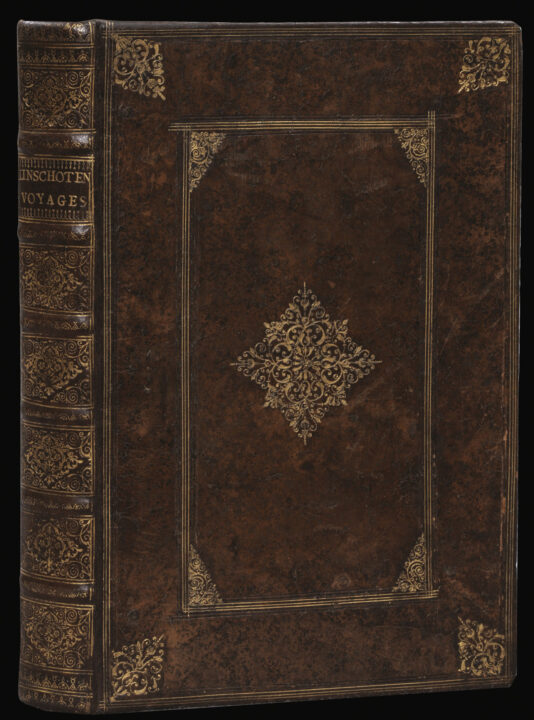 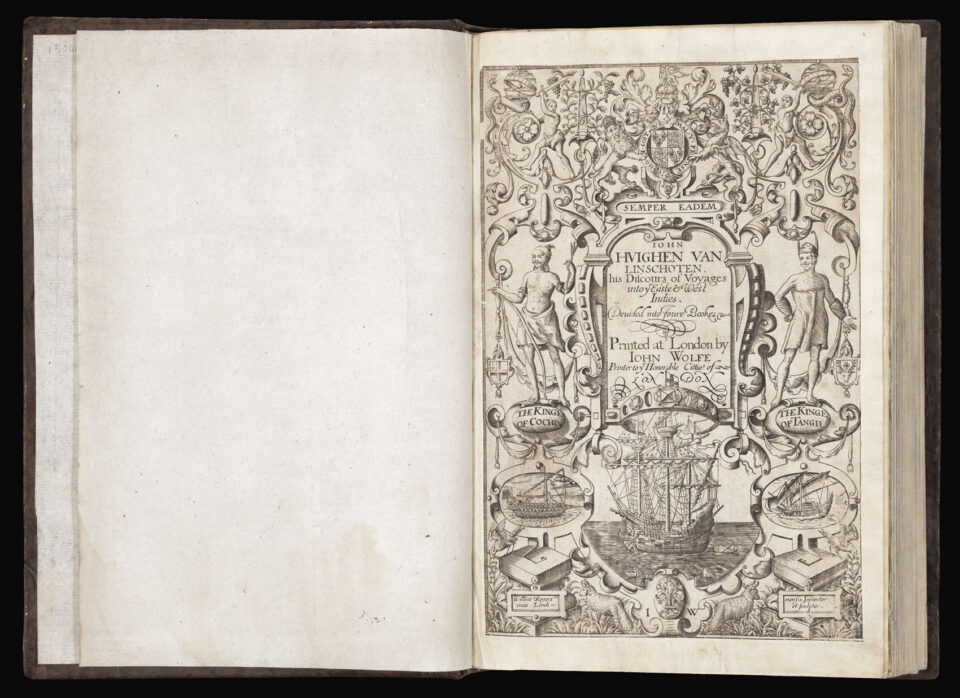 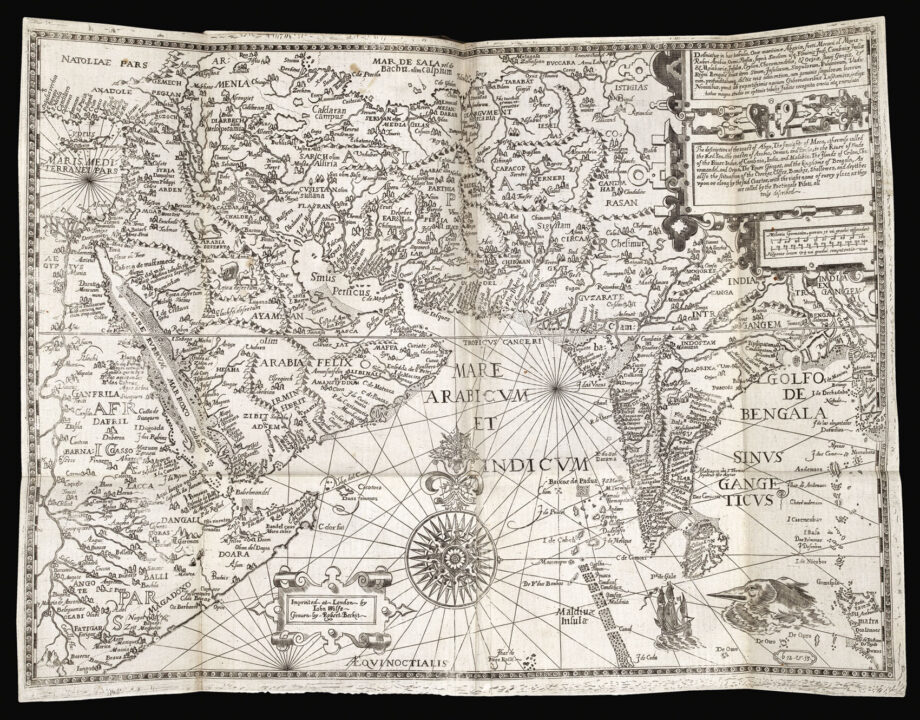 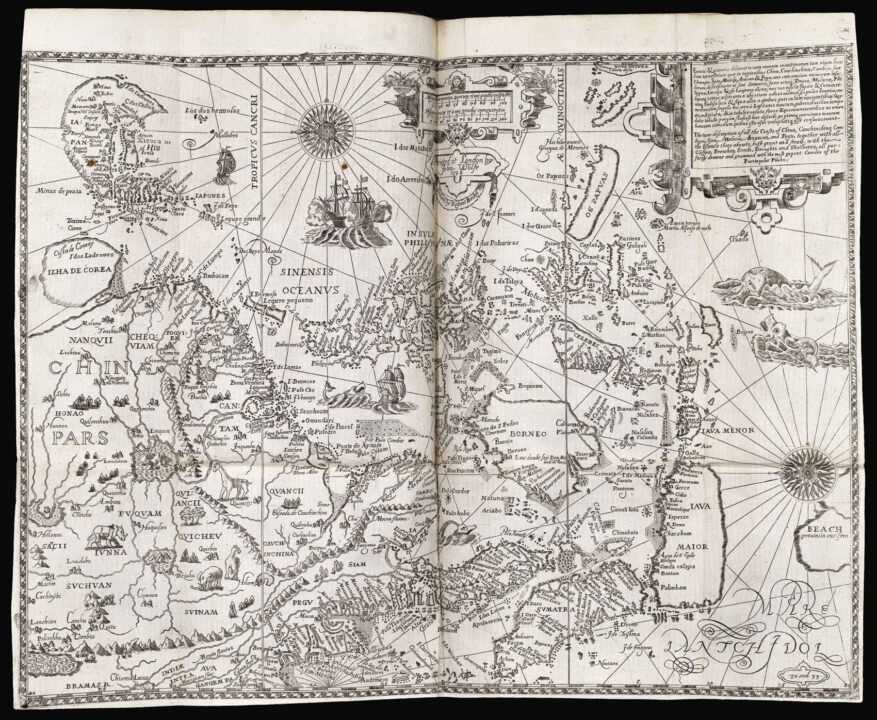 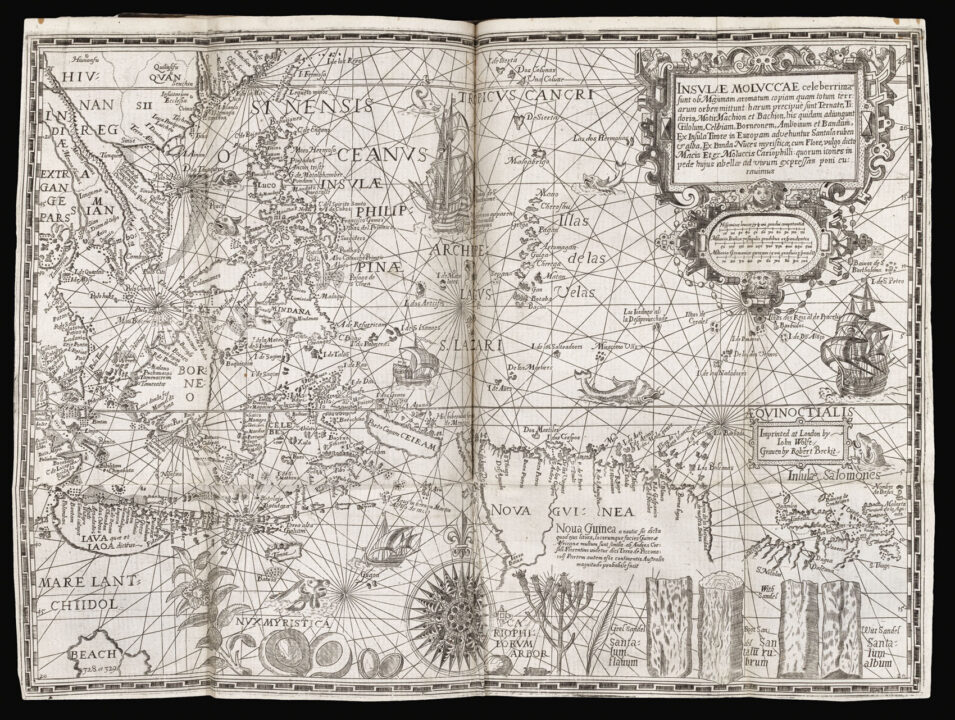