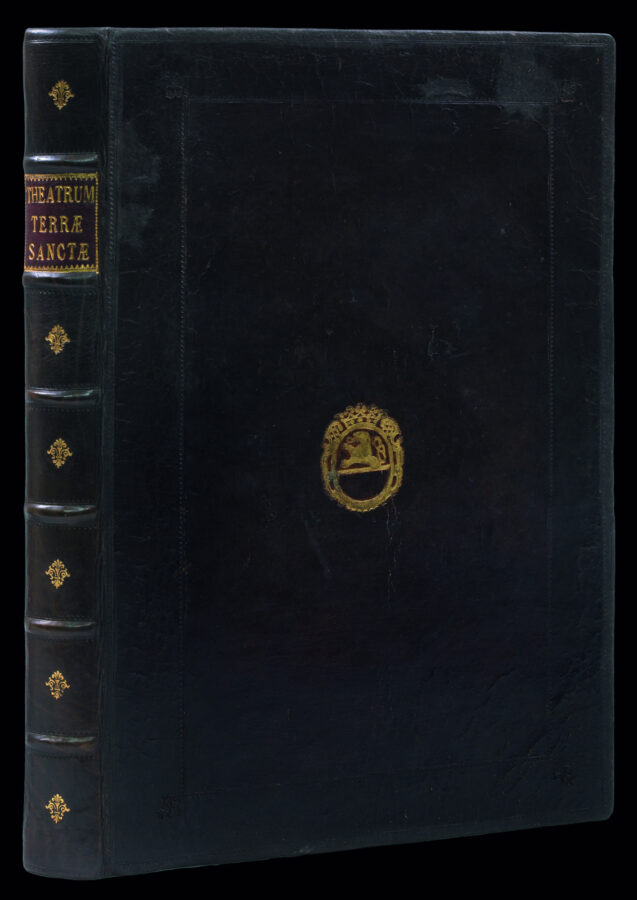 An exceptional example of the first edition of Adrichom’s description of the Holy Land, rarely found with the iconic plates in contemporary hand-colour, including the impressive and important panorama of the Promised Land: ​‘Situs terrae promissionis ss bibliorum intelligentiam exacte aperiens…’ extending to four feet in length; and a large and detailed plan ​‘Jerusalem et suburbia eius…’, which Nebenzahl describes as the ​“most dramatic and important of the sixteenth century”.

The sweeping panorama of the Promised Land is oriented to northeast and extends from the Nile Delta to Sidon, showing the lands of the Twelve Tribes and numerous biblical scenes including the Exodus, Jonah and the whale, and the wandering of the Children of Israel. The sea is decorated with vessels and sea monsters. The title appears in a banner with Adrichom’s coat of arms in the centre, and a compass rose to the lower left. Adrichom’s sources for the map included Peter Laicksteen and Christian Sgrooten, Tilleman Stella, Jacob Ziegler, Sebastian Munster, Gerard Mercator, Buchard of Mt. Sion, Josephus, Jerome and Ptolemy; and in turn was used as a source by Jan Jansson and Nicholas Visscher.

Adrichom’s intricate plan of Jerusalem, oriented to the north, remained the definitive layout of the city until archaeological discoveries during the nineteenth century, but is more than just topography. It is also a narrative, including the fourteen stations of the cross, the Crucifixion and Resurrection of Christ. Outside the walls are the encampments of the city’s historic invaders; the ancient City of David and Mount Sion are to the south. Besides the Bible, Adrichom used a broad spectrum of sources for his plan, including Bernhard von Breydenbach’s panorama of the city, Sebastian Munster’s view, and the texts of pilgrims Burchard of Mt. Sion and William Wey. In all more than 250 places are identified and numbered, and then described in Adrichom’s text.

Published posthumously, Adrichom’s account of the Holy Land was the result of 30 years’ hard work. It consists of three main parts: the geography of Palestine; a description of Jerusalem; and the chronology of Adam up to the death of St John the Evangelist, and then beyond to 1585 when Adrichom died. Composed from the works of Josephus, the Bible, and more modern authorities such as Bochart and Villalpandus, as well as from accounts of recent travelers, Adrichom intended his magnum opus to extend to three volumes. Two further parts were published posthumously by Georg Braun in 1590, with subsequent editions in 1593, 1600, 1613, 1628, and 1682.

Christiaan van Adrichom (1533–1585) was born of a noble family at Delft in the Netherlands, and died in exile at Cologne.

M. Slatkine, pencilled ownership inscription dated 1952 on the verso of the final blank, possibly a member of the renowned Swiss publishing house. 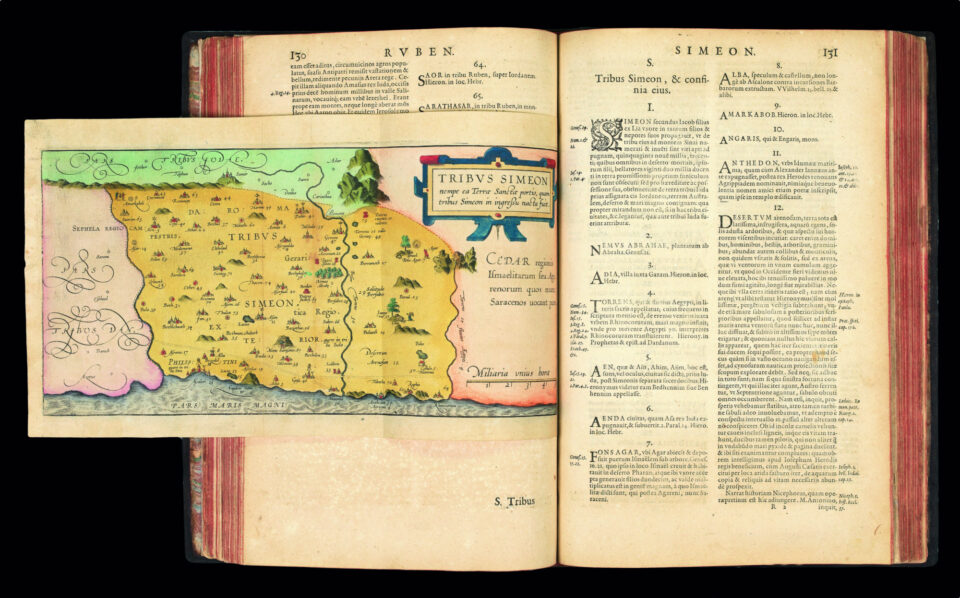 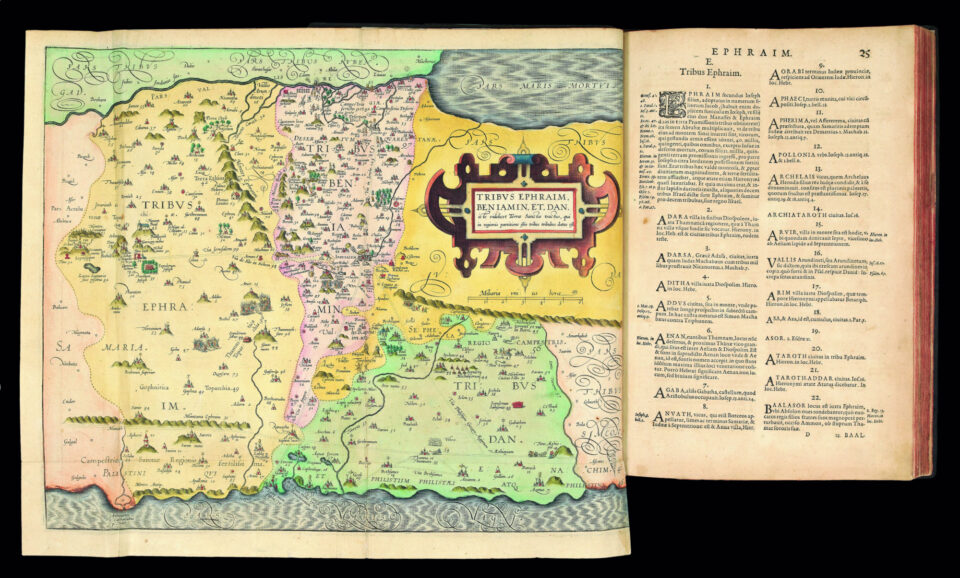 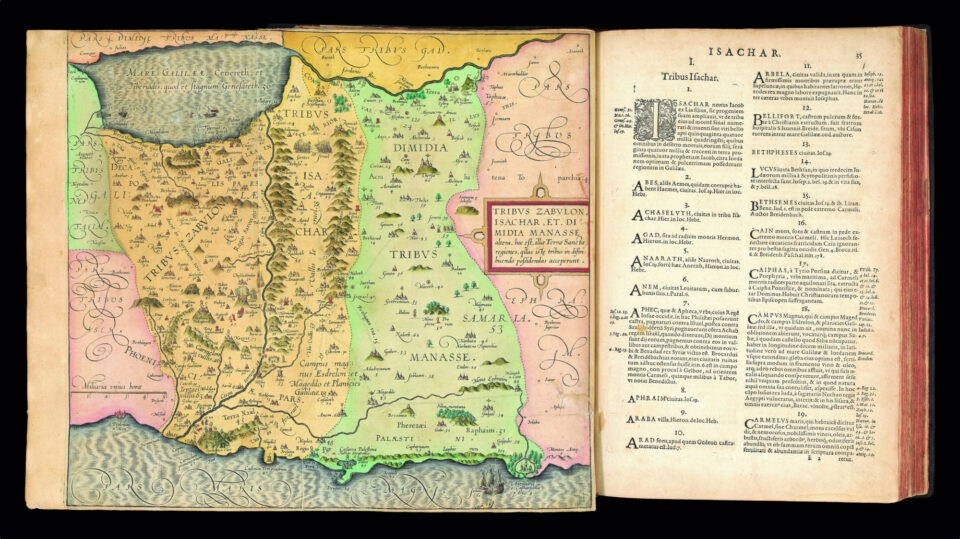 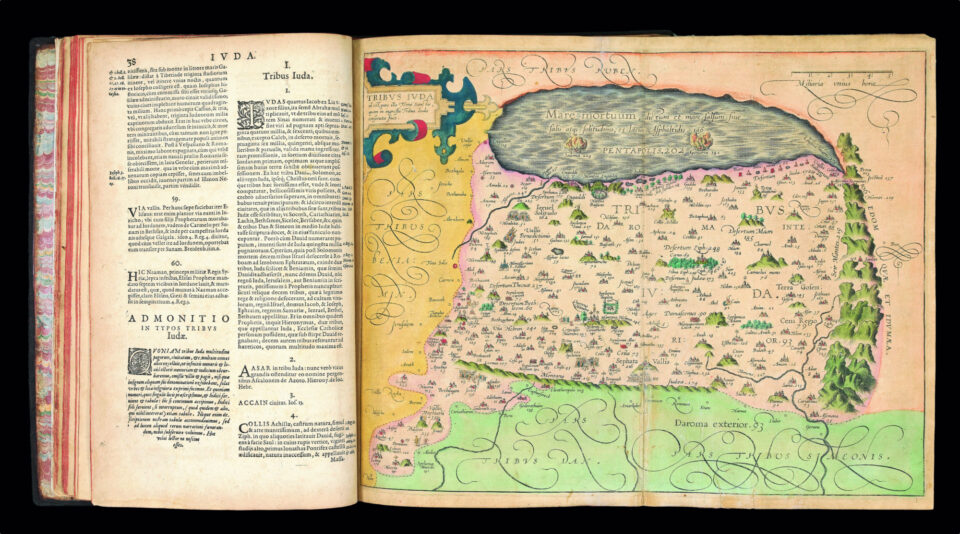 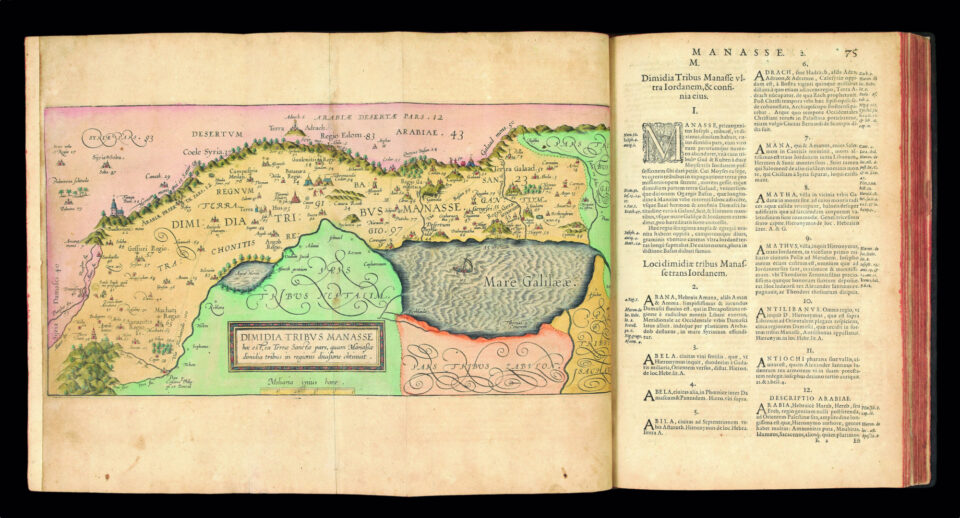 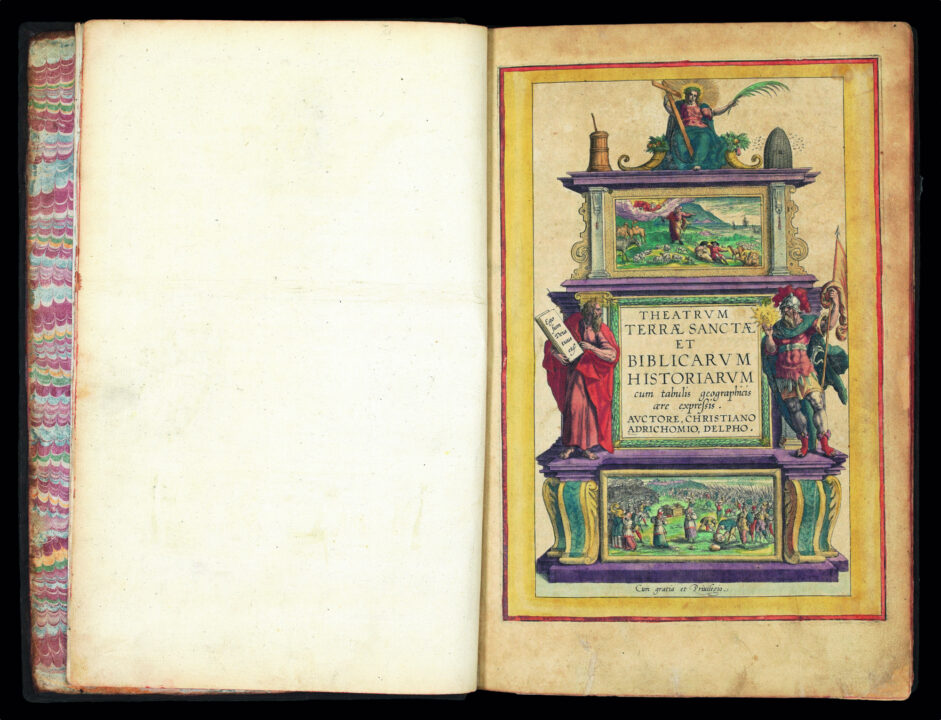 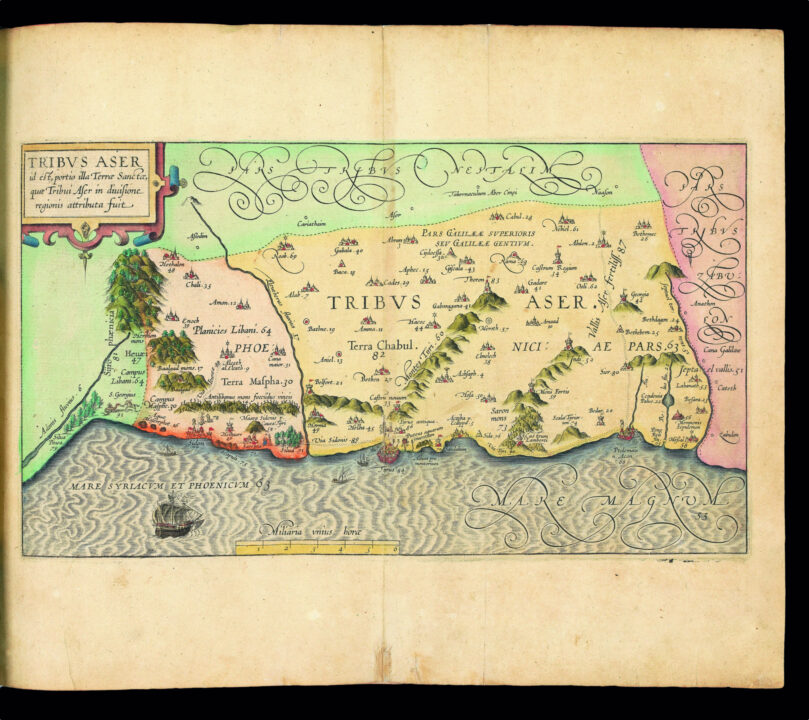 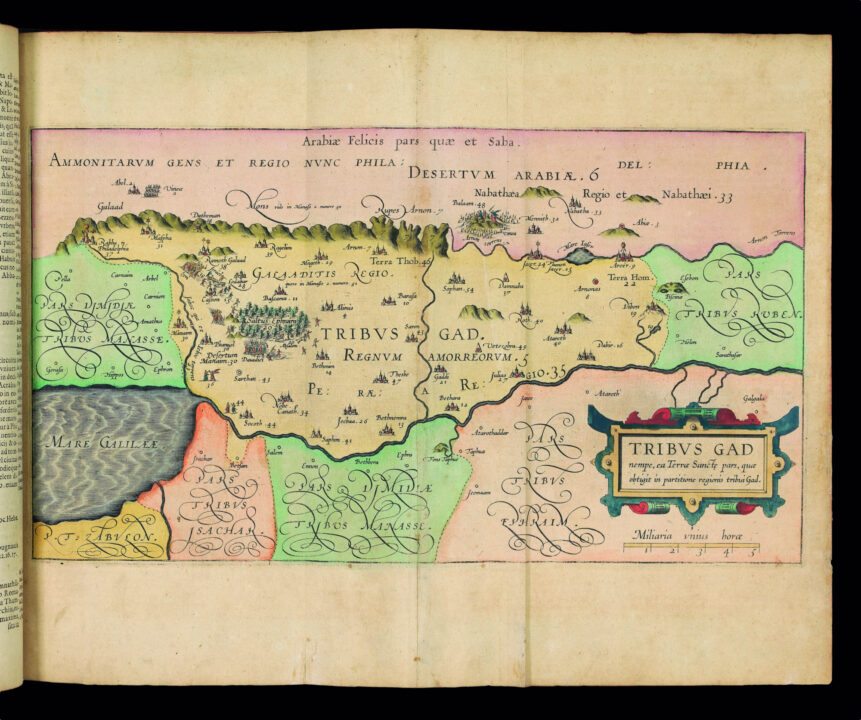 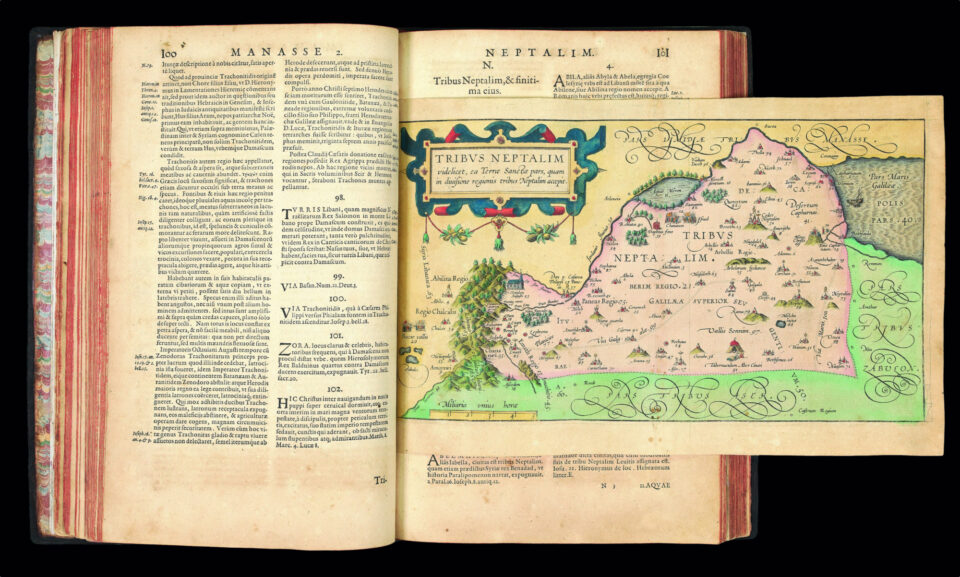 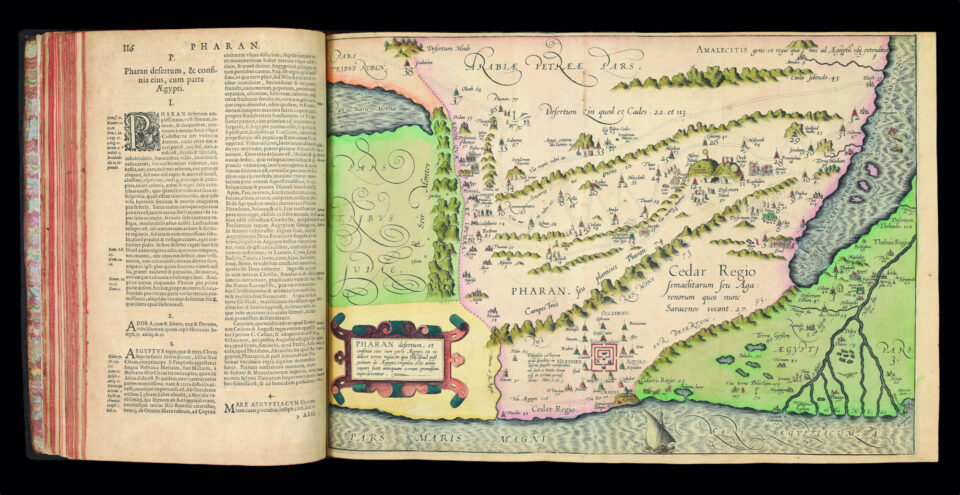 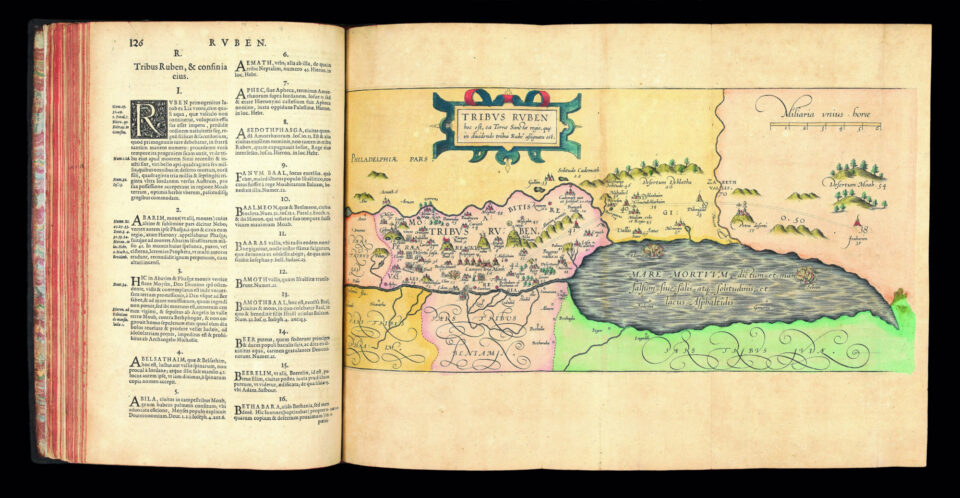 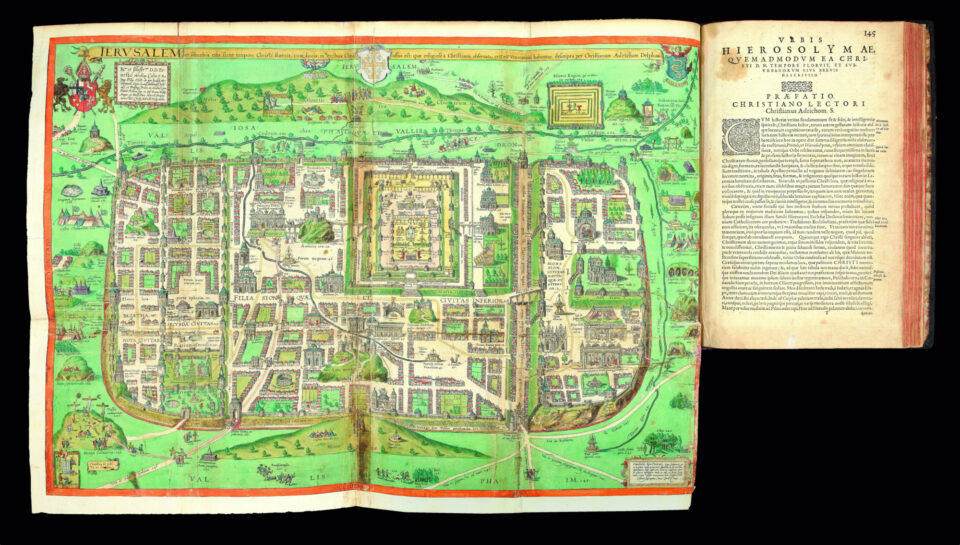