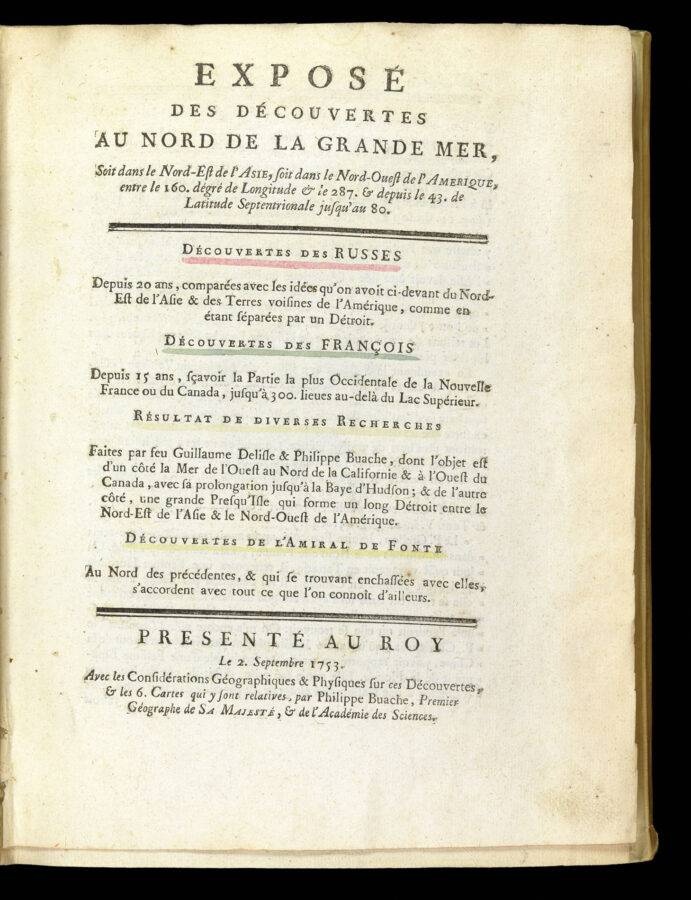 A volume containing three works concerned with the Delisle-Buache controversy over the geography of the North Pole, ​“of the greatest rarity and importance for the history of the discovery and cartography of Alaska and the Northwest coast in general” (Lada-Mocarski). The first work is ​‘Exposé des découvertes au nord de la Grande Mer’ by Philippe Buache, a short pamphlet outlining the discoveries made by the different European nations at the North Pole.

The second work is the first edition of the ​‘Considérations géographiques’, ​“the magnum opus of the Delisle-Buache theory of the layout of lands in the North Pacific Space” and the ​“first major work of North Pacific cartography” (Lada-Mocarski). It was written by Buache to support the assertions made by his uncle by marriage, Joseph-Nicolas Delisle. Delisle returned to Paris in 1747 after spending two decades at the St Petersburg Academy, bringing with him classified maps and manuscripts concerning Vitus Bering’s voyages. Delisle read a paper on Bering’s voyages to the Academy in 1750, accompanied by a manuscript map, which included a letter supposedly from the Admiral de Fonte, a Spanish explorer from the early seventeenth century, which supposedly confirmed the existence of a Northwest Passage. The maps in the ​‘Considérations géographiques’, which include maps of Japan, Siberia and Canada, are designed to support Fonte’s claims as well as show other polar discoveries. In particular, they show the mythical ​“Mer de l’Ouest” which covers most of the western United States and Canada (North America appears to be pinched in by this sea to the west and Hudson Bay to the east) and the ​“Rio los Reyes”, the river that Fonte had supposedly sailed up from the Pacific which reached up to Hudson’s Bay.

The third work is the first edition of ​‘Explication de la carte nouvelles découvertes au nord de la Mer du Sud’, written by Delisle to accompany and explain his large map, ​‘Carte des nouvelles découvertes au nord de la mer du sud’. This is the first edition, which although dated 1750 was most likely printed in 1752 at the same time as the ​‘Explication’, the date 1750 referring to the original manuscript map presented to the Academy. It includes tracks of the journeys made by the Russian explorers Bering and Aleksei Chirikov (whom Delisle accompanied on one voyage), the Spanish route between the Americas and their East Indies colonies, and the ​“Mer de l’Ouest” and ​“Rio los Reyes”.

Buache and Delisle’s works ​“launched a radically new interpretation of the geography of Western America in a hubbub of publicity and controversy” (Williams). Fonte’s supposed discoveries caused a schism in French geography: Robert de Vaugondy called it ​“une pure fiction” and engaged in a lengthy pamphlet war with Buache; others, like Jean Janvier, produced maps showing Fonte’s supposed discoveries; some, like Robert Bellin, remained neutral, choosing to continue to draw their maps with coastlines left open without coming down on either side. Within a couple of months, however, Buache and Delisle fell out, arguing over discrepancies between their maps and Fonte’s letter, and the debate raged on until further explorations put paid to Fonte’s claims.

Although there are institutional copies of all three works, it is very rare for them to appear bound together on the market; we have only been able to find an example sold at Parke-Bernet in the Frank Streeter Sale in 1969, based on the description of the lot as ​“three items”, and one offered by Peter Decker from the collection of George W. Soliday in 1945. The ​‘Exposé’ in particular does not tend to appear on the market as a separate work either; we have only traced one example, sold at Harmsworth in London in 1948.