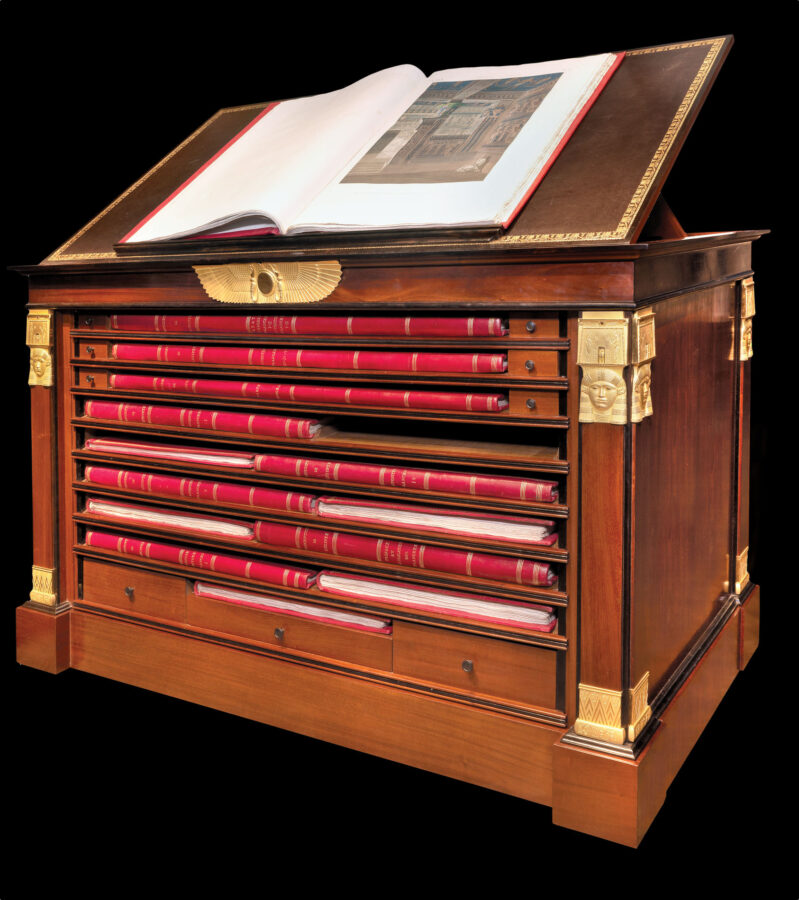 A very fine example of ​“one of the greatest achievements of French publishing” in its original binding presented to Guy de Lavau, Prefect of the Police of Paris

First edition of the first scientific description of ancient and modern Egypt; one of the most important and ambitious publication projects ever undertaken by the French state.

​“In an effort to curtail England’s influence in the East, Napoléon Bonaparte embarked on a secret mission to invade Egypt in 1798. In addition to his military goals, Napoleon used the campaign to mount the first large-scale scientific expedition related to the study of both ancient and modern Egypt. He intended to document antiquities, ethnography, architecture, and natural history, taking with him 160 artists, scientists, architects, and printers, who compiled a monumental record of the campaign. [This group of experts were known as the ​“Commission des Sciences et des Arts en Égypte”] In the end, Napoleon’s forces were defeated. In 1801, in return for transport home, the French agreed to relinquish many of their collected antiquities, including the Rosetta Stone, but not their personal notes and sketchbooks. Once home, the minister of the interior convened the community of Egyptian scholars, who selected a committee of eight to publish the findings of the expedition. The result, Le Description de l’Egypte, was begun in 1803 and took more than twenty years to produce. Including 844 large engraved plates, many in colour, it is one of the greatest achievements of French publishing” (Metropolitan Museum of Art, New York).

The first volumes of text and plates were delivered to the public in 1810 after a very long phase of amassing the texts and the capital, which was also utilised to address a number of technical problems posed by the unfamiliar formats of the paper, the use of special characters, the installation of the intaglio presses in the workshops of the Louvre, and the technical organisation of the printing entrusted to the Imperial Printers. This editorial adventure, as eventful as that of Diderot and d’Alembert’s Encyclopédie, would be completed in 1828 after four other livraisons in 1812, 1817, 1821, with the final one five years later. The book was printed in several hundred copies, cost five million francs at the time, and although it was a financial disaster, was an extraordinary technical and artistic success. Originally conceived as a formidable propaganda tool to the glory of the Emperor and his Army, the book would reveal itself particularly as the prestigious and magnificent witness to a meeting between two civilisations, ancient and modern, and two cultures, Muslim and European, of the late eighteenth century. The Description de l’Égypte is specifically the greatest monument ever raised to the glory of a civilisation:

​“the faithful and complete description of the monuments that have adorned the banks of the Nile for so many centuries and make this country the richest museum of the world” (Joseph Fourier, Préface historique).

The work is offered together with a remarkable archive of original documentation, comprising manuscripts recording appointments and honours bestowed upon Guy de Lavau, rare printed ephemera describing the collation and furniture, and manuscript documentation relating to the presentation of this particular copy.

2. Document signed by the Minister of the Interior, Comte Jacques-Joseph de Corbière, 20 December 1821. 1 p. folio. Appointment of Guy de Lavau to the rank of Prefect of the Police of Paris.

4. Document signed by the Minister of Justice (Garde des Sceaux), Comte Portalis, 10 January 1828. 1 p. 4to. Appointment of Guy de Lavau to the rank of Councillor of State (Conseiller d’État ordinaire).

Documentation relating to the presentation of this particular copy.

1. Document signed by the Minister of the Interior, Comte Jacques-Joseph de Corbière, 23 November 1826. 1 p. folio. This confirms that the Comte de Lavau is to be given a copy, and instructs him to contact the editor Edme-François Jomard:

​“by his ruling of the 12th of this month, the King has granted you a copy (on fine paper) of the Description de l’Égypte (…) you are kindly requested to follow up with Mr Jomard, Commissioner of the Government at the Palais de l’Institut“

2. Document signed by Edme-François Jomard on header of the ​“Commission of Egypt”, 28 November 1826, 2 pp. 4to. This remarkable document explains the various possible bindings for the Description de l’Égypte and gives the name of the binder (Tessier). It includes two very precious plates: the table of collation and the engraving of the piece of furniture.

​“before handing over your copy to the Commission’s binder to be bound as usual, (for discussion with him) I am honoured to inform you that the expenditures for the binding of the plates in colour paper amount to 185frs for the five publications (…) The folio text is delivered as issued (…) The half binding of the 14 volumes of plates, with morocco spine, and the covers in ​“papier maroquiné” and gilt roulette, will cost 425frs (…) As soon as we have received your response (…), I will have your copy prepared by Sr Tessier, the Commission’s binder (…)”. 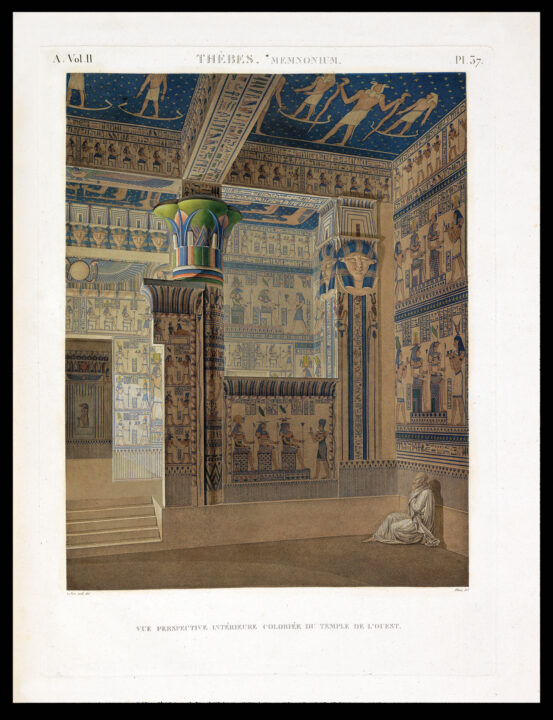 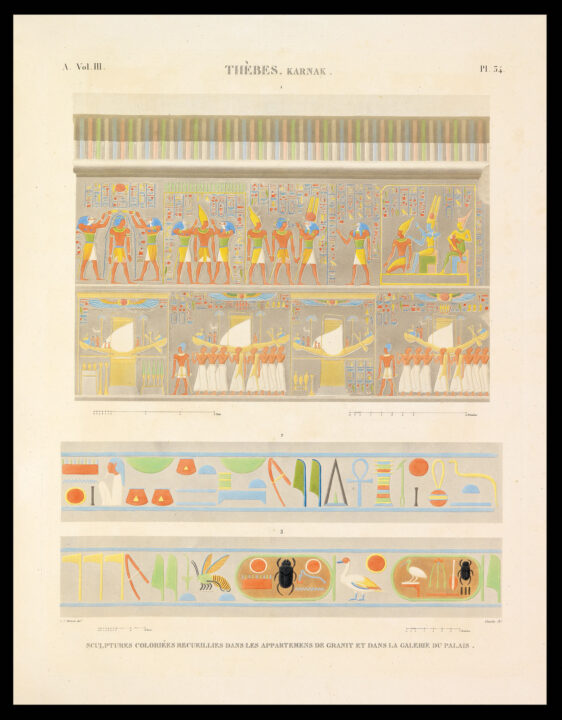 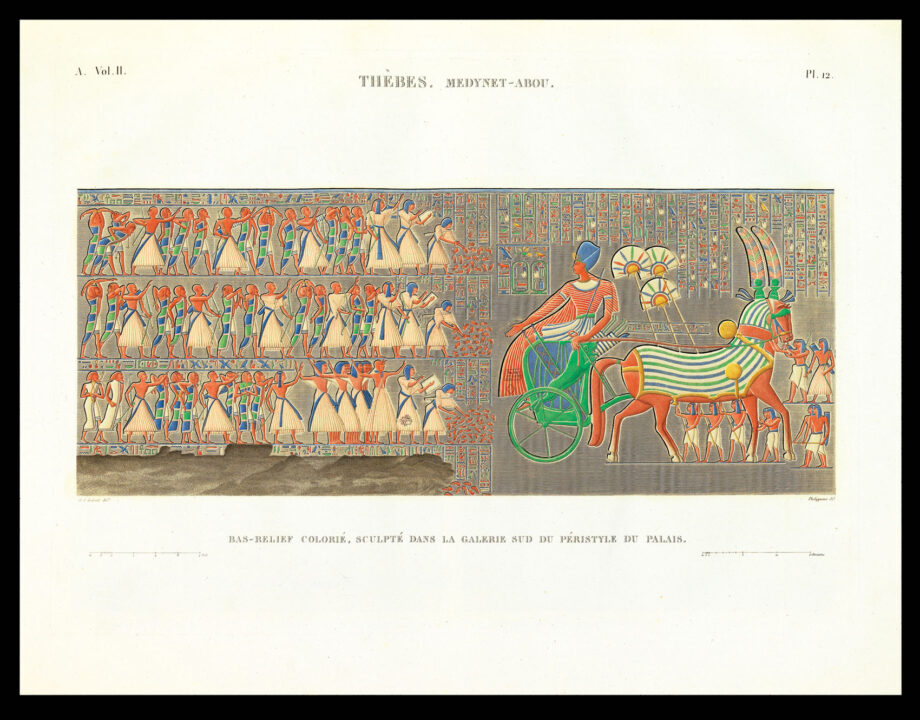