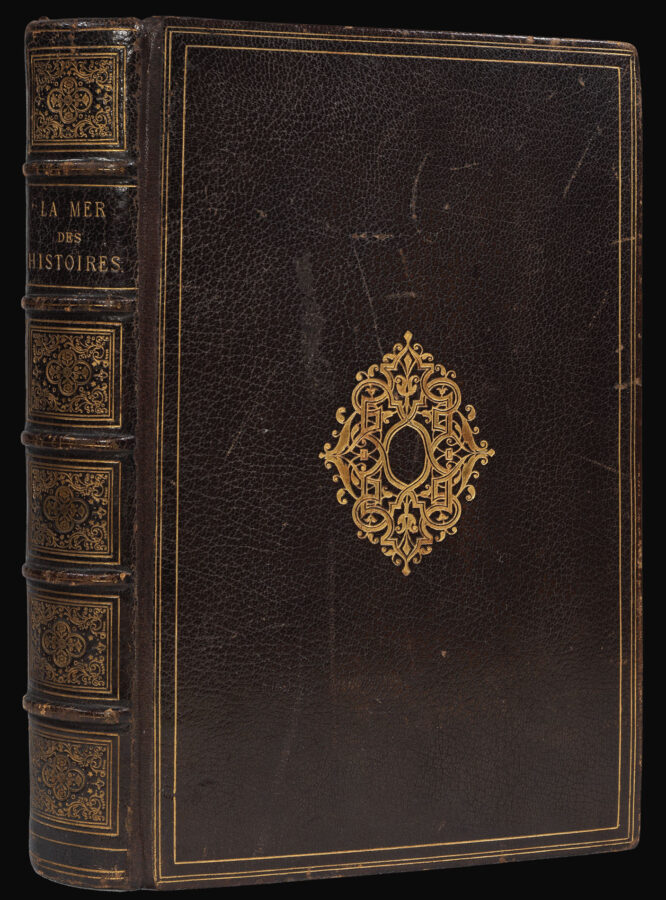 A sea of stories

A rare edition of this popular chronicle, ​‘A Sea of Stories’, first published in French in Lyon in 1491 as an adaptation of the Latin ​‘Rudimentum novitiorum’, first published at Lubeck in 1475, and is essentially an abridged history of the world. The ​‘Mer des histoires’, and its woodcut world map enjoyed great popularity in the first half of the 16th-century, and the BnF and British Library hold many examples by separate publishers from this period. This edition was published for Jean Bon Homme, sometimes Jean Bonhomme II, before October 1552, the date of his death, by the Angeliers Freres, Arnoul and Charles: and the title-pages are decorated with their distinctive architectural border incorporating the printers’ device of two tied angels. This edition was issued concurrently with, and is sometimes bound with, the Angelier or other editions of a third volume containing Jean Le Gendre, ​‘Tiers livre de la fleur et mer des hystoires…’, which continues the chronicle to 1550. Although the title states that the chronicle extends beyond 1543, it ends at 1535.

The map of the world is a slightly smaller copy of the world map that appeared in 1475 in the original ​‘Rudimentum Novitiorum. As Thomas Suarez eloquently reports in his ​‘Shedding the Veil’, item 2, page 10 onwards: the world map is geographically ​‘typical of the encyclopedic mappaemundi which often hung in medieval monasteries or palaces, this map records the three principal lands of the world — Asia, Africa, Europe — in the same tripartite skeleton as the T‑O map, but with specific countries and regions of the world recorded. Each is symbolized by a mountain, and partitioned by arbitrary waterways. The ​“T” itself of the T‑0 pattern is not drawn, and the waters it represented (Mediterranean Sea, Don and Nile Rivers) are not otherwise shown. The map itself would not contradict a flat earth if that is how its viewer chose to see it. At the top, in the farthest region of the East, we see Eden, shown as a mountain from which the four rivers of Paradise flow (the Ganges, Nile, Tigris, and Euphrates). Columbus believed he had reached the mouths of these sacred rivers at the outskirts of Paradise when entering the Gulf of Paria, on the shoulder of South America, during his third voyage.

​‘Peering out from within the walls of Eden are two clothed men, rather than the figures of Adam and Eve which one would expect on a map of this heritage. Their identification is an enigma. Each holds an olive (?) branch, symbol of peace, suggesting that the pair may represent mutual tolerance and love between supposed adversaries, Jew and Christian. If this interpretation is accurate, the map’s author was probably inspired by the 13th-century Majorcan scholar Ramon Lull, who wrote of ​‘two men of marvellous wisdom, a Jew and a Christian, [who] esteemed each other in glowing love [and, from a grove,] for a long time they disputed in friendly conversation the advent of the Messias’. Both have bare heads, however, discouraging (though not eliminating) that amiable theory. Conversely, the two might represent the allegorical source of all knowledge and rivers, the Master and his Novice.

​‘Immediately to the right (south) of Paradise lies Tabrobana (Sri Lanka), the southeastern ​‘corner’ of the earth, which would soon be expanded to accommodate the discoveries of Columbus. At the western end of the earth (bottom of the map) lie the Pillars of Hercules (Strait of Gibraltar), entrance to the western ocean. The southernmost point (i.e., 3 o’clock position) is Ophir, the Biblical place from where Solomon’s ships brought gold and other riches. Just east of Ophir is the Phoenix, a bird believed to live in Arabia which regenerated itself after its five-hundred year lifespan by setting itself aflame on a pyre. In the northeast (about 10 o’clock position) is a man who has just lost one arm to the devil.

​‘Travellers’ stories warning of devils circulated in several variations in medieval lore. Most popular were the writings, circa 1360, of Sir John Mandeville (as he was known; he was doubtfully a knight, did not travel beyond Western Europe, and may not have been English). Mandeville described a ​‘valley perilous’ in Mistorak (Armenia?) where the traveller, encountering tempests, thunder, and the sound of drums, entered a realm of devils. The story appears to have been plagiarized from Friar Odoric’s account of his journey to China earlier in the fourteenth century, in which similar impressions were described in less sensational terms. Odoric’s account was probably an honest but uncomprehending portrayal of natural phenomena: modern travellers have noted the huge (and devil-like) imposing rock figures in the highlands of Central Asia, and the apparent sound of drums which the acoustic nature of its topography seems to create. Directly to the west (below) lies a ​‘sea of the amazons’, an embodiment of an old tradition of a land in which only women dwell. Columbus would soon transplant the myth to the New World, and it would be recorded on such maps as that of Ruysch in 1507.

​‘The influence of the Crusades is found in the placement of the Holy Land at the center of the map, a common feature of post-Crusades mappaemundi, and in the figure of a king, holding a book, to the northeast of Ophir. This man is Prester John, whose mythical Christian stronghold was a brilliant hoax which became the focus of a search which helped motivate Renaissance exploration. The myth of Prester John was fabricated by the fusing of two truths. The first was that there were in fact scattered pockets of Christians living in the East, principally the Nestorian Christians, whose ancestors in the mid-5th-century had fled the persecution they faced in Europe for their ​“unorthodox” beliefs regarding the enigma of Jesus being both man and god. Secondly, there also were formidable military powers in Asia who fought successful battles against Islam, most famously the 1141 assault against Persia by a Karezym /​Kara Khitai coalition. Following the First Crusade these circumstances were transformed into the myth of Prester John, an invincible Christian ally in the lands of the ​“infidels.” Word of his kingdom was introduced into Western Europe after the First Crusade, apparently to allay its fears of engaging in further military intervention in the Levant. The lure of the tale was plain: no Christian army would be vulnerable to Islamic forces once it reached the impenetrable arm of the Kingdom. That Second Crusade proved disastrous for Europe, however, and faith in the esteemed Prester’s existence might have diminished were it not for a new and more elaborate letter circulated among the leaders of Western Europe, which this time — most assuredly! — was written by Prester John himself. It was clear to the author of this mappamundi that Prester John’s kingdom was located in Asia, for in that letter Prester John stated that: ​“our magnificence dominates the Three Indias, and extends to Farther India, where the body of St. Thomas the Apostle rests. It reaches through the desert toward the place of the rising of the sun, and continues through the valley of deserted Babylon close by the Tower of Babel.” Repeated European adventures in the East failed to locate the Kingdom, however, and as a result, as early as the 1339 chart of the Majorcan maker Dulcert, Africa became the preferred site.

​‘As late as 1507 Waldseemuller still envisioned Prester John in the East, stating in the ​‘Cosmographiae Introductio’ (the same book that coined the name America) that Prester John is the one ​‘who rules both eastern and southern India and who resides in Biberith.… That such an authority as Waldseemuller wrote with such credulity of Prester John well into the era of great discovery underscores the fact that we must not see this rude figure of a seated king as simply a medieval embellishment. Clearly, to the beholder of this map five hundred years ago, that figure represented a very real place on earth, a real but exotic world; according to Prester John himself, in his Kingdom the palace in ​‘which our sublimity dwells’ has a roof of ebony, gables of gold, gates of sardonyx inlaid with the horn of a serpent, windows of crystals, columns of ivory, and a courtyard paved in onyx. Further, ​‘our bed is of sapphire, because of its virtue of chastity. We possess the most beautiful women, but they approach us only four times in the year and then solely for the procreation of sons, and when they have been sanctified by us, as Bathsheba was by David, each returns to her place’. And as for clothing, ​“there is a kind of worm there which in our tongue are called salamanders. These worms can only live in fire, and make a skin around them as the silkworm does. This skin is carefully spun by the ladies of our palace, and from it we have cloth for our common use. When we wish to wash the garments made of this cloth, we put them into fire, and they come forth fresh and clean. Every kind of beast that is under heaven” can be found there, milk and honey abound, and ​“no poison can do harm and no noisy frog croaks” in this kingdom.

​‘Just east of Prester John is the Tree of the Sun and Moon. This oracular tree was shown to Alexander the Great while far into his conquest of the East. At dusk, the Sun Tree (which was masculine) and the Moon Tree (which was feminine) spoke to Alexander in an Indian language. He ordered the townsfolk to translate the trees’ words, but they refused, for the trees had foretold of Alexander’s death. In another version of the story, the two trees also spoke Greek, and told Alexander that he would die in May in Babylon by the hand of one of his own people, but refused to alter fate by revealing the name of the traitor.

​‘In the extreme northwest (at about the 7 o’clock position) lies the country of ​‘viland’ or ​‘vinland’. Rather than a record of pre-Columbian Norse settlement in North America, however, our viland more likely represents ​‘Finland’. Although extant textual references to Vinland date back to the eleventh century, its appearance on maps is otherwise unknown until the late 16th-century. Finland does not otherwise appear on printed maps until the Ziegler map of Scandinavia (1532), but it is found on manuscript maps antedating the ​‘Rudimentun Novitiorum’ and ​‘Mer des Hystoires’ by more than three centuries. The world map of the Arabic geographer al-Idrisi (middle of the twelfth century) shows Finland near Russia and describes it as a most cold region having snowfalls of long duration — clearly Finland rather than our American Vinland. The Hereford mappamundi of circa 1290, to whose non-Ptolemaic geographic tradition the present map belongs, shows a group of three Baltic countries lying north of a bear representing Russia, of which the middle one is Finland, spelled the same as in the present map (viland). Our Vinland is almost certainly the child of these medieval Baltic traditions, not of pre-Columbian American landfalls’.

In contrast to the world map, the map of Palestine admits an entirely ​‘observed’ view by presenting the Holy Land from a bird’s-eye perspective. In doing so, it may be said to be the first modern printed map. It is oriented with east at the top and extends from Damascas and Sion in the north to the Red Sea in the south. Jerusalem is shown as a walled city at the centre of the map, with Calvary nearby. Eight heads around the periphery represent the winds or compass directions. As with the world map, each town or country is represented as a hillock bounded by either walls or waterways. Nebenzahl suggests the map originates from an account of the Holy Land by Burchardus de Monte Sion from Magdeburg, who spent ten years there in the thirteenth century. 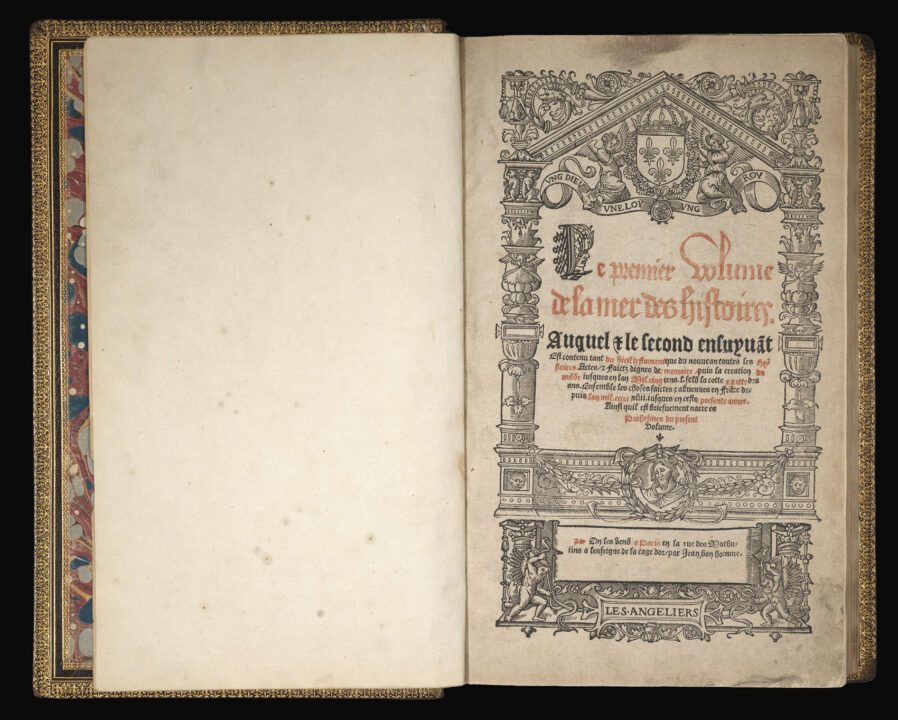 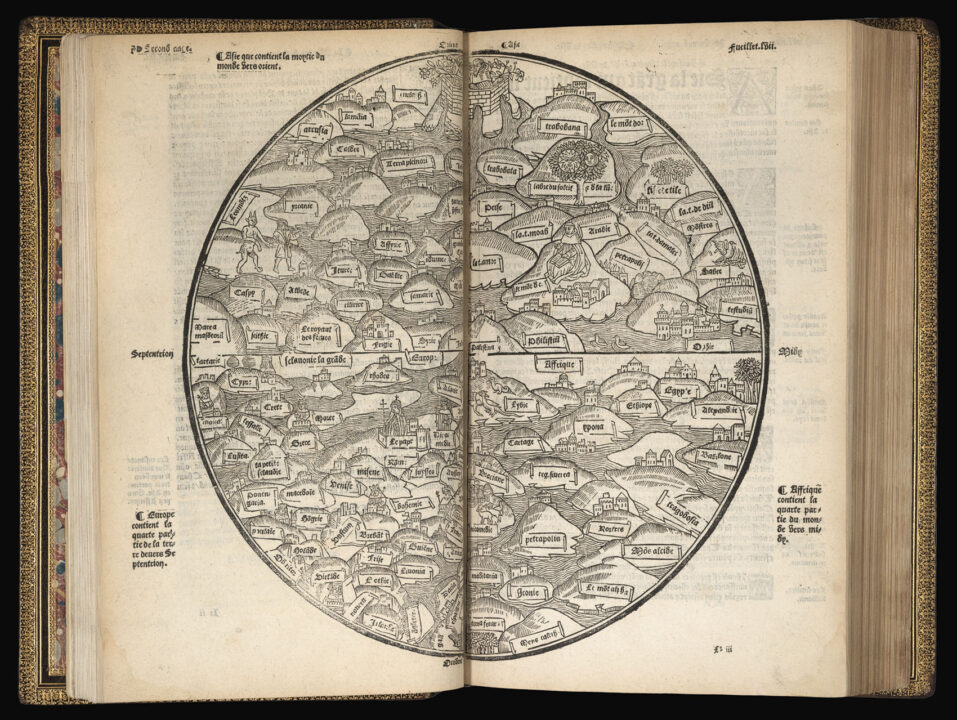 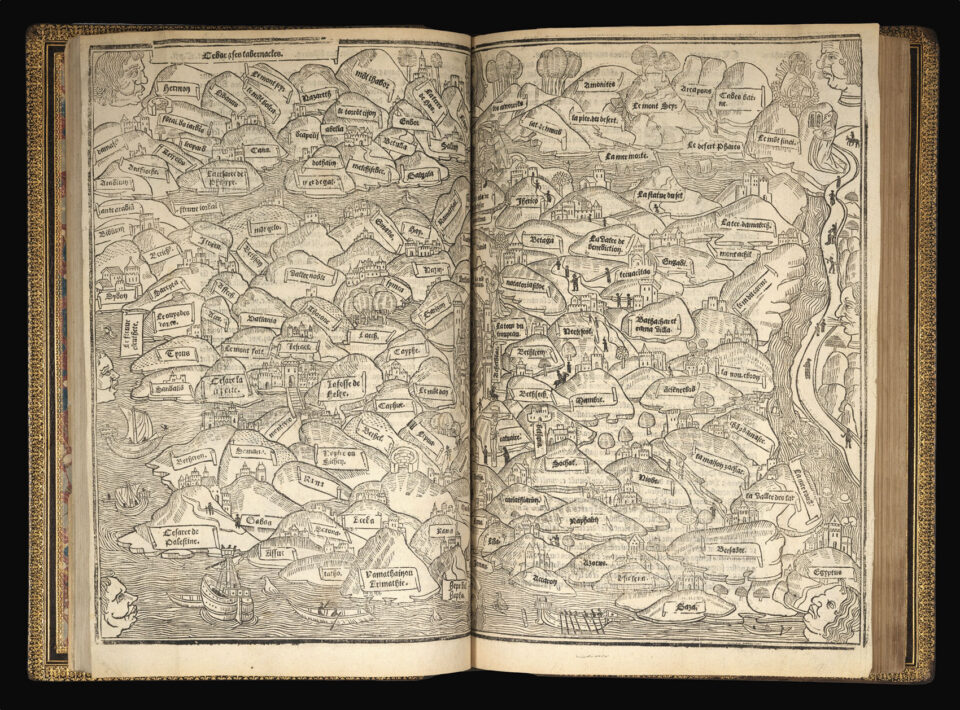 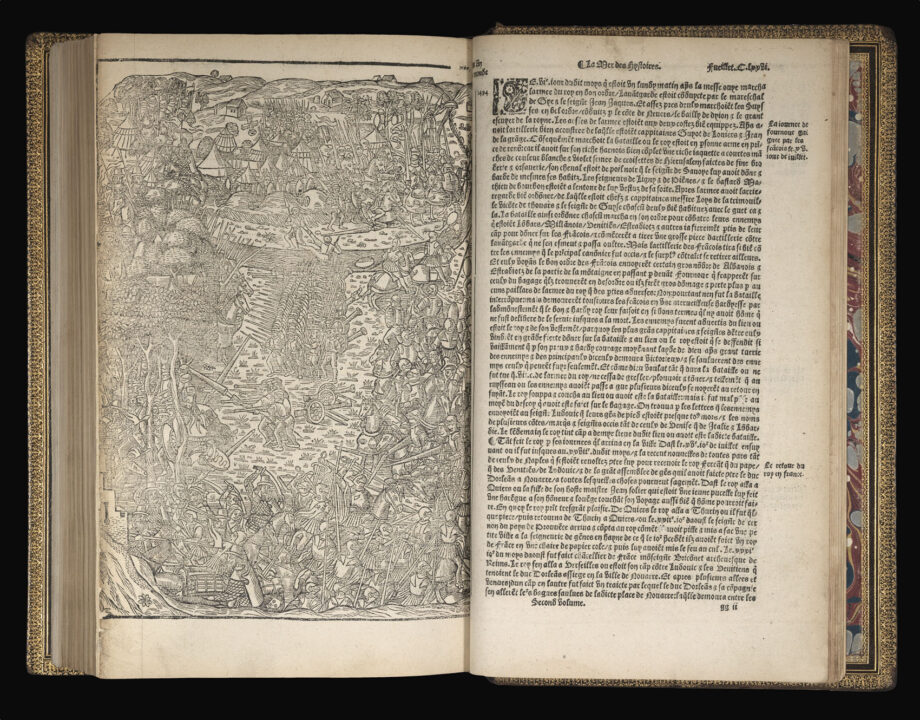