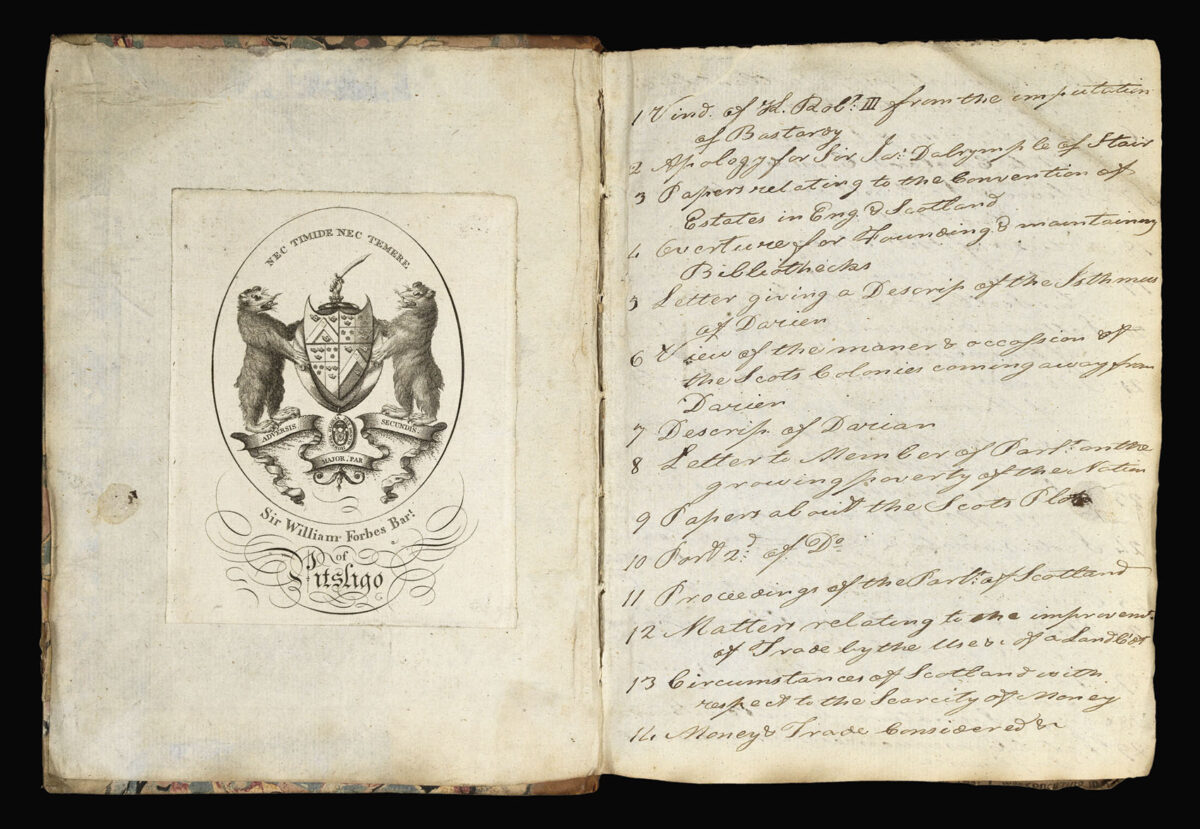 [Collection of 28 pamphlets relating to Scotland, in particular the Scottish economy, the Darien Scheme, and the 1707 Union between England and Scotland]

A fascinating collection of pamphlets dealing with a crucial period in Scottish history, including a pamphlet with a scarce map of the Darien Colony and a work on the legitimacy of the Scottish kings which does not appear in ESTC.

The publication dates range from the late seventeenth to mid eighteenth century. They are all of Scottish interest, and fall into several categories: the Darien Scheme, the 1707 Union between England and Scotland, ecclesiastical and political controversies, and the Scottish economy.

The collection contains the first comprehensive eyewitness account of the Scottish colony at Darien, ​‘A Letter, giving a Description of the Isthmus of Darien’, which includes a rare folding map of the colony, with ​‘New Edinburgh’ marked by a Scottish flag, of which we could trace only four institutional copies. The letter portrays Darien and the natives very favourably, in what appears to be a last-minute attempt to attract more support. The map is dedicated to John Hay, 1st Marquess of Tweeddale, even though he had been dismissed as Chancellor for supporting the Darien scheme. An opposing view is offered by ​‘A Description of the Province and Bay of Darian’, a more sensational account of the Darien natives’ devil worship and bloodthirstiness in battle. A discussion of the reasons for the failure of the scheme is provided by ​‘A Short and Impartial View… of the Scots Colony’s coming away from Darien’, which blames a lack of English support and longstanding restrictions on Scottish trade for the failure of the scheme. The fallout of the ill-fated venture is demonstrated by ​‘A State of Mr Paterson’s Claim upon the Equivalent’, an account of William Paterson’s ongoing attempt to recover money from the Equivalent Fund of the Darien scheme to cover his losses from his support.

The collapse of the Darien Scheme had a significant effect on the Scottish economy, which was already unstable. The protectionist pamphlet ​‘A Letter… Occasioned, by the Growing Poverty of the Nation’ calls for a standing council of trade and a return to domestic products and industries. The collection includes John Law’s ​‘Money and Trade’, which pushes for a paper currency backed by land. This would prove to be an important factor in the debate over Union. Sir John Clerk’s ​‘The Circumstances of Scotland Consider’d’ implies that while Scotland’s wealth failed to grow at the same rate as its neighbours, ​“airy schemes of governement [independence]” were not worth defending. The history of Scottish banking is represented by a copy of the 1695 Act of Parliament establishing the Bank of Scotland to support Scottish business, and ​‘Copy of a Signature for a New Bank’, the 1727 charter founding its competition, the Royal Bank of Scotland, who in that year became the first bank to offer an overdraft.

The prospect of a political Union between England and Scotland to consolidate the Union of the Crowns in 1603 initiated stormy debate. George Ridpath’s ​‘Reducing of Scotland by Arms’ aimed to whip up Scottish opposition by discussion of the (highly unlikely) possibility of England achieving the Union by force. The reply is also present, written by William Atwood, which was such a chauvinistic defence of English imperial power that it was burnt in Edinburgh by the hangman. Daniel Defoe’s pro-Union pamphlet, ​‘The Advantages of Scotland by an Incorporate Union with England’, urges the Scots to recognise the potential benefits of trade through a Union, particularly in the Baltic. ​‘A Letter… giving an account of how the Treaty of Union has been received here’ argues along similar lines for the improvement that Union would bring, particularly given Scotland’s pre-Union poverty, and denies that it would represent any loss of sovereignty. The opposition is represented by ​‘Lord Belhaven’s Memorable Speeches in the Last Parliament of Scotland’ containing an impassioned plea from Belhaven to repel the threats posed by Union to the independence of the Scottish government, church and military. A negative English view comes from ​‘Vulpone’, an attack on Lord Godolphin’s handling of the Union process, and in particular highlighting the apparent danger of incorporating Scottish politicians, who were seen as having sold out their country, into the English system. There is a copy of the articles of the Act of Union itself, published in 1707. ​‘An Answer to the Brief Account of the Elections in the North of Britain’ refutes the allegation that the Squadrone Volante, a group of unaffiliated Scottish politicians who lent their support to the Union, were unwilling participants, and focuses ire instead on the Privy Council of Scotland. The lack of public support for the Union and the revelations concerning the financial and political deals made to ensure its passage caused instant regret in some circles. The pamphlet ​‘Reasons for Dissolving the Treaty’ shows that only six years later the case was being made for the end of the Union.

This section contains a very rare pamphlet with only three institutional copies, on the ​‘Scot’s Plot’, a plan for a potential armed invasion of England by the deposed James II facilitated and, bizarrely, then exposed by Simon Frazer, Lord Lovat.

The collection provides an excellent insight into the polemics of pamphlet wars. ​‘The Fatal Consequences of Ministerial Influences’ is a scathing account of the corruption of Walpole’s ministry (although its author, James Erskine, is best known for holding his wife Rachel prisoner for 13 years). A political controversy that seems obscure at first is represented by ​‘A Vindication of Robert III King of Scotland, from the imputations of Bastardy’, unrecorded in ESTC, an attempt to establish the legitimacy of a fourteenth century king of Scotland. It is, however, a rejection of the Whig interpretation that Parliament could legitimise royal succession in relation to Mary and William’s seizure of the English throne. An extraordinary pamphlet by James Dalrymple defending himself from allegations, amongst other things, that his daughter stabbed her husband on their wedding night and that Dalrymple’s legal judgements were boring, is of particular interest.

The Scottish Church’s reputation for persecuting Dissenters is repudiated by Defoe in ​‘The Scot’s narrative examin’d’ and in a discussion of the case of Reverend Greenfield, who was prosecuted for holding services using the English liturgy in Scotland. The ongoing debate between two factions as to the best way to govern the Church of Scotland — Episcopal (through bishops) or Presbyterian (through a committee of elders of the congregation) — is shown in ​‘Proceedings of the Parliament of Scotland’ from 1703, where a proposed toleration act was lobbied against by the Church.

The collection is brought to a pleasing end by the inclusion of James Kirkwood’s impassioned work, ​‘An Overture for Founding & Maintaining of Bibliothecks’, which called for a library in every parish in Scotland and is considered to be the foundation of Scotland’s public library system.

Sir Willam Forbes, 6th Baronet (1739–1806), a Scottish banker and benefactor. He was a keen bibliophile and was a friend of James Boswell and Samuel Johnson. He acquired a number of miscellanies and volumes of tracts for his library.