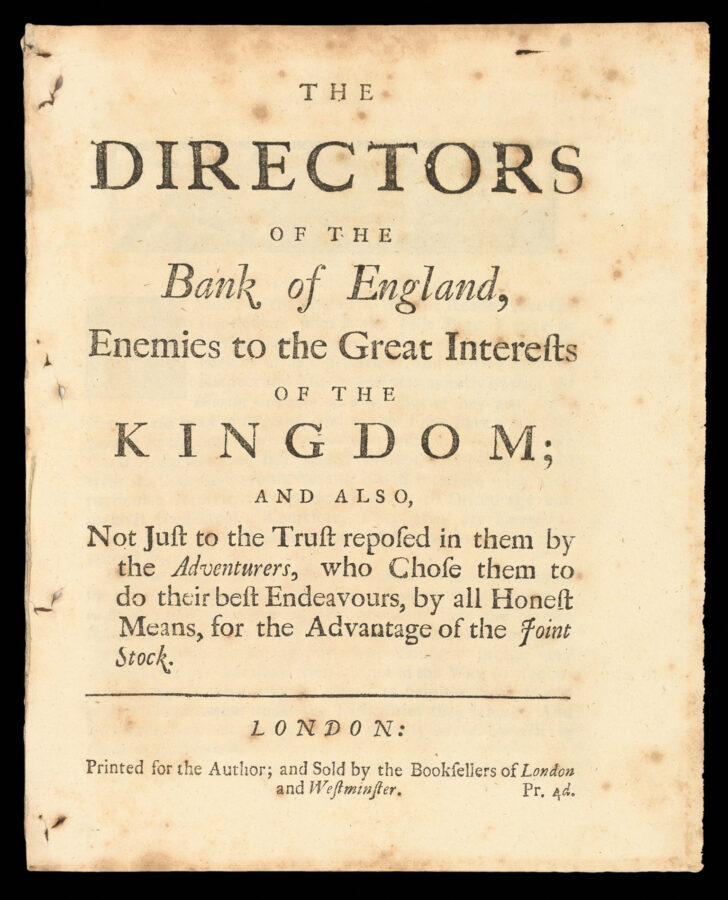 The Directors of the Bank of England Enemies to the Great Interests of the Kingdom; and Also, Not Just to the Trust reposed in them by the Adventures, who Chose them to do their best Endeavours, by all Honest Means, for the Joint Stock.

A petitionary pamphlet by John Holland attacking the directors of the Bank of England for risky attempts to relieve the national debt and proposing an alternative method. John Holland (d. 1722) was a founder and the first governor of the Bank of Scotland, whose ​“prudence and sagacity, seconded by considerable literary power” (DNB) ​“carried the bank successfully” through a major series of difficulties in its early years. In April 1715, Holland published the pamphlet, THE RUINE OF THE BANK OF ENGLAND…, in protest of the South Seas Company scheme, which he accurately predicted would become a bubble and burst with disastrous results. He followed that pamphlet two months later with the present one, criticizing the government’s current means of borrowing from the public through exchequer notes and discount bills, and introducing a plan to lend the government money only on land security at a low rate of interest. The document prints three letters written by Holland to the governor and directors of the Bank of England in May. In his introductory paragraphs (p.4) Holland issues a scathing indictment of a society run on speculation:

​“Until of late Years Merchandizing was the Common and Laudable way by which Men arriv’d to be Considerable and Eminent in this great City; but now, if a Computation be made of those who have raised themselves, for these twenty Years last past, by Merchandize, and those who have attain’d to much greater Estates by adding in the Funds, it is very visible that the First will bear but little Proportion to the Number of the Latter; and the very Men who were bred up Merchants, and were considerable in that Profession, have neglected, and almost left off the Foreign Trade, and fallen into this New, and much more Profitable way of Dealing. How far this is to be Encouraged, that a few particular Men should still go on to grow so very rich at the Cost and Expence of all the People of the Nation; or suck the Blood of the People… deserves the notice of all Men, who love the Publick.…“

This copy of the pamphlet was discovered in a bound volume of British petitions to Parliament published during the mid-1710s, an era of major change in British government that witnessed a sharp rise in the publication of lobbying literature circulated outside the halls of Parliament. ESTC lists copies at five locations in the United Kingdom and six in the United States.