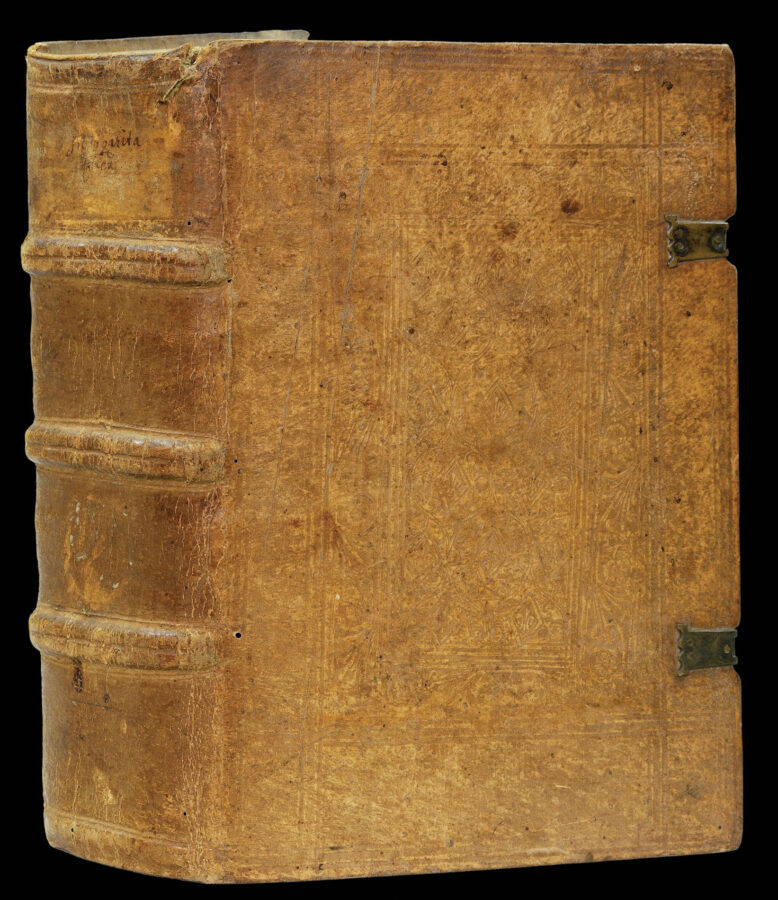 “… the first hint of Columbus’s discoveries on a printed world map.”

A fine example of ​‘Marguarita philosophica’, written by Gregor Reisch, tutor at Freiburg to Martin Waldseemüller.

Gregor Reisch (1467–1525) was a German scholar and cleric. He entered the Carthusian order in 1496 and quickly rose through the ranks, becoming Prior six years later, then confessor to the Holy Roman Emperor, Maximilian I, in 1509. In the same year, he oversaw the compilation and printing of the ​‘Rules of the Order’. The ​‘Marguarita philosophica’ was the product of seven years work before he joined the Carthusians, for at least some of which he was probably acting as a tutor to Franciscus Wolfgang, Duke of Zollern and Waldburg, whom he may have had in mind while preparing his educational tome.

The ​‘Marguarita philosophica’, or ​‘Pearl of Wisdom’, was one of the earliest encyclopaedias, bringing together in one volume all the essential information required to be an educated man at the beginning of the sixteenth century.The text takes the form of a dialogue between a student and master and is divided into 12 chapters, each one focusing on a different aspect of Renaissance learning: Latin grammar, dialectics, rhetoric, arithmetic, music, geometry, astronomy, physics, natural science, physiology, psychology, and ethics. The finely wrought title-page is replete with Christian and classical illusions. Across the top are depictions of the four doctors of the Catholic Church: St Augustine, St Gregory the Great, St Jerome, and St Ambrose. Below, within a circular frame containing the work’s chapter headings is a large triple-headed winged angel holding a staff in her left hand (power) and a book in the right (learning). At her feet are personifications of the seven liberal arts: the trivium of logic, rhetoric, and grammar, and the quadrivium of arithmetic, music, geometry, and astronomy. Aristotle and Seneca are depicted in the lower left and right corners respectively.

Throughout the work are a series of fine woodcuts, many of which were done by Alban Graf. Graf ​‘s education at the University of Basel meant that he could both read the text he was illustrating and also discuss with Reisch the complexities of the concepts he was trying to convey, with informative and beautiful results. One of the plates that illustrates the astronomy chapter shows a geocentric solar system, with man firmly at the centre. However, the most important woodcut is the world map, as on it ​“we find the first hint of Columbus’s discoveries on a printed world map. Though Ptolemaic in its geographical content, this map contains a legend which alludes to the discovery of the New World [or, at least, an awareness of the voyage of Vasco de Gama]. That legend appears on the Ptolemaic land bridge connecting Southeast Asia to Africa. It states, in Latin, that ​“here there is not land but sea, in which there are such islands not known to Ptolemy”” (Suarez, Shedding the Veil). It is also the first map to show lines of both latitude and longitude. The world is surrounded by twelve windheads with Vulturnus, the eastern wind, sporting a fine pair of spectacles – one of the earliest depictions of correcting lenses, and certainly the first for a windhead.