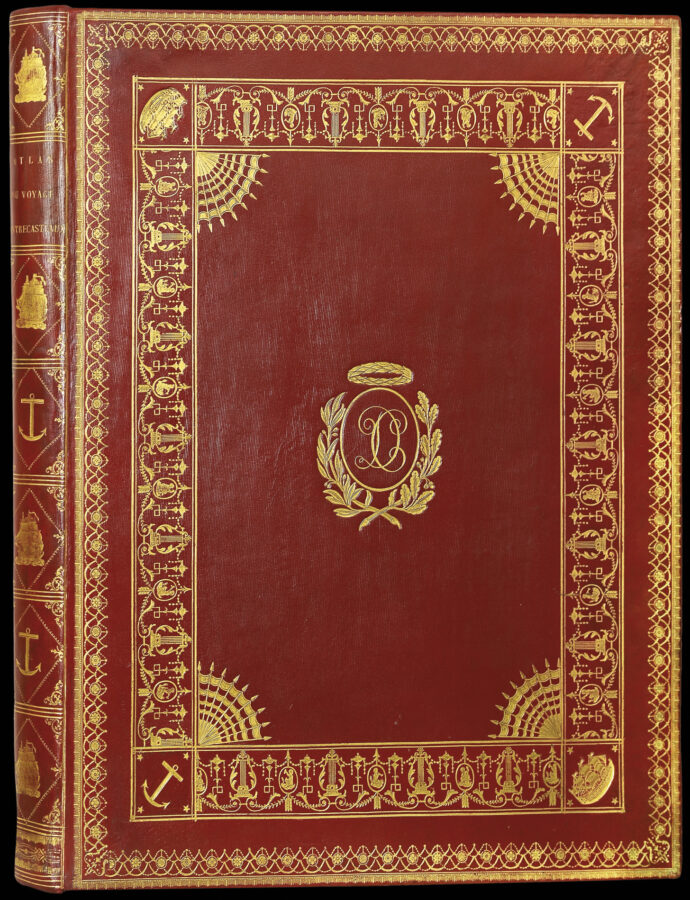 The copy of Vice Admiral Denis Decrès, Minister of the French navy under Napoleon Bonaparte, in full original colour of this classic of the mapping of Australia, with maps by Beautemps-Beaupre, the father of modern hydrography.

From 29 September 1791 to 27 October 27 1793, Charles-François Beautemps-Beaupré (1766–1854) set sail on the frigate La Recherche. Led by Antoine Bruny d’Entrecasteaux. The expedition’s primary objective was to find Lapérouse by following his route to New Holland (Australia). The expedition took three years, much shorter than it had taken Cook and Lapérouse to travel the same distance (Lapérouse’s expeditions were projected to last four years, from 1785 to 1789). However, this would be a more arduous expedition, amplified by the secondary objective of mapping every contour of the continent called, ​“New Holland,” which, in 1824, became known as ​“Australia.”

​“That will be the final destination of Sieur d’Entrecasteaux’s expedition in search of Lapérouse’s frigates. However, if these ships have indeed been swallowed by the sea, if the ocean has left no debris on any beaches, if after exhausting every possible avenue Sieur d’Entrecasteaux has no choice but to abandon this goal, as critical as it is, he shall at least have the satisfaction and glory of having made an immeasurable contribution to the perfecting of the field of cartography and the expansion of man’s knowledge. Sieur d’Entrecasteaux shall draw precise maps of every coastline and isle he encounters. If these places have already been explored, he shall verify the accuracy of his predecessors’ maps and descriptions.” (Fleurieu, Mémoire du Roi pour servir d’instruction au sieur d’Entrecasteaux, September 16, 1791).

The ships eventually came within reach of Vanikoro (the Salomon Islands), where shipwrecked survivors from La Boussole and L’Astrolabe were still living. D’Entrecasteaux died of scurvy off the coast of Java on July 20, 1793.

After spending two years perfecting his art during every day of the voyage, Beautemps-Beaupré became the premier specialist of modern hydrography. In his work he skilfully combined the art of drawing with the precision of science. It was the first time that an expedition employed a full-time hydrographer. By and large, the task of surveying coastlines and sea bottoms had previously been entrusted to naval officers, for whom it was but one of many tasks. D’Entrecasteaux quickly realized the unique chance his expedition had of having such a talented specialist aboard. The more the search for Lapérouse seemed hopeless, the more Beautemps-Beaupré had time to fulfill his scientific and artistic mission. In 25 months, Beautemps-Beaupré drew 32 maps, at a monthly rate vastly greater than any other expedition of his time.

Denis Decrès (1761–1820) was an officer in the French Navy who took part in numerous attacks against the English in the Antilles during the War of Independance, the Indies and Ireland. In 1793 he became Ship-of-the-Line Captain, then Chef de Division in March 1797 and Counter Admiral in April 1798, and was chosen by Bonaparte to command Brueys’s frigates in his Egyptian expedition. He took part in the Battle of the Nile, from whence he sailed to Malta with Villeneuve. After conducting a siege against the English navy led by Horatio Nelson, he was taken prisoner. He was freed after a prisoner exchange in August 1800, and on 2 October 1801 the First Consul promoted him to Minister of the Navy, replacing the engineer Pierre Alexandre Forfait. He was made Vice Admiral on May 30, 1804, and Duke in April 1813, and remained Minister of the Navy until 1814. He returned to the rank of Minister of the Navy during Napoleon’s Hundred Days (from March 20 to June 22, 1815). Despite being granted a fleet that was too weak for the missions assigned to him, but he nevertheless succeeded in aiding Napoleon’s rebuilding of the French Navy, both before and after Trafalgar. Decrès died from injuries caused by a bomb planted under his bed by his maître d’hôtel in 1820. The maître d’hôtel, and probable lover, was so shocked by either his own actions, or his master’s survival, or perhaps both, that he defenestrated himself shortly after commiting the act, and died some days before the Vice Admiral.

Immediately after engraving his maps, Beautemps-Beaupré sent the majority of them to Decrès. Although the expedition was carried out in 1793, the book was not published until 1808, which may well explain why the present atlas survived in Decrès’ library without text. The maps were engraved in Paris, based on the drawings made at sea 15 years earlier, and then sent directly by Decrès to Napoléon (hence their lavish beauty). Decrès would then pass the Emperor’s instructions on to Beautemps-Beaupré. Relations between the Minister and the hydrographical engineer were almost friendly, and Decrès displayed obvious, even tender, cordiality toward Beautemps-Beaupré:

​“I am very satisfied with your zeal, your application and your talents, as well as their results in this important mission that has been bestowed upon you” (from a letter dated August 14, 1806).

When he finally retired to his lands in the Haute-Marne, the former Minister recalled about his collaborator:

​“Everyone appreciates the great services M. Beautemps-Beaupré has provided with a zeal, a perseverance and a talent that exceed even his praise. In light of this, nothing that interests him needs recommendation, he deserves only justice. However, I nurtured him for sixteen or eighteen years through steady relations, and have grown very attached to him, and even owe him recognition for the proofs of friendship I have received from him over the years.“

While engraving the maps from the Voyage de d’Entrecasteaux, Beautemps-Beaupré simultaneously worked on the battle maps for Napoleon’s military campaigns. Decrès entrusted the cartographer with highly confidential missions, preferring to bypass local military officials in order to keep classified information secret. He wrote to Beautemps-Beaupré instructing him how to write in code so as to conceal information:

The goal here was obviously to make enemy ships sink in the event that foreign spies intercepted their communications. During these campaigns Beautemps-Beaupré often worked on the ground, in full sight of the enemy:

​“The presence of armed English ships prevented me from completing my reconnaissance of the Jahde and the Weser’s entries.”

Decrès, who was aware that he would be unable to find a cartographer as qualified as Beautemps-Beaupré, requested that he not risk exposure.

Voyage de D’Entrecasteaux was published in 1808 by the Imprimerie Impériale under Decrès’s patronage. The present example is, therefore, more or less the dedication copy as the title indicates the book was made ​“under the Ministry of His Excellence, Vice Admiral Decrès.” We are not aware of another contemporary coloured example of this work. Further, the exceptional colour present here is of the finest quality such as was usually deployed in Napoleon’s personal copies, as one can see, for example, on the maps of the Adriatic and Baltic seas, made by Beautemps-Beaupré for the Emperor himself in 1806, which today are found in the French National Archives [MAP. 6 JJ/​54/​ter/​A/​6]. 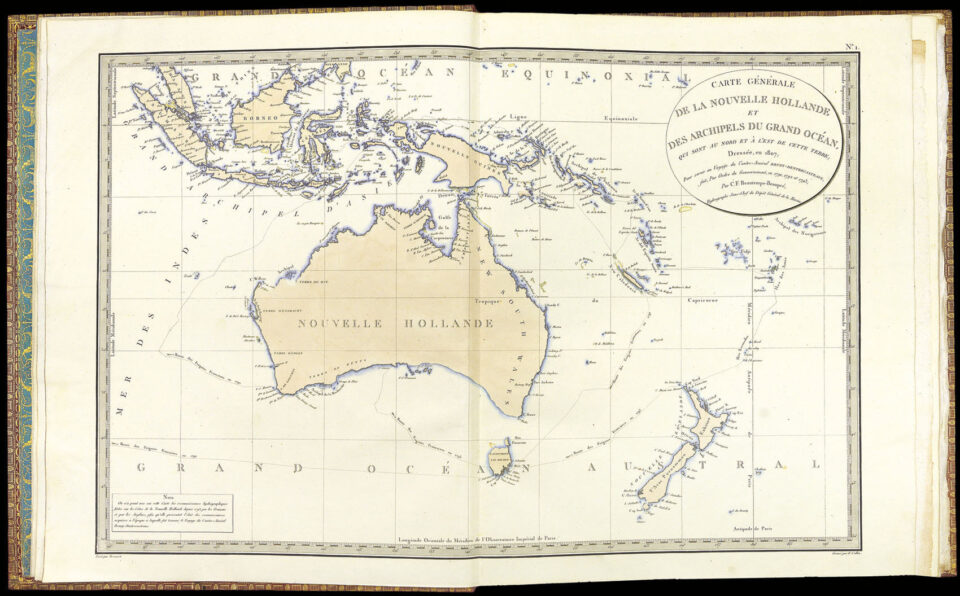 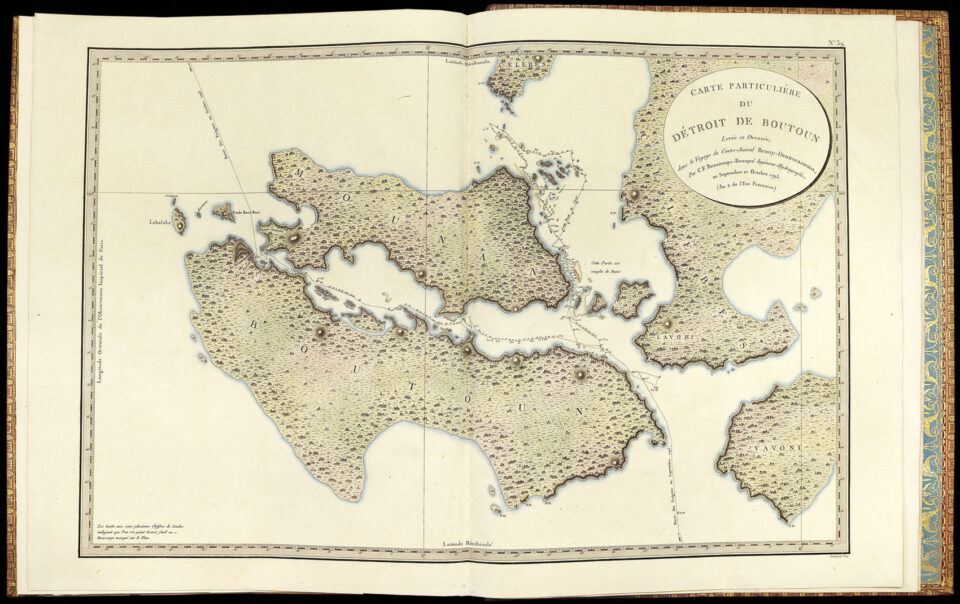 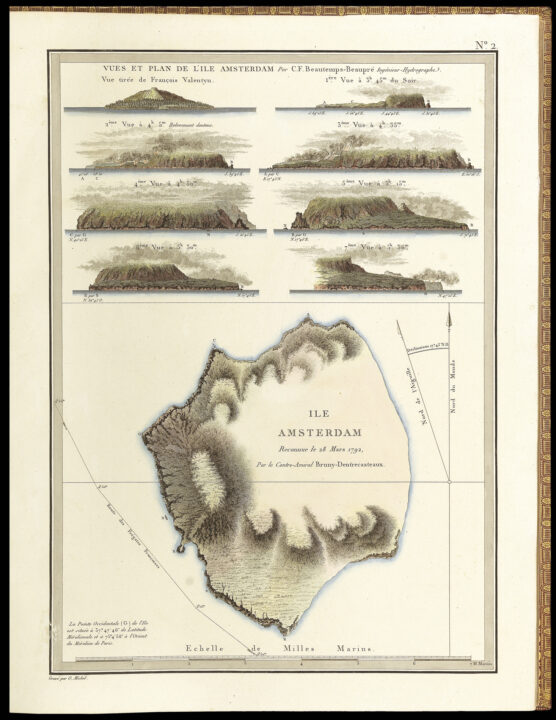 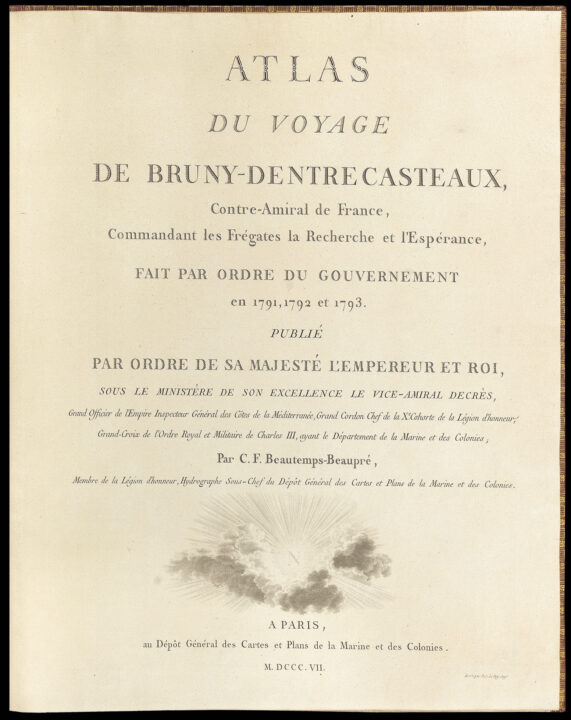