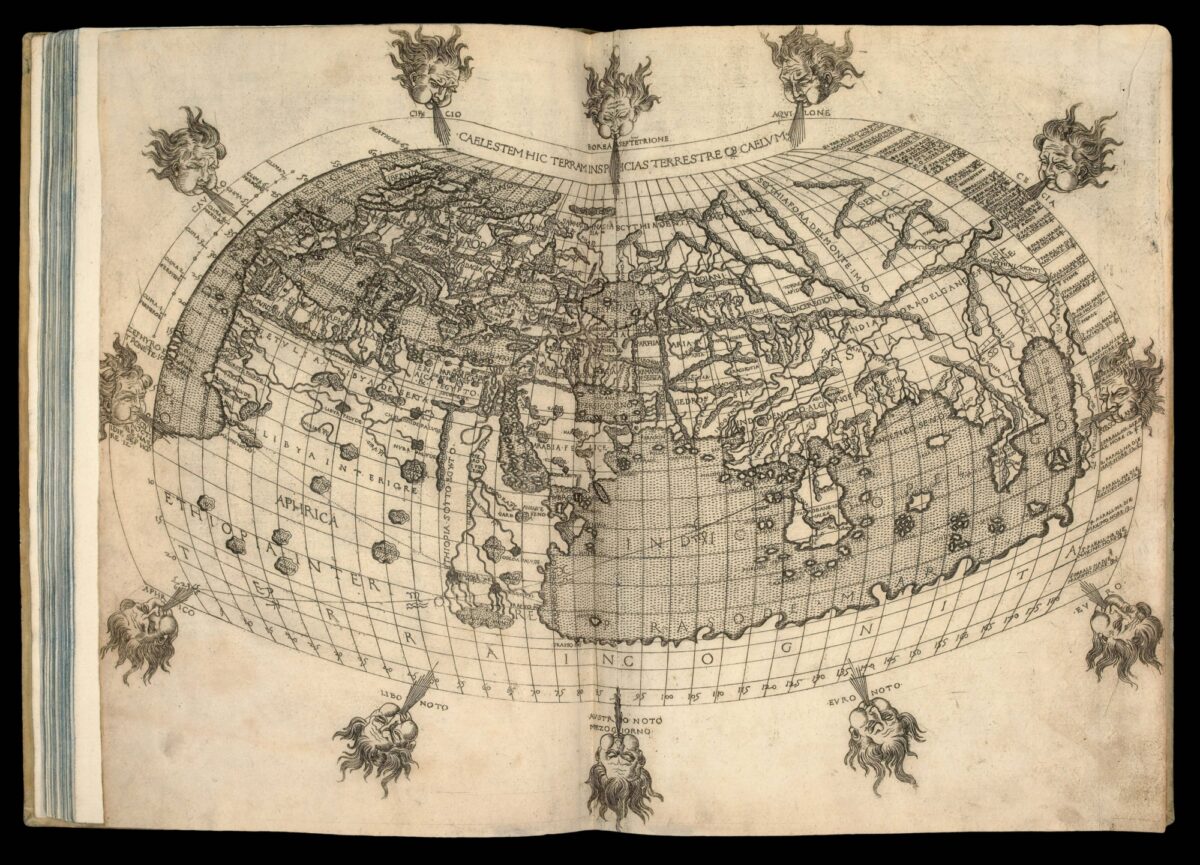 The third printed atlas, and the first in Italian

The third printed atlas, and the first in Italian, with Berlinghieri’s text.

The so-called ​“modern maps” of Spain, France, Italy and Palestine, all of which appear for the first time as copper-engravings, just preceding the woodcut maps of the Ulm edition of the same year, are of particular importance in Berlinghieri’s edition of Ptolemy.
Berlinghieri’s text is a terza rima adaption of Ptolemy’s ​‘Cosmographia’, augmented by contemporary writers. Although not considered to be an edition of Ptolemy, these are the only examples of Ptolemy’s maps printed on the original Ptolemaic projection of equidistant parallels and meridians, and the first to provide gazetteers for the individual maps. The title-page is printed in red, indicating that the copy is, like most surviving copies of this work, a third issue.

​“The identity of the engraver of the maps remains uncertain but it is believed by some to be Francesco Rosselli, who was one of the earliest known map-sellers and was active in Florence up to his death in 1513. It is also said that these maps were sometimes sold separately, or in sets without text. I’ve hardly ever come across single examples and only once a set” (Wardington Catalogue).

The text of Ptolemy in Greek is in eight books, and these were translated into Latin between 1406 and 1409 by Jacopo Angeli da Scarperia ( Jacobus Angelus), a translation extant in a number of manuscripts and printed at Vicenza in 1475. Berlinghieri’s rifacimento is in seven books. Book I in 28 chapters, Books II and III (21 and 30 chapters) cover Europe, Book IV (16 chapters) deals with Africa, Books V and VI (22 and 11 chapters) with Asia, and Book VII (ten chapters) deals with India and has an epilogue. It is not by any means a simple version of Ptolemy’s text (although based on Angelus’s translation), but contains a mixture of other mythological, geographical and cartographical elements, including information from sources as varied as Strabo, Pomponius Mela, Pliny, Guido of Ravenna, Flavio Biondo and contemporary portolans.

Francesco Berlinghieri was a Florentine humanist, pupil of Argyropoulos and Landino, and a member of the Academia Platonica of Marsilio Ficino, who has here added a short paragraph in Latin addressed to Federigo da Montefeltro (1422–1482), to whom Berlinghieri dedicated the work (f. *2 verso). Berlinghieri had originally intended to dedicate it to the Turkish Sultan Mehmet II (Gentile).

Federigo da Montefeltro, Duke of Urbino, died on 10 November 1482, and printing must therefore have been finished before that date, and after 17 April of the same year (the establishment of the league against the Venetians and the Pope during the War of Ferrara, mentioned by Ficino). It is generally dated before September 1482. Federigo was a great collector of manuscripts (famously acquired from Vespasiano da Bisticci), but owned a goodly number of printed books as well, and had obtained a manuscript of Ptolemy in Greek which Palla Strozzi had acquired a century earlier. This Federigo kept in a cedar box (Fiocco).
The Vatican Library has a finely decorated manuscript of Berlinghieri’s work, made for presentation to Federigo, but in the event (because of his death) presented to his son Guidobaldo. In the Biblioteca Nazionale Braidense in Milan is another finely decorated manuscript, this time made for the wedding of Lorenzo de’ Medici. The text of the two manuscripts shows little variation, but the maps are not the same.

The 31 maps comprise the normal number of Ptolemaic maps (world map, ten of Europe, four of Africa, 12 of Asia) plus four new ones: ​‘Novella Italia’, ​‘Hispania novella’, ​‘Gallia novella’ and ​‘Palestina moderna et Terra Sancta’. These new maps, also found in the Braidense manuscript, are thought by some to be based on those of Pietro del Massaio of Florence (c1420–1480) which are found in three manuscripts of Ptolemy by Hugo de Comminellis (the scribe of the famous Urbino Bible, written in Florence 1476–1478, and decorated by Attavante and others, now in the Vatican Library, Urb. Lat. 1–2). The Vatican manuscript’s maps are considered to be closer to those of the third redaction of Ptolemy made by Nicolaus Germanus, which appear in the Ulm edition of Ptolemy. 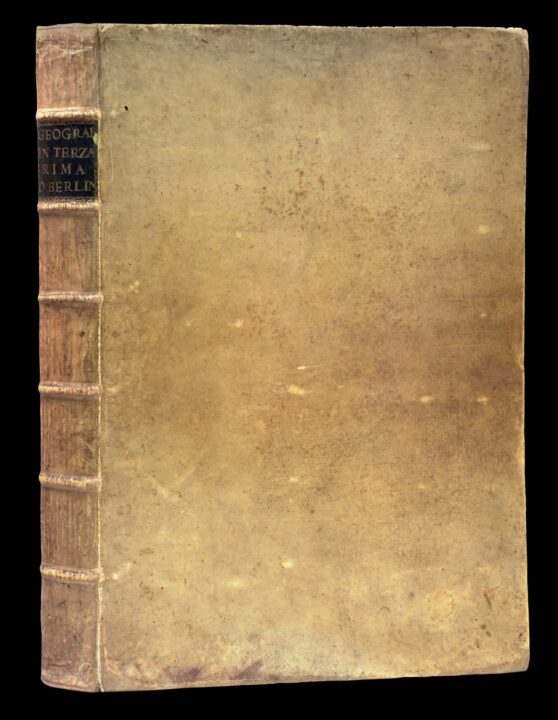 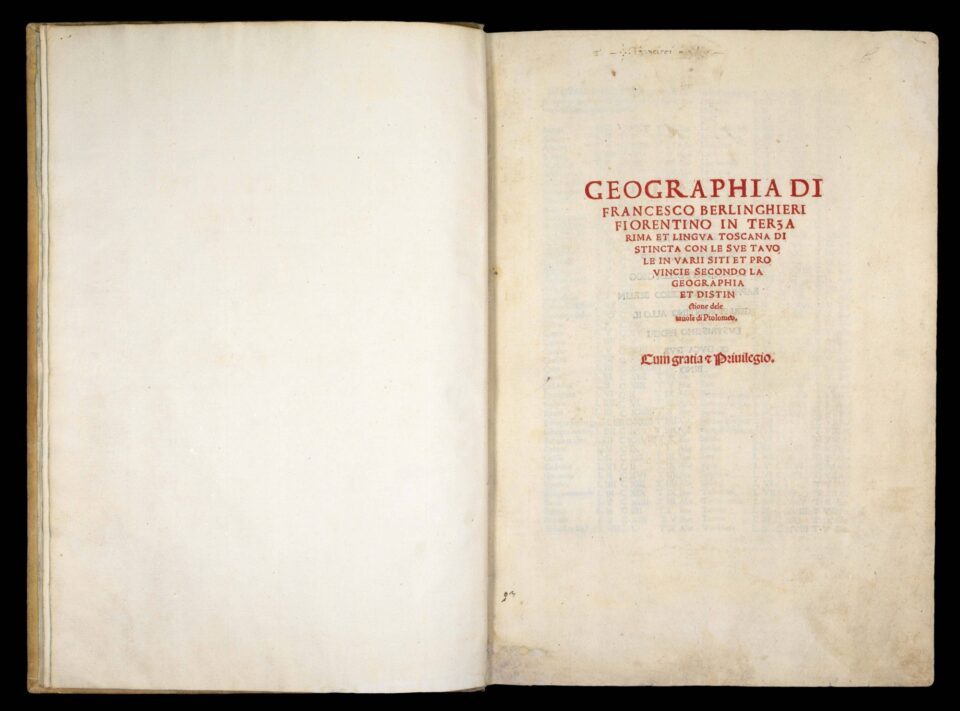 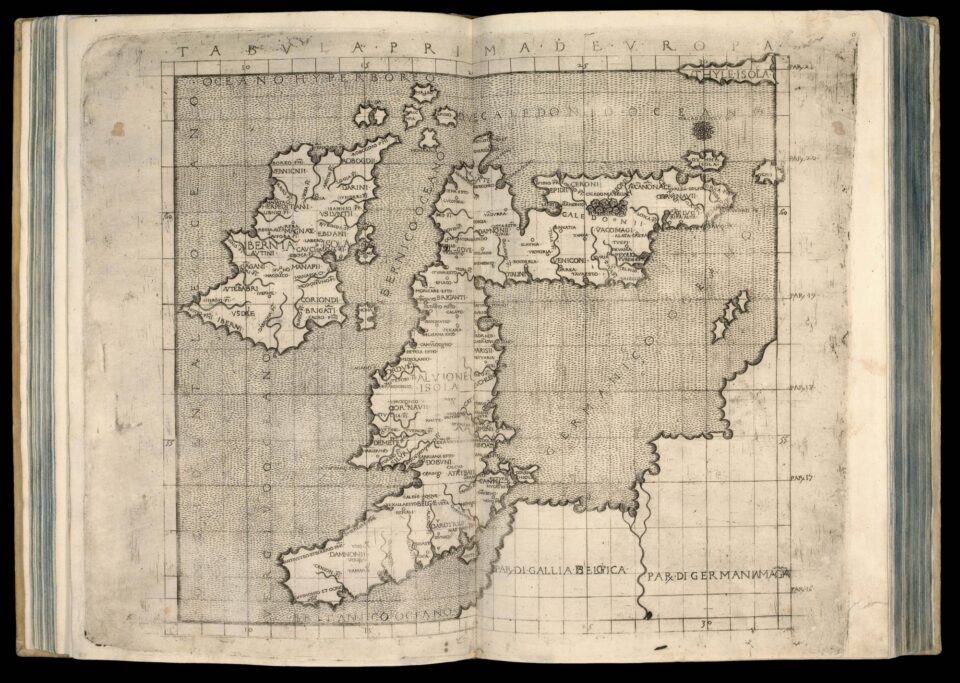 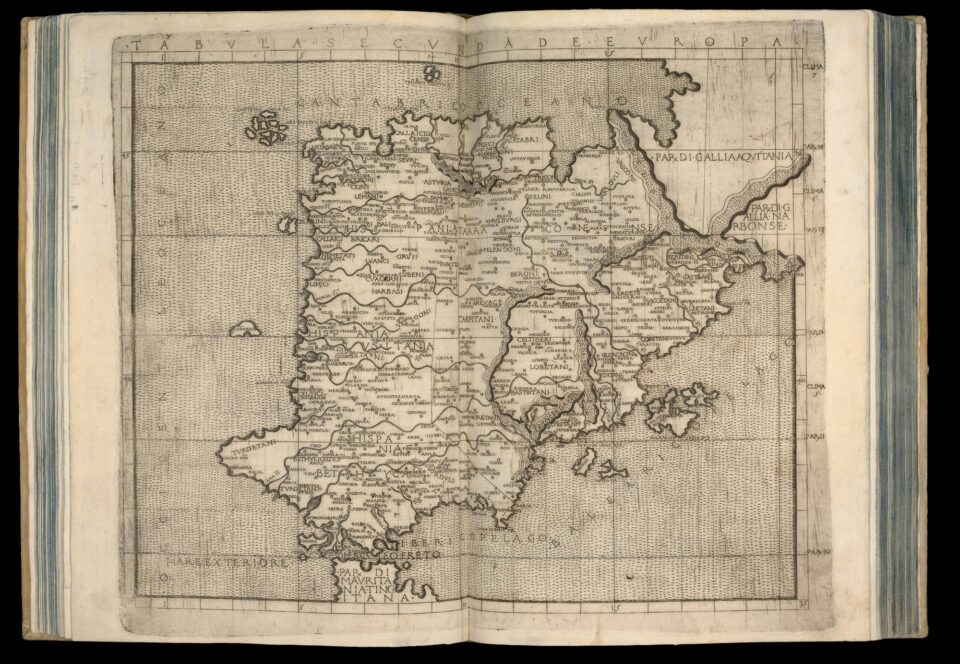 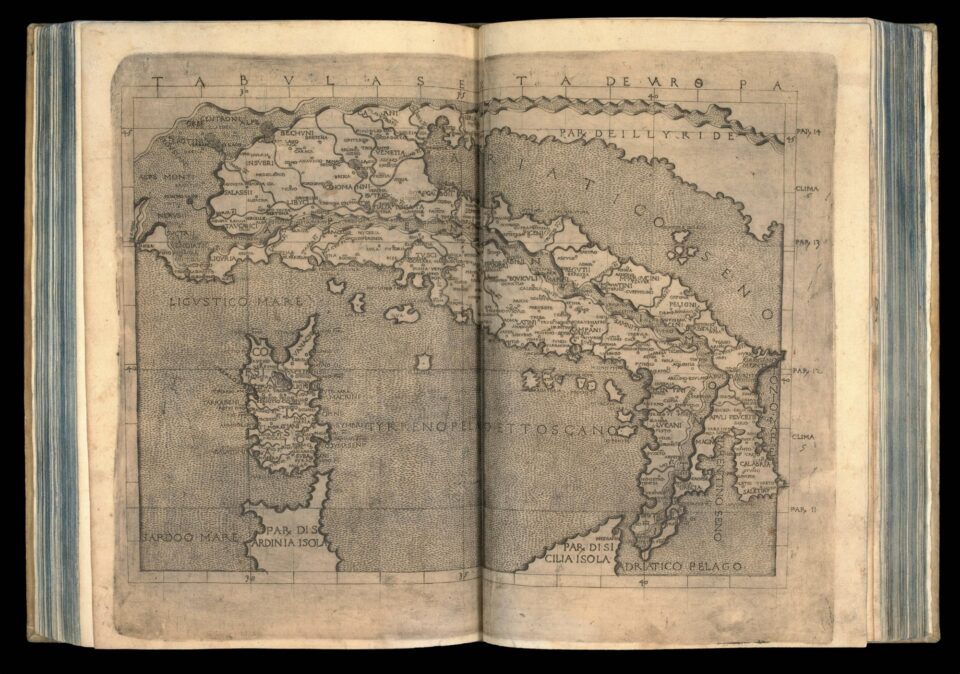