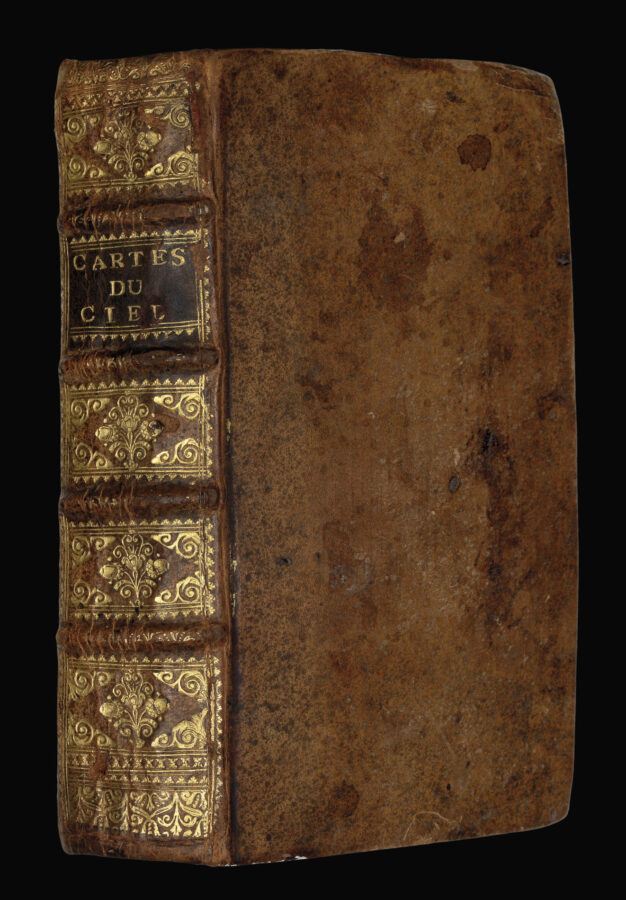 The first French edition, and the first in any vernacular language of Halley’s catalogue of stars in the southern hemisphere, here complete with the extremely rare celestial map, and bound together with Royer’s exceptionally rare star charts.
Edmond Halley (1656–1742) became an assistant to John Flamsteed, the Astronomer Royal at the Greenwich Observatory, in 1675 and, among other things, was tasked with cataloguing the heavens and assigning every star a number. In 1676, Halley visited the south Atlantic island of Saint Helena and set up an observatory containing a large sextant with telescopic sights, in order to catalogue the stars of the southern hemisphere. While there he observed a transit of Mercury, and realised that a similar transit of Venus could be used to determine the absolute size of the Solar System. In 1679 Halley published the results from his observations on St. Helena in the present work, which includes details of 341 southern stars. These additions to contemporary star maps earned him the epithet ​“the southern Tycho” by Flamsteed. A comparison with the great Tycho Brahe was high praise indeed from a man with whom Halley did not always see eye-to-eye. As a result of this work Halley was awarded his M.A. degree at Oxford and elected as a Fellow of the Royal Society at the age of 22.

​“Halley gives a historical account of stellar catalogues, referring to the work of Flamsteed, Hevelius and Cassini, as well as providing a description of his voyage. He terms his catalogue a ​“supplementum catalogi tychonici”, as he derived his calculation from Brahe’s Historia Coelestis” (Macclesfield Science A‑C, lot 970).
Halley’s work is here bound after Royer’s exceptionally rare celestial catalogue of 800 stars. This work contains four celestial maps: two polar (extending approximately 23.5 degrees south or south respectively), and two centred on the summer and winter solstices, covering half of the zodiac from equinox to equinox along the ecliptic in an area ranging from 35 degrees north to 35 degrees south. Royer’s charts depict four constellations for the first time. Lilium (the Lily,
in honour of Louis XIV, and representing the emblem of France); Sceptrum et Manus Justitiae (the Sceptre and the Hand of Justice); Columba (the Dove), and Crux Australis (the Southern Cross). Royer was also the first to show the Southern Cross ​“as a distinct constellation in a flat star map” (Brown). Petrus Plancius produced the first depiction of the Southern Cross in 1589, and Johann Bayer’s 1603 star atlas included the asterism, but both authors showed it as part of Centaurus rather than a separate constellation.

Most of Royer’s work is occupied by a ​“Table universelle des longitudes et latitudes des estoilles corrigée et eugmentée par D. Anthelme, Chartreux à Dijon”. Anthelme Voituret was a monk who discovered the CK Vulpeculae, also called the Nova Vulpeculae, in 1670, probably the oldest catalogued nova variable. This nova was not detectable again for centuries until rediscovered in 1981.
The present example has two preliminary leaves (dagger 2) ​“une seconde table des constellations” not present in the Bibliothèque Nationale’s example, and four folding plates. The example formerly in the Macclesfield Library had only three.
​“Copies of Royer’s maps are very rare, and they influenced the maps and globes of Coronelli.” (Kanas).

According to Basil Brown, whilst there are very few surviving examples of Royer’s work, and we have been unable to trace any complete examples bound together with Halley’s catalogue, it was always the author’s intention for both works to appear together.

Thus, in his preface (“Au lecteur”) Royer states that the reader will find it convenient to add Halley’s catalogue as a second part of his own (“de le joindre comme une seconde partie au notre”). Also, Lalande cites the two works as belonging together: ​“Augustin Royer en 1679 publia 4 Cartes du Ciel avec un Catalogue de 1 800 étoiles fixes. Il avait ajouté à celles de Bayer & du P. Riccioli plusieurs étoiles nouvelles observées par le P. Anthelme Chartreux & il y joignit le Catalogue de étoiles australes que M Halley avait déterminées en 1677 dans son voyage à l’Isle de Ste Hélène & qui venait alors d’être publié en Angleterre” (Lalande).
Copies of Royer’s work are ​“extremely rare, especially in England. There appears to be no copy of this publication in Oxford, neither do the libraries of the Royal Society or the Royal Astronomical Society possess one. There is a copy in the British Museum. No copies are offered for sale in the catalogues of antiquarian booksellers” (Brown).
We have not been able to trace any examples of Halley’s work in the US. The Linda Hall Library, Missouri and the New York Public Library hold copies of the Royer, but neither of them contain the maps or the Halley book bound in.
OCLC records six institutional copies of Halley: British Library, Bodleian, UCL, Sainte Genevieve, Paris; Observatoire de Paris; Biblioteca Nacional, Madrid. We have been able to trace a total of seven institutional examples of the Royer (again, none are bound with the Halley): British Library; NYPL; Linda Hall; BnF, France; Observatoire de Paris, France; Lausanne, Switzerland; Augsburg, Germany.

Manuscript ex libris of ​“Cupis de Camargo, S. A. R. anno 1768”.
The Cupis de Camargo were a Belgian family who lived in Paris during the eighteenth century. Whilst it is unclear as to which family member the book belonged, it was probably the famous dancer Marie Anne de Cupis de Camargo (1710–1770), whose portrait by Nicolas Lancret hangs in the National Gallery of Art, Washington. She was a well known bibliophile and her library was sold after her death by the printer Prault.
The other possible original owner is her brother, the equally artistic Jean-Baptiste de Cupis de Camargo (1711–1788), a composer and noted violinist. 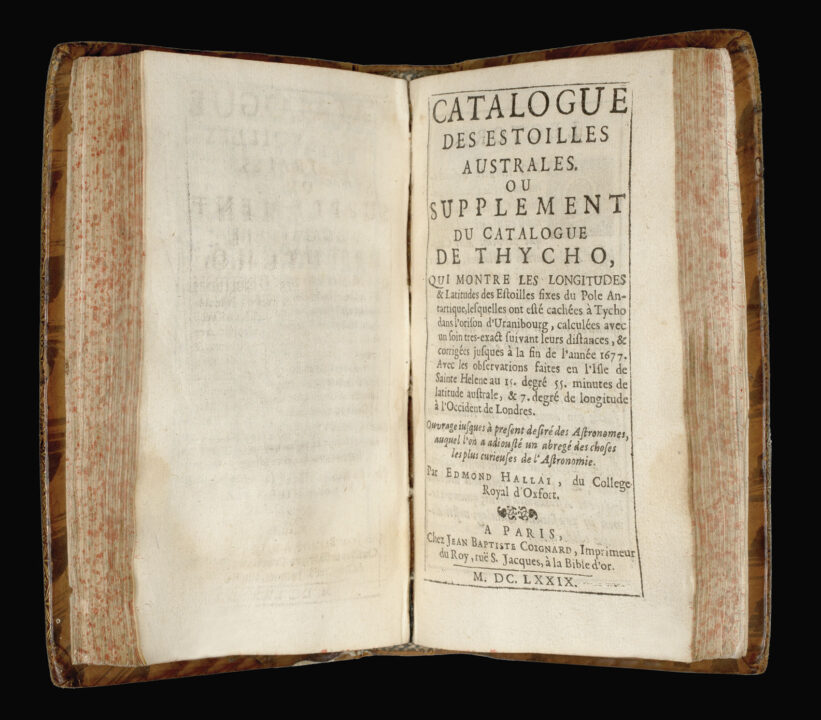 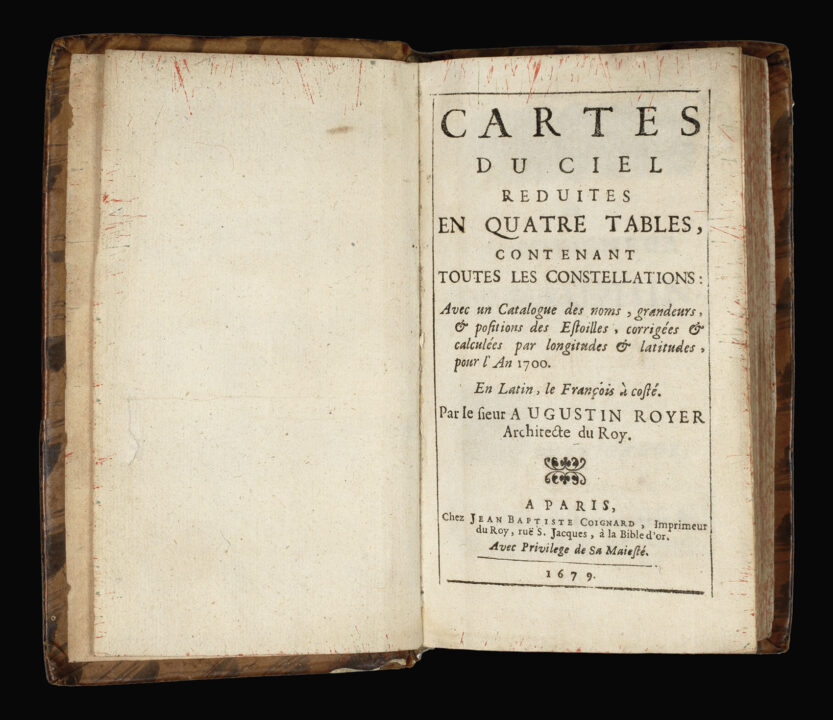 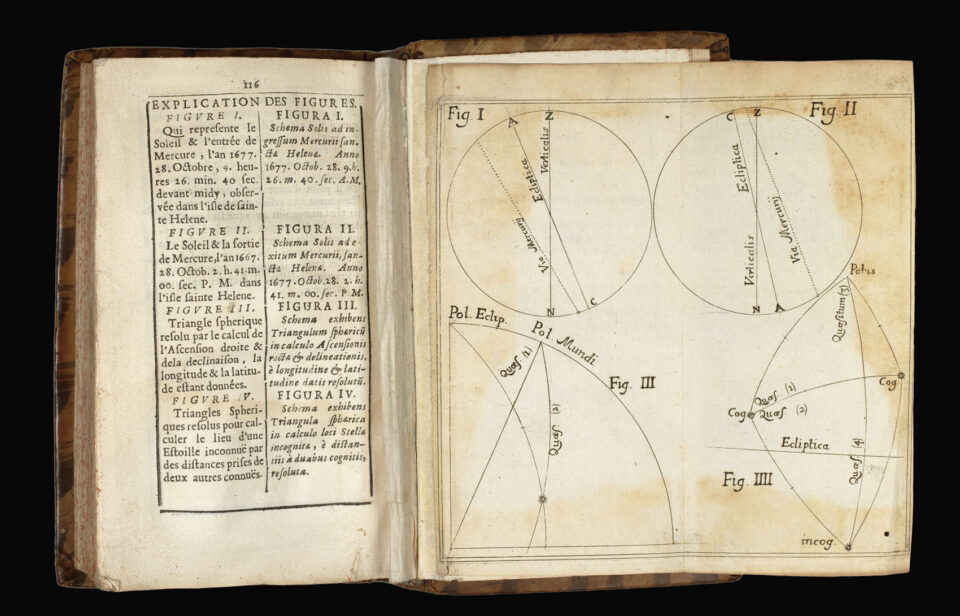 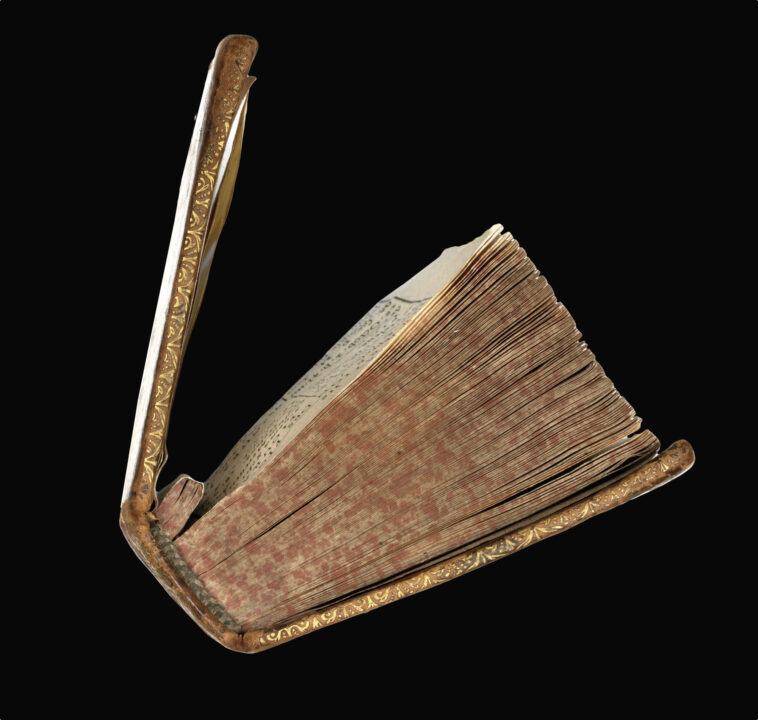 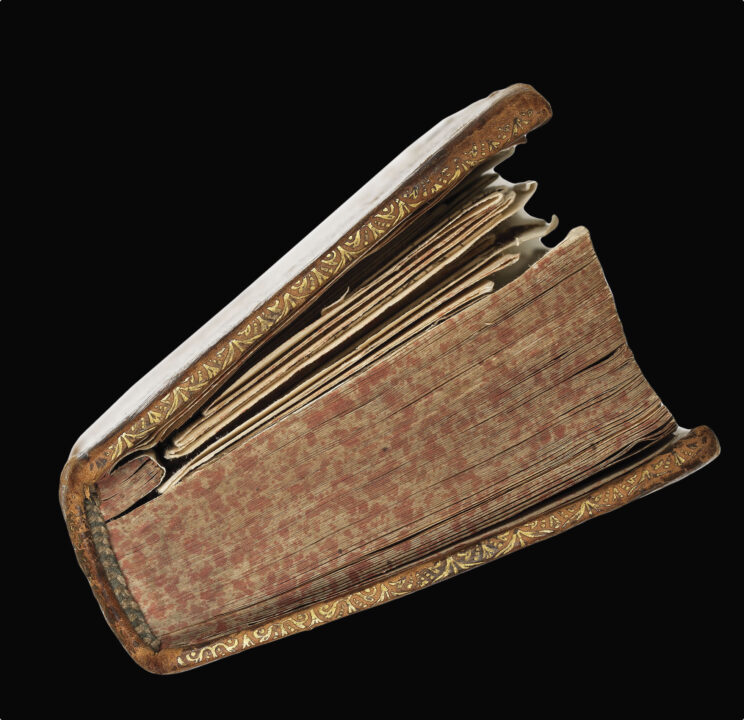 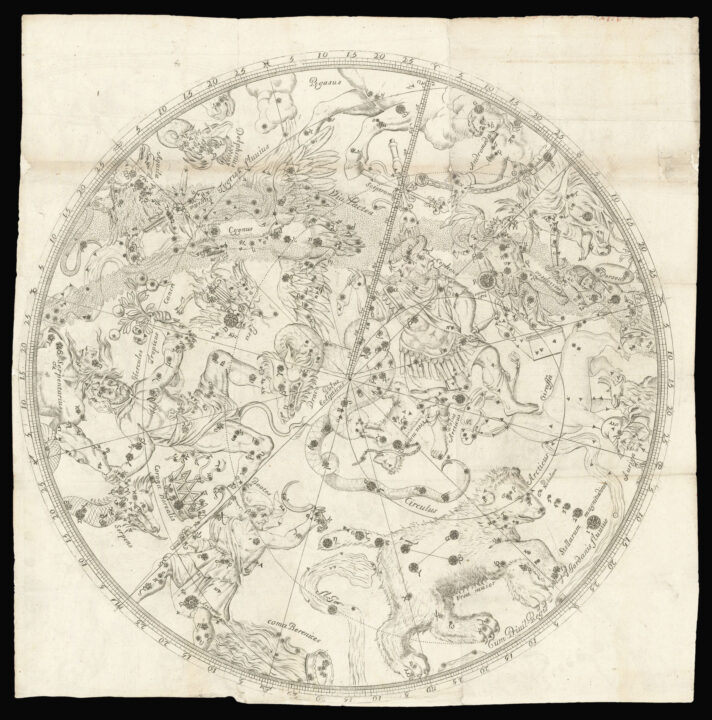 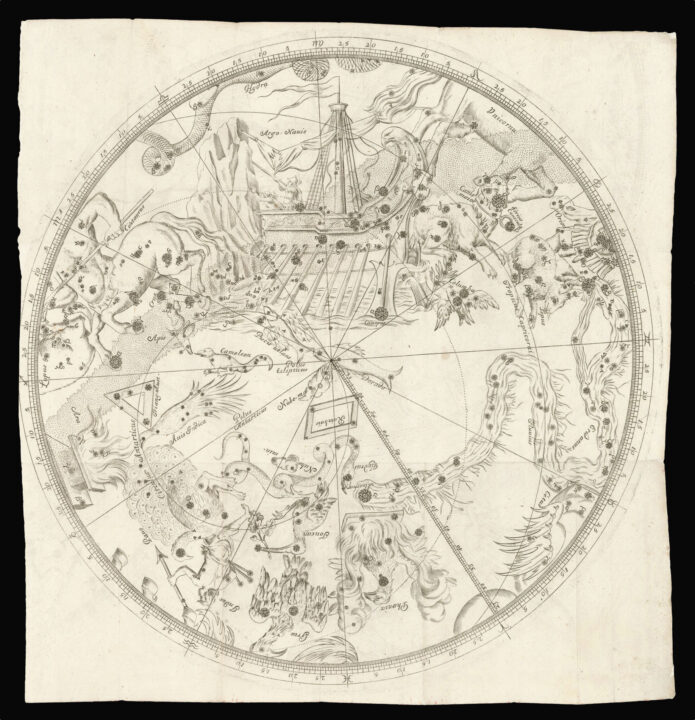 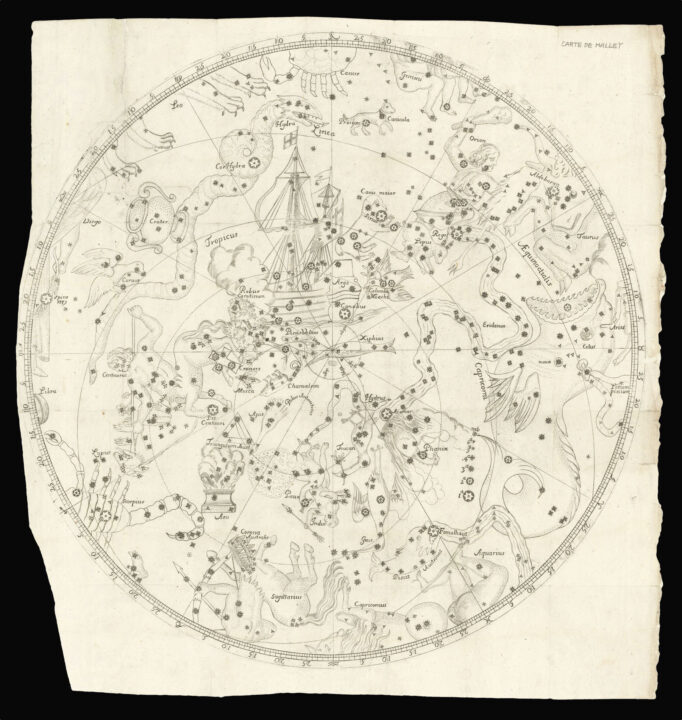