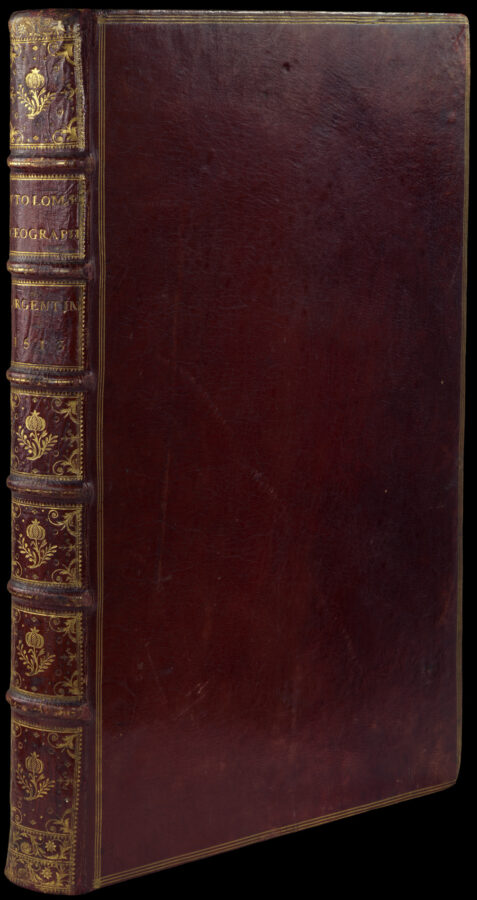 The Heber copy of the first Strassburg edition of Ptolemy’s Geographia; the first ​‘modern’ atlas

The 1513 edition is one of the most important of all editions of Ptolemy: The 27 maps of ancient geography which constitute the first part of the work are copied from the 1482 Ulm edition. The supplement of 20 maps represents the first series of ​‘modern’ maps, produced by Martin Waldseemüller at Saint-Dié. The new Latin translation of the text by Mathias Ringman is based on d’Angelo’s text, and was edited by Jacob Aeschler and George Uebelin.

This geography includes many important maps; the first map devoted to America ​‘the Terra Incognite’; Lorraine, one of the earliest colour printed maps; and for many other countries, the first published maps, notably the map of Switzerland, which is styled differently and probably adapted from a manuscript map by Konrad Türst c.1495. Waldseemüller’s maps made considerable geographical advances, basing his information on material in the University libraries in Basel and Strassburg, as well as reports on Spanish and Portuguese voyages. No better assemblage of maps was issued until Ortelius’ ​‘Theatrum Orbis Terrarum’ of 1570. The long documented provenance of this example is particularly interesting: The first owner being a Latin teacher in Besançon, and more recently its acquisition by Heber from the London stock sale of the Paris booksellers Treuttel and Wurtz in June 12 1817. Richard Heber’s collection was one of the greatest of its type and was sold in 16 catalogues from 1834–1837 in London, Paris and Ghent.

Lactancius de Ferro [of Bisuntium [Besançon] (sold by his widow to): Ainbelin (his Latin note dated 17th March 1515 stating he bought the book from the wdow of Lactancius de Ferro, a deceased Latin teacher in Bisuntium, for 5 French coins, and his annotations on both maps of France, the modern map marked with the location of Bisuntium; late sixteenth century note in Latin, bought at Bisuntium 8th January 1551[?] De Belot, (Chevigny eighteenth century inscription on title); Richard Heber (his inkstamp on front free endpaper and note ​‘for £7.7.0 Bo[ugh]t by Triphook at Tr[euttel] of W[ürtz] sale June 1817’; Trewithan (bookplate dated 1933).