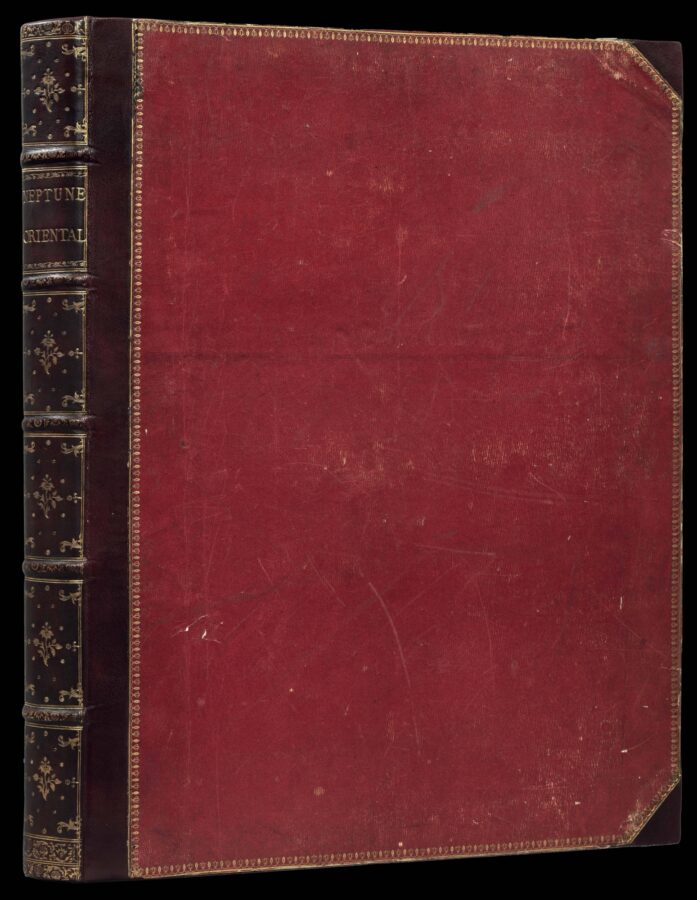 The greatly enlarged second edition of this rare French Sea Atlas showing the coasts of the East Indies, Indochina and Formosa, Africa, Australia, the Red Sea, and India. It includes some fine maps of the Arabian Peninsula, one covering the central portion of the western coast of present-day Saudi Arabia.
Jean Baptiste Nicolas Denis d’Apres de Mannevillette (1707–1780) was a famous French sailor and hydrographer. He was the son of a French sea-captain and, at the age of twelve, sailed with his father to Bengal.
After his return he studied astronomy and geometry in Paris. During a long career in the French merchant marine, starting as fourth officer in 1726, he visited many parts of the world and collected valuable navigational information. He studied under the famous Guillaume Delisle, the King’s geographer. He experimented with improved scientific instruments and navigational methods. During his voyage to China in 1728 he was the first to use the octant (or Hadley’s quadrant) on a voyage to measure latitudes, and determined longitudes by measuring the angular distance between the moon and sun and succeeded in correcting the latitudes of many place. He first visited the Cape of Good Hope in 1737 while on his way to China as a lieutenant aboard the Prince de Conti. During his many voyages d’Apres de Mannevillette created a number of charts for a hydrographic atlas which, with the support of the Academie des Sciences, was published in Paris in 1745 under the title ​“Le Neptune Oriental” with 25 maps. The atlas contained charts of the route to China: the Red Sea, the coasts of India, Malaya, the northern parts of Indonesia, Indochina and China.
​“The new sea atlas quickly found its way into the pilot cabins of ships of several nations, and its 22 charts were immediately recognised as being superior to all previous maps of Southeast Asian coasts” (Suárez p.238).
In 1745 he published an important collection of sea-charts titled ​‘Le Neptune’ oriental which established his reputation as a cartographer and remained authoritative for more than half a century. In 1751 his work on navigational instruments and methods, ​‘Description et usage d’un nouvel instrument pour observer la latitude sur mer…’ was published in Paris. It included a discussion of the new English quadrant and various observational methods.
In 1762 the Compagnie des Indes — French East India Company
— appointed D’Apres de Mannevillette as director of maps and plans at Lorient, and five years later he was decorated with the order of St. Michael. In 1765 he published his ​‘Memoire sur la navigation de France aux Indes’, which was translated into English (1769) and Dutch (1770), and served all who sailed round the Cape to the East. The 1768 edition includes descriptions of Tristan da Cunha, False Bay, and Simon’s Bay.
Mannevillette spent 30 years, often in concert with his friend, and eminent British hydrographer, Alexander Dalrymple, working on the second edition of his maritime atlas. It was substantially enlarged from the first edition of 1745 and was heavily used throughout the end of the eighteenth and beginning of the nineteenth centuries. Most maps are now corrected with paste-on labels, and among the many new charts prepared by Dalrymple is his famous map of Hong Kong area: ​‘Carte d’une partie des Côtes de la Chine et des Isles adjacentes depuis l’Isle nommée la Pierre Blanche, jusqué à celle de l’Artimon’. This milestone chart was based upon Dalrymple’s surveys and soundings taken in 1754, 1759, and 1760. The chart extends from just West of Macao, which is shown, as is ​‘Bocca’. Tigris narrows on the Pearl River to the North.
Prominently shown are the islands around present-day Hong Kong with Lantao and Lamma both identified. Hong Kong island is depicted and identified as Fanchinchow with its island nature only tentatively shown. The promontories of Stanley Peak and D’Agular Peaks both tentatively shown in dotted outline.
This comprehensive atlas was used on all French ships for navigating the Indian Ocean. It replaced the ​“English Pilot” published by John Thornton in 1700 and the charts of the van Keulens, the hydrographers of the Dutch East India Company.
This second edition eventually required a supplement, published posthumously in 1781 and reissued in 1797. The second edition includes some fine maps of the Arabian Peninsular. One of the charts covers the central portion of the western coast of present-day Saudi Arabia. Jeddah, the largest port on the Red Sea and a major gateway to Mecca, is the only city shown. The rest of the detail is confined to the sea, which is filled with rhumb lines, soundings, hazards, shoals, and anchorages. 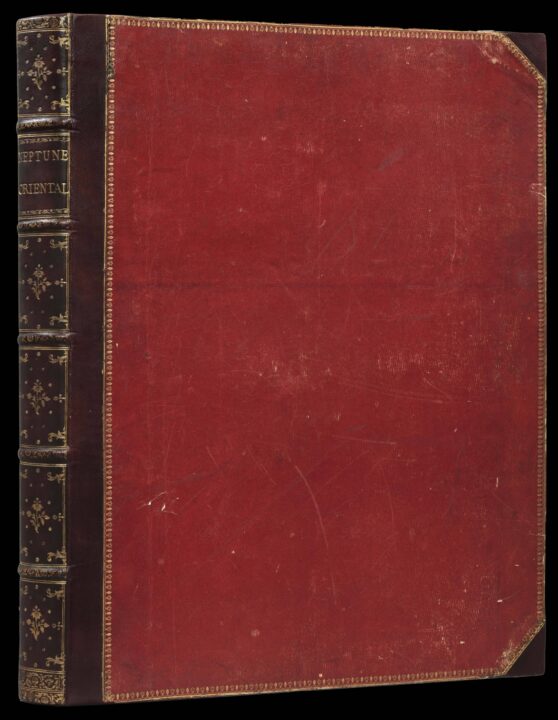 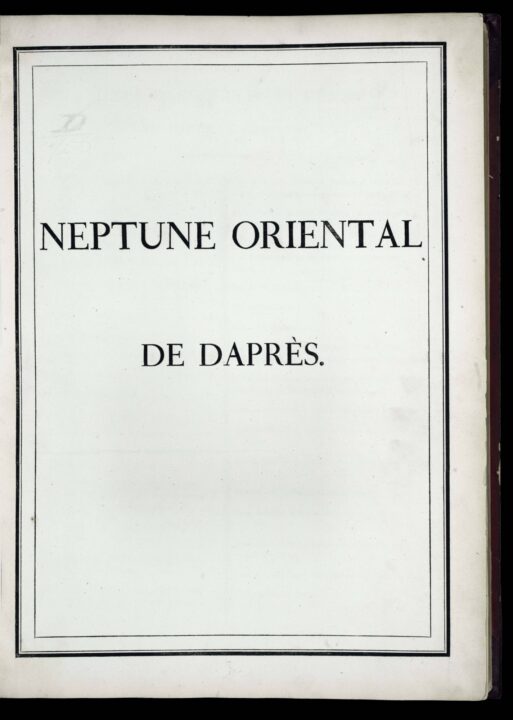 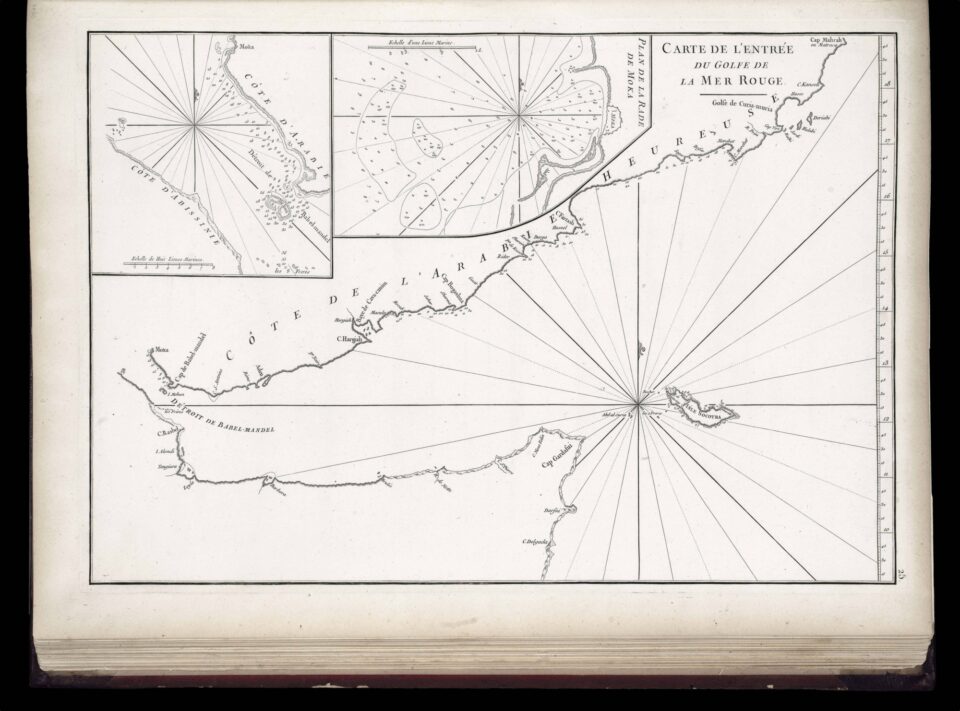 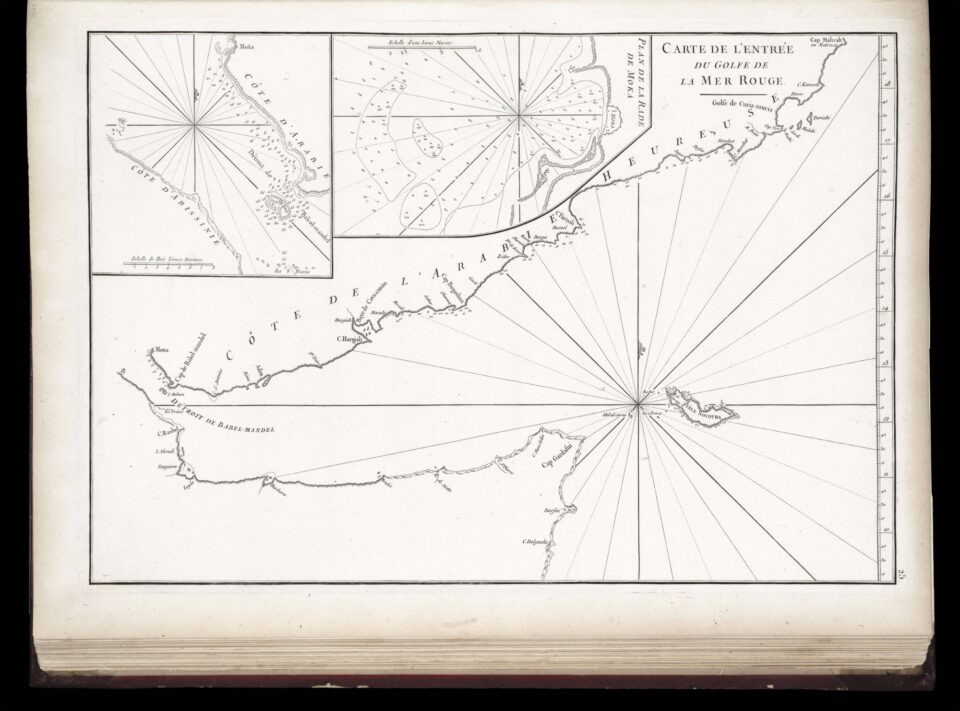 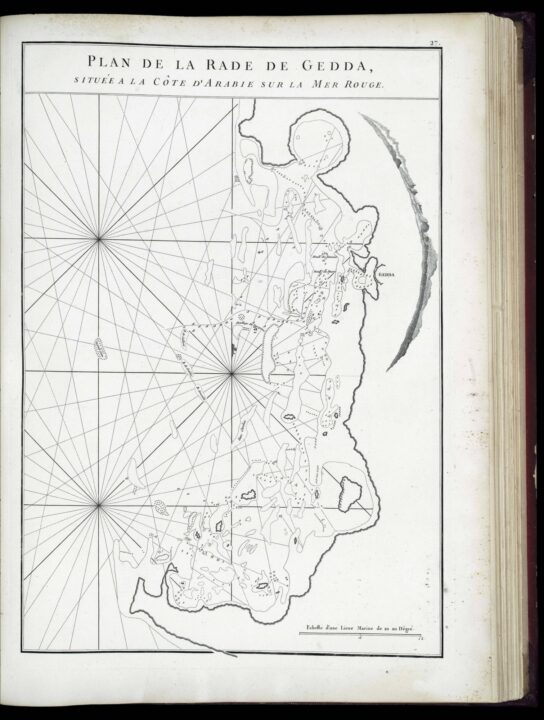 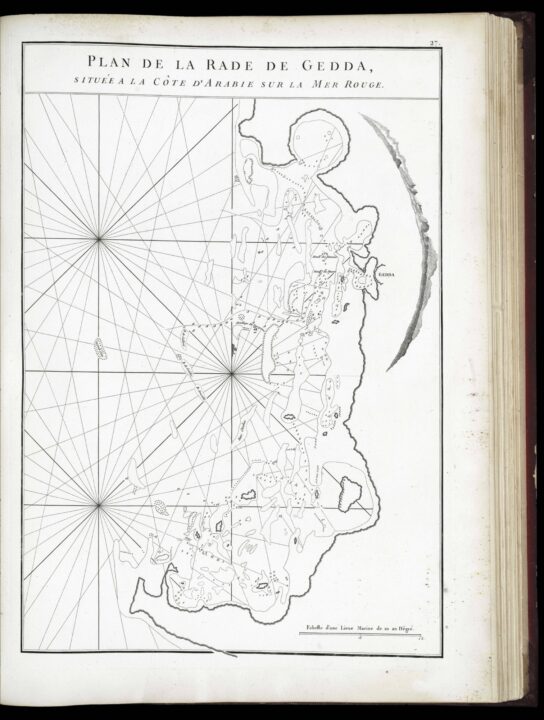 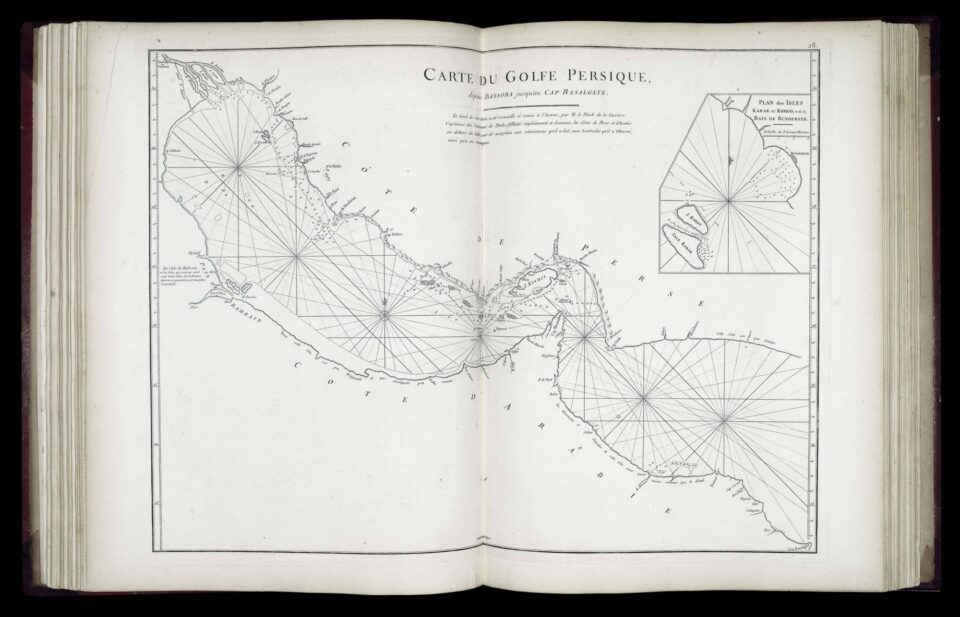 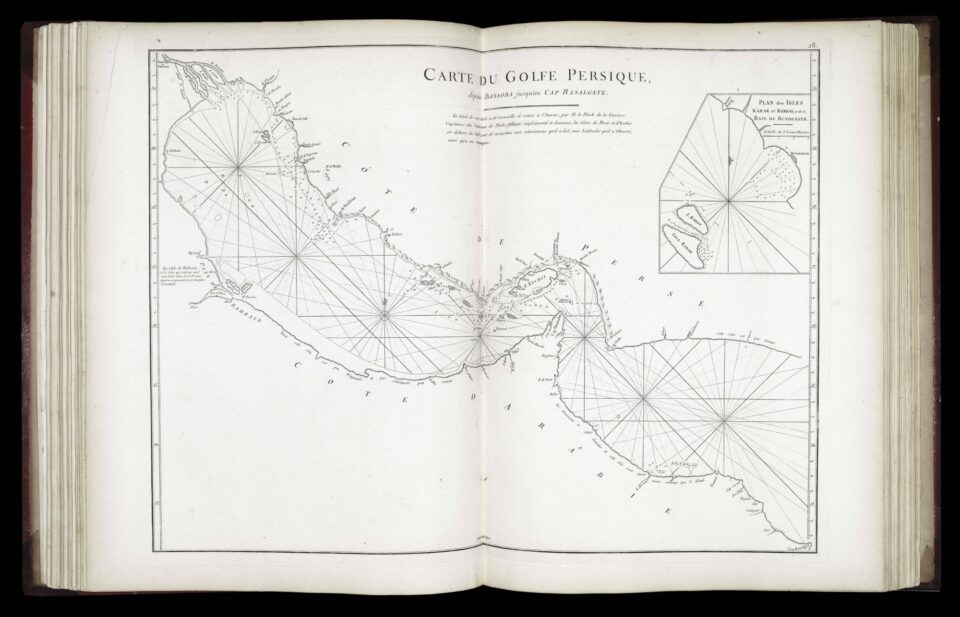 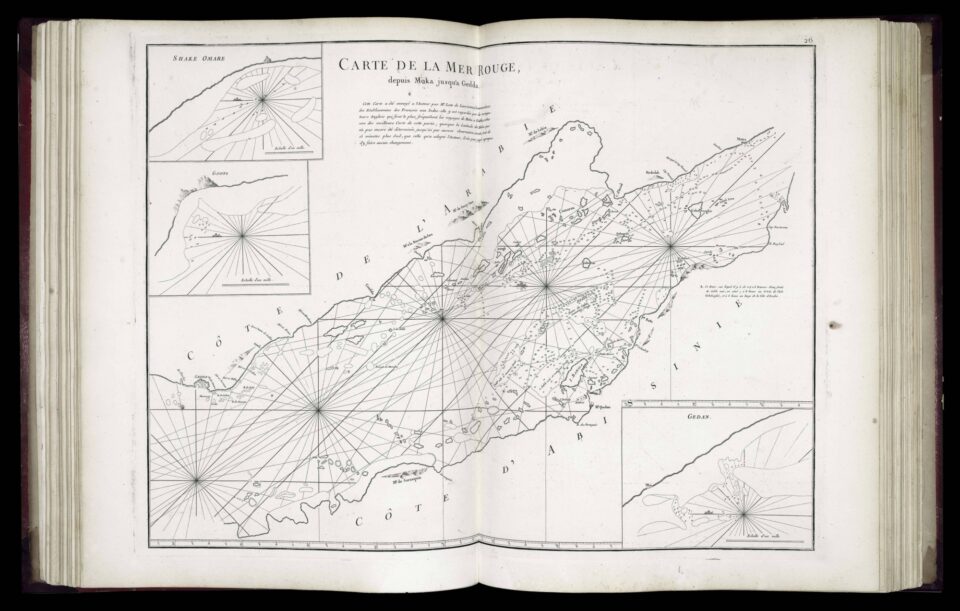 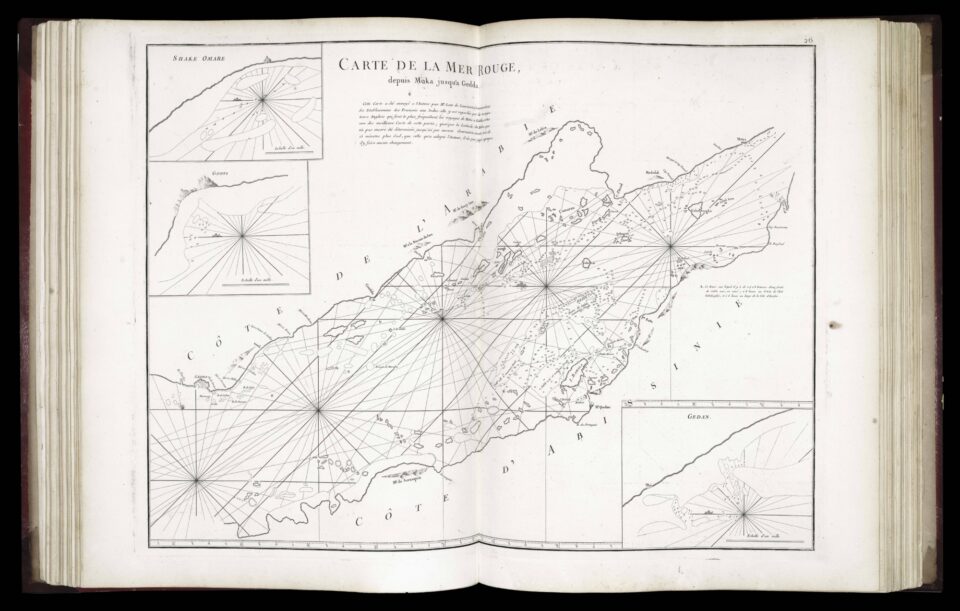 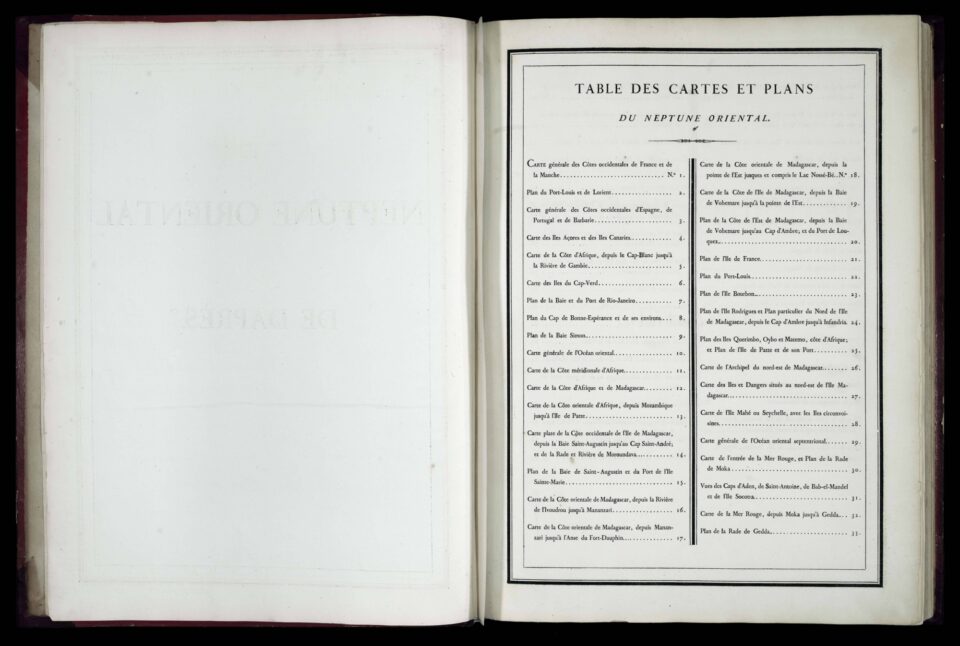 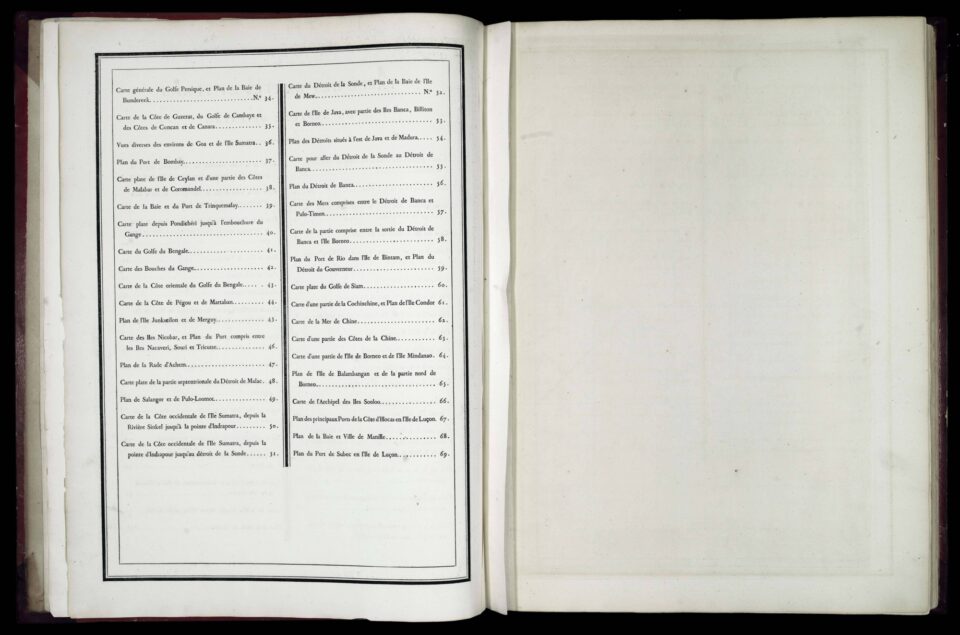