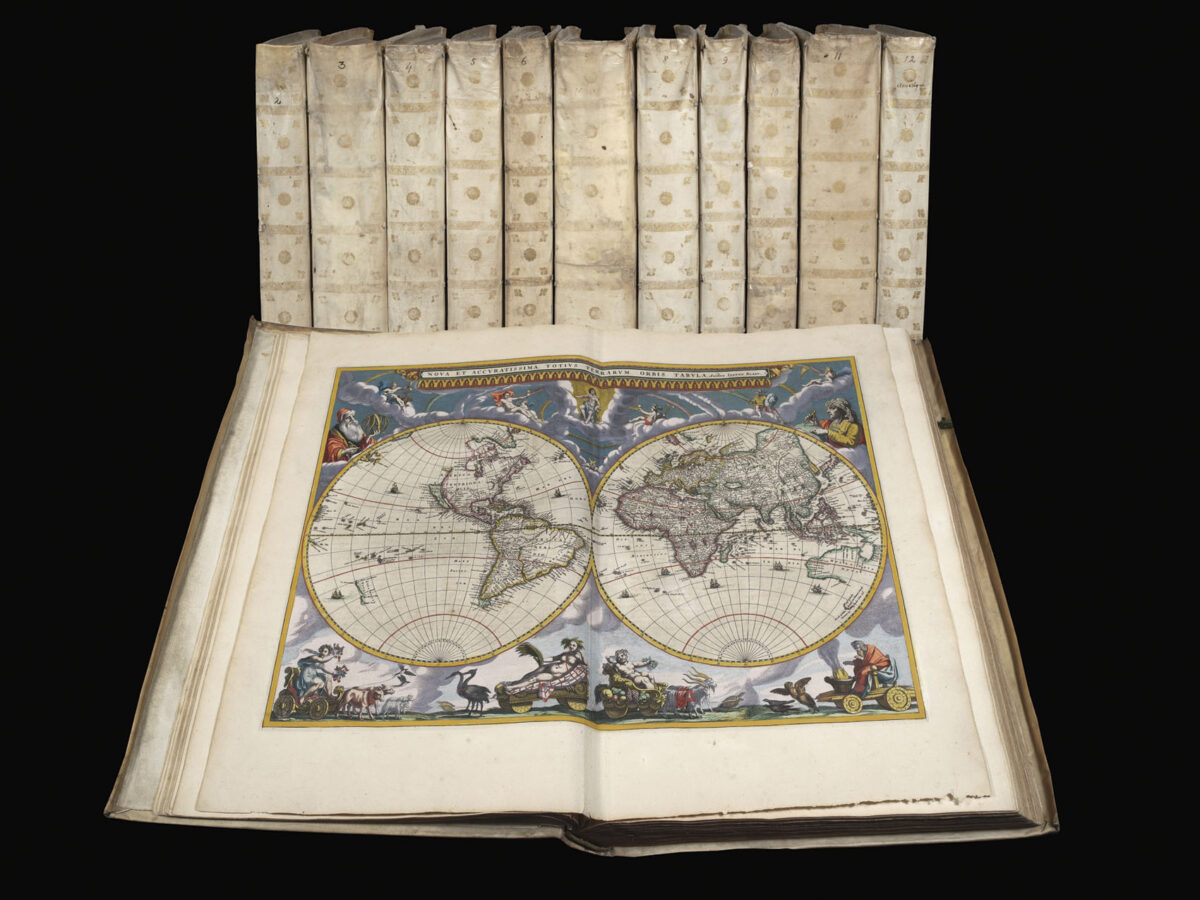 An exceptionally attractive example of ​“the greatest and finest atlas ever published” (Verwey).

The ​‘Atlas Major’ in its various editions was the largest atlas ever published. It was justly famed for its production values, its high typographic standard, and the quality of its engraving, ornamentation, binding, and colouring. The atlas frequently served as the official gift of the Dutch Republic to princes and other authorities. It is one of the most lavish and highly prized of all seventeenth-century illustrated books.

​“In its sheer size and scale it surpassed all other atlases then in circulation, including the efforts of his great predecessors Ortelius and Mercator” (Brotton). The work was published simultaneously in five different languages: Latin, French, Dutch, Spanish, and German. The French ​‘Grand Atlas’ was the largest of the five editions, with the volume concerning France split into two books to make a total of 12 volumes. Blaeu managed to contain the world in a book, an endeavour that in many respects would never be equalled.

Publication history
Blaeu’s great work was born in 1630 when he published his first atlas, the ​‘Atlas Appendix’. The book consisted of 60 maps, and was billed by Blaeu as a supplement to Mercator’s atlas. His great rivals, Henricus Hondius and Johannes Janssonius, had expanded and reissued Mercator’s work. They were so frightened of Blaeu’s move into the publication of atlases that they rushed out a rival ​‘Appendix’ by the end of the same year.

Over the next 30 years this great publishing rivalry would spur the production of ever larger and more lavish atlases. In 1634, Willem Blaeu produced his ​‘Atlas Novus’, containing 161 maps; this was expanded in 1635 to two volumes, containing 207 maps. The house of Blaeu was so successful that in 1637 they moved into larger premises. The new building was the largest printing house in Europe, with its own print foundry and nine letterpresses. Unfortunately, Willem did not live long after the move and he passed away the following year. He was succeeded in business by his son Joan, who also inherited the lucrative and influential post of Hydrographer to the Dutch East India Company (VOC).

Over the next 20 years Joan expanded the ​‘Atlas Novus’: adding a third volume in 1640 covering Italy and Greece; in 1645, a fourth volume on the British Isles; and in 1654 a volume relating to China, the Atlas Sinensis. This was the first western atlas of China, based on the work of the Jesuit Marteo Martini. Janssonius managed to keep pace with his more illustrious rival. In 1646 he published a four volume atlas, adding a fifth – the first folio sea atlas – in 1650, and in 1658 a sixth consisting of 450 maps, some 47 more than Blaeu’s similar work.

In 1662, Blaeu announced that he would auction his bookselling business in order to finance the imminent publication of his great atlas.

From a brief look at the numbers it is clear that Blaeu needed capital. The creation of the five editions took six years, from 1659 to 1665. It is estimated that 1,550 copies over all five editions were printed. If one totals up the entire print run, it comes to just over 5.4 million pages of text, and 950,000 copper plate impressions! Such a vast undertaking in capital and labour was reflected in the price of the work, with the French edition the most expensive at 450 guilders. The atlas was not only the costliest ever sold, but also the most expensive book of its day. To give some idea of comparative value, the average price of a house in Amsterdam at the time of publication was 500 guilders.

The maps
The maps are among the most beautiful ever made. Of particular note are the famous side-panelled maps of the continents, the 58 maps devoted to England and Wales (vol. V), Martini’s Atlas of China, the first atlas of China published in Europe (vol. XI), and a series of 23 maps of America, including important early maps of Virginia and New England (vol. XII).

Of particular note is the double hemispheric world map, newly prepared for the atlas by Joan. Jerry Brotton suggests that this is the first world map in an atlas to portray the Copernican solar system. 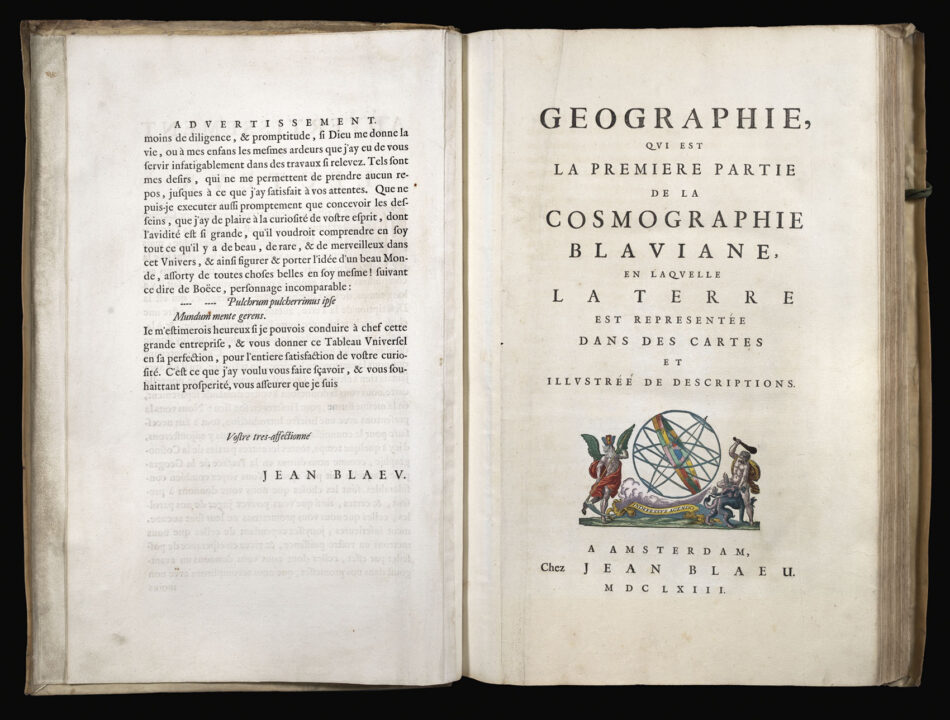 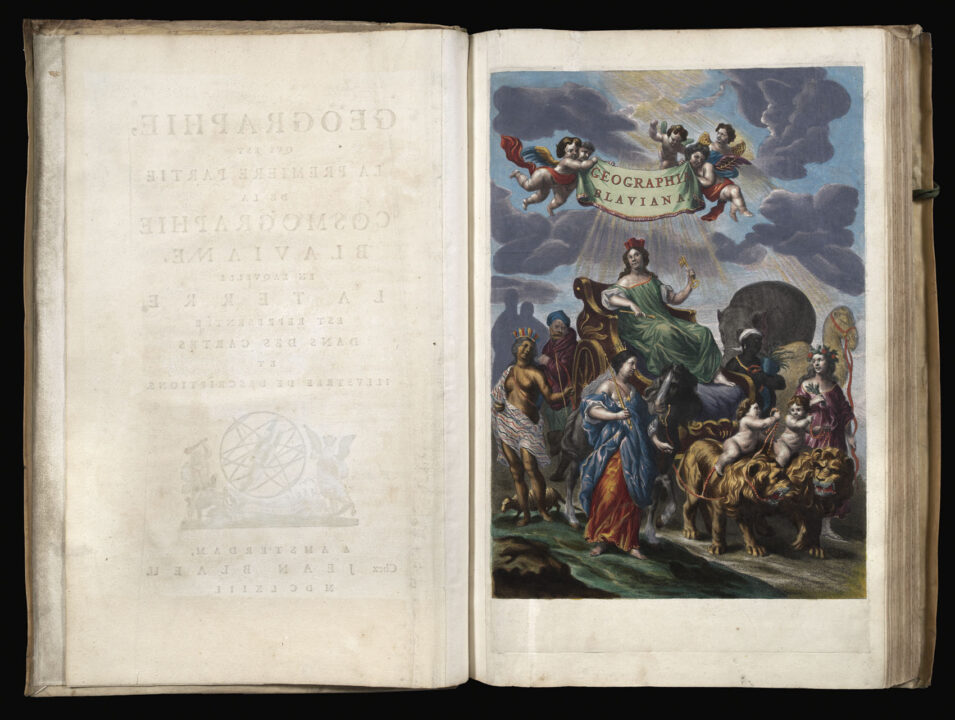 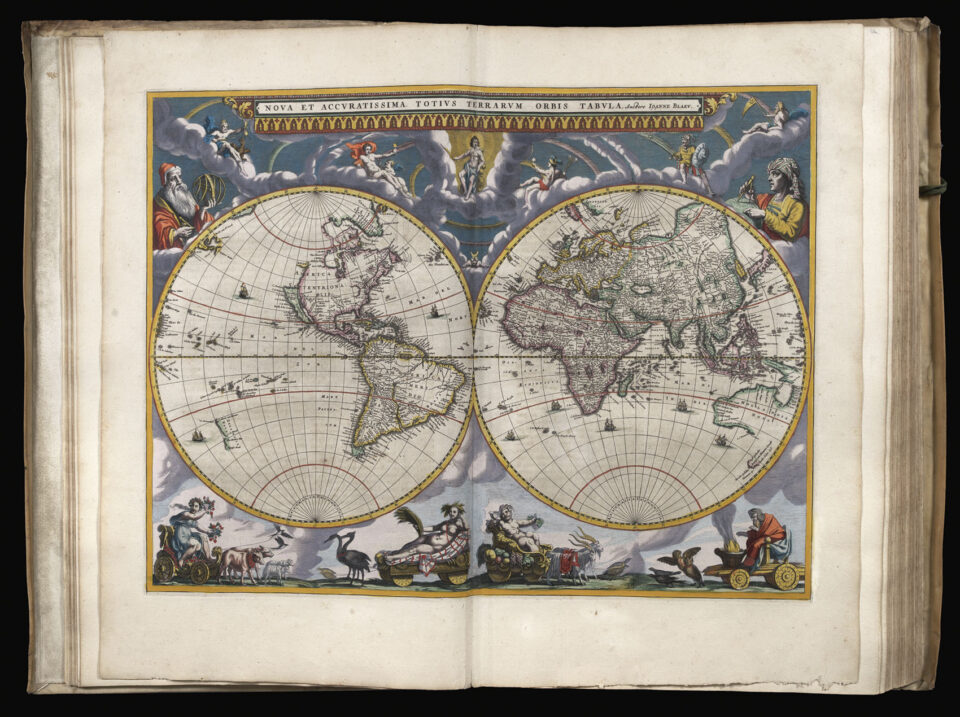 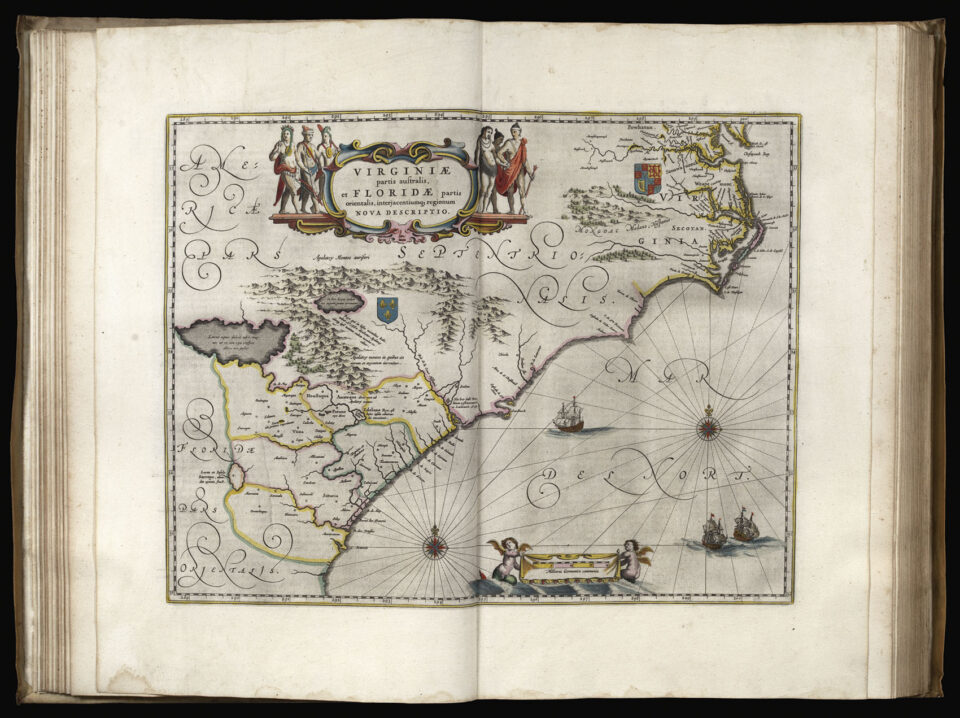 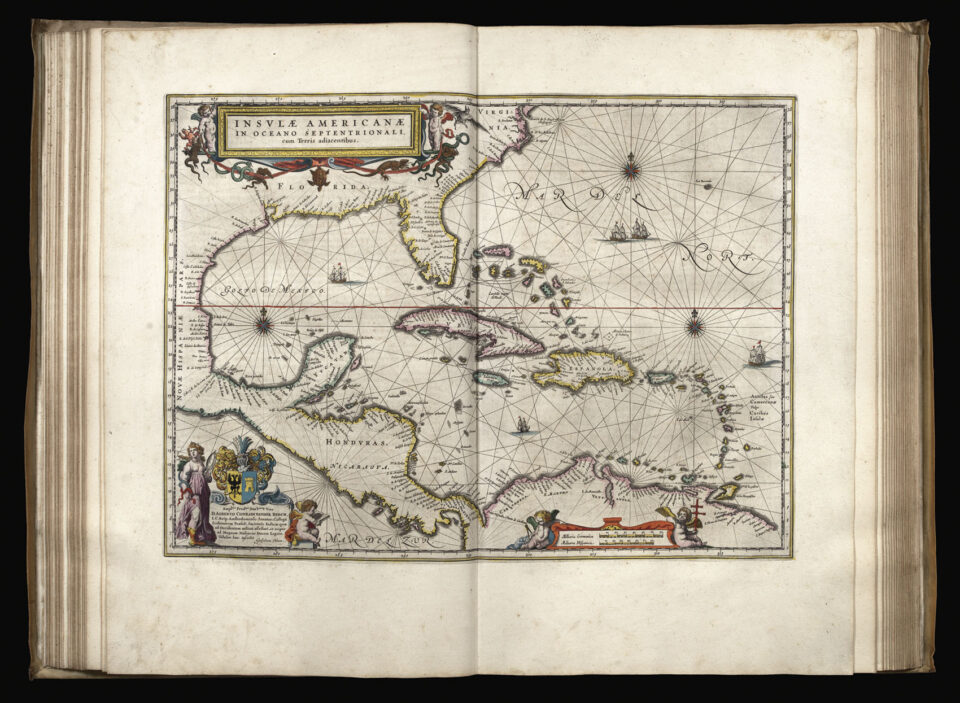 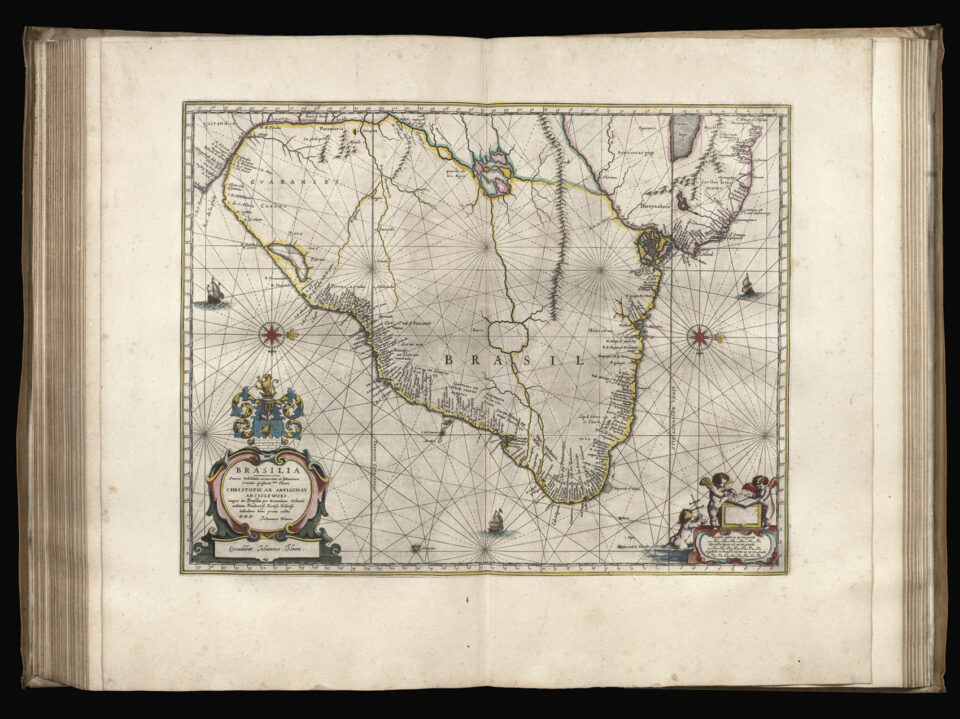 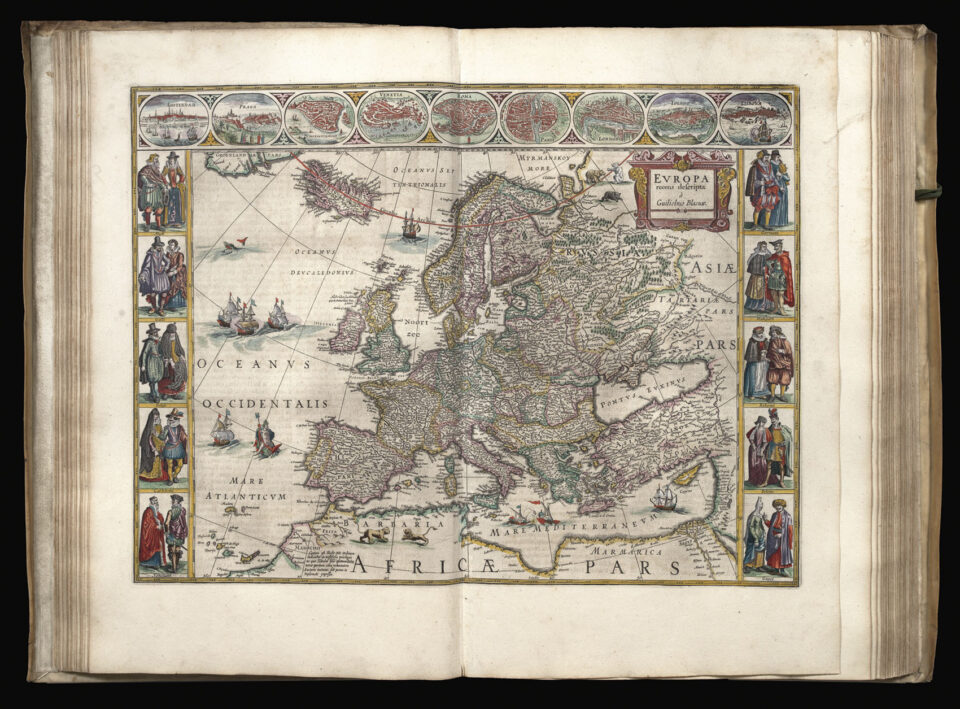