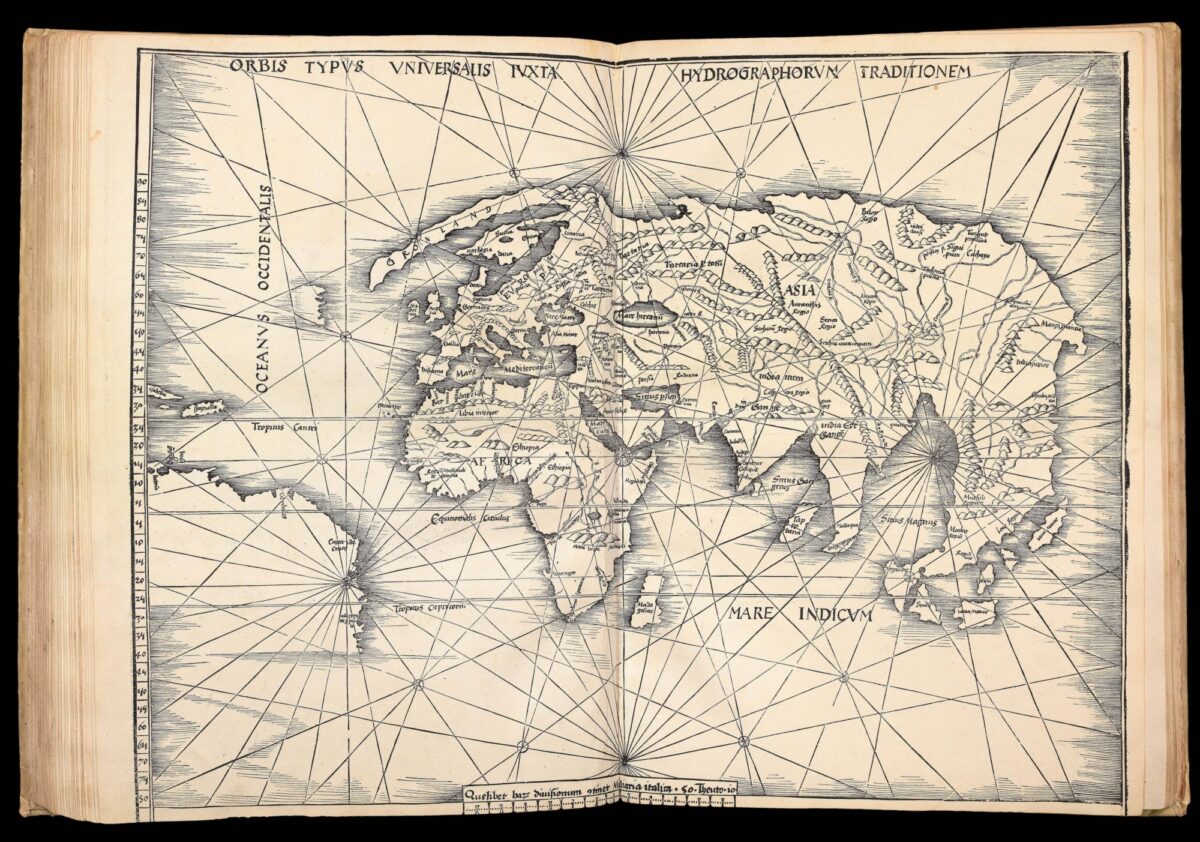 The geometrization of space: ​“the most important of all the Ptolemy editions”

A monumental work containing critical New World information, derived from the latest voyages of exploration, including the earliest atlas map devoted entirely to the New World (‘Terra Incognita’), the earliest map printed in more than two colours — and, for many other countries, the first published maps (notably the map of Switzerland, which is styled differently and probably adapted from a manuscript map by Konrad Türst c1495). It is ​“the most important of all the Ptolemy editions” (Streeter).

Cartography
This masterful atlas is one of the most important cartographical works ever published. Known as the first ​“modern” edition of Ptolemy, it is usually accepted as the most important edition of the ​‘Geographia’. The first part of the atlas consists of 27 Ptolemaic maps, taken from the 1482 Ulm Ptolemy or, possibly, the manuscript atlas of Nicolaus Germanus upon which the Ulm Ptolemy was based. The second part, known as the ​‘Supplement’, comprises 20 ​“modern” maps labelled either as ​‘Nova’ or ​‘Moderna et Nova’. Of these, ​‘Orbis Typis Universalis’ and ​‘Tabula Terre Nova,’ show the New World. The latter is considered the earliest map devoted entirely to the subject and depicts the coast of America in a continuous line from the northern latitude of 55 degrees to Rio de Cananor at the southern latitude of 35 degrees, with about 60 places named. The other map, ​‘Orbis Typis’ depicts the outline of northeastern South America, with five names along that coast, the islands ​‘Isabella’ (Cuba) and ​‘Spagnolla’ (Hispaniola), and another fragmentary coast, as well as an outline of Greenland. The text states that the New World maps are based upon geographical information obtained from ​“the Admiral”, and is often known as the ​‘Admiral’s Map’ for that reason. This is possibly a reference to one of the New World explorers: Amerigo Vespucci, Pedro Cabral, or Christopher Columbus. The latter is actually referred to by name on the ​‘Tabula Terre Nova’ map, and is described as a Genoese sailing under command of the King of Castile.

Printing
Two scholars based at the Gymnasium Vosagense in Saint-Dié, Martin Waldseemüller and Mathias Ringmann, began work on the 20 maps in the ​‘Supplement’ around the year 1505. Their work was initially conducted under the patronage of Duke René II of Lorraine (1451–1508). In a letter written to Johann Amerbach of Basel on April 7, 1507, Waldseemüller wrote:
​“I think you know already that I am on the point to print in the town of St. Dié the Cosmography of Ptolemy, after having added some new maps.” 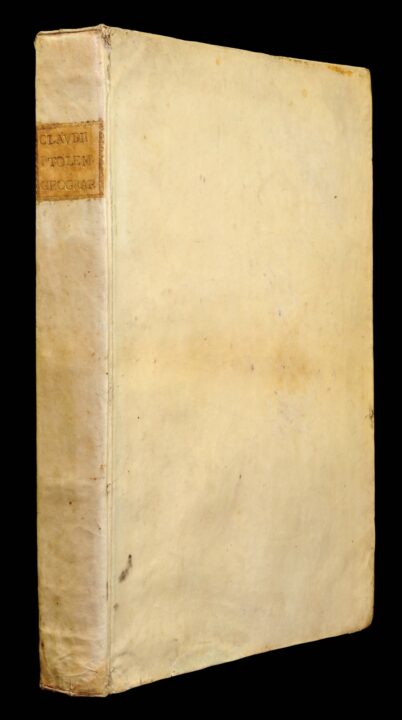 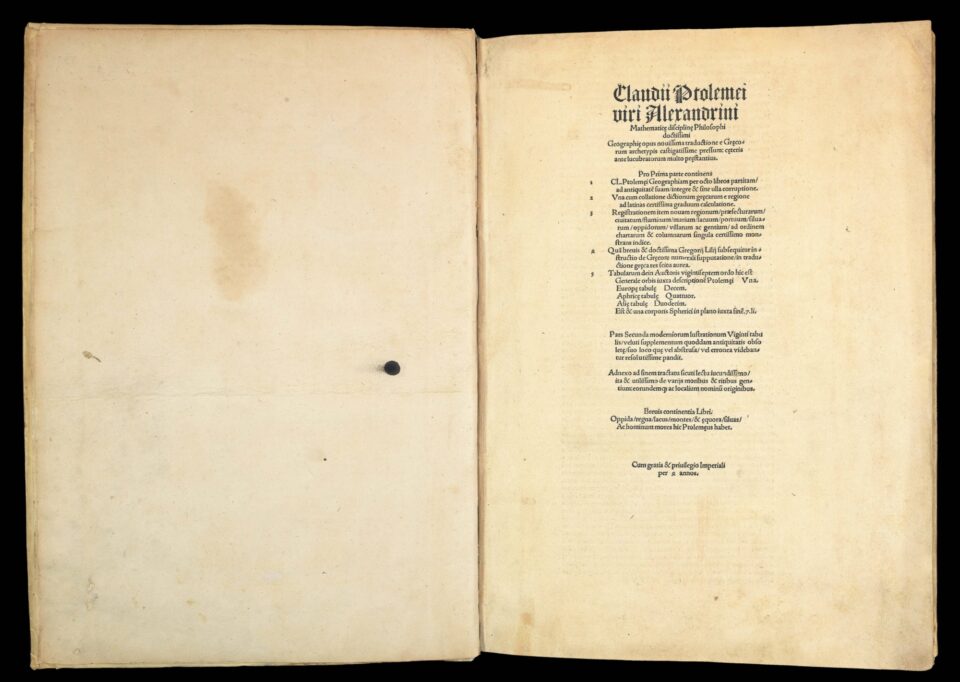 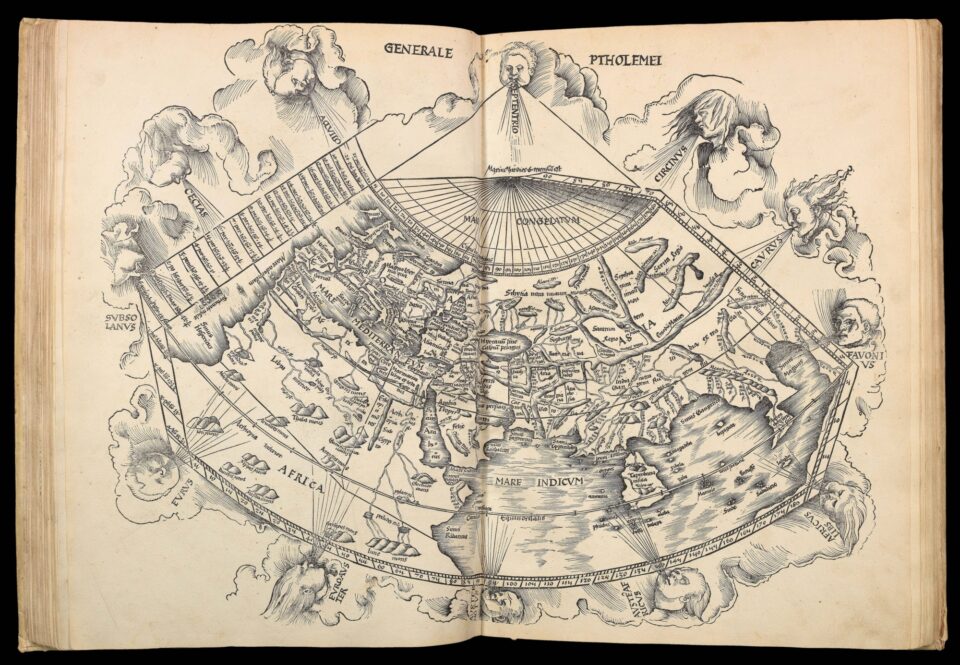 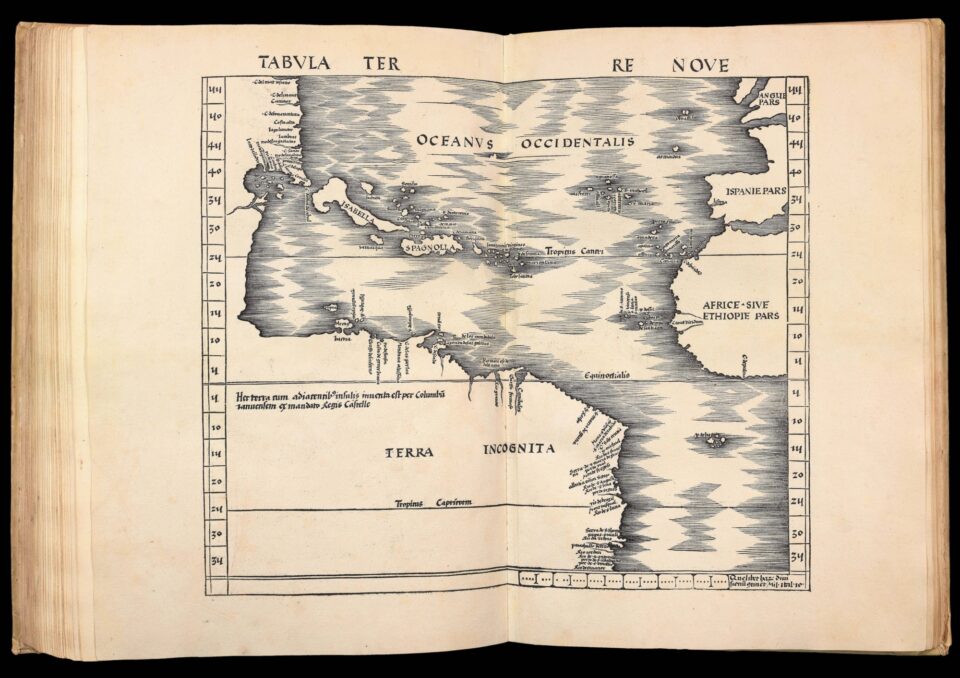