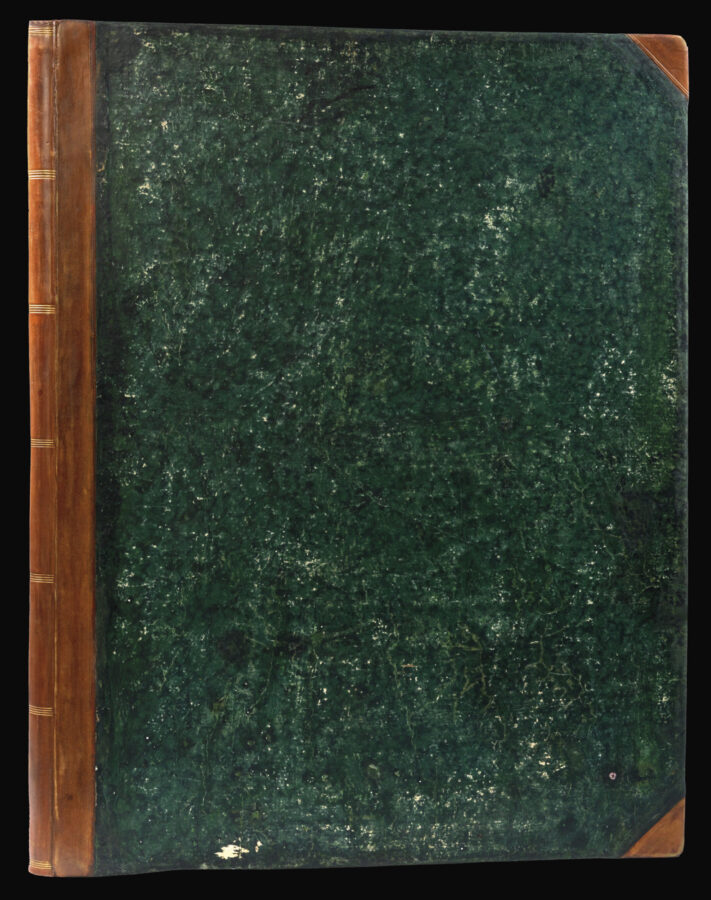 The first World Atlas in the Armenian language

Atlas Ashkharatzoytz Patkeratz [Atlas of Geographical Maps The World According to the Old and New Geographies of France, England, Germany and Russia].

Published by the Mekhitarist monastery on the island of San Lazzaro in Venice, founded in 1717 by a young Benedictine Armenian Catholic priest, Mkhit’ar Sebastats’I (1676–1749), or Mkhitar of Sebastia (Sivas in modern Turkey). The monastery soon became, and remains, a centre for Armenian learning and publishing, together with its sister monastery in Vienna.

The maps are of: the solar system; a double-hemisphere map of the world; the Middle-East and Asia; eastern Europe; Africa; North America; South America; Australia and the Pacific; the Ottoman Empire; and historical Armenian territories.

The publication of this rare atlas was sponsored by Hovhannes Amira Dadian (1798–1869). The Dadians of Constantinople held the important position of barutcubasi, or chief gunpowder makers for the Ottoman army from the end of the eighteenth century. ​“Highly placed, powerful, influential, and very, very rich, the Dadians were among the foremost members of the Amira class (moneyed aristocracy) which dominated the Armenian community of Constantinople (and hence the entire Armenian millet within the Ottoman Empire), until the reforms that took place in the middle of the last century” (Hewsen). Dadian gained favour with Sultan Mahmud II, travelling extensively throughout Europe, and fostering the modernisation and industrialisation of the Empire, founding an iron and steel factory in Zeytinburnu in 1844 and an accompanying technical school to teach the workers their necessary skills. He established a woollen clothing factory in Sliven in Bulgaria, and a broadcloth factory in Izmit in 1842, which later produced silk.

Historically centred on the Armenian Plateau, the collective Armenian states have extended as far as from the south-central Black Sea coast to the Caspian Sea and from the Mediterranean Sea to Lake Urmia in present-day Iran. During its long history, the Armenian borders have changed dramatically as its territories were claimed at various times by Russia, Turkey and Persia. The Armenian diaspora created by this almost constant insurgency, was also fuelled by Armenian mercantile activity, exemplified by Dadian and his contemporaries. Armenians expanded into ​“influential communities further into Asia, even for a short period into India, where, in Calcutta, the first Armenian newspaper was published in 1795. Russian expansionism led to its takeover in 1828 of the Caucasus, consisting of present-day Armenia, Azerbaijan, and Georgia. Armenians started presses in Yerevan and elsewhere in the Russian Empire. As a result of massacres and war, Armenians in the Ottoman Empire were forced to emigrate, and many came to the United States, where the first press was established in 1888” (LoC).

The Library of Congress records the earliest extant geographical study in Armenian to be the seventh-century ​‘Geography’ of Anania Shirakats’I. Scientist, mathematician, and geographer Anania of Shirak’s work includes excerpts from classical sources as well as his own observations.

The Mkhitarist monastery of San Lazzaro also published maps as well as geographical studies, separately or as parts of atlases and geographical narratives, before the publication of this first world atlas. They include Mkhit’ar’ of Sebastia’s own world map, ​‘Universal Geography’, which appeared in his posthumously published ​‘Dictionary of the Armenian Language’ (1749). This influential work was followed in 1804 by Ghukas Vardapet Inchichian’s multi-volume geography.

Rare: records show this is only the second example of this atlas to be sold publicly since 1975; and OCLC records no known institutional examples.

1. Mardiros Balayan, an Armenian cartographer in Cairo the 1920’s, ink library stamps on the front free endpaper and foot of the title-page, some pencilled marginal annotations, by descent to the previous owner. 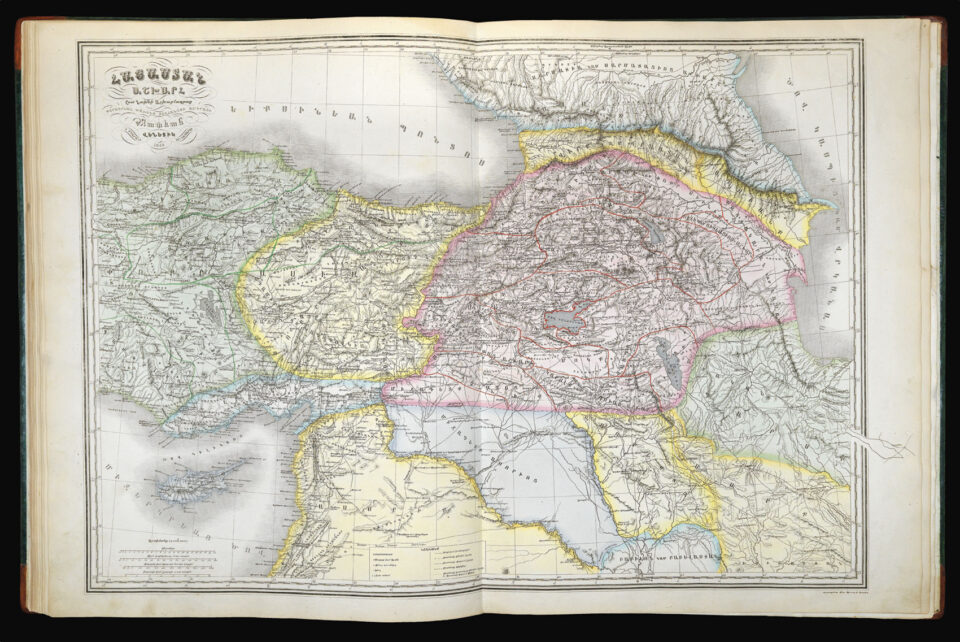 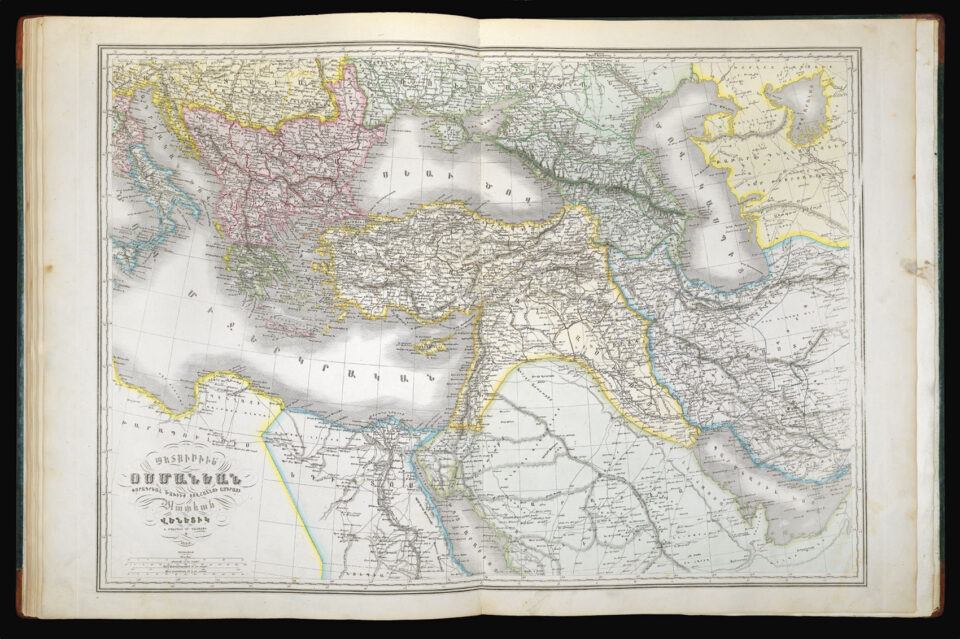 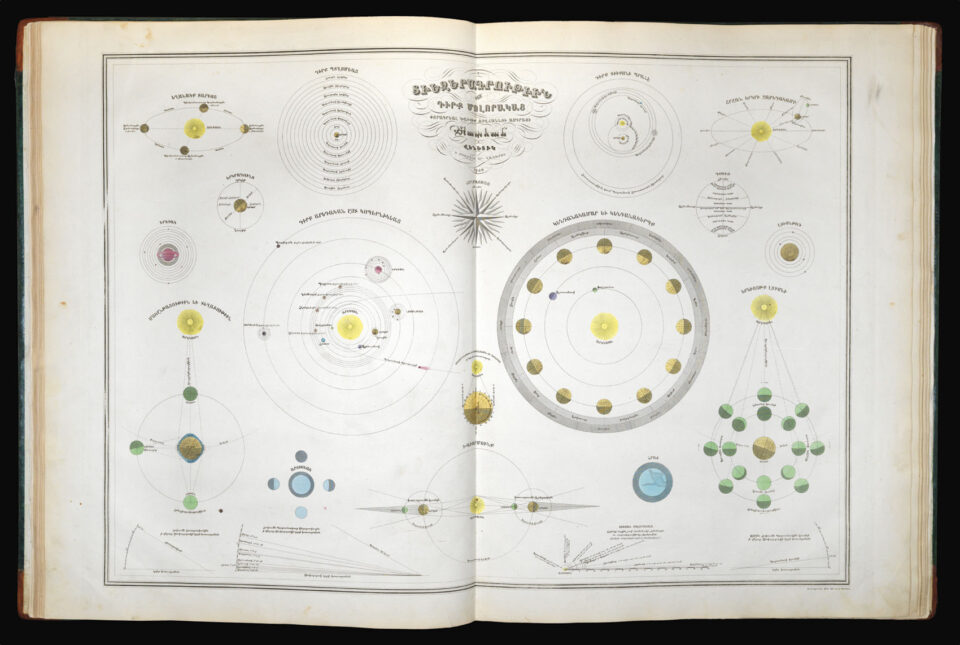 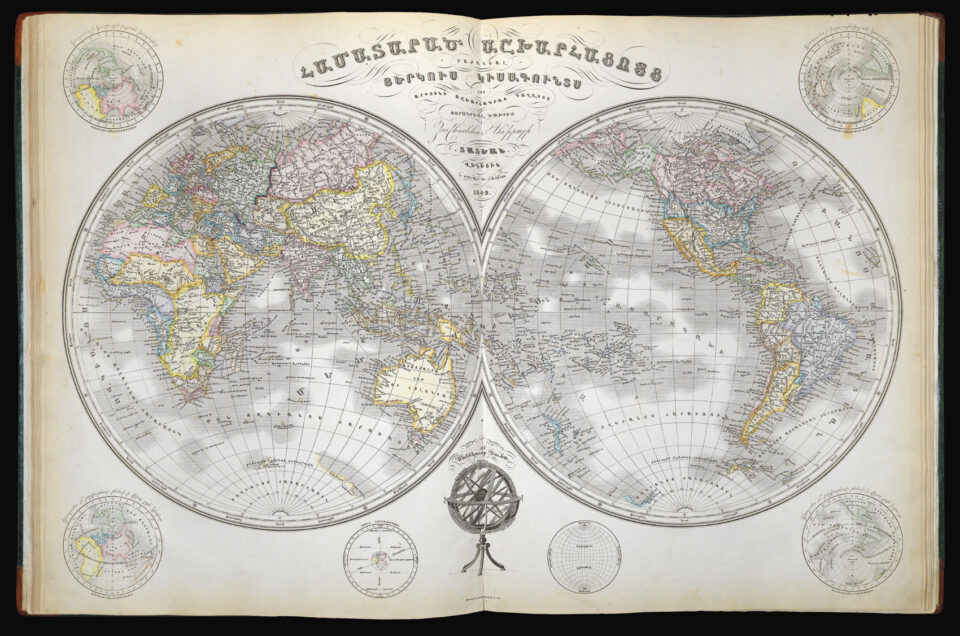 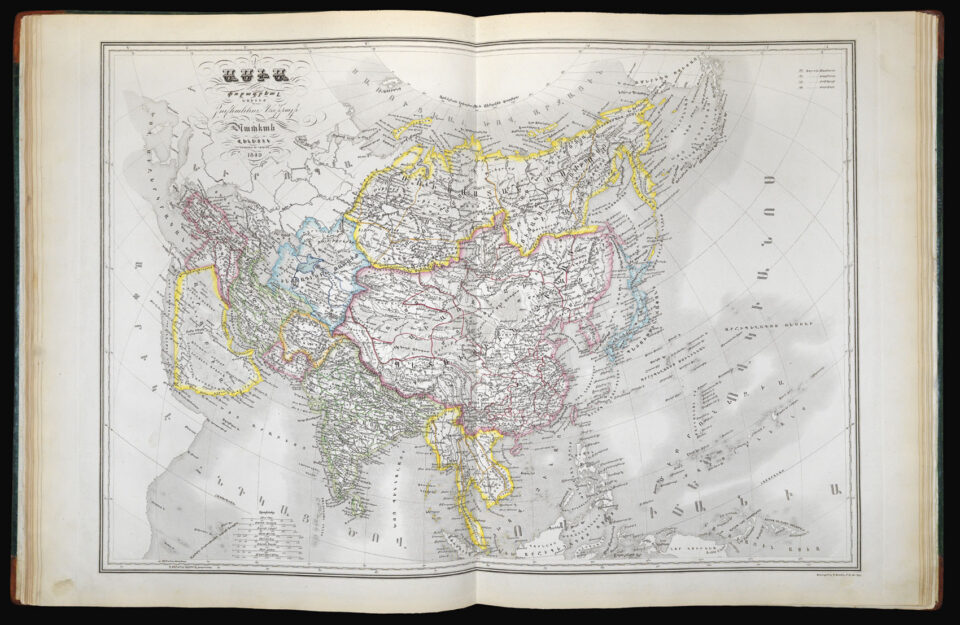 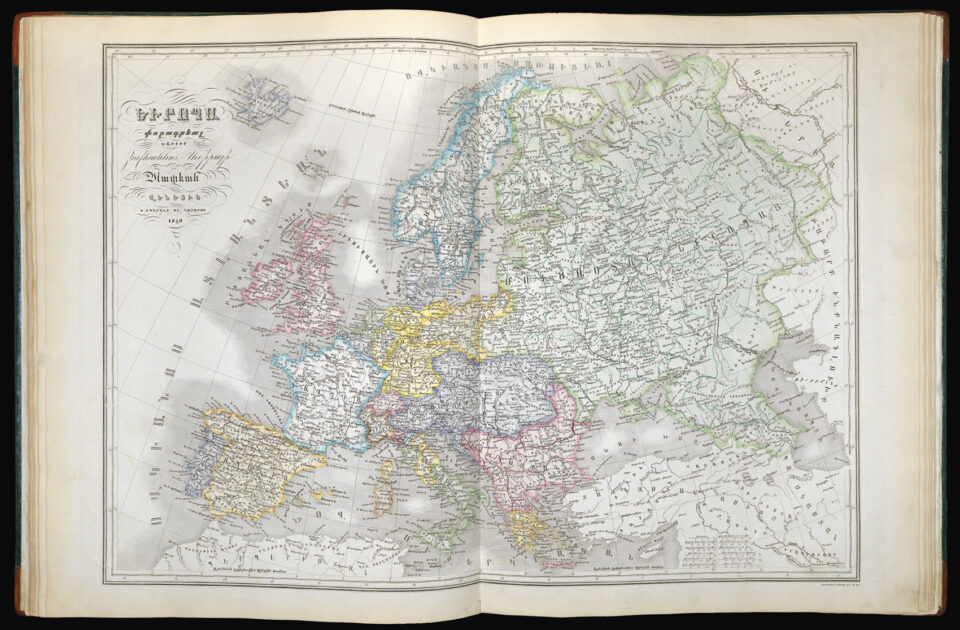 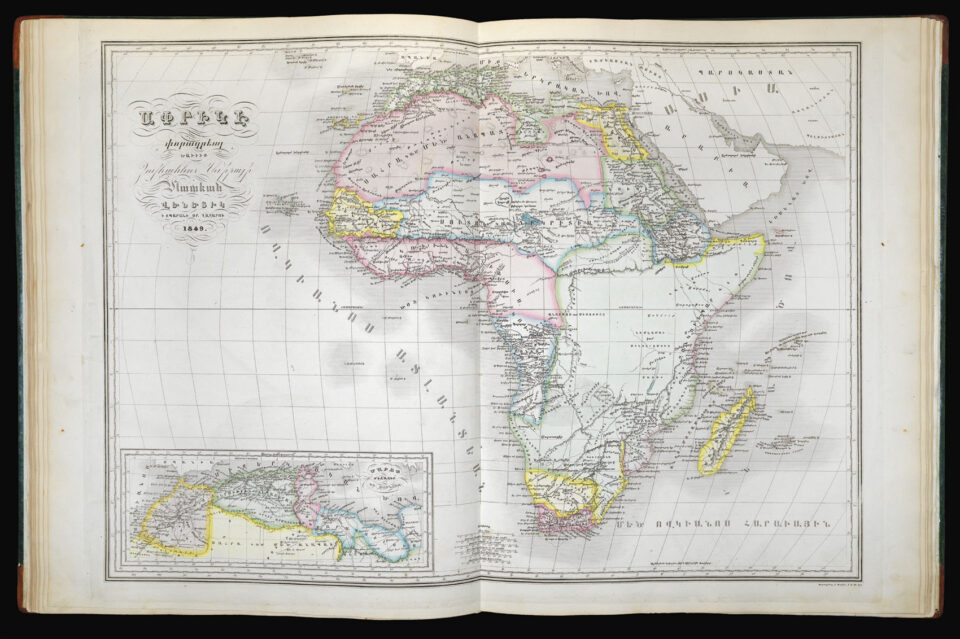 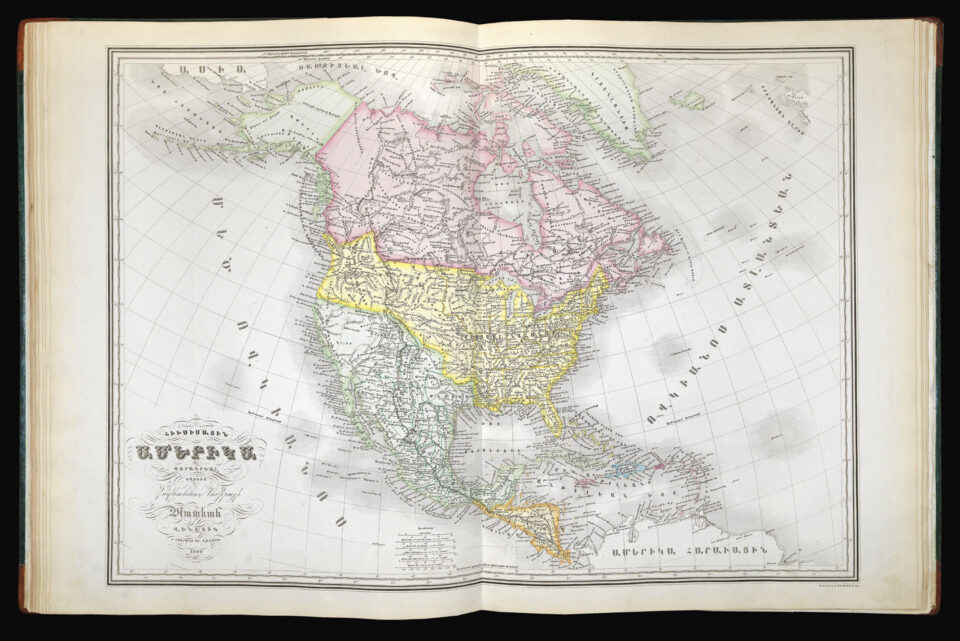 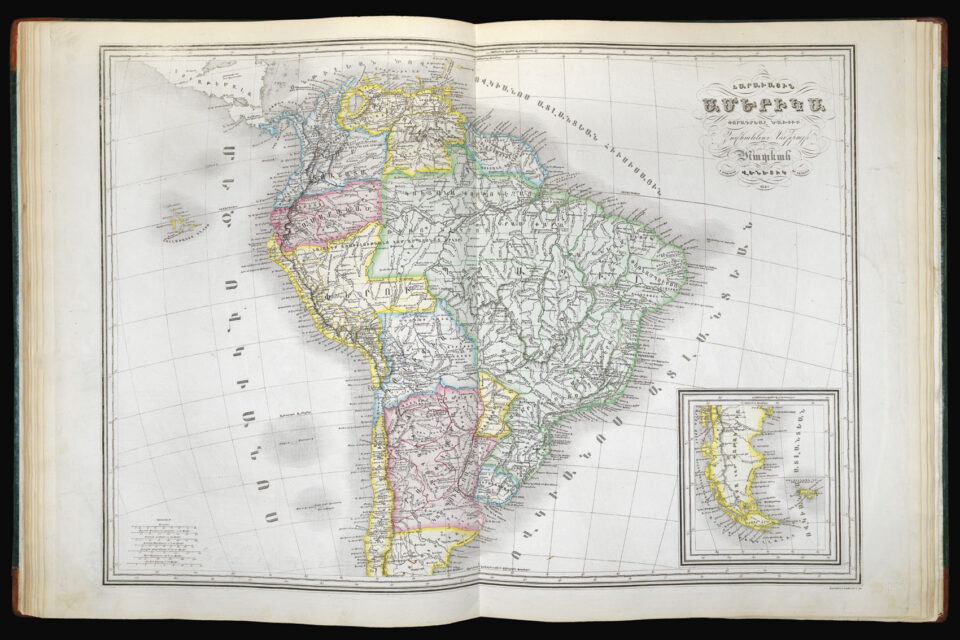 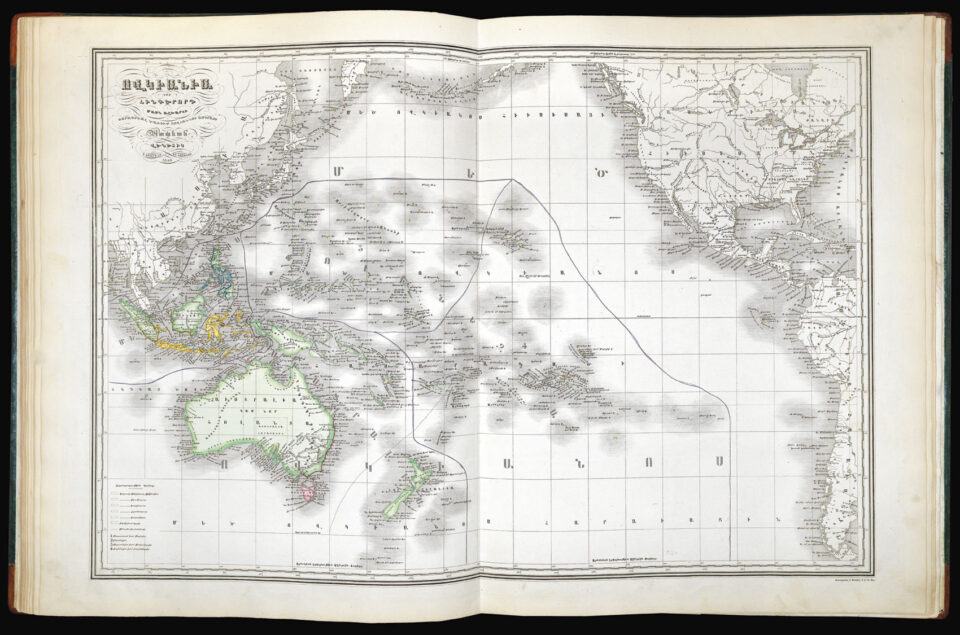