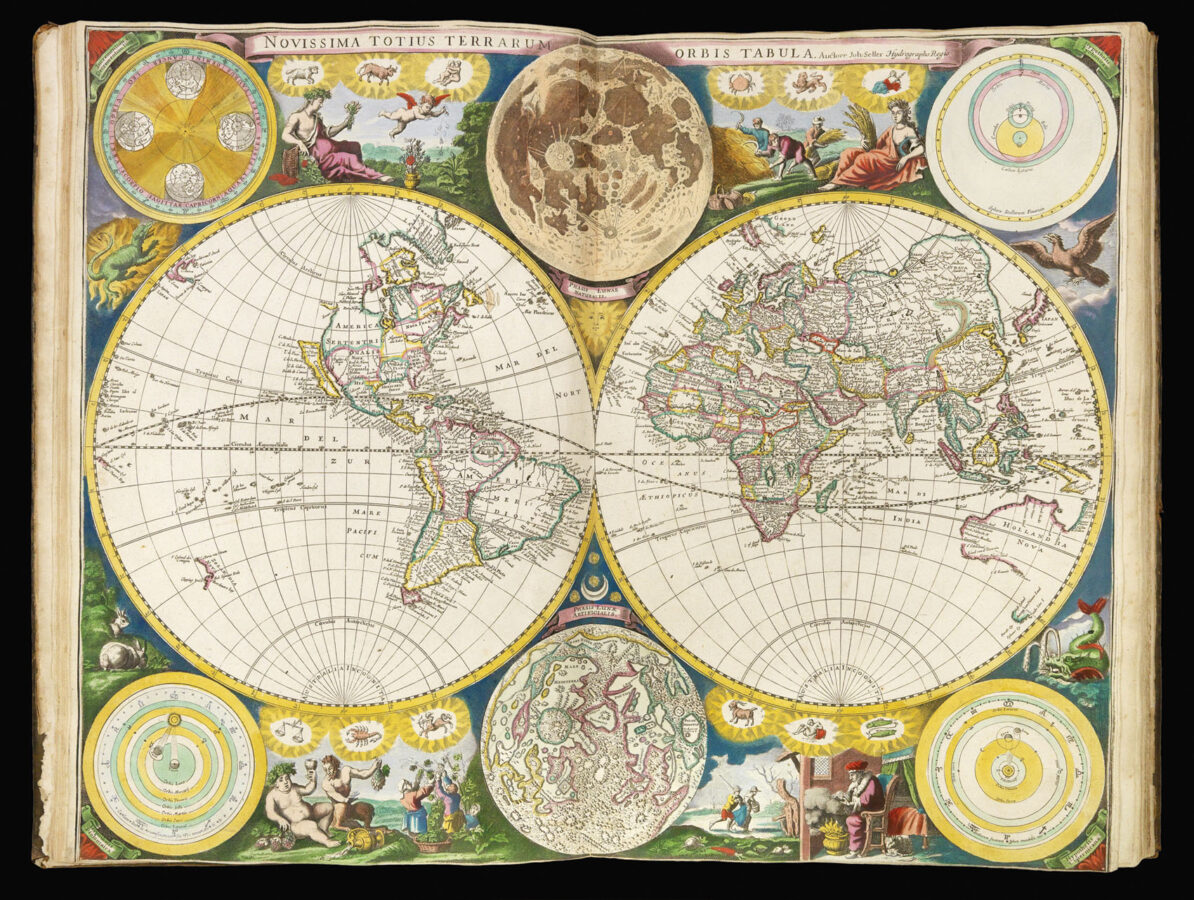 The first sea atlas by an Englishman in England

Atlas Maritimus or a Book of Charts. Describeing the Sea Coasts, Capes, Headlands, Sands… the Bayes, Roads, Harbours, Rivers and Ports in most of the Knowne Parts of the World… Accomodated with an Hydrographicall Description of the Whole World. By John Seller Hydrographer to ye Kings most Excellent Majestie and by William Fischer, John Thornton, John Colson and James Atkinson.

That same year, Seller published his first sea atlas, the ​‘English Pilot: The First Book’, covering the northern navigation. In the following few years, Seller would go on to publish the second, third, and fourth books of the ​‘English Pilot’, covering the Southern, Oriental, and North American navigations; a ​‘Coasting Pilot’ detailing the coasts of Britain and the Low Countries; and a sea atlas, the ​‘Atlas Maritimus’. Although much of their contents were taken from Dutch works by the likes of Goos, Blaeu, and Janssonius, one has to admire Seller’s sheer industry. This industry, however, was not allied with enough business acumen, and by 1677 a consortium of map publishers – most notably William Fisher and John Thornton – had taken over his business. It would seem that the terms of the rescue were quite harsh, as when the consortium broke up in 1679, Fisher kept the publication rights to the ​‘Atlas Maritimus’ and the ​‘English Pilot the Southern Navigation’, and Thornton received some of Seller’s plates.

The ​‘Atlas Maritimus’ of 1675 was the first English attempt to challenge the Dutch monopoly in printed sea atlases by the likes of Goos, Doncker, and Colom. Each was made up according to the wishes of the purchaser, and so individual copies can vary considerably. The present atlas contains 30 maps and charts, and can be dated to around 1677, as 14 bear the imprint of the consortium founded in 1677; three are by John Thornton – [9] ​‘A Chart of England, Scotland and Ireland…’ [14] ​‘The Coast of Barbaria. Gualatta, Argui…’, and [30] ​‘A New Map of Magellan Straights’; with the rest bearing Seller’s name alone. Of the seven charts that depict North America, most are in the second state bearing revisions to nomenclature but still bearing Seller’s imprint alone, before the addition of the names of the consortium.

All the charts are rare and two of particular note. Firstly, ​‘A Chart of the North Coast of America’, which covers Hudson’s Bay, Baffin’s Bay and the North West Passage; although based upon van Loon’s chart published in 1666, the chart shows a great deal of evidence that Seller had access to manuscript material, most probably obtained from his close links with the newly formed Hudson Bay Company, the Company having sent its first Governor, Charles Bayly, to the area in 1670. Labrador and the Ungava Peninsula are named Prince Rupert’s Land, in reference to the Hudson Bay Company holdings, and there are some interesting notations on the west coast of Hudson Bay (here Buttons Bay), noting Hubberts Hope, Hope Checkt and Hope Advanced. Foxe Basin — the entrance to the Northwest Passage — is enticingly marked ​“This far Discovered”.

Secondly, Seller’s arguably most iconic chart: ​‘A General Chart of the West Indies’. The title is borne within an elephant cartouche which covers most of northwest Africa, and is said to have inspired Jonathan Swift’s quatrain about the ignorance of cartographers:

Seller based his chart upon Blaeu’s seminal ​‘West Indische Paskaert’, of c.1630 — the first chart to show the route from Europe to America on Mercator’s projection.

Rare; we are only able to trace two examples of the present atlas, in original colour, coming up for sale in the last 30 years. An example with the same number of charts made £168,000 in the Wardington Sale at Sotheby’s on the 10th October 2006.

Ex libris of Kirkleatham Hall – built by Sir William Turner (1615–1693), one time Lord Mayor of London, and director of the East India Company.

Ownership inscription to title-page reads – ​“Mr H Cholmeley his book left him by his grand father Sir Hu: Cholmeley”. Sir Hugh Cholmeley (1632–1690), a leading politician of his day, was governor of Tangiers between 1670–1672. Upon his death in 1690, having no heir, his estate passed to his sister Margret Cholmeley. Margret had married Charles Turner. It is at this time that the atlas came into the Turner estate. 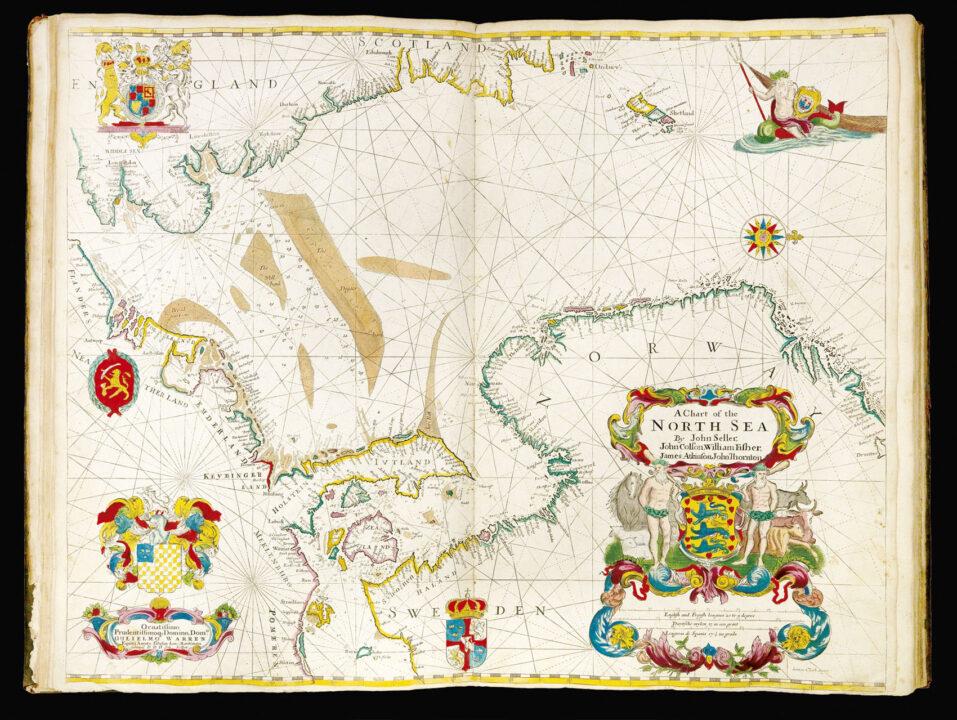 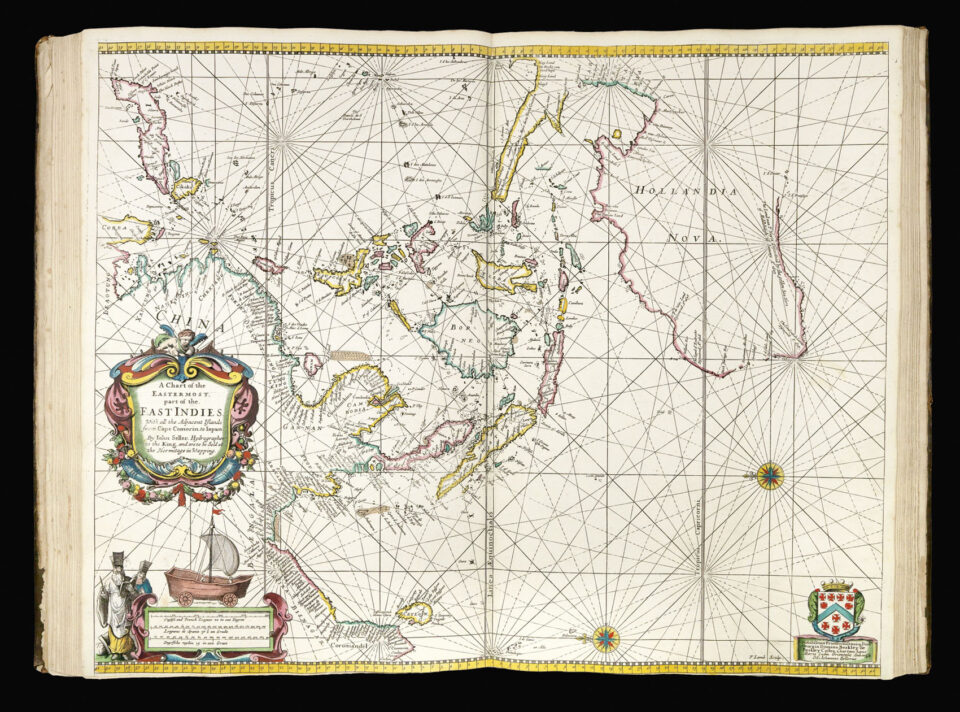 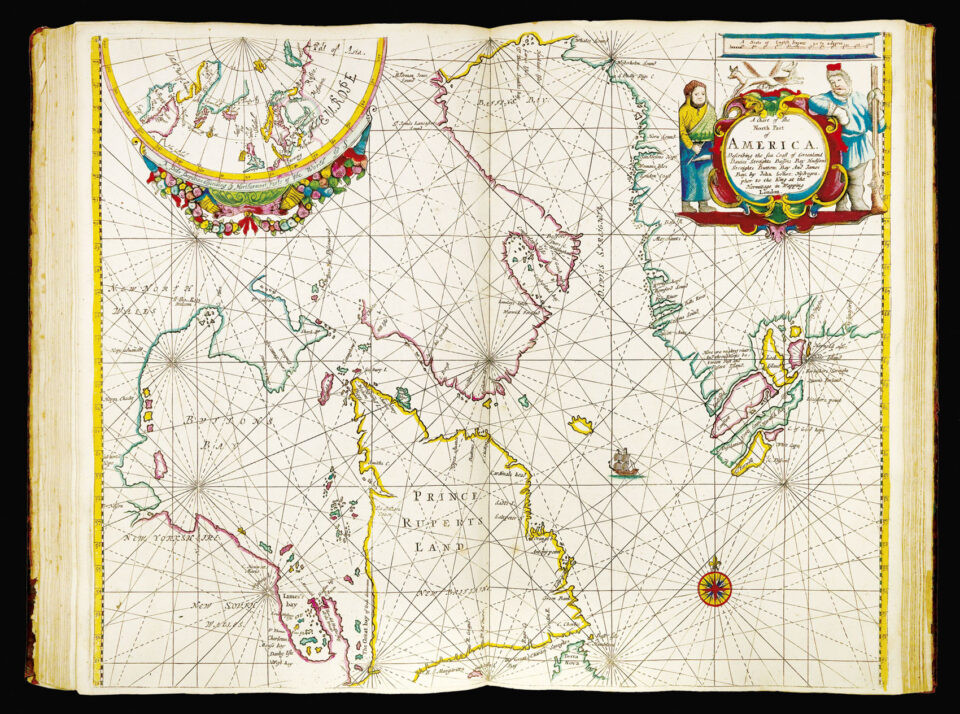 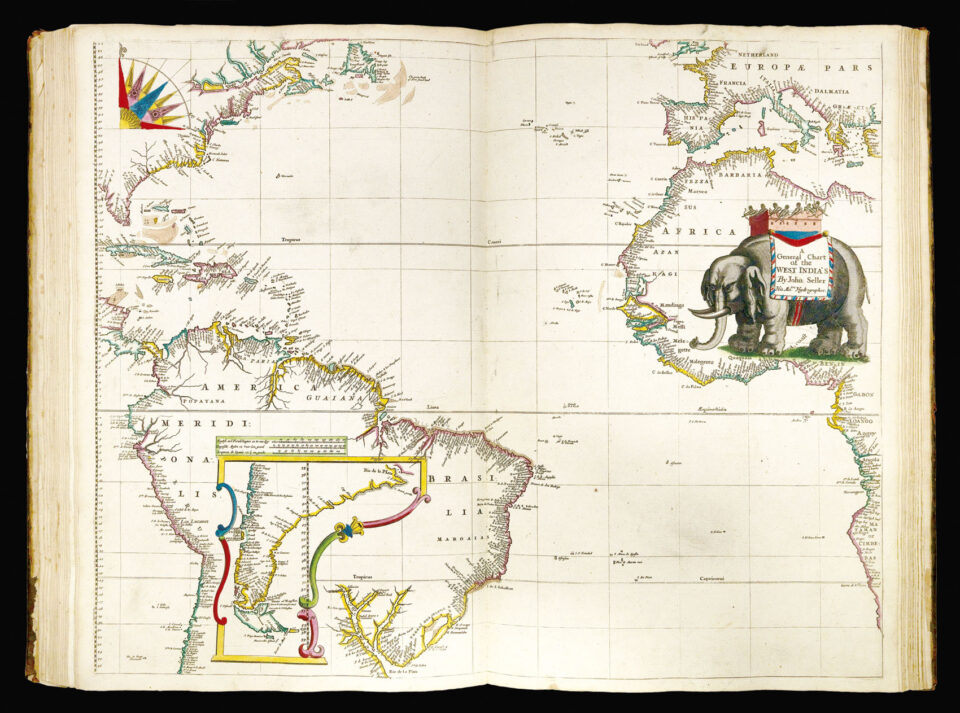 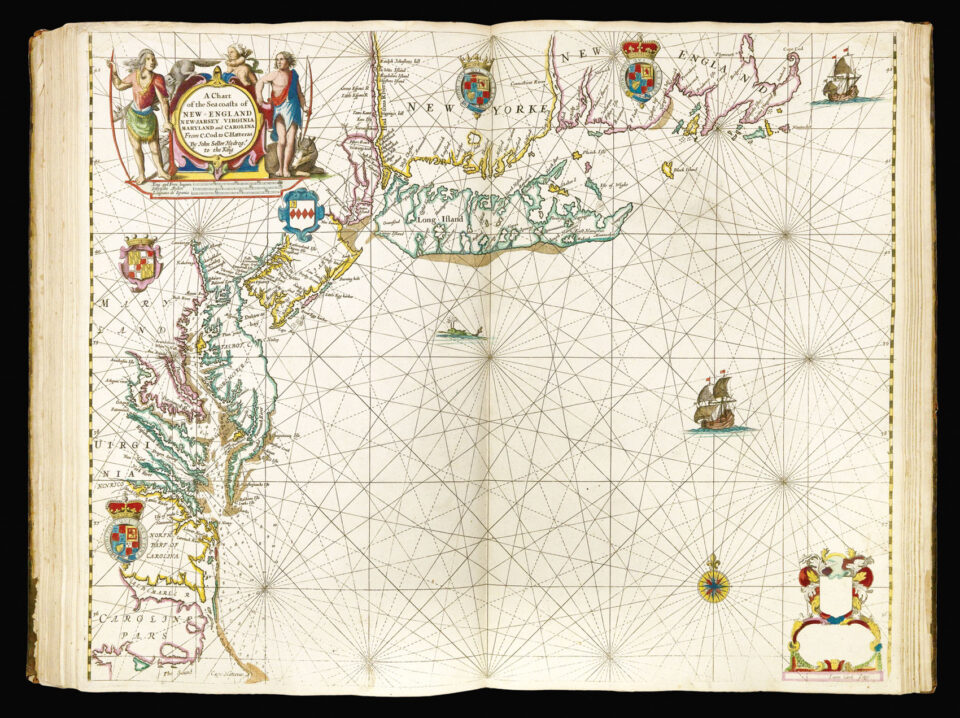 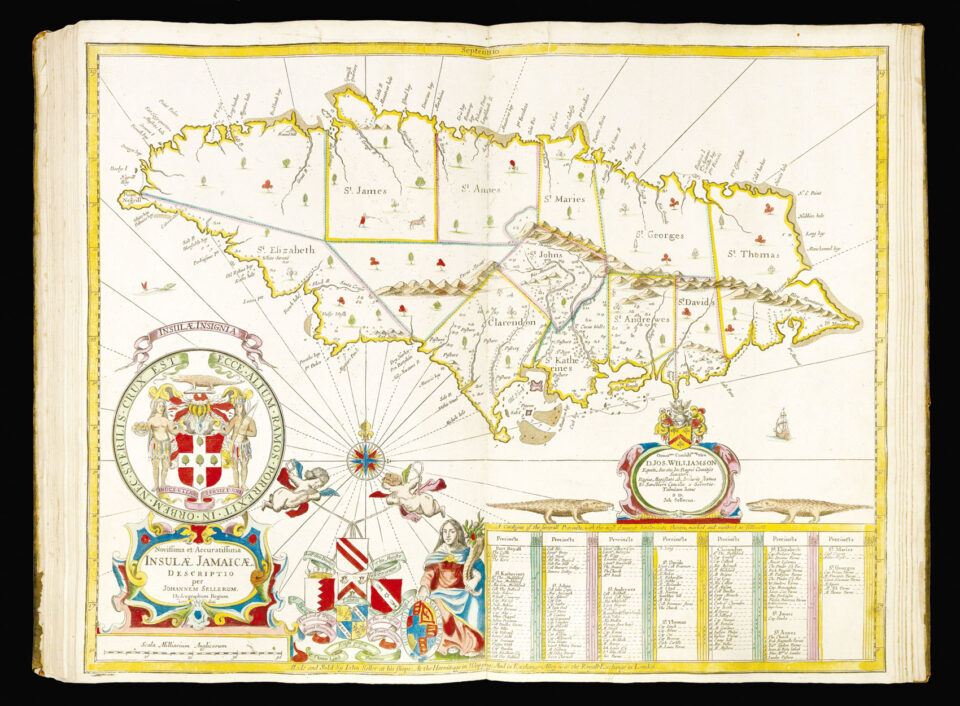 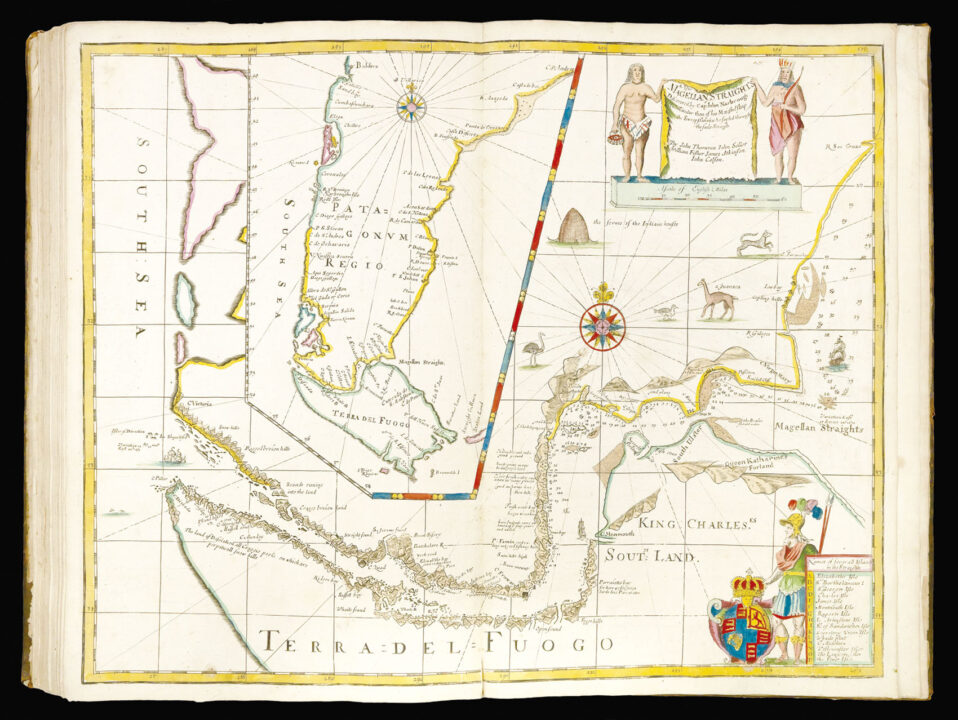