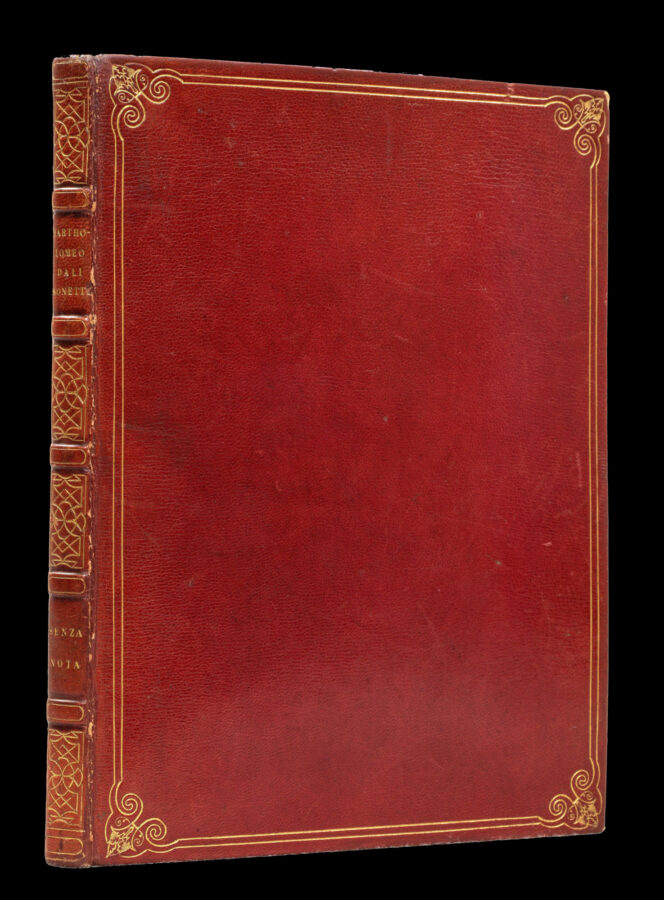 The Bartolomeo dalli Sonetti is the first in a long series of printed Italian island-books, the Isolario provides a detailed survey of the Aegean archipelago. The 49 charts are accompanied by sonnets describing the islands, hence the author’s name ​“dalli Sonnetti” (“of the sonnets”). The appealingly decorative charts clearly derive from the portolan manuscript tradition: each chart is projected on a wind-rose marked with compass bearings, the orientation varying from chart to chart; the accepted navigational symbols of portolans are used; and the undemarcated scale bars accompanying 11 of the charts measure the equivalent of two ​“portolan miles”, according to Nordenskiöld’s calculations. Such conventional similarities would not necessarily contradict the author’s declaration, in his introductory verses (1/​3r), that the maps were based on his own observations, but in fact a manuscript prototype for the Isolario exists, in the island-book of Cristoforo Buondelmonte, composed circa 1420.

The untitled charts are identified in the accompanying sonnets, offering ​“word-pictures” of the islands (Campbell). Still unknown is the identity of ​“Bartolomeo da li sonetti ” as the author coyly calls himself in the preliminary verses (1/​3r), mentioning that he collected his observations as the captain of a ship. Very little is known about Bartolomeo, save what he tells the reader himself in his preface to the work. He was Venetian and served as an officer of triremes in the navy 15 times, and then entered the service of various noble families from the city state. He writes that his naval career means that he has sailed past every island in the Aegean Sea, and he has subsequently compiled this knowledge in his isolario. His personal experience is supplemented by information from the writings of classical authors like Pomponius Mela and Strabo. Two suggested identifications, the mathematician Bartolommeo Zamberti and Bartolommeo de Turco, an associate of Leonardo da Vinci, have been rejected by modern scholars (cf. Campbell, p. 90). Also disguised is the name of the dedicatee, Doge Giovanni Mocenigo, the letters of whose name (“Dvx Zuan Mozenico”) are to be deciphered by substituting roman numerals for the series of number-words in the heading. The Isolario may have been printed after the termination of Mocenigo’s rule on 4 November 1485, but is unlikely to have been printed much earlier.

Guglielmo da Trino (in the Duchy of Monferrat), who called himself ​“Anima Mia” first appears in association with Antonelli di Barasconi in May 1485, in an edition of Thomas Aquinas, printed with Barasconi’s type (Goff T‑238). The earliest recorded edition to appear under Guglielmo’s own imprint is the Paulus Venetus of 11 August 1486 (Goff P‑214). The typeface of the Isolario was apparently only used in two other editions, both of a later date: Simon Genuensis, Clavis sanationis, dated 13 November 1486 (Goff S‑528), and an edition of Duranti printed a year later (Goff D‑432). Taking these facts into account, CIBN’s assignment of this edition to c1486 seems more plausible than ISTC’s ​“not after 1485”. Anima Mia’s press remained active for a decade, producing a total of 32 or 33 known editions, two or three with partners, of a wide range of theological, grammatical, classical and scientific texts, intended for a market of humanist readers and students of theology and medicine. In a number of copies the maps are coloured and have manuscript place names added; as for many early woodcut books this may have been the intention of the publisher. But ​“an alternative explanation would be that Venetian craftsmen were not competent to deal with woodcut lettering. In particular, few would have had experience in cutting the cursive inscriptions needed for maps” (Campbell, p. 91). Like all known copies except the second Morgan Library copy, this one is in the second state, with a total of four additional stanzas added, after printing, to pages 2/​3v, and 3/​4v.

The binding, commissioned by Beckford, who called Charles Lewis ​“the true Angel of binding,” is characteristic of the strikingly forward-looking style, premonitory of art deco forms of the following century, which Lewis developed during his heyday in the 1820s and 1830s. 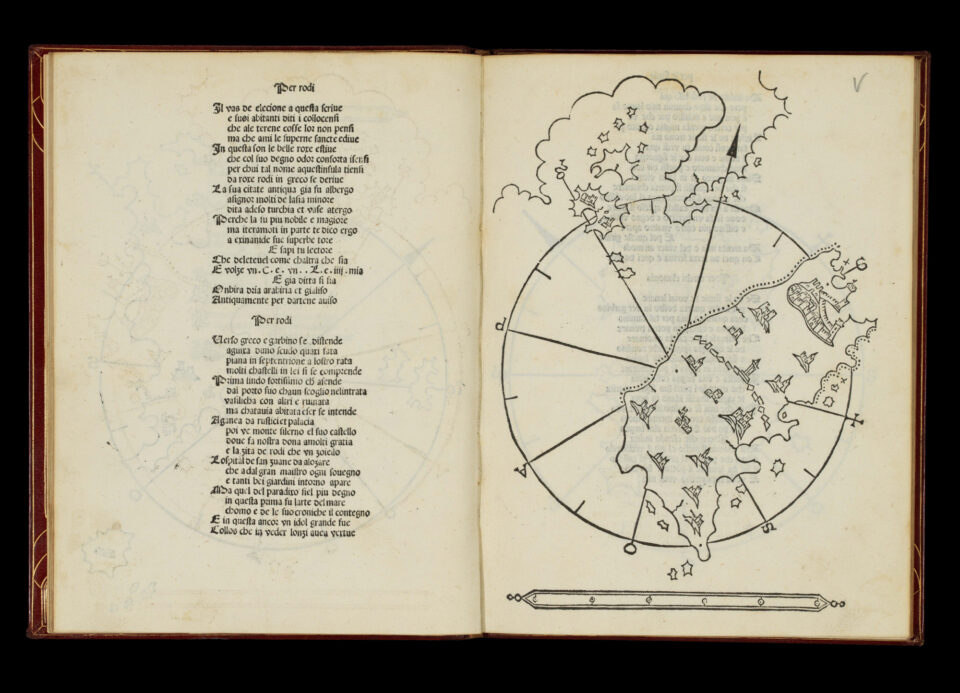 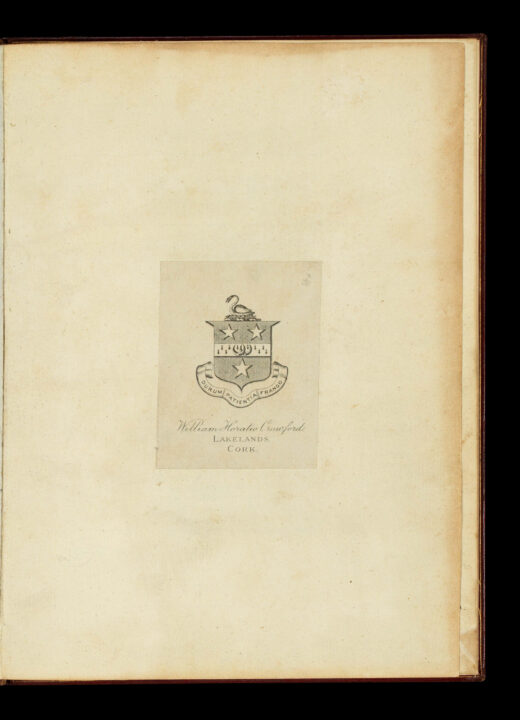 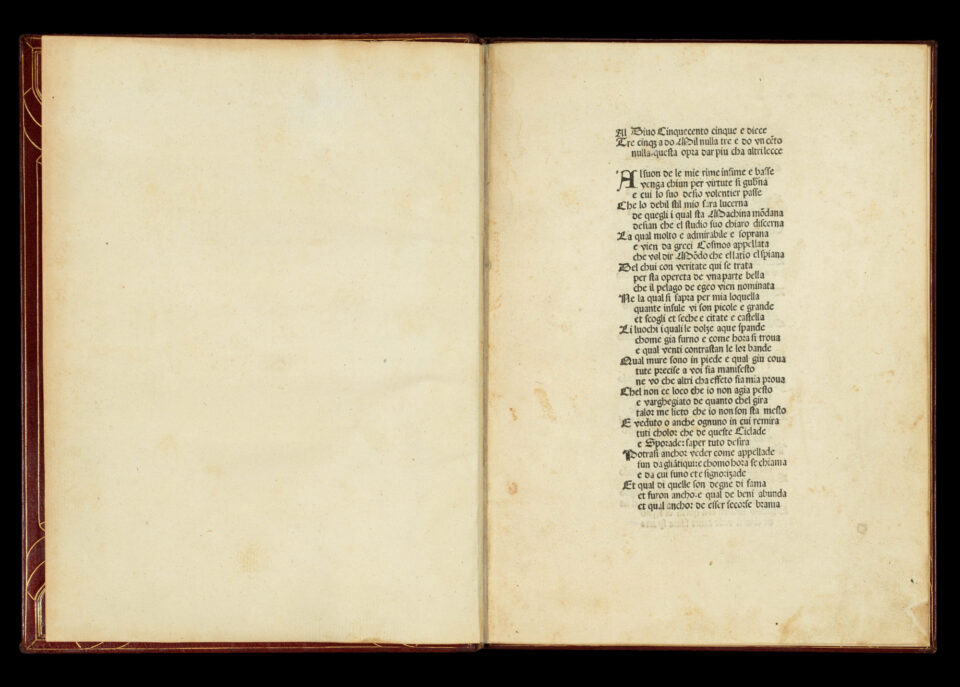 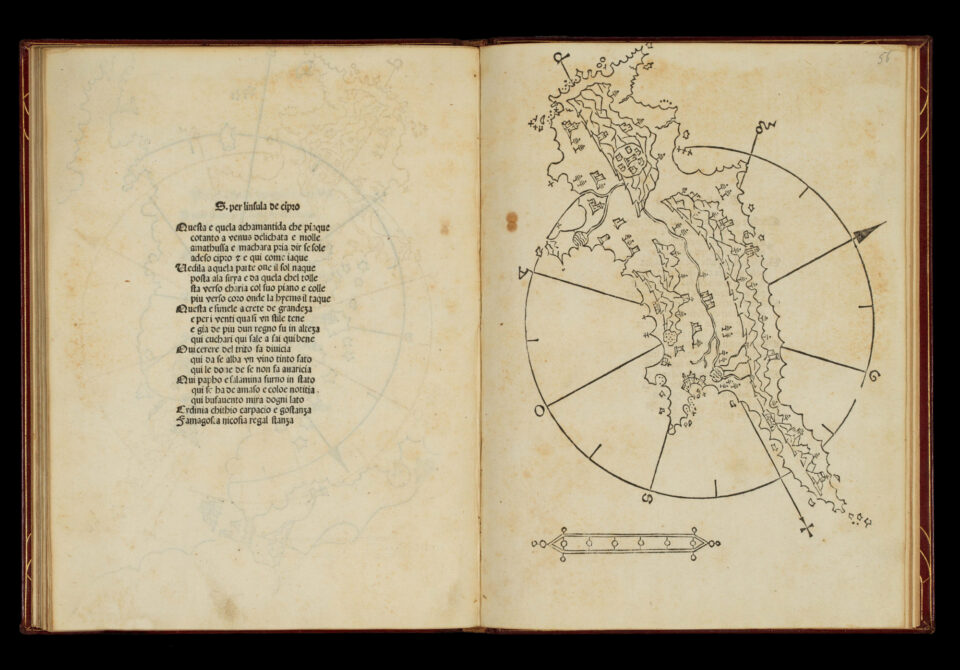 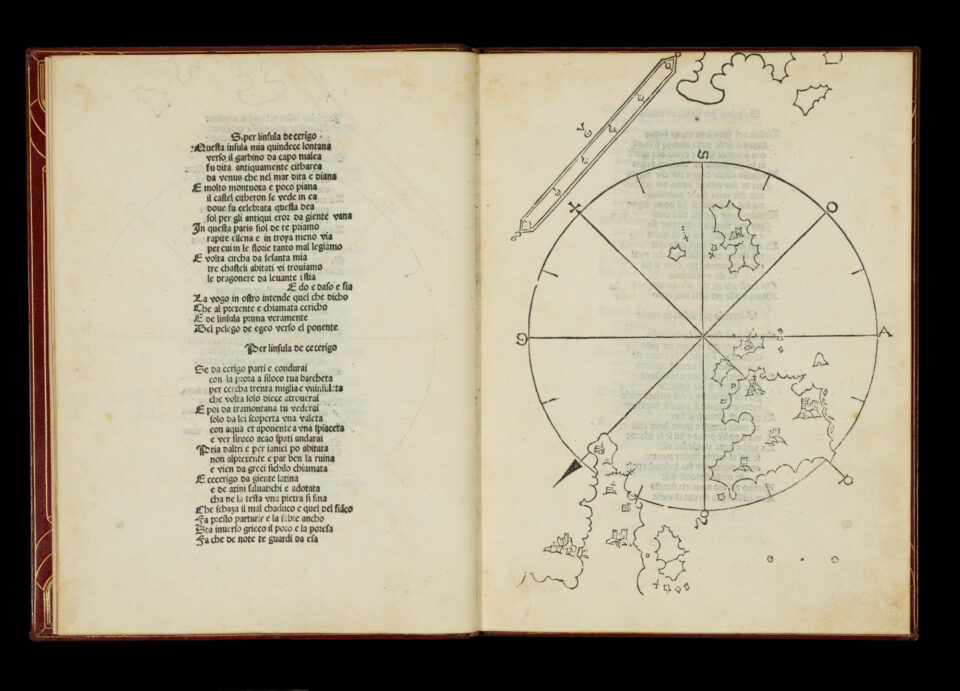 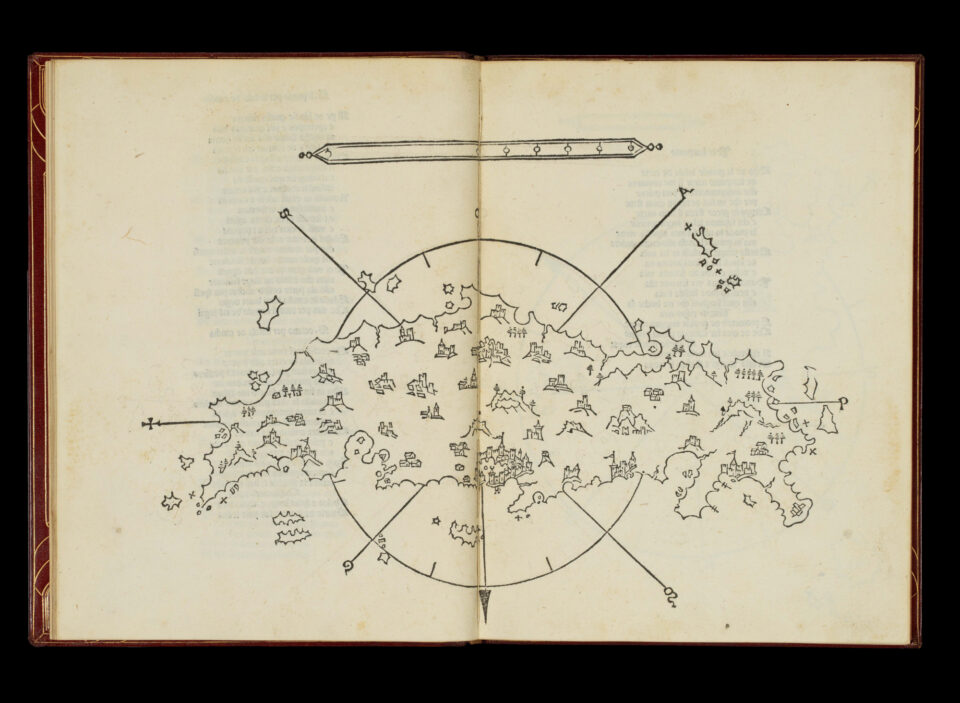