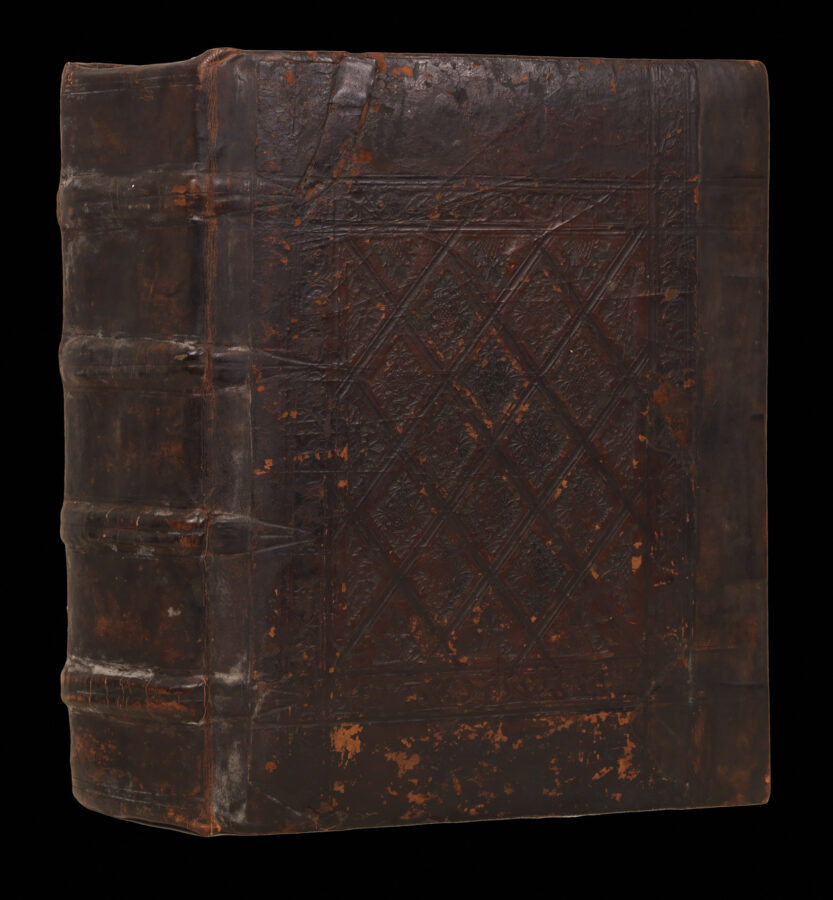 The first chronicle of the world and the first work to contain printed maps that are more than diagrams. It is also the earliest dated Lübeck printing.

Lübeck, the second-largest city in Schleswig-Holstein, was for several centuries the ​“capital” of the Hanseatic League. The Hanseatic League was a commercial and defensive confederation of merchant guilds and their market towns that dominated trade along the coast of Northern Europe. It stretched from the Baltic to the North Sea and inland from the thirteenth to the sixteenth century. The League was created to protect economic interests and diplomatic privileges in the cities and countries and along the trade routes the merchants visited. The Hanseatic cities had their own legal system and furnished their own armies for mutual protection and aid.

The maps of the Rudimentum Novitiorum pre-date the first published atlas, the Bologna Ptolemy, by two years. They are the first ​“to try to show land forms and countries in topographical relation to each other. The world map derives from a Christianised medieval tradition without any reference to either Ptolemaic or portolan sources, and is a vivid piece of cartographical design” (Shirley).

The book was probably conceived and written by a theologian and the title would indicate an educational motivation behind its production. The compilation comprises the six ages of the world, from the creation and the earliest urban development, to the sixth book, which covers the Christian period.

All the pictorial woodcuts and genealogical tables, of which some are employed more than once, were credited to a single author. The different styles, however, suggest two different hands. The printer, Lucas Brandis, is often cited as a possible author, as well as Johannes de Columpna (Giovanni da Colonna), although neither of these suggestions is currently accepted. It is known that the printer, Lucas Brandis, active from 1473/74 in Merseburg, announced the work in a separate advertisement, the only copy of which to have surfaced was purchased in 1955 by Albert Ehrmann.

In the world map, observed locations are represented relatively, but without admitting actual measurement, and are set within a reassuring and suitable array of mythological artifacts. What makes the world map of the Rudimentum so fascinating, and, at the same time, what is so puzzling about it, is the fact that it presents plausible geographical knowledge within ​“the unyielding outlines of the T‑O schema” (Campbell); it is as if the modern, ​‘tangible’ world has been shoe-horned into a circular medieval world view. There are stylised elements that show each continent as an island and each country as a separate hill, surmounted either with a sovereign’s bust or with the conventional symbol for a town separated by imaginary waterways, but these are real places and they are set in (reasonably) accurate relation to one another.

The mythological aspects of the map include illustrations of the phoenix, the Tree of the Sun and the Moon, and the figures of the Devil and the armless man. Traditionally, medieval maps were bounded at the west and east by the Pillars of Hercules and Paradise respectively. The Rudimentum places the pillars astride the entrance to the Mediterranean and shows, at the other extremity, an enclosed mound from which flow the four rivers of Paradise.

It is also worth noting that, next to Sweden (Gothia), ​“Vinland” is named on the world map. This is, however, likely to be Finland, as opposed to a representation of the Viking landings in the New World.

In contrast to the world map, the map of Palestine admits an entirely ​“observed” view by presenting the Holy Land from a bird’s-eye perspective. In doing so, it may be said to be the first modern printed map. It is oriented with east at the top and extends from Damascas and Sion in the north to the Red Sea in the south. Jerusalem is shown as a walled city at the centre of the map, with Calvary nearby. Eight heads around the periphery represent the winds or compass directions. As with the world map, each town or country is represented as a hillock bounded by either walls or waterways. Nebenzahl suggests the map originates from an account of the Holy Land by Burchardus de Monte Sion from Magdeburg, who spent ten years there in the thirteenth century. Copies of the account exist in manuscript but, to date, none of these has been discovered with an accompanying map. However, leaves 164–188 of the Rudimentum include a version of his travels in Armenia, Palestine and Egypt that demonstrates a considerable knowledge of his work; including the fact that he measured the stones of the Pyramids of Gizeh in order to give the exact size!

The curious maps, between them, stand as a bridge between the medieval and the modern worlds, presented in the renaissance world’s new medium of print. 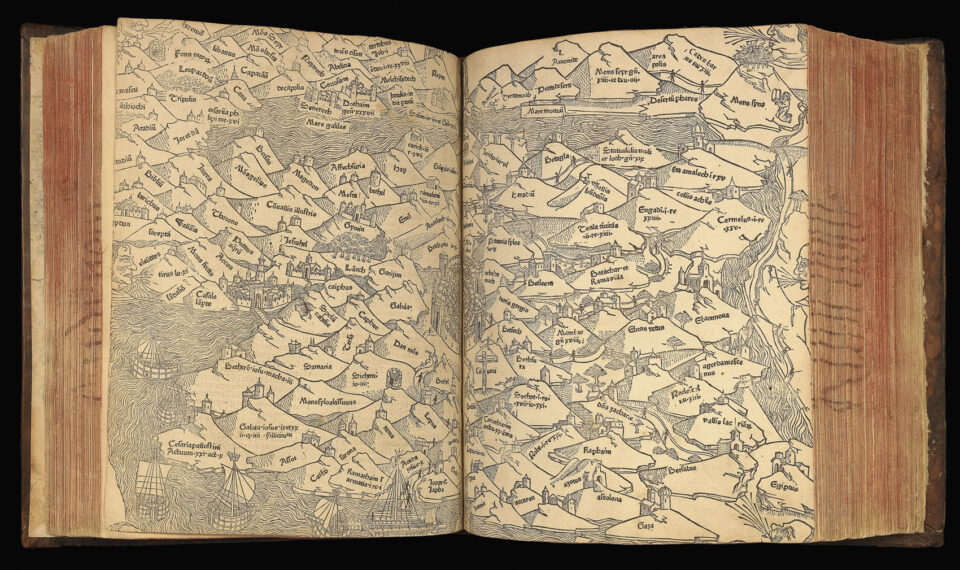 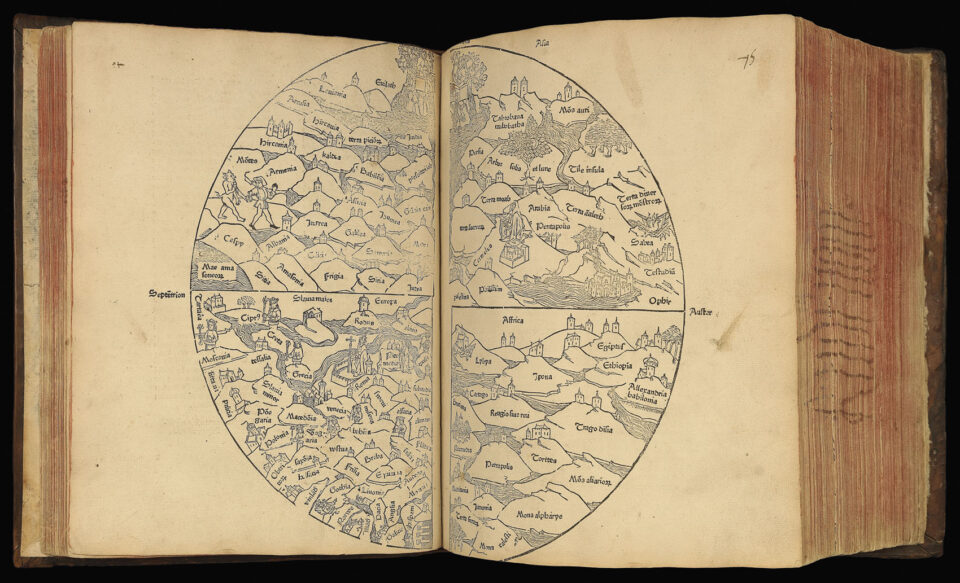 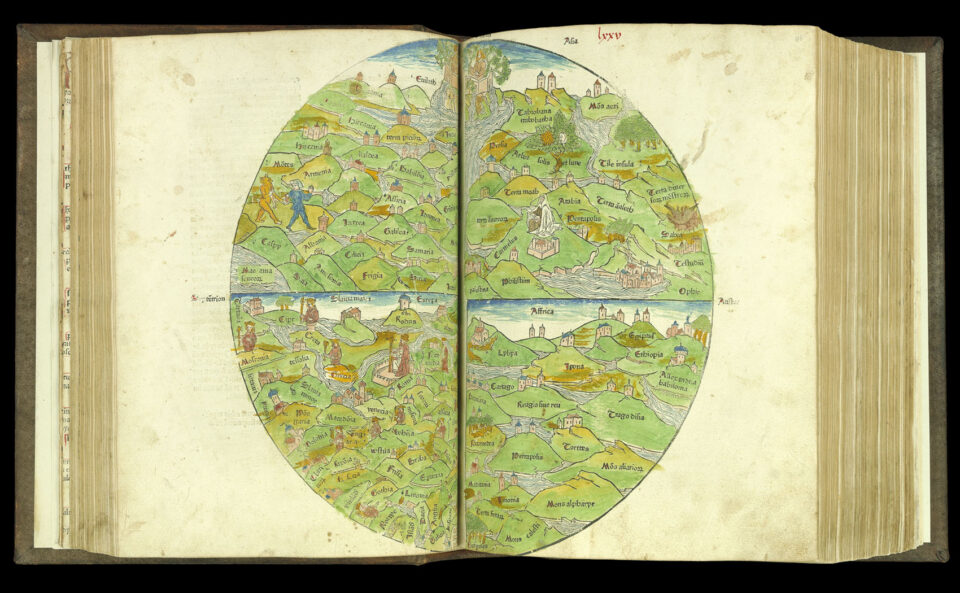