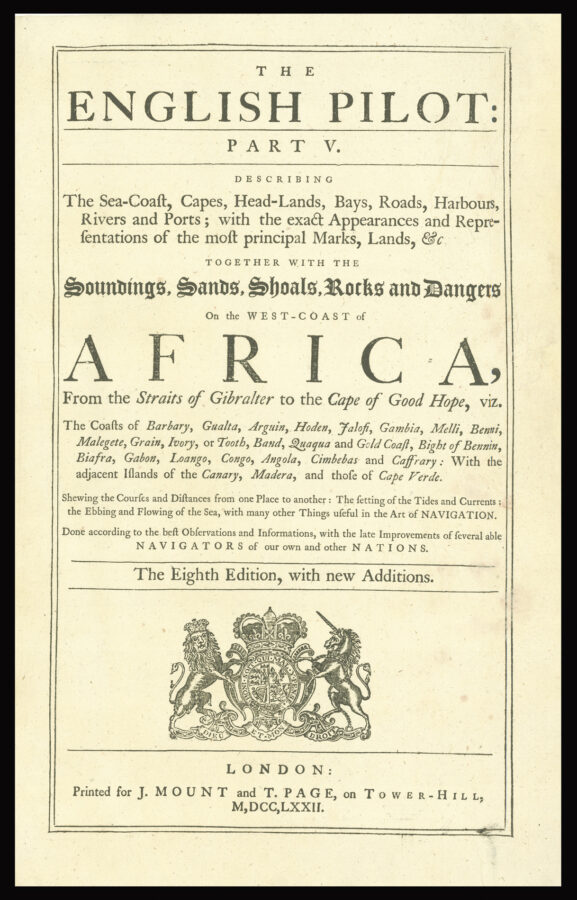 By SELLER, Jeremiah; and Charles PRICE, 1772

The English Pilot: Part V. Describing the Sea-Coast, Capes, Head-Lands, Bays, Roads, Harbours, Rivers and Ports; with the Exact Appearances and Representations of the most principal Marks, Lands, &c. together with the Soundings, Sands, Shoals, Rocks and Dangers on the coast of Africa… The Eighth Edition with new Additions.

The great ​‘English Pilot’ project had been started by John Seller in 1671. However, Seller’s financial troubles precluded only publication of the first three parts (Northern, Southern, and Oriental) and it was not until four years after his death, in 1701, that the African or fifth part of the English Pilot was published.

The present Pilot was the work of John Seller’s son Jeremiah Seller, and Charles Price. The first edition contained 15 charts, 12 off which were drawn by Charles Price, with three by the late John Seller. Although the charts were based largely (often copied) from Dutch material, it still constituted the first English marine atlas devoted solely to Africa. Unfortunately, the partnership was not a success, and after the firms loss of the lucrative Naval contract in 1705, they were declared bankrupt in 1707. The works text and plates were brought by the publisher’s Richard Mount and Thomas Page. To confuse matters, John Thornton published a rival edition in 1706. Thornton was part of the consortium that had overseen the publication of the first three parts, and his position as hydrographer to the East India Company meant he had a ready supply of charts of the African coast. Following the death of John Thorton’s son Samuel in 1715, his stock was acquired by Mount and Page.

Mount and Page would issue a new edition in 1716, which amalgamated the Seller, and Thornton charts and would continue to issue the pilot with a minimum amount revision to the charts and text until 1780.

The present work is eight edition published by the firm in 1772. Of the 21 charts 14 are by Jeremiah and Charles Price; three after after Smith and engraved by Grey; one by John Thornton; two by Samuel Thornton, and one by Mount and Page. All but the chart by Mount and Page have had their imprint removed.

We are unable to trace any institutional examples of the present edition. 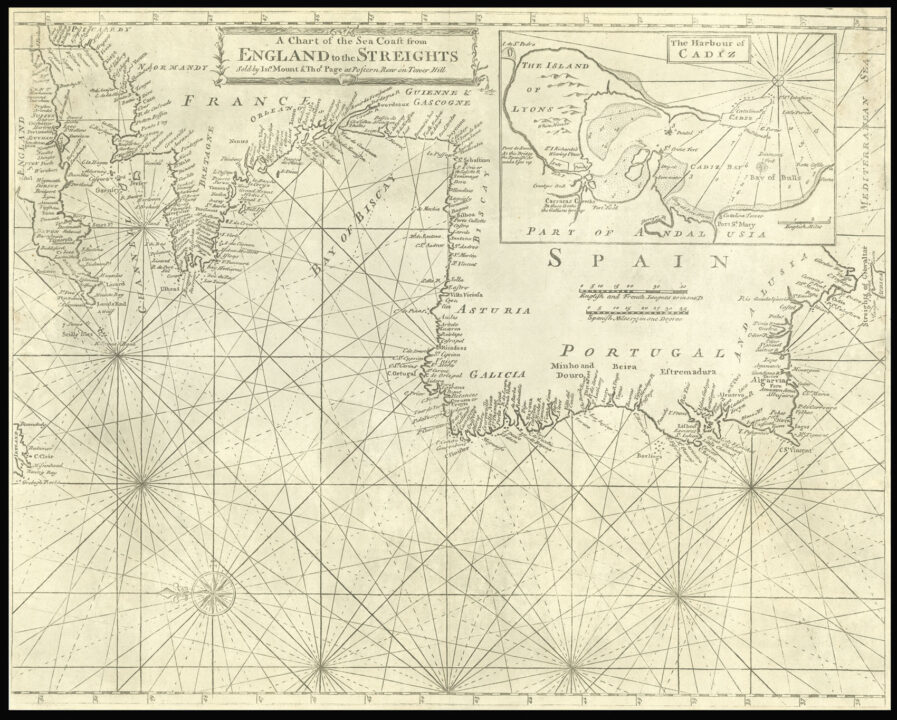