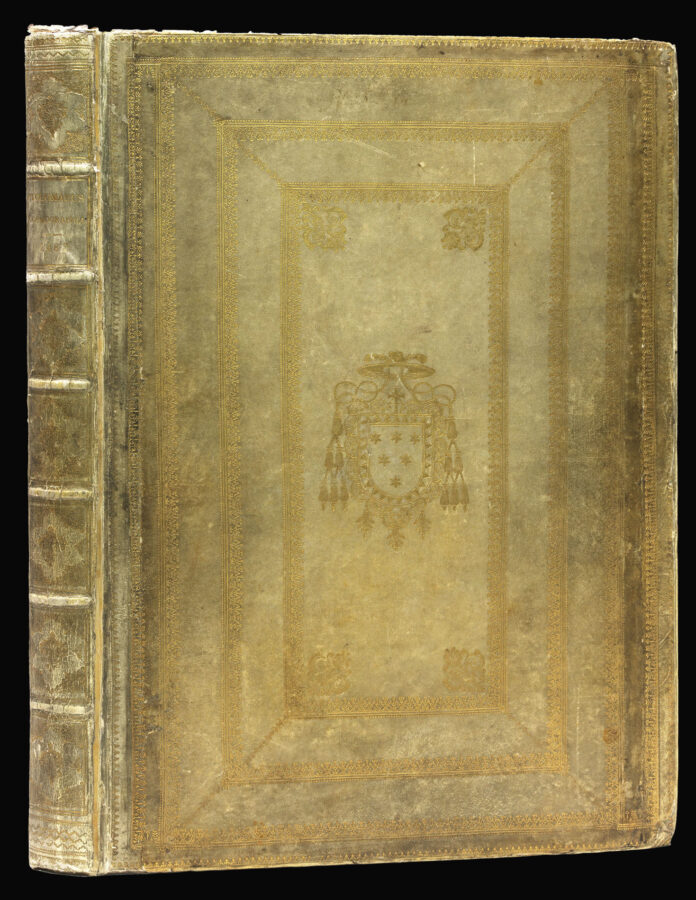 The text of Claudius Ptolemaeus’ ​‘Cosmographia’ (also known as the ​‘Geographia’) was translated into Latin from the original Greek by Jacobus Angelus and was first published in Vicenza (1475), Bologna (1477) and Rome (1478). The sumptuous edition published at Ulm in 1482, however, far surpassed all earlier efforts and remains one of the most important publications in the history of cartography. This is the first redaction of the ​‘Cosmographia’ to be printed outside of Italy; the earliest atlas printed in Germany; the first to be illustrated with woodcuts rather than engravings; the first to contain hand-coloured maps, the design and execution of which were ascribed to a named cartographer; and the first to update classical geography. The Ulm edition departed from the classical prototype by expanding the atlas to reflect discoveries about the size and shape of the earth. To the canonical 27 Ptolemaic maps were added five new maps of Spain, France, Italy, the Holy Land and northern Europe.

The world map is of particular interest as it is the first map to be signed by the engraver. It was made by Johannes Schnitzer of Armsheim, who has inadvertently provided two Tropics of Cancer. This map is the first to be based on Ptolemy’s second projection, in which both parallels and meridians are shown curved to convey the sphericity of the earth. Schnitzer updated the Ptolemaic world picture by incorporating improvements that were probably based on a 1470s manuscript by Nicolaus Germanus, a Benedictine monk of Reichenbach Abbey in Bavaria, who is depicted in the first illuminated letter of the atlas presenting his book to the dedicatee, Pope Paul II. One notable addition is a rudimentary depiction of Scandinavia to the north, within an extension of the map’s top border. This is also the earliest printed map to show the northernmost reaches of the Atlantic Ocean.

Though printed outside Italy, the paper of the atlas was imported from Italy, and payment made in part by complete copies of the finished atlas. It is therefore not surprising that many copies known have an early Italian provenance: including this copy, which is from the library of Pietro dal Verme, probably the Count dal Verme di Sanguinetto, Lord of Vigevano, and general of Milan under, and son-in-law to, Galeazza Maria Sforza, Duke of Milan from 1466 to his assassination in 1476. Dal Verme himself was assassinated in 1485, and his estates were confiscated by the new regent of Milan, Ludovico il Moro. The dispersal of dal Verme’s possessions probably accounts for the subsequent possession of the atlas by Emilio Lorenzo Altieri (1590–1676), who made cardinal in 1669 by the dying Pope Clement IX, and elected Pope Clement X in 1670.

Claudius Ptolemy was a Greek astronomer and geographer, whose work was revived during the Renaissance and became the basis of western geography. The ​‘Cosmographia’ demonstrated how the globe could be projected on a plane surface, provided coordinates for over 8,000 places across the Roman world, and expressed them in degrees of longitude and latitude.

1. Contemporary ownership inscription of Pietro dal Verme (?d.1485) at the head of the first page of text. 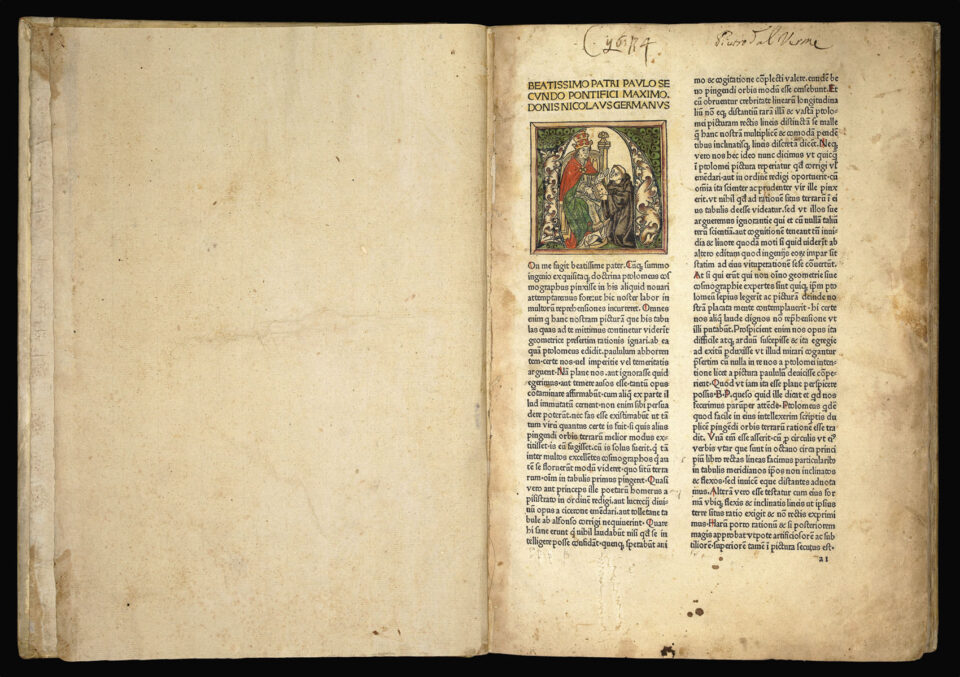 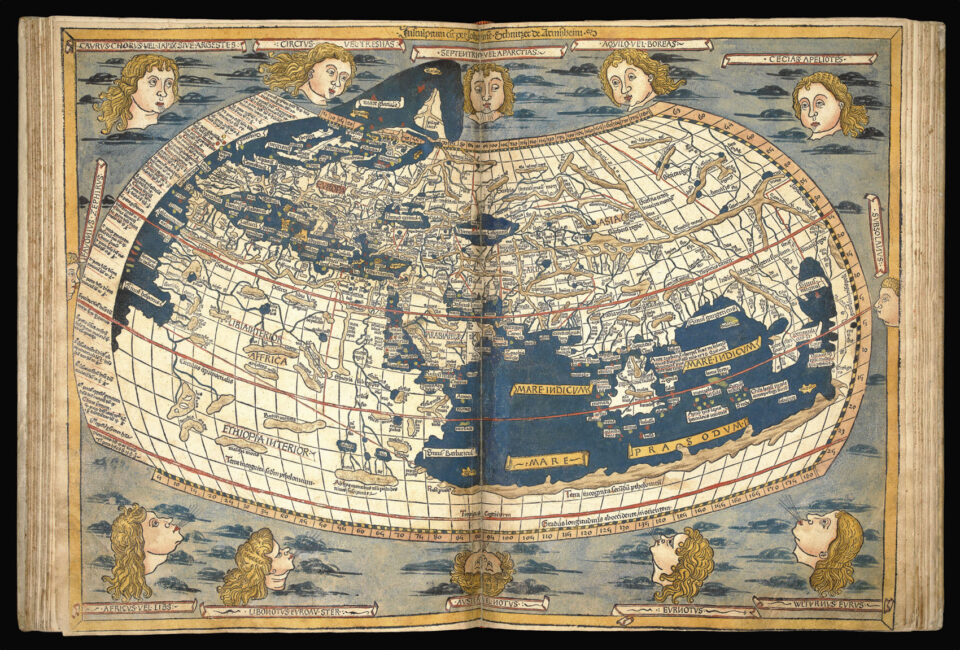 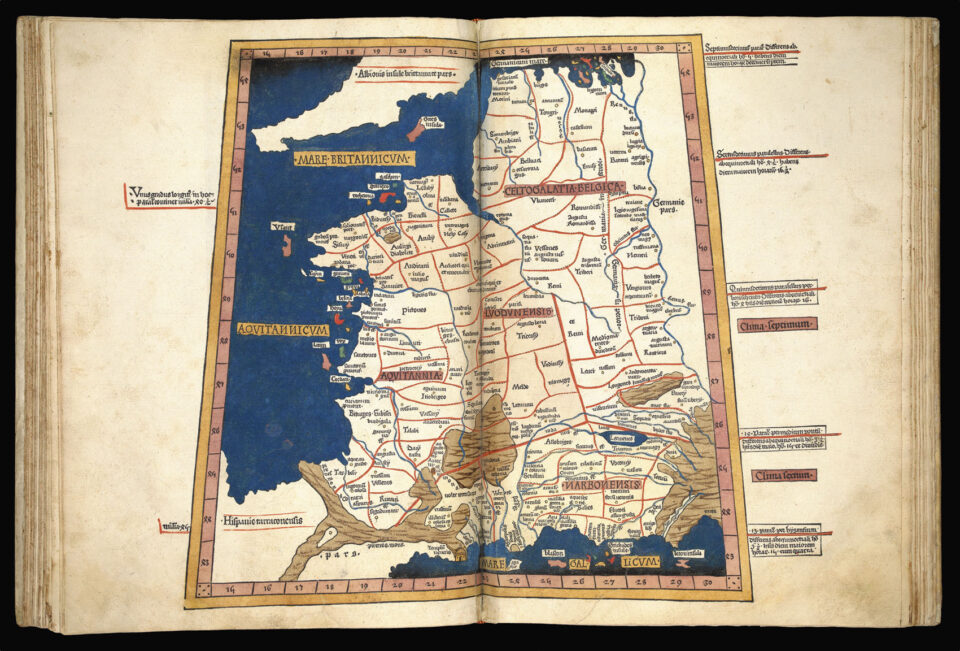 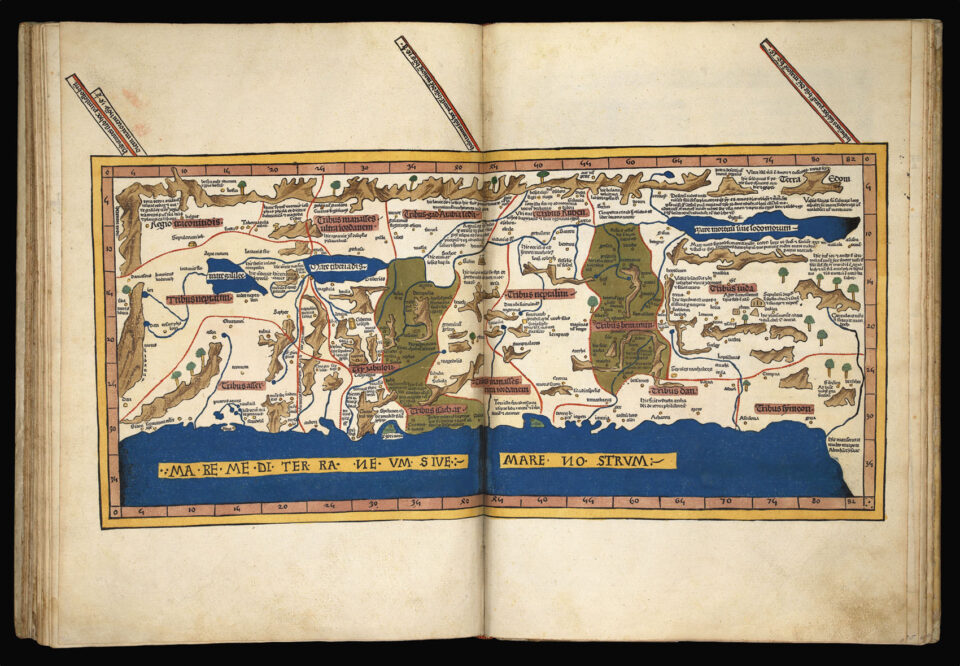