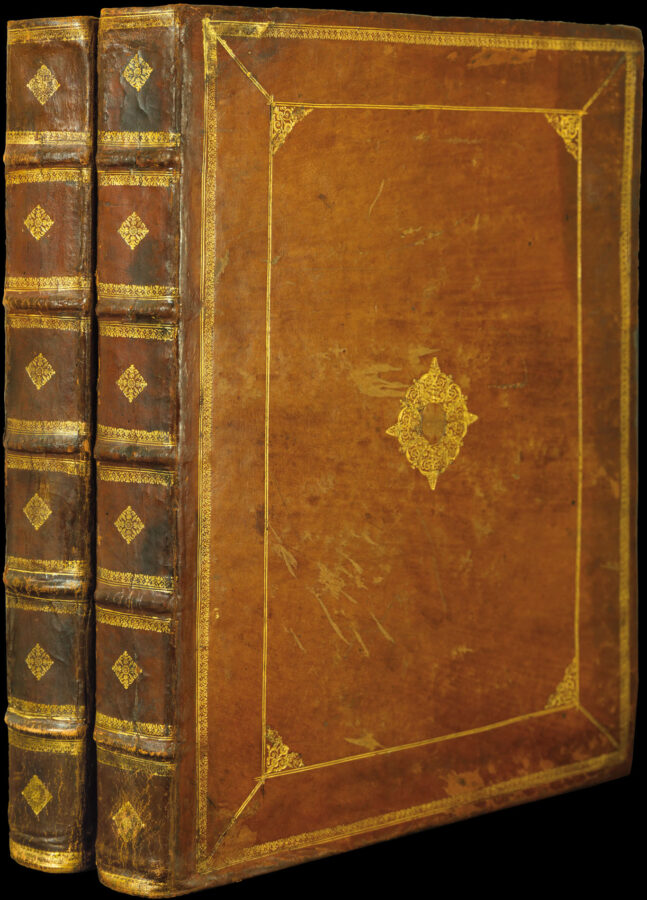 The first atlas on Mercator’s Projection

The ​‘Arcano de Mare’ is one the ​“greatest atlases of the world” (Wardington).

This sumptuous atlas, first published in 1646 when its author, Robert Dudley, was 73, was not only the first sea atlas of the world, but also the first to use Mercator’s projection; the earliest to show magnetic deviation; the first to show currents and prevailing winds; the first to expound the advantages of ​‘Great Circle Sailing’ – the shortest distance between two points on a globe; and ​“perhaps less importantly the first sea-atlas to be compiled by an Englishman, all be it abroad in Italy” (Wardington)

Robert Dudley (1573–1649) was the son of the Earl of Leicester (the one time favourite of Elizabeth I) and Lady Douglas Sheffield, the widow of Lord Sheffield. Although born out of wedlock, Robert received the education and privileges of a Tudor nobleman. He seems to have been interested in naval matters from an early age, and in 1594, at the age of 21, he led an expedition to the Orinoco River and Guiana. He would later, like all good Tudor seamen, sack Cadiz, an achievement for which he was knighted.

His success upon the high-seas was not matched, unfortunately, by his luck at court, and at the beginning of the seventeenth century he was forced to flee, along with his cousin Elizabeth Southwell, to Europe. Eventually he ended up in Florence at the court of Grand Duke Ferdinand I of Tuscany, where he not only married his cousin and converted to Catholicism, but also help Ferdinand wage war against the Mediterranean pirates. In his spare time he set about his great life’s work: the ​‘Arcano del Mare’.

The atlas is divided into six books, or sections: book one deals with longitude; book two covers errors in the then-existing sea charts, and includes the portolano for the Mediterranean and 15 general maps; book three deals with naval and military discipline, notably the former, and there is a long section on naval tactics, especially remarkable for a plan of the construction of a navy in five grades of vessel; book four describes the method of designing and building ships of the ​“Galerato” and ​“Galizaba” types and is concerned with naval architecture, giving the lines and dimensions of ships; book five is devoted entirely to navigation and methods of measuring the sun’s declination and the relative positions of the stars; book six contains the sea atlas.

For the beautifully engraved charts, Dudley employed the services of Antonio Francesco Lucini. Lucini states in the atlases that the work took him 12 years to complete and required 5,000lbs of copper. The charts are by English and other pilots, and it is generally accepted that the work was both scientific and accurate for the time. It is assumed that Dudley used the original charts of Henry Hudson, and for the Pacific Coast of America used his brother in-law Thomas Cavendish’s observations. Rare. The last example to come on the market sold for $824,000 in the Frank Streeter sale (Christies New York, 16/5/07).

Collation:
Volume I
— Book 1. [4], [2], 30pp., printed title with plate of a navigational instrument, engraved facsimile of the Patent, 30 engravings on 27 sheets, 22 of which have moveable volvelles.
— Book 2. 24pp., 15 engravings on nine sheets, five of which have volvelles and 15 large (six double-page or folding) engraved charts, four relating to America, five of the European coasts, four of Asia, and two of Africa, a few maps evenly age-toned.
— Book 3. 25pp., eight engraved plates on six sheets (three plates being of ships in battle formation, etc.) and four sheets with plates of fortifications and cities with walled defences.
— Book 4. 12pp., 18 engravings on 14 sheets (of which seven are double-page and one has a volvelle) all designs of ships in plan and in section.
— Book 5. 26, [2]pp., 145 engravings on 89 sheets, 38 have moveable volvelles.
Volume II
— Book 6. [4], 41pp., title with plate of the great bear, 131 engraved charts (82 double-page), 58 covering Europe, Greenland, and Canada, 17 of Africa, 23 of Asia, and 33 of America. 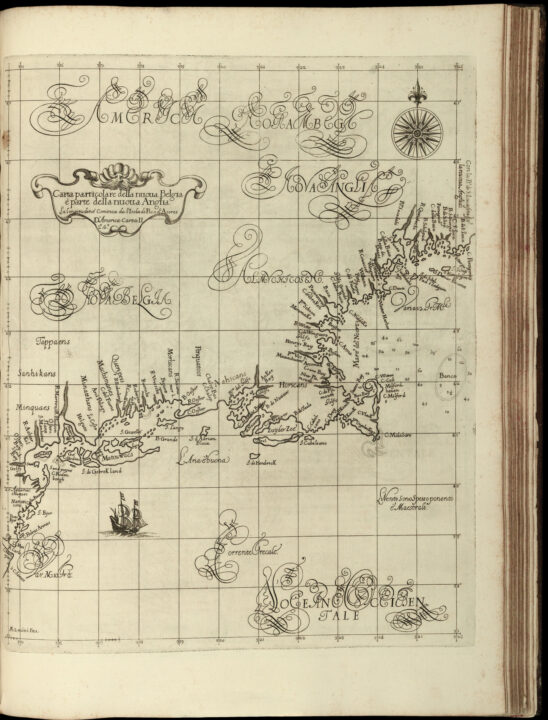 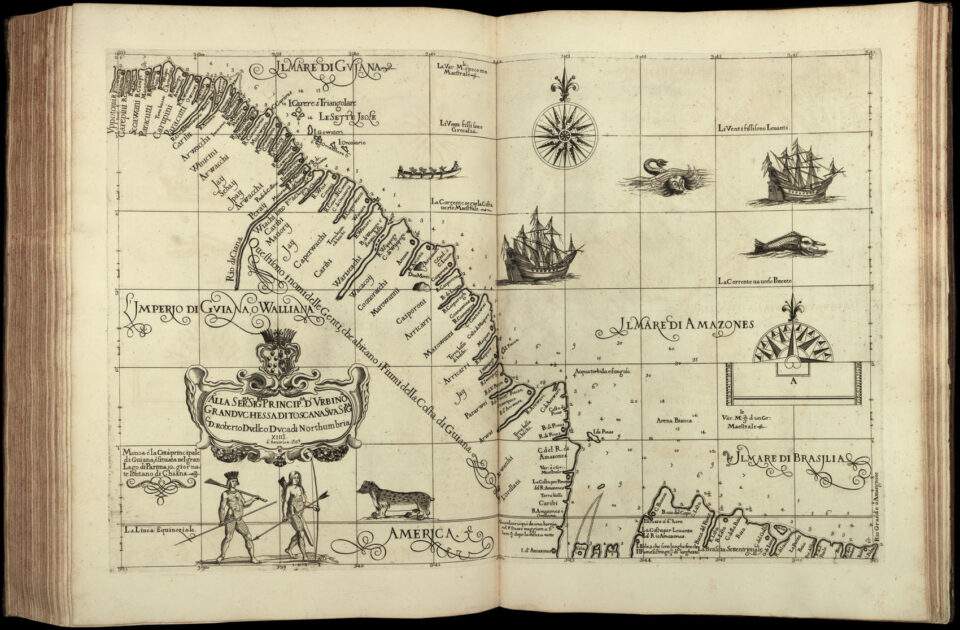 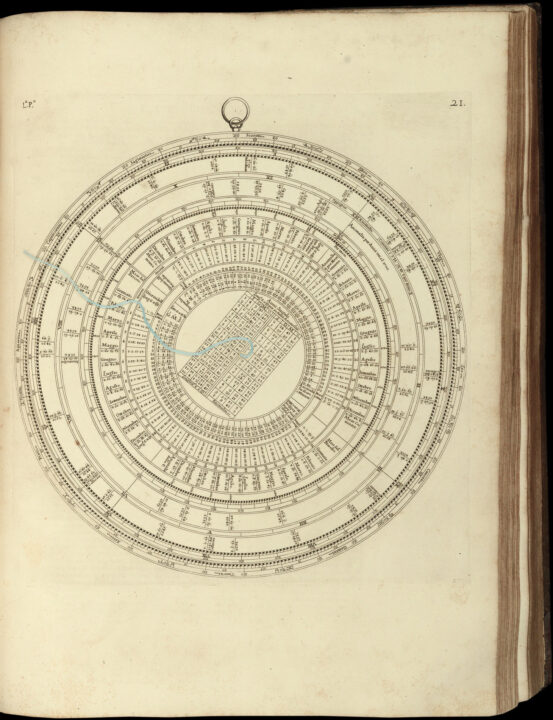 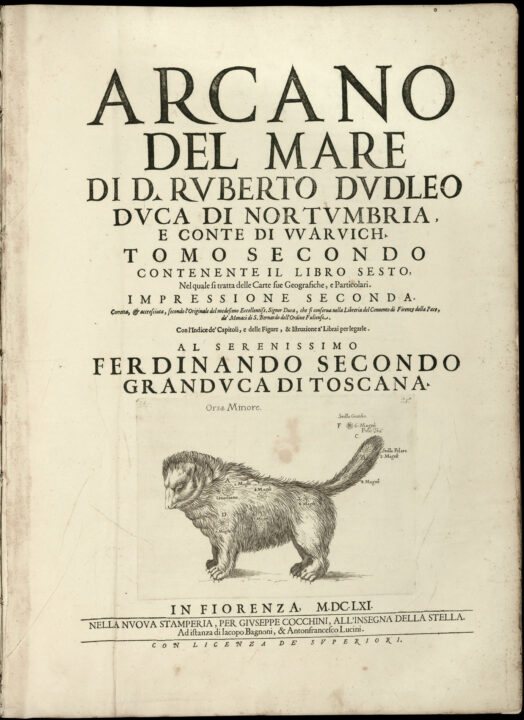 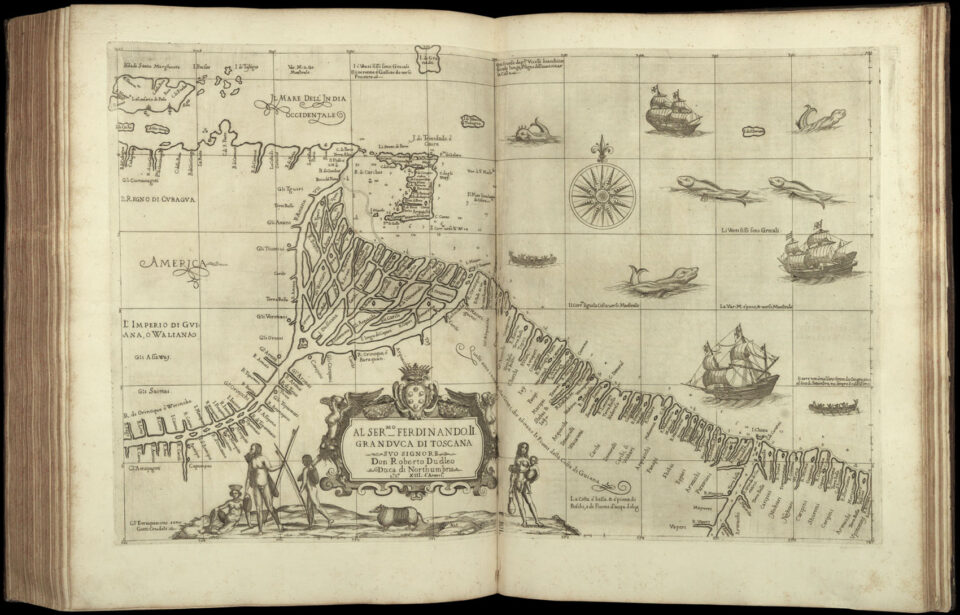 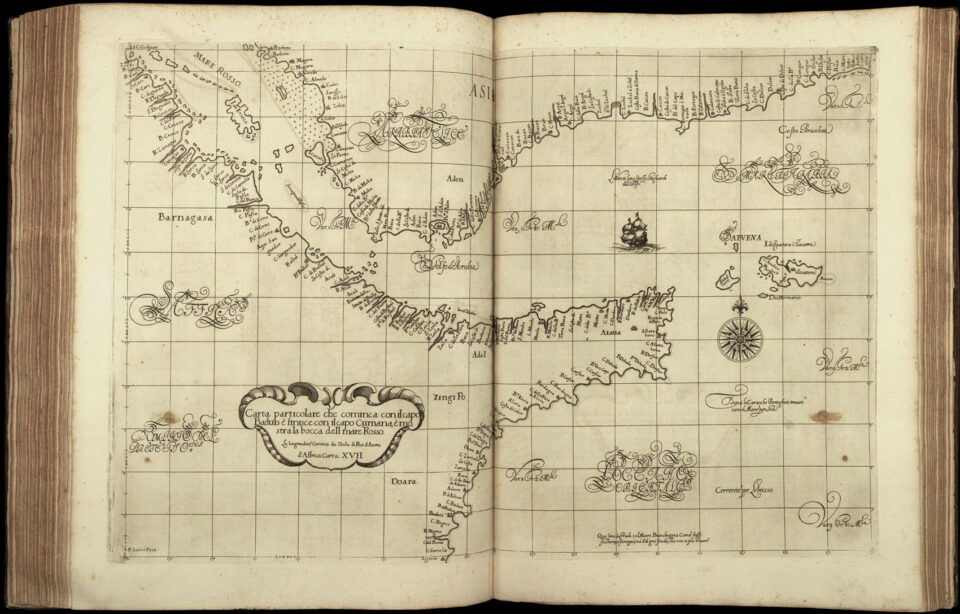 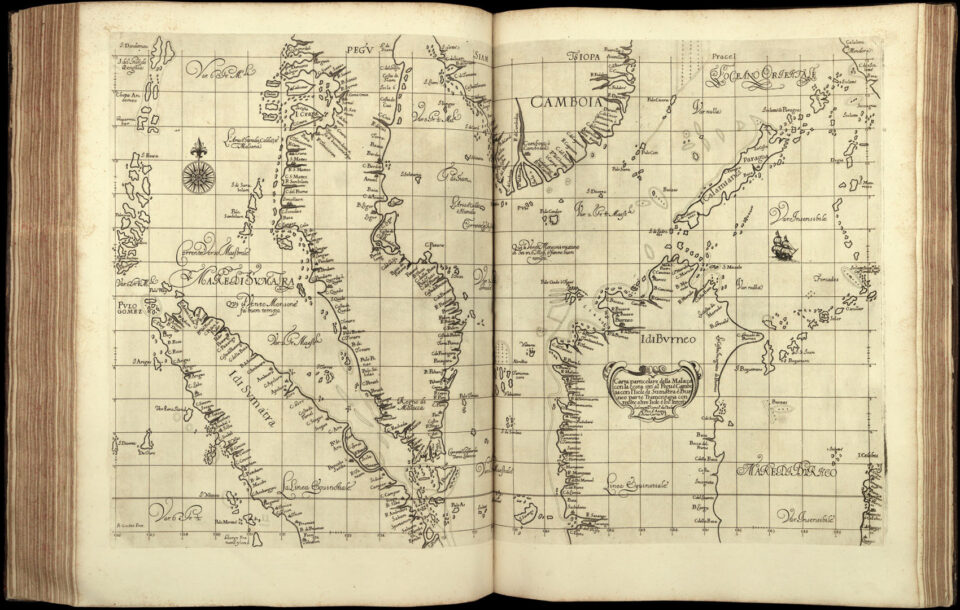 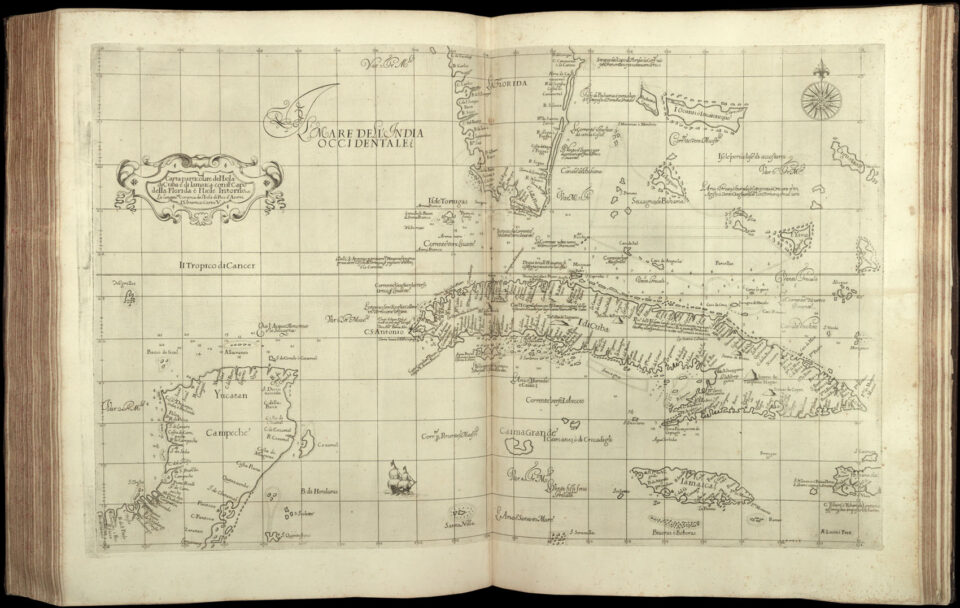 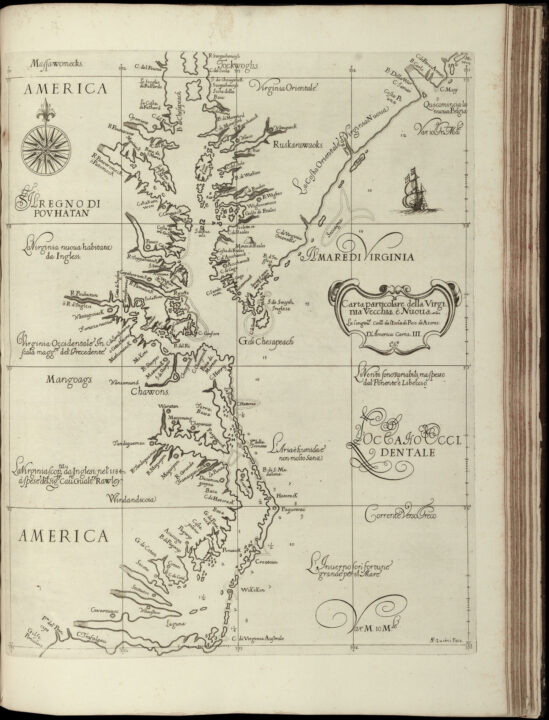 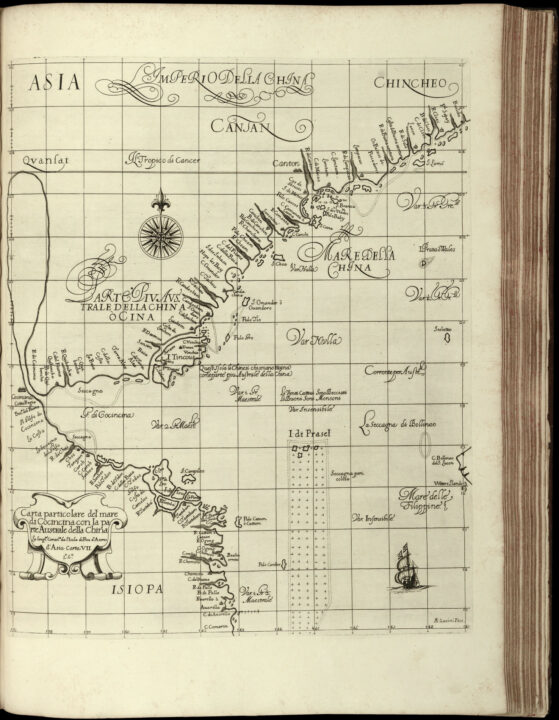 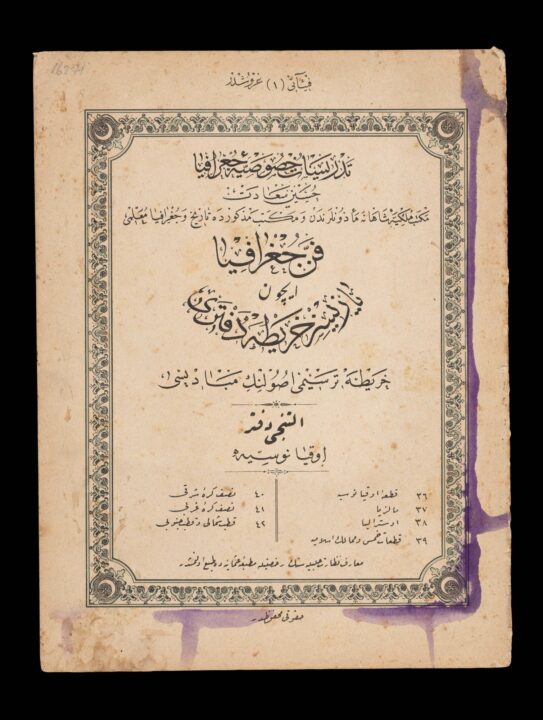