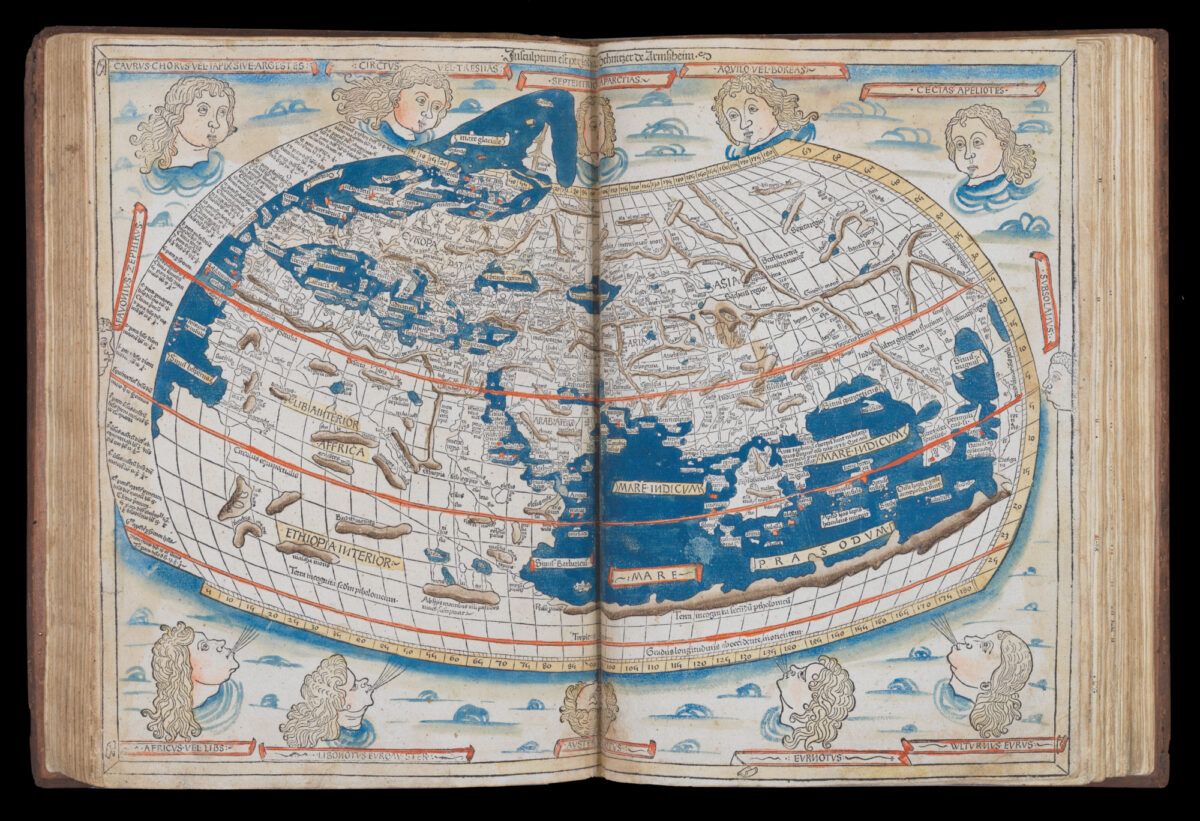 By PTOLEMAEUS, Claudius; translated by ANGELUS, Jacobus, and edited by Nicolaus GERMANUS., 1482

A fine example in a contemporary binding, here bound with Johannes Reger’s ​‘Registrum’ made for his 1486 edition of the work.

The text of Claudius Ptolemy’s (c100-170AD) ​“Cosmographia” was translated into Latin from the original Greek by Jacobus Angelus (c1360-1411) and was first published, in Renaissance times, at Vicenza (1475), Bologna (1477) and Rome (1478). The sumptuous edition published at Ulm in 1482, however, far surpassed all earlier efforts and remains one of the most important publications in the history of cartography. This is the first redaction of the ​‘Geography’ to be printed outside Italy, the earliest atlas printed in Germany, the first to depart from the classical prototype to reflect post-antique discoveries, the first to be illustrated with woodcuts rather than engravings, and the first to contain hand-colored maps, the design and execution of which were ascribed to a named cartographer, and the first to incorporate the five modern maps by Nicolaus Germanus (c1420-1490). Though printed outside Italy, the paper this magnificent atlas was printed on was imported from Italy, and payment made in part by complete copies of the finished atlas.

​“The artist responsible for the woodcut maps identifies himself at the top of the world map as Johannes of Arnsheim, making it the earliest datable printed map to bear a signature” (Campbell p. 137). He has incorporated as his sign a backwards N into the woodcut text on each map.

The Ulm edition, moreover, was the first to depart from the classical prototype by expanding the atlas to reflect post-antique discoveries about the size and shape of the earth. To the canonical twenty-seven Ptolemaic maps were added five ​“modern maps” of Spain, France, Italy, the Holy Land and northern Europe. The world map is of particular interest as it is the first to be signed, by Johannes Schnitzer (ie woodcutter)of Armszheim, who in trade mark fashion has reversed every capital N, and inadvertently provided two Tropics of Cancer. This map is the first to be based on Ptolemy’s second projection, in which both parallels and meridians are shown curved to convey the sphericity of the earth. Armszheim, furthermore, updated the Ptolemaic world picture by incorporating improvements that were probably based on a manuscript of the 1470s by Nicolaus Germanus (ca 1420–1490), a Benedictine monk of Reichenbach Abbey in Bavaria, who is depicted in the first illuminated letter of the atlas presenting his book to the dedicatee Pope Paul II. One notable addition is a rudimentary depiction of Scandinavia to the north, within an extension of the map’s top border. This is also the earliest printed map to show the northernmost reaches of the Atlantic Ocean. The world map, moreover, embodies what is perhaps the most readily apparent feature of the Ulm Ptolemy: its beauty.

​“The text is the early Latin translation by Jacopo d’Angelo [Jacobus Angelus], and its maps are the reworking of the Ptolemaic corpus by the cartographer Donnus (Dominus) Nicolaus Germanus. Three recensions of Nicolaus’s reworkings have been distinguished: the first, drawn on a trapezoid projection reputedly devised by Nicolaus himself and, therefore, also known as the Donis (Donis = Dominus) projection; the second on a homeotheric projection and with three additional modern maps; and the third on the same projection with further revisions and two additional modern maps. The Ulm Ptolemy derives from the third recension, and thus represents Nicolaus’s most mature work” (Campbell, ​‘Earliest Printed Maps’, p. 124).

​“That the stock of the 1482 edition was not exhausted by 1486 is indicated by the existence of a number of copies (some in early binding) containing the additional texts printed by Johannes Reger in the latter year for his own edition…” (Skelton) — The present work is just such a book.

​“For Leinhart Holle, the handsome edition of the Cosmographia which he printed at Ulm in 1482 was an unprofitable investment. Only one more book came from his press; and by 1484 he was out of business and gone from Ulm, and his stock of type, blocks, and printed sheets passed into the hands of Johann Reger, Ulm factor or agent (pro-visor) or Giusto de Albano, of Venice…

Reger lost little time in bringing the Cosmographia back on the market. He compiled a gazeteer or geographical index to the text under the title ​‘Registrum alphabeticum super octo libros Ptolemei’, to which he prefixed a ​‘Nota ad inueniendum igitur regiones;, explaining its purpose and use; and he also obtained, or composed, an anonymous tract entitled ​‘De locis ac mirabilibus mundi’… they were printed by Reger in 1486 and inserted into some unsold copies of the 1482 edition…

In the map Europa IV in the 1482 edition, Reger found the Ptolemaic name Chetaori, corresponding to his birthplace Kemnat in Bavaria; he introduced this into Ptolemy’s list of towns in bk. II ch. 10 [not present in this 1482 edition of the main text], and inserted in his ​‘Registrum’ the entry: ​‘Chemmat siue chetaori li 2 c 10 ta 4 e Hic iohannes reger duxit origine et ano etatis 32 compposuit hoc register in vlma anno domini 1486’. This is the evidence for Reger’s authorship of the ​‘Registrum’, which is otherwise unsigned.” (Skelton)

Claudius Ptolemy was an Alexandrine Greek, and a dominant figure in both astronomy and geography for more than 1500 years. ​“He compiled a mapmaker’s manual usually referred to simply as the ​‘Geography’. He demonstrated how the globe could be projected on a plane surface, provided coordinates for over 8,000 places across his the Roman world, and expressed them in degrees of longitude and latitude. Now maps drawn by Ptolemy himself are known to survive, but maps compiled from his instructions as outlined in his ​‘Geography’ were circulated from about 1300. This Ulm edition of Ptolemy’s ​‘Georgaphy’ is one of the earliest printed.

This is probably André de Morel (Maurel) (1603–1690), Senator in the Parlement de Provence. Morel’s family began their social elevation under Charles d’Anjou (1446–1481) who was also King of Naples and Earl of Provence. It is said that the King put Pierre de Morel in his will and, at his death in 1481, he inherited a part of his library. The family served the French Crown as advisors and officers during wars in Northern Italy and Spain until Henri IV of France. Then in the late 1620’s André de Maurel became a prominent magistrate and member of Parliament of Provence. He ruled his office for 67 years and was known as Senator Morel. His second son, Joseph de Maurel (1658–1717) was Bishop of Saint Paul-Trois-Chatêaux between Aix and Valence. His heir and nephew, François de Maurel, Captain in the ​‘Regiment de Toulouse’ in 1719, inherited his belongings after his death. 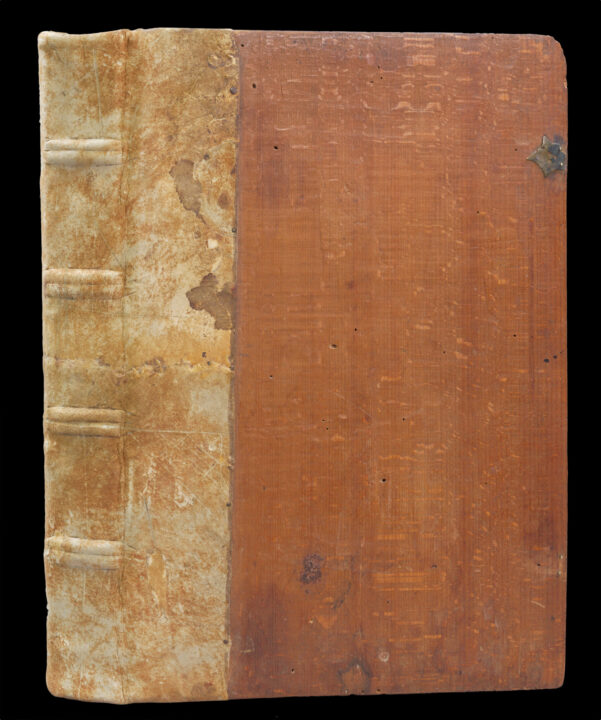 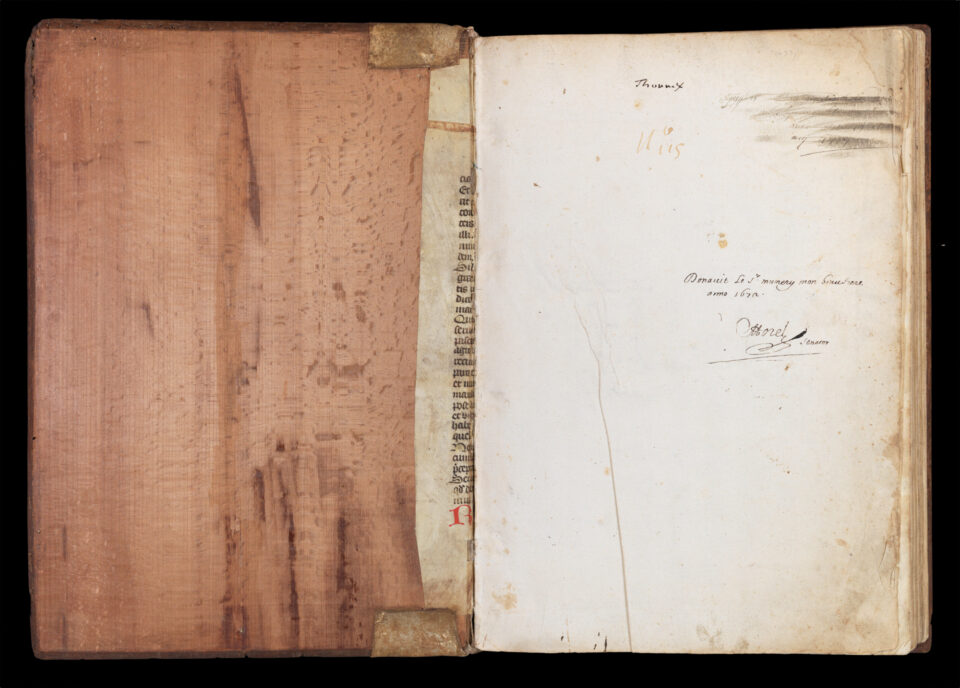 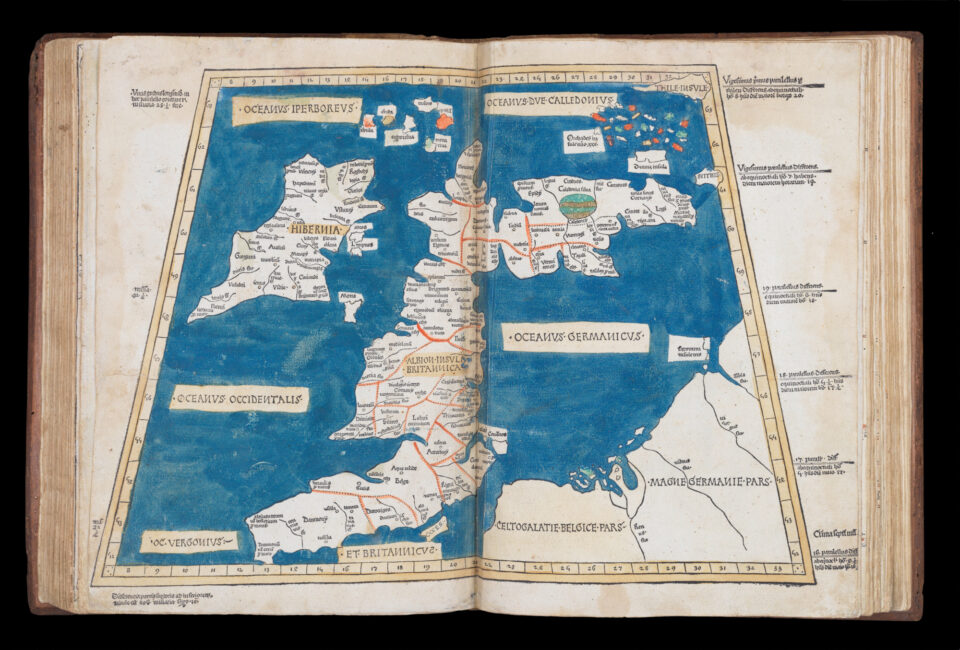 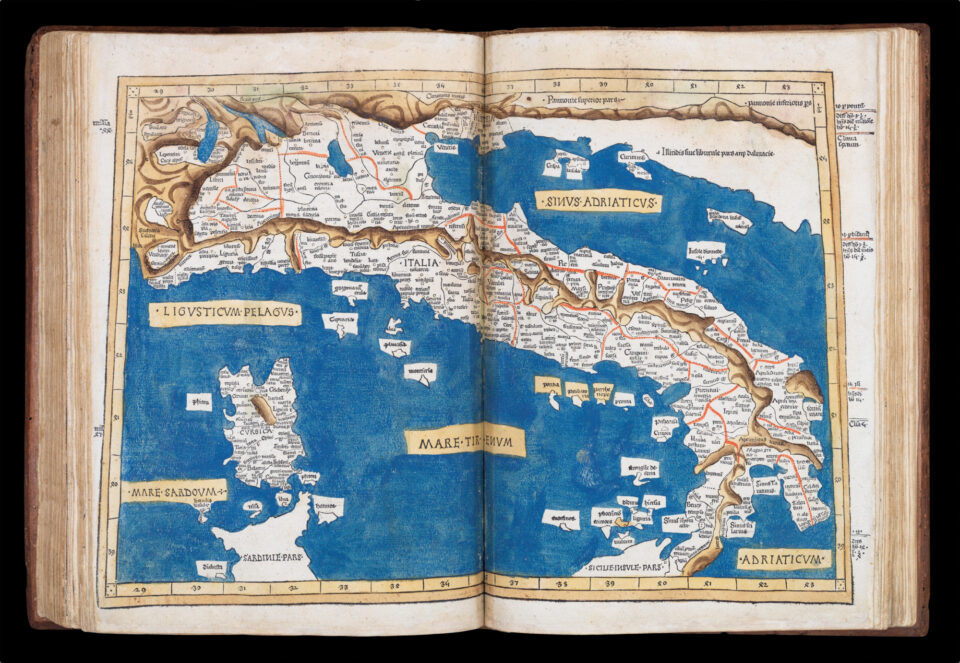 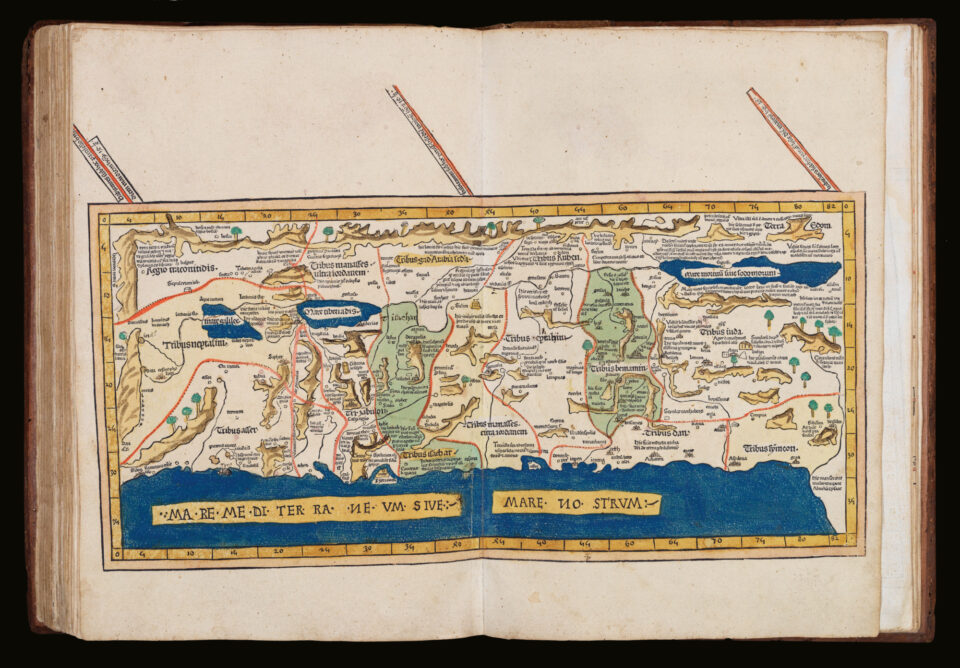 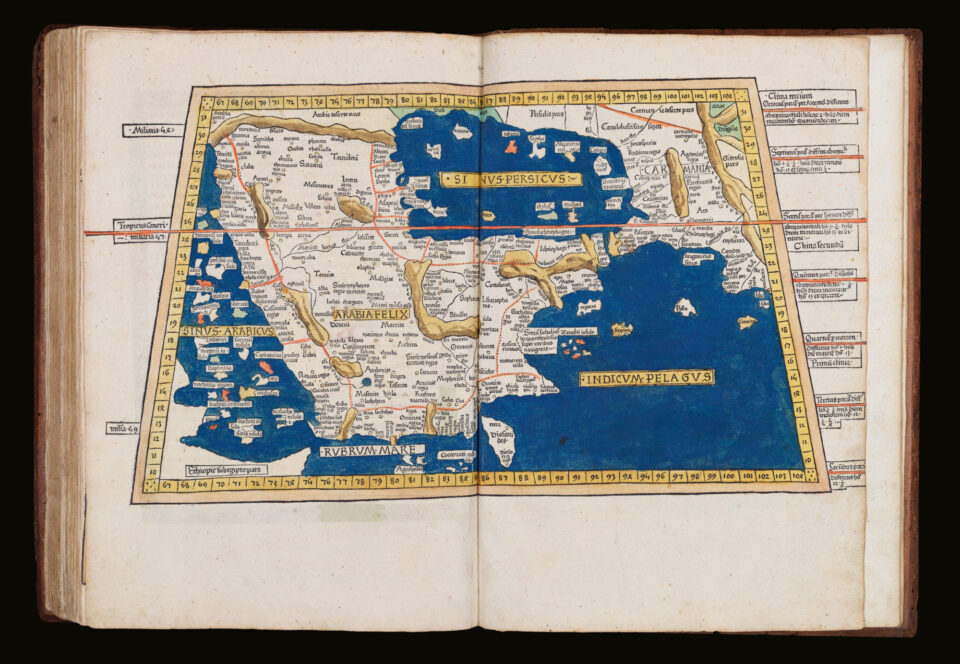