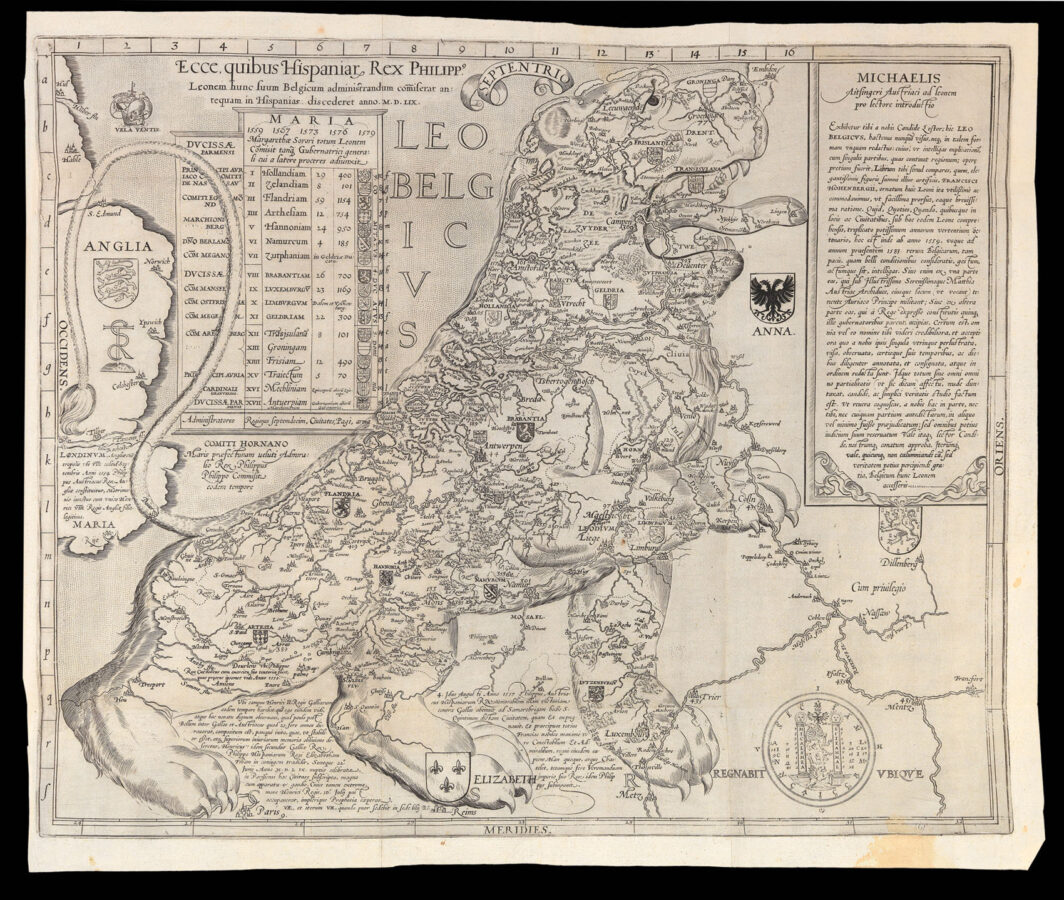 The first atlas devoted to the Netherlands

Rare first edition, in German, of a small atlas devoted primarily to the Low Countries, with a splendid folding map representing the Low Countries in the form of a lion: the first ​“Leo Belgicus” map in its second state. In both the present second state and the first state of 1583, the ​“Leo Belgicus” map gives a numbered list of what the present title-page calls the seventeen provinces of the Low Countries, still a fluid concept at this time. Aitzing’s map and atlas may have established the idea of the seventeen provinces. The 17 smaller numbered maps in the atlas show the first 15 of these 17 provinces, numbered in the same order. Instead of maps of the Bishopric of Mechelen and the Margraviate of Antwerp, however, maps 16 and 17 cover France and the German states, though the text on the back includes a paragraph about Mechelen and Antwerp respectively. The Chorographia further contains portraits of King Philip II of Spain, Queen Elizabeth I of England, Margaret of Parma, Alexander Farnese, the Duke of Alva, Luis de Requensens, John of Austria and Prince William of Orange. Each small map and each portrait is printed on one side of a whole sheet of paper with the relevant text in two pages on the back, with the quire signature on the first page. They are mounted on stubs, so that the maps and portraits can be opened flat. The unusual inclusion of a W (printed as ​“VV”) in the quire signatures confused some binders, so that the portrait of Alexander Farnese is often bound out of the intended sequence, but in the present copy it correctly falls between V and X.

Michael von Aitzing (or Aitsinger or Eytzinger), a descendant of an old Austrian noble family, lived in the Low Countries for many years. His ​“Leo Belgicus” map appears in several editions of his De Leone Belgico, first published in Latin in 1583 and apparently in German in 1584–85, which further show numerous city maps and views but not the 17 maps and 8 portraits of the present Chorographia. It therefore serves as a valuable supplement to that work but also stands on its own as an atlas. Since both included the ​“Leo Belgicus” map, it may have been omitted in or removed from copies of the Chorographia when they were issued together with De Leone Belgico. Perhaps for this reason and due to later removal, many copies lack this most important map, which is an essential part of the atlas when it stands alone. Aitzing’s lion map was extremely influential and widely imitated by many cartographers in later Dutch histories and atlases. It includes an introductory text as well as a short account of Aitzing’s own experiences in the war between Philip II and Henry II, printed between the lion’s legs. In its present second state, the map adds two coats of arms: France with the name ​“Elisabeth” (of Valois) and the Imperial double-headed eagle with the name ​“Anna” (of Austria), and the list of the 17 provinces adds letters and numbers to indicate their location following the grid divisions indicated by the numbers in the border at the head and letters in the border at the left.

The watermark in the endpapers (crowned single-headed eagle with a rampant lion on its breast, above a merchant’s mark) is close to Briquet 1889, found in the middle and lower Rhine valley and in Roermond, just across what is now the Dutch border, in the years 1587–1590. The same merchant’s mark is found with other eagle watermarks (Briquet 191 & 1993) in the years 1588 to 1594 in the same region (including Cologne) and in Rotterdam and Den Bosch. Bonacker calls the Chorographia ​“actuellement fort rare” and it is even rarer with the folding map (not explicitly mentioned in the descriptions of most of the copies listed above): Van der Heijden lists only a copy in private hands and notes, ​“The majority of the Chorographia copies consulted did not (or did no longer) have the lion map”. 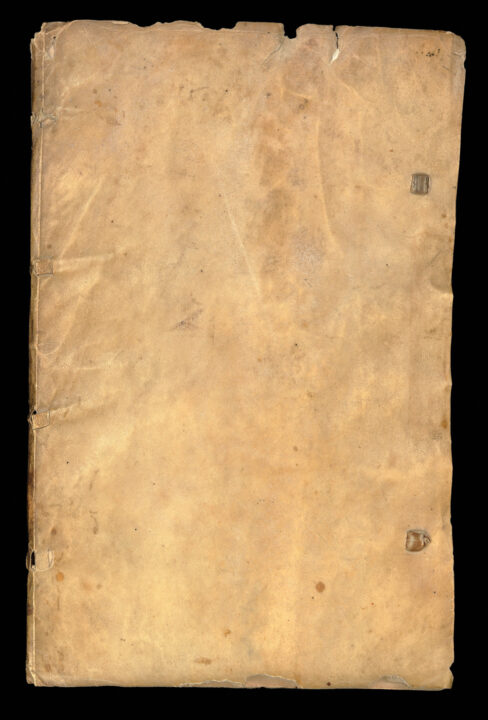 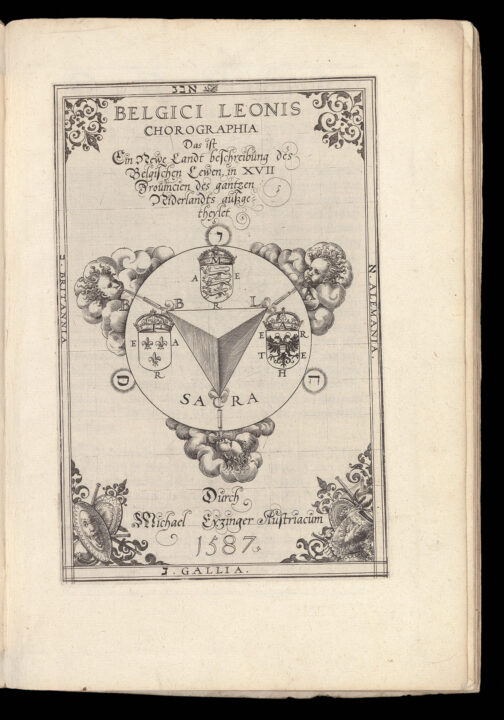 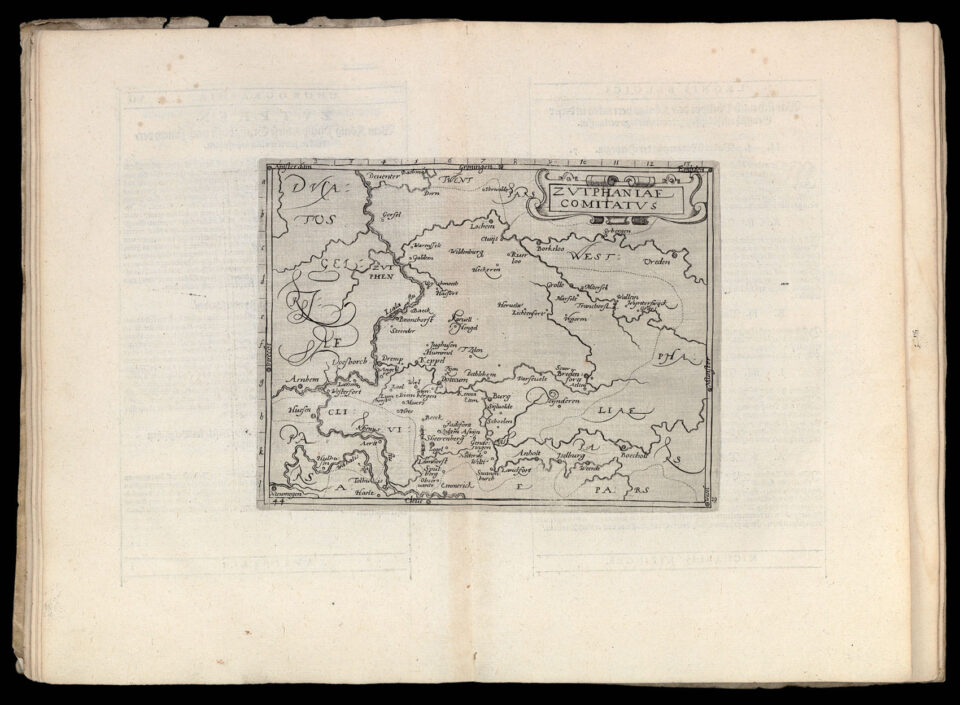 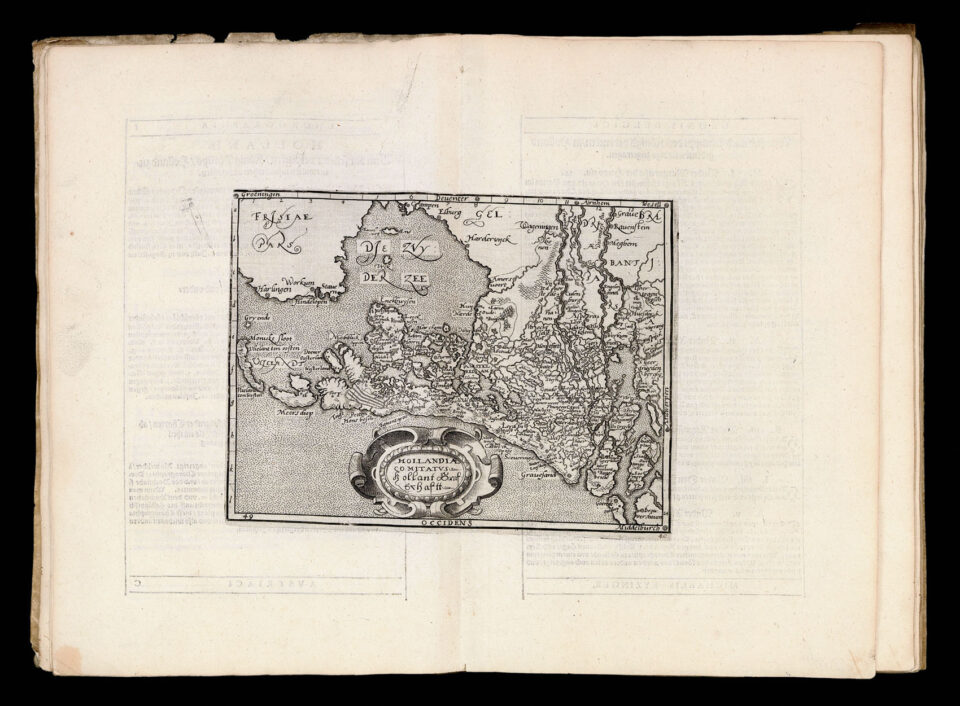