Britannia: or a Chorographical Description of Great Britain and Ireland.

Large paper copy of the revised second edition of Gibson’s translation. First published in Latin in 1586, the first edition in English appeared in 1610. ​“If Camden was not the first English historian (in the modern sense of the word), topographer and antiquarian, he was certainly the first to relate the three studies, and his ​‘Britannia’, primarily topographical, is the first book which shows… the need to evaluate sources” (“Printing and the Mind of Man” 10).

The first survey of Great Britain county by county and the first study of Roman Britain as perceived in the landscape of sixteenth century Britain. At twenty Camden left Oxford with no degree ​“no known financial resources, patron, or position. For four years the record is silent on how this young man with no publications and no degree occupied himself. Unsubstantiated tradition has him travelling Britain, perhaps under the patronage of Gabriel Goodman, dean of Westminster, in search of antiquities and topographical and historical material that found its way into the ​‘Britannia’. The economic and social realities of his time were such as to make Camden in large measure the product of cultural institutions, and his disappearance during these years between known institutional affiliations is in itself interesting. Camden’s appointment in 1575 as second master at Westminster School returns him to the public landscape. He spent twenty-two years at the school that was emerging as academically one of the most prestigious in the kingdom…not only was he an effective educator and administrator, but he also travelled, collected material for and wrote the ​‘Britannia’, brought it through its first four enlarged editions, and compiled a Greek grammar… In 1576, he inherited his father’s property in Staffordshire which provided him with additional financial security. As early as 1577 he came to the attention of the great geographer Abraham Ortelius, then travelling in England, who encouraged Camden in his national enterprise, and whose work provided him with a model for topographical and historical writing. Further encouraged and supported by Dean Gabriel Goodman and his nephew Godfrey Goodman, Camden travelled extensively in pursuit of topographical and antiquarian information: in 1578 through Suffolk and Norfolk, and in 1582 to Yorkshire and Lancashire. Working with a knowledge of the current continental methods and the example and friendship of English scholars such as Alexander Nowell, William Lambarde, his schoolmate Richard Carew, and others, he developed his own approach to empirical research into topographical and historical study through travel, archival scholarship, and the use of original documents, along with the deployment of linguistic and philological evidence and artefacts for interpreting historical and cultural events. ​“As his work advanced Camden’s reputation spread, well before the eventual publication of the ​‘Britannia’ in 1586. Scholars from across Europe, both protestant and Roman Catholic, included a meeting with Camden on their itinerary when they came to England. Geographers such as Gerardus Mercator, lawyers such as Alberico Gentili, scholars and poets such as the Hungarian Parmenius, and statesmen such as Barnabé Brisson, president of the parlement of Paris, sought Camden’s company, advice, or views. His work for the ​‘Britannia’, then, was conducted in the field, through study and collaboration, and through research into original sources, both printed and manuscript.

​“Much anticipated, the ​‘Britannia’ made its début on 2 May 1586, Camden’s thirty-fifth birthday; the squat octavo volume was dedicated to Lord Burghley. Of Camden’s published work the ​‘Britannia’ has had the greatest and most lasting impact. It received immediate recognition when it appeared, and its successive, enlarged editions of 1587, 1590, 1594, 1600 (dedicated to Queen Elizabeth) and 1607 (dedicated to King James) and its English translation of 1610 by Philemon Holland attest to its popularity… By 1607, the year of its last Latin edition in Camden’s lifetime, published in folio and containing an index, maps by Saxton and Norden, and engravings of coins, monuments, and topographical sites, it had evolved into an impressive and editorially sophisticated work of scholarship. It continued to be edited and translated during the eighteenth and early nineteenth centuries, the major editions being those of Gibson in 1695 and 1722, and Richard Gough in 1786 and 1806” (Wyman H. Herendeen for DNB). 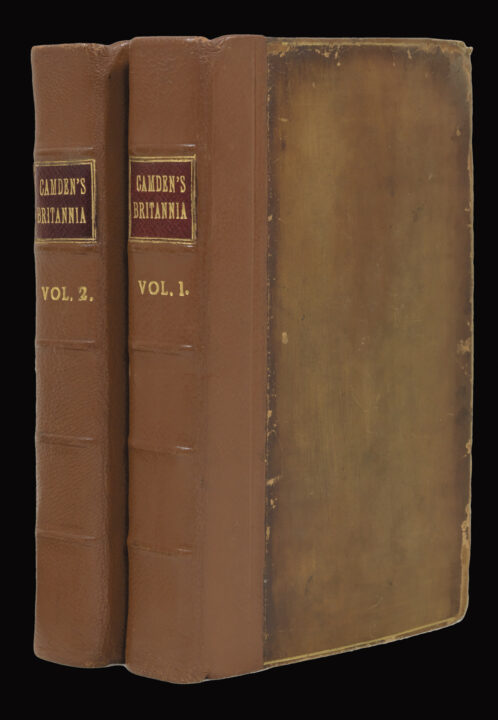