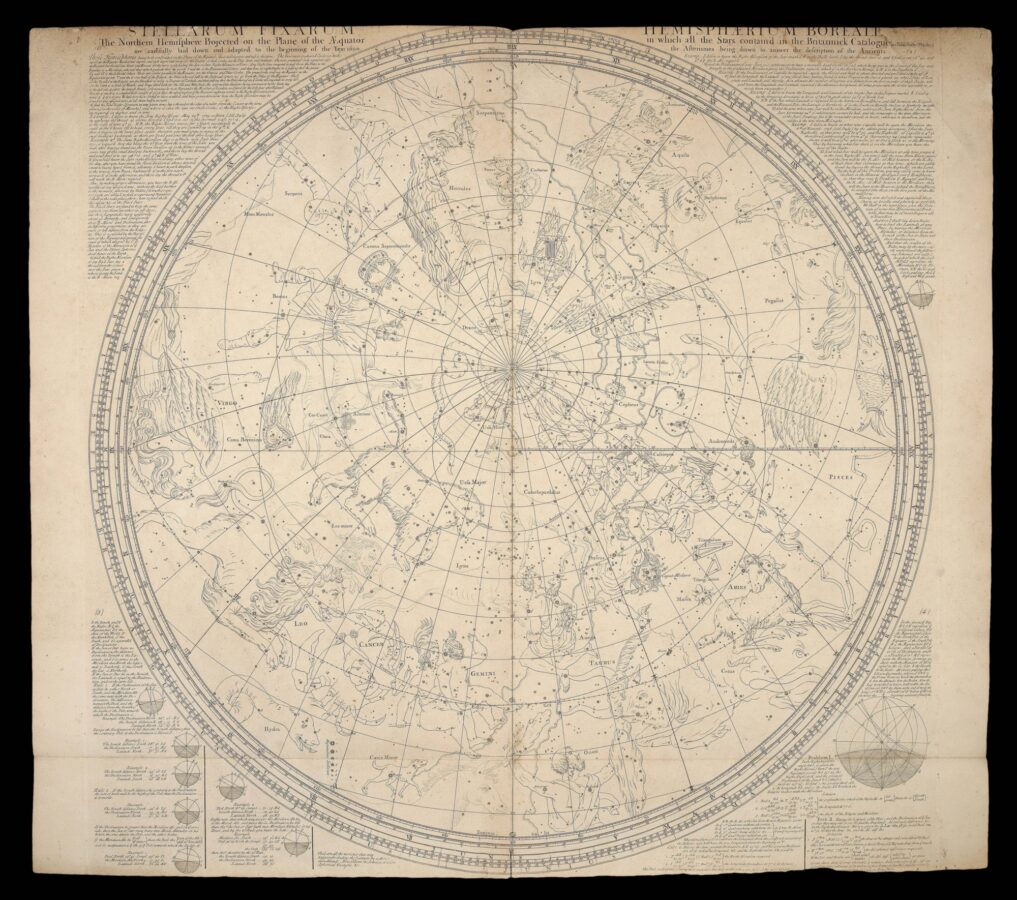 At the beginning of the eighteenth century there was a great demand, from scientists and navigators alike, for an extensive and reliable star catalogue and atlas. The charts of John Seller were unreliable, those of Johannes Hevelius unobtainable, and the perfectionist John Flamsteed was reluctant to issue his great celestial atlas. The demand was met by the cartographer and mapseller John Senex, who — with the considerable aid of Edmond Halley — published a chart of the solar system in 1712, a zodiac in 1718, four star charts of the north and southern hemispheres c1721, and a planisphere in 1740. The charts were, at the time of publication, the most up to date rendering of the heavens available, and proved hugely popular. Even after the posthumous publication of Halley’s ​‘Atlas Coelestis’ in 1729, the plates would continue to be issued up until the end of the eighteenth century.

Although all the charts published by Senex broke new ground, as they were based on Flamsteed’s work, it was his ​‘Zodiacus Stellatus’ and his planisphere of 1740 which proved to be the most important, and in the case of the zodiac chart, the most controversial.

John Flamsteed, the Astronomer Royal, was a perfectionist; as such, he was determined that his material should not be published until he was satisfied with its accuracy, a day which never quite arrived. However, in 1712, under pressure from Isaac Newton and Edmond Halley (among others), he provided the Royal Society with a manuscript copy of his catalogue of stars and an explanatory text, giving them permission to edit the text (but not the catalogue) for publication. Instead, Halley published the star catalogue without Flamsteed’s permission. An enraged Flamsteed responded by buying every copy of the book he could find (about three hundred out of the four hundred printed) and destroying them all. Subsequently, Halley took the raw data from the catalogue and constructed a star chart, the ​‘Zodiacus Stellatus’, from Flamsteed’s observations, which was published under Senex’s name. In a letter from one of Flamsteed’s assistants to another from 1720, Joseph Crosthwaite commented:

”… Senex is so much a tool of Dr. Halley’s, and affronted Mr. Flamsteed so much in his lifetime by engraving the ​‘Zodiacus Stellatus’, and putting his own name to it, in order to screen Dr. Halley from the law, that I am afraid he is not to be trusted” (Warner).

As Crosthwaite noted, the map was issued without credit either to Flamsteed or Halley, but Senex’s catalogue description makes the link clear. ​“The ​‘Zodiacus Stellatus’ depicts the ​“zodiac constellations in three long strips arranged vertically over two pages [i.e. sheets]… Each sheet was centred 8 degrees above and below the ecliptic using a cylindrical projection with geocentric orientation” (Kanas).

The Planisphere
The large planisphere, over 60 centimetres across, is centred on the north equatorial pole down to 38 degrees S declination, and uses a polar equidistant projection with geocentric orientation. The work was so well respected that:

​“In anticipation of the return of Halley’s comet of 1682, Charles Messier in Paris marked on a map the routes the comet might follow in 1758 or 1759; for this, he wrote, he chose the great planisphere of two-feet in diameter engraved in England by Senex in 1746, on which was included all the constellations and stars visible above the horizon of London.” (Warner)

It is not known whether Senex intended these plates to form an atlas. We are unaware of any advertisement or catalogue by Senex listing a celestial atlas. However, later sales catalogues from the 1760s by Carrington Bowles, John Bowles, and Robert Sayer — who had acquired the plates from Senex’s widow Mary in 1746 — do list the charts under the heading, ​“Senex’s Atlas Coelestis, or charts of the Heavens…”. It should be noted that none of the extant examples bears a title page, with the British Library example bearing an advert for the atlas issued by Sayer in 1763.

The present group of charts bear the imprints of Robert Sayer, Carrington Bowles, and John Bowles, and correspond with the advertisement in John Bowles’s ​‘A Catalogue for the year MDCCLXVIII’ (1768):

​“Atlas Coelestis; or, charts of the Heavens: Containing, the following hemispheres; in which are carefully laid down all the stars in Mr Flamstead’s catalogue, as published by Mr Halley; being above two thousand more than were inserted upon any hemispheres; wherein are so designed, as to answer the description of the antients, and the letters of reference, made use of by Bayer in his tables, are inserted. The whole may be had together in half binding, price 11. 7s. or in sheets separate at the prices annexed

1. The Northern Hemisphere, projected on the plane of the Equator. Price 3s.

2. The Southern Hemisphere, projected on the plane of the Equator. Price 3s.

3. The Northern Hemisphere, projected on the plane of the Ecliptic. Price 3s.

4. The Southern Hemisphere, projected on the plan of the Ecliptic. Price 3s.

5. The. Zodiac: wherein is represented, in their true situation and magnitude, all those stars to which the moon and planets can at any time make their appulses, adapted to the year 1690, in a scale so large as to afford a tenth of an inch to a quarter of a degree, by Dr. Halley; with his method of determining the true bearing and distance of the ship at sea from her port. On two sheets, price 6s. Pasted on cloth, and rolled up in a round case price 10s 6d.

6. The Planisphere, on which the stars, visible in the latitude of 51o 30′. are laid down according to their right ascensions and delineations for the year 1740. Price 3s
N.B. This projection is so contrived by means of a moveable horizon, that the time of any star’s rising, setting, or coming to its meridian, for every day in the year, may be readily seen at one view.

7. The print of the moveable horizon for the preceding palnisphere. Price 3s.

8. A Scheme of the Solar System, with the orbits of the planets and comets belonging thereto, described from Mr Halley’s accurate table of comets, founded on Sir Isaac Newton’s wonderful discoveries. By William Whiston. Price 3s.“

The layout of the present atlas varies slightly from the order advertised by John Bowles, with the two ecliptic plates (3 and 4) reversed, as are the planisphere and moveable horizon plate.

Rare. We were only able to trace six examples of the atlas: the British Library; University of Erfurt; Harvard University; Princeton University (ten plates — the extra plate ​‘The Universal Vicissitudes of the Seasons…’, was not published by Senex, and bears the imprints of Robert Sayer, and Carrington Bowles alone — see Sayer and Bennett Catalogue for the year 1775); Leiden University (nine plates); Augsburg University (eight plates). 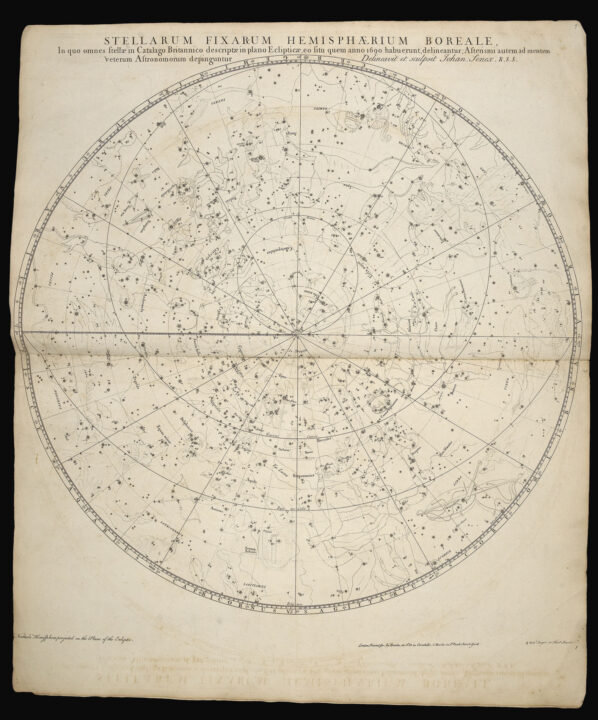 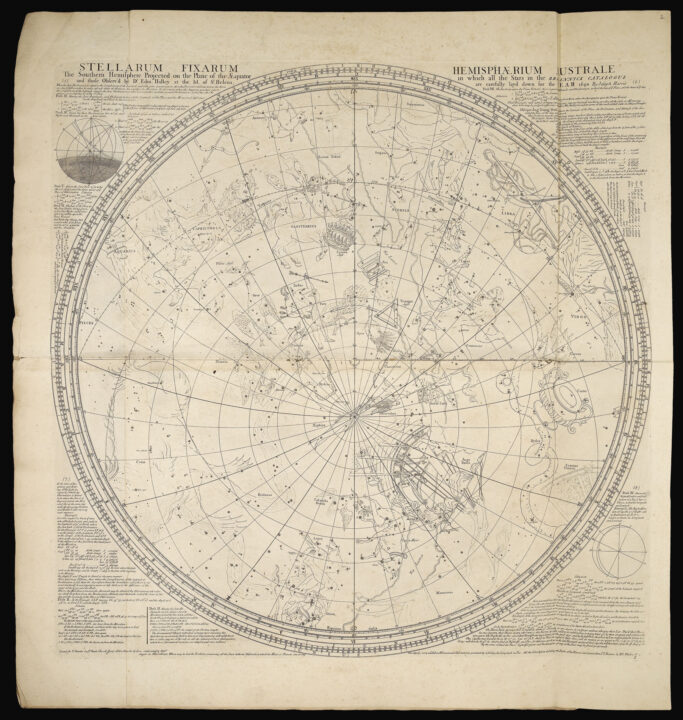 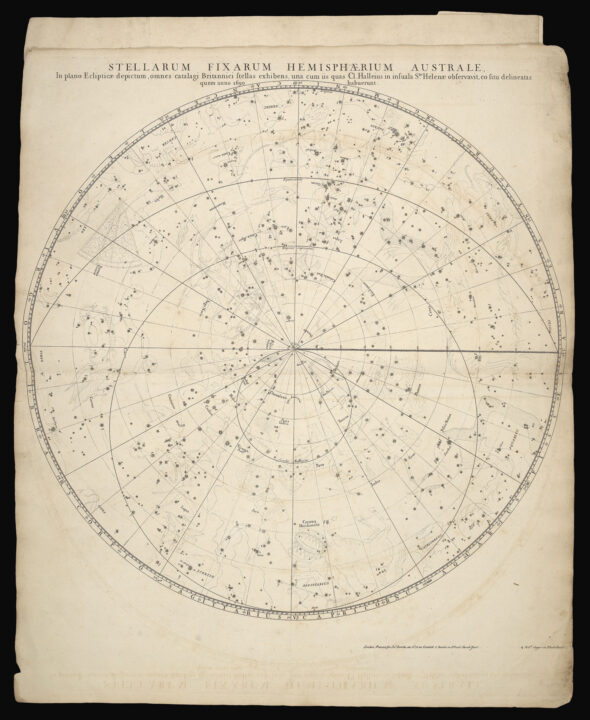 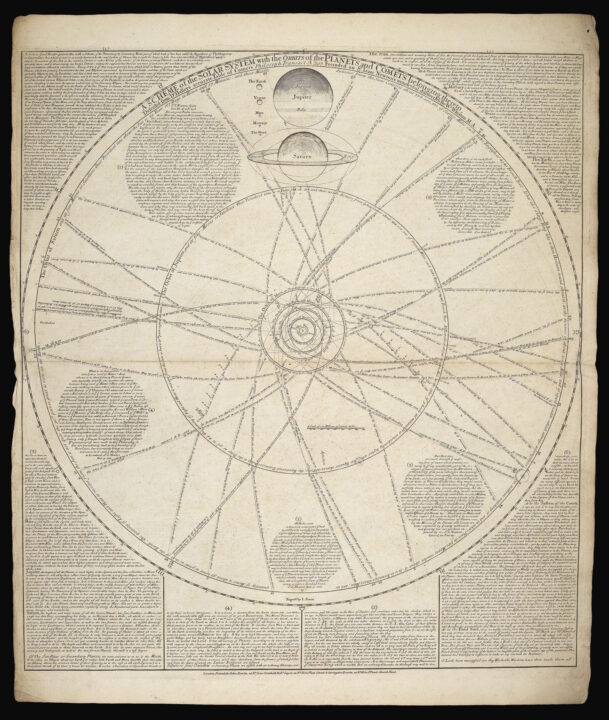 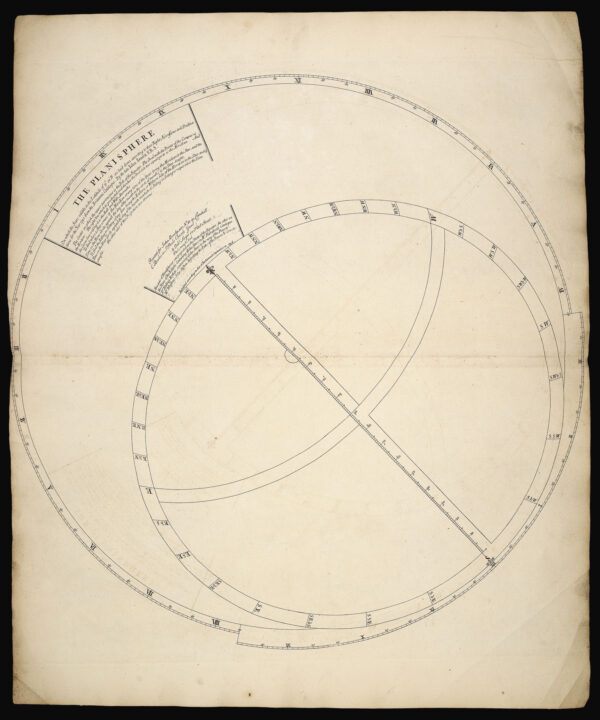 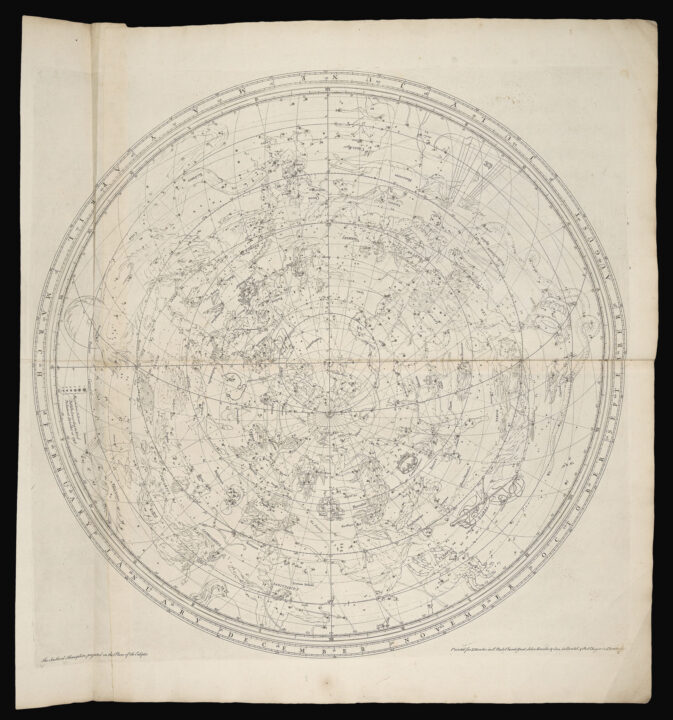 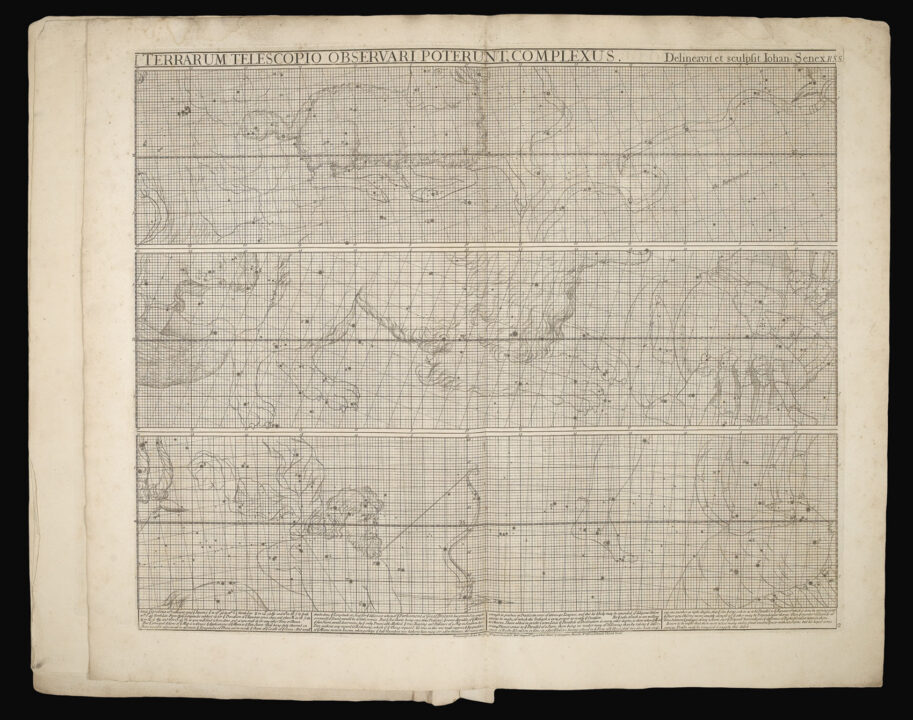 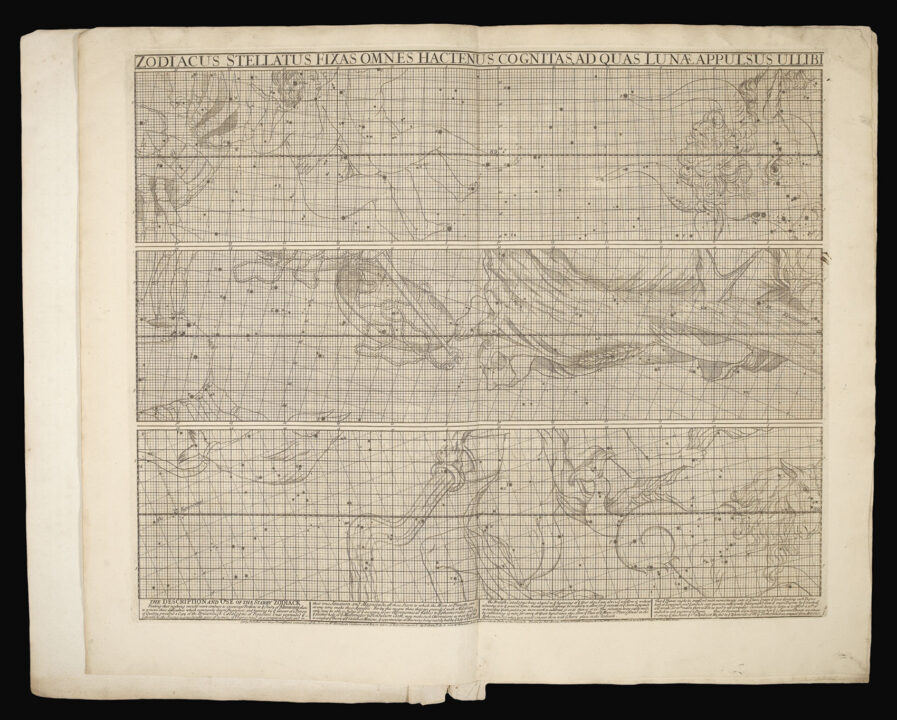 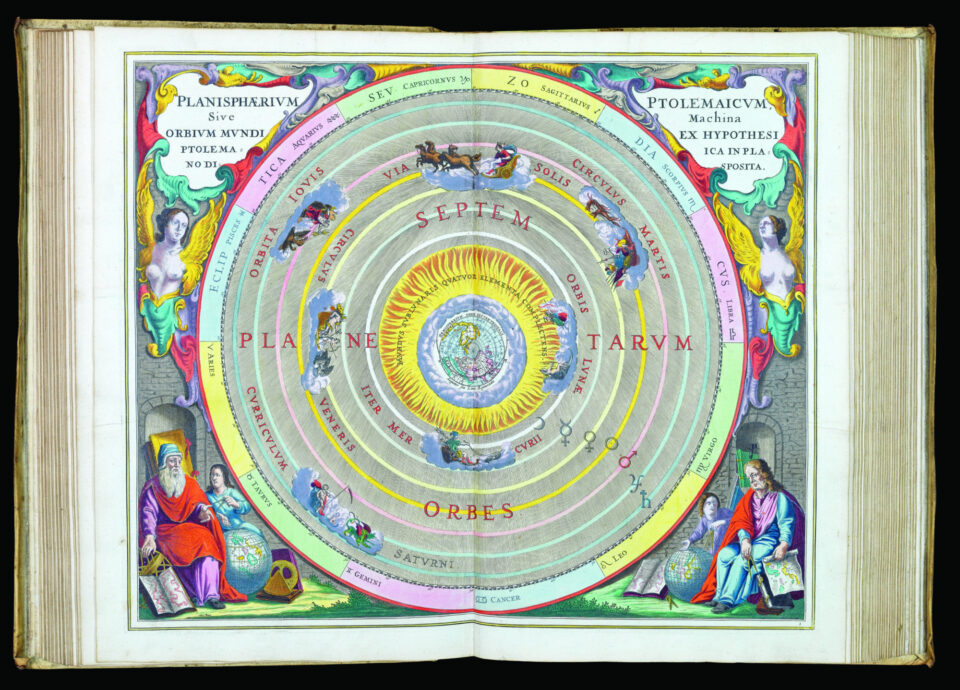 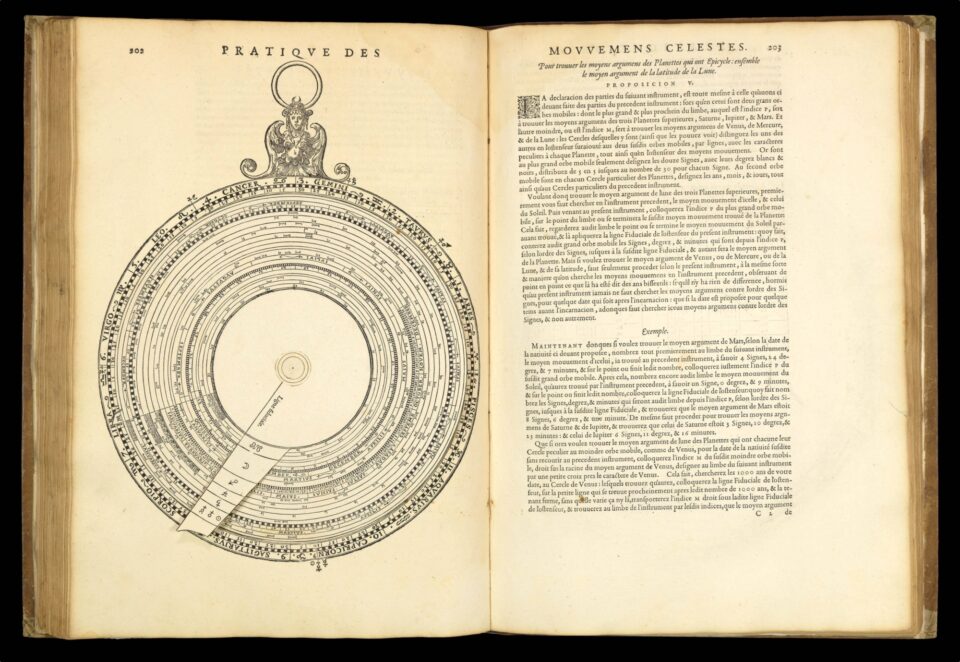