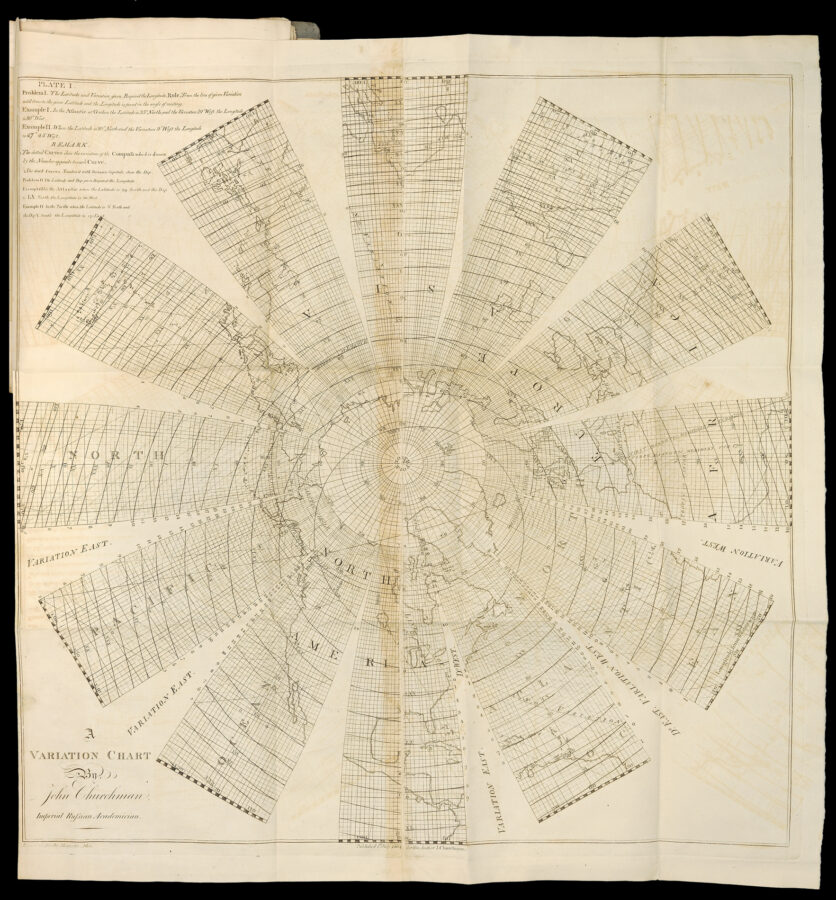 The Magnetic Atlas, or Variation Charts of the whole Terraqueous Globe; comprising a system of variation and dip of the needle, by which, the observations being truly made, the longitude may be ascertained. The fourth edition with considerable additions.

Fourth expanded edition of a scarce and unusual work by an early self-taught American scientist: an interesting footnote to the eighteenth century history of navigation in general and the search for a method of measuring longitude in particular.

The first edition of the present work was published in 1790 under the title An Explanation of the Magnetic Atlas, or Variation Chart. A nineteenth century history of Chester County, Pennsylvania, noted that the book encountered ​“violent opposition from some characters of eminence in the learned world … who could not relish that an obscure and self taught genius should acquire ideas that had so long escaped the penetration of men who had long been familiar with the illuminations of science” (pp.497–8). In 1794, Churchman published a much expanded edition of his work under a new title, which was followed by an 1800 edition and then the present final edition, ​“with considerable additions,” in 1804. The text presents a rich history of navigational accounts and scientific speculation on the subject of magnetic variation and offers methods for determining longitude based on the revolution of magnetic points around the Earth’s north and south poles. A final chapter poses an interesting hypothesis on major shifts in coastal boundaries based on ​“magnetic tides,” and the appendix prints numerous excerpts of responses to Churchman’s work. The folding charts, all dated July 1, 1794, include ​“A Stereographic Projection of the Sphere on the Plane of the First Magnetic Meridian” and two large hand-colored charts (one of the northern and one of the southern hemispheres with their magnetic orbits). John Churchman (1753–1805) was a Pennsylvania-born surveyor who published two maps of the Delaware and Chesapeake Bays in 1778 and the early 1780s. During the time of his surveying work, Churchman was privately speculating on problems concerning the variation of the compass, ​“why it should change, at one time quick, at another time slow, now become stationary, and then retrograde” — phenomena that had never been sufficiently explained by science (p. iv). In 1787, he presented a geographic chart of magnetic variation and his theories surrounding it to the American Philosophical Society, where he received ​“mild encouragement” (Smith, p.83). He continued to pursue his investigations for the remainder of his life, publishing four editions of this work on the subject between 1790 and 1804, corresponding with numerous notable scientists and learned societies, and speaking at learned societies throughout Europe. He died at sea in 1805. 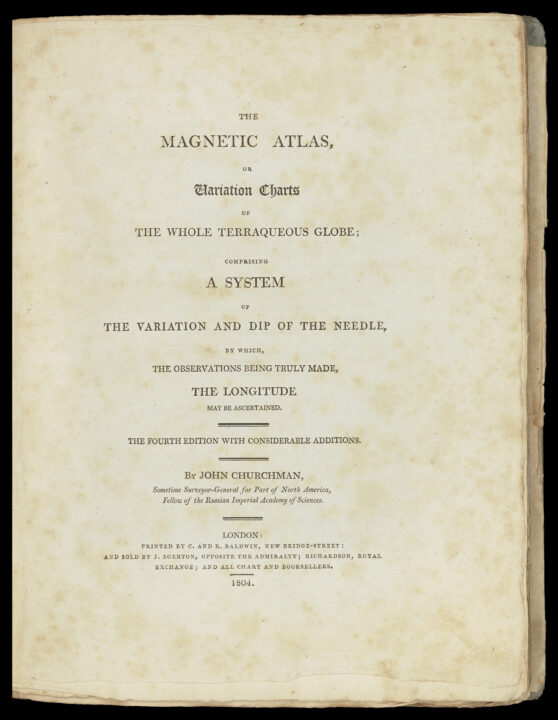