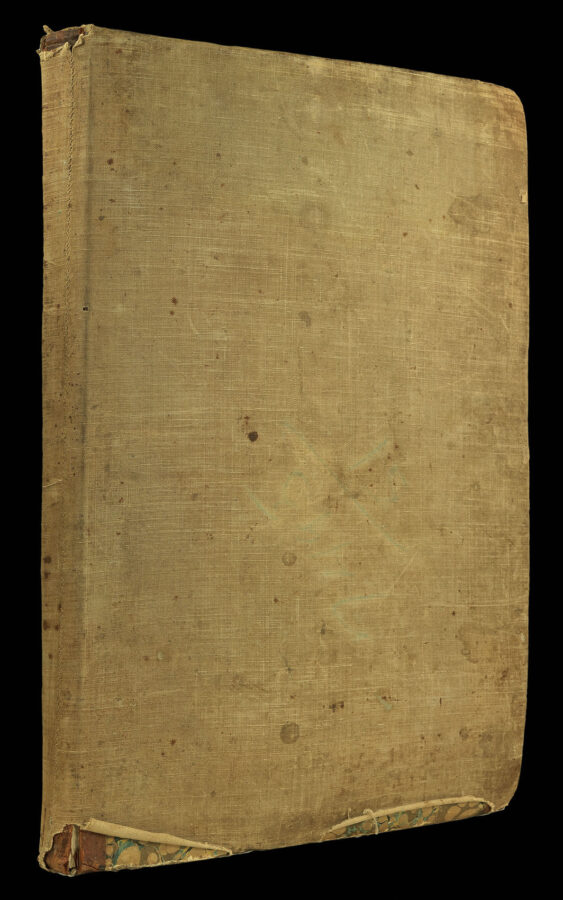 The Complete East India Pilot from London to any Part of the Red Sea, Gulf of Persia, Indian and China Seas, Australia, van Dieman’s Land, and New Zealand; comprehending a set of new and accurate charts, both general and particular, exhibiting all the passages out and home … The whole drawn from the most recent surveys … Ninth edition, arranged and improved by J.W. Norie.

A very rare copy of Norie’s atlas of charts to the sea-routes to India, the Far East, Australia and New Zealand: this copy used aboard ship in a trading voyage to India and China.

John Norie (1772–1845), the most celebrated hydrographer of his day, learned his trade as an apprentice to chartmaker William Heather, eventually taking over the company when Heather retired in 1813. J.W. Norie & Co. operating from the Navigation Warehouse and Naval Academy offered nautical instruments, charts and instructional texts on navigation. The first edition of the present work was published by Norie in 1816 with just 28 maps. Norie understood the vital need for updated charts and the work was constantly revised and expanded: for example, the fifth edition appeared in 1827 with 31 maps, and the eighth edition published in 1838 had 43 maps. This edition was the final produced in Norie’s lifetime and contains many notable additions, including maps devoted to Australia. Norie worked in partnership with Charles Wilson (latterly as J.W. Norie & Wilson), until Wilson took over when Norie retired.

This copy of Norie’s great work is particularly desirable: the condition is very good and it contains the complete complement of charts (as listed). More importantly, the atlas shows evidence that it was used on board one of the vessels involved in the lucrative East India trade. Manuscript notations on several maps show that this volume was used aboard the East Indiaman ​“Barham” during its maiden voyage to India starting in 1846, and on at least one subsequent voyage in the following year. The sail-cloth covering over the binding is a typical example of work done on board in an effort to protect the original binding.

The individual maps included here are as follows:

1) ​“A New and Correct Outline Chart Intended for the Use of the Officers in the Royal Navy and Merchant’s Service to prick off a ship’s track.” April 25, 1833, with additions to 1837. Large folding world chart printed on 3 sheets joined. With manuscript additions in ink dated 1846 and 1847 showing the track and daily progress of the East Indiaman ​“Barham” during two voyages to India. The ​“Barham” was launched in London in May 1846, as part of the Blackwall Line. The track of the first (her maiden voyage) starts south of the Lizard in the English Channel on or about the 8th July 1846 (to judge from the number of daily position markers) but the first date recorded is the 21st July, around the Cape of Good Hope (24–25th August 1846), to India, from Madras to Calcutta, with separate manuscript notation (by the same hand) up near the engraved title, giving the dates of the Indian arrivals and departures (“Arrived at Madras 23rd Septr. … [18]46 /
Left 26 [Sept.]… / arrived at Calcutta 5 Octr. s.[outh] heads / Left 1 Jany. …[18]47 s.[outh] heads / Arrived at Madras 6[th Janry.] … / Left — - — 12[th Janry. 1847]”). The track of the second voyage, almost exactly a year later, starts from just west of the Canaries (14 July 1847) and follows a very similar course. Also included is a small portion of the course followed during the return leg of the maiden voyage.

2) ​“To the Right Honourable the Master Warden and Elder Brethren of the Trinity House This Chart of the English Channel is by permission most respectfully dedicated … A new edition”. 1839, with additions to 1840. 3 double-page sheets, unjoined, with seven insets.

5) ​“A New and Correct Chart of the Madeira & Canary Islands, with the adjacent coast of Africa… A new edition”. 1828. Double-page, with two insets.

8) ​“A New Chart of the Coast of Brazil from Cape St. Thomas to the Port of Santos … A new edition”. 1834, with additions to 1836. Folding map on a large sheet, with an additional tipped on flap, and four insets

12) ​“To The Honorable [sic.] the Court of Directors, of the United Company of Merchants, Trading to the East Indies Steel’s New Chart of the Indian and Pacific Oceans from the Cape of Good Hope to Canton and New Zealand: Including all the Passages to India and China .… A new edition improved”. 1832, corrected to 1839. Folding map printed on 6 sheets joined into 2.

13) ​“A New Chart from the Cape of Good Hope to the Islands of Madagascar, Mauritius &c. shewing the Mozambique passages … A new edition”. 1831, corrected to 1837. Folding map, printed on two sheets joined, with 11 insets.

14) ” A Chart of False Bay … To which is added Table Bay … A new edition”. 1832, corrected to 1838. with an inset of ​“Simon’s Bay” and a smaller large scale map at the foot of the plate ​“The Southern Coast of Africa from Saint Helena Bay to the first point of Natal”. Folding map, printed on a single large sheet.

16) ​“A New Chart of the Indian Ocean … A new edition”. 1833, with additions to 1836. Folding map, printed on 3 large sheets, unjoined. The third sheet includes five insets ​“The Harbour of Colombo / A New Edition of the Entrance to the River Hoogly, from the Sands Heads to Culpee … / Continuation of the River Hooghly … to Calcutta / The
Harbour of Pointe de Galle … / The Bay & Harbour of Trincomaley…”.

19) ​“A New Chart extending from the harbor of Bombay to Cape Chanseley, including the entrance to the Gulf of Persia.” 1831, corrected to 1834. Two double-pages, unjoined, with six insets..

22) ​“A New Chart of the Bay of Bengal … A new edition”. 1831, [corrected to] 1836. Large folding sheet. With manuscript addition showing the track of a ship from the mouth of the Hoogly River heading into the Bay of Bengal, with a notation dating a point 16 December 1847.

23) ​“A New Chart of the Andaman and Nicobar Islands … a new edition”. 1833. Large folding sheet. With a manuscript addition showing the track of a ship from the west of Rangoon, to a point just south of Phuket in Thailand, with date notations starting the 18th December 1847.

24) ​“A New Chart of the China Sea, and East India Archipelago, comprehending the Sunda, Molucca & Phillipine Islands … A new edition”. 1821, with additions to 1839. Folding map, printed on six sheets joined, to form three large unjoined sheets. The first sheet with a manuscript addition showing the track of a ship down the Malacca Straits to an point to the north west of Malacca, with date notations starting the 26th December 1847.

25) ​“A New Chart of the Straits of Malacca and Singapore … A new edition.” 1831. Large folding sheet. With a manuscript addition marking a point to the south west of Malacca, with apencilled note of the position of the two landmarks used to confirm the ship’s position.

26) ​“To James Carnegy and Robert Scott … of Prince of Wales Island As a tribute due for Their Valuable Communicationswhich have been of great Assistance in the construction of this Chart of the Islands and Channels at the Southwest Extremity of the China Sea It is now Inscribed by Their Obliged Friend James Horsburgh.” 1821, corrections to 1831. Large folding sheet.

27) ​“A Chart of the Straits of Sunda. Banca, Gaspar and Billiton … New edition”. 1832. Large folding sheet, with tipped on folding extension. (Repaired tear).

28) ​“To The Honble. the Court of Directors of the United East India Company, this chart, Intended as an Accompaniment to, from, and in the East Indies Is Inscribed by Their Faithful and obliged Servant James Horsburgh.” 1819, with additions to 1833. Large folding sheet. Pencilled route marked from the north to the Macclesfield Strait, between the islands of Bangka and Belitung (off the East coast of Sumatra), with a pencilled indistinct date marked: 27th or 29th Dec 1847.

29) ​“A Chart of the West Coast of Sumatra, and Isles adjacent, containing the navigation from Acheen Head to Flat Point … A new edition”. 1833. 2 large folding sheets, unjoined. Numerous insets.

30) ​“A New Chart Sheing [sic.] the Navigation through the Straits of Sunda. To Batavia… A new edition”. 1839. Large folding sheet. Four insets.

31) ​“To The Commanders & Officers of The Honble. East India Companys Ships, in Acknowledment of much valuable assistance afforded by their journals in the construction of this chart , It is now Inscribed by Their Faithful and Obliged Servant James Horsburgh … Eastern Passages to China Sheet I.” 1824, with additions to 1833. Large folding sheet. Four insets.

33) ​“A New Chart of the Straits of Macassar with various additions and improvements … A new edition”. 1832. Large folding sheet. Three insets.

34) ​“A New Chart of the Sooloo Archipelago Exhibiting All the Islands and Passages Between the Islands of Borneo & Magindanao, Together with those between Borneo and Palawan … By W. Heather … A new edition”. 1807, corrections to 1820. Large folding sheet.

36) ​“A New Map of the Coast of China from Pedra Branca to St. John’s Island Exhibiting the Entrances to and course of the River Tigris … A New Edition”. 1840. Double-page. One inset. (Split to central fold).

38) ​“Chart of the North, West and South, Coasts of Australia. from Torres Strait to Van Dieman’s Land, with the Eastern Passages to China; Drawn from the Surveys of Capts. Flinders and King, R.N. Adml. D’Entrecasteau [sic.], Capts. Baudin, and Freycinet, and other distinguished Navigators.” 1834, with additions to 1839. Two large folding sheets, unjoined. 12 insets. 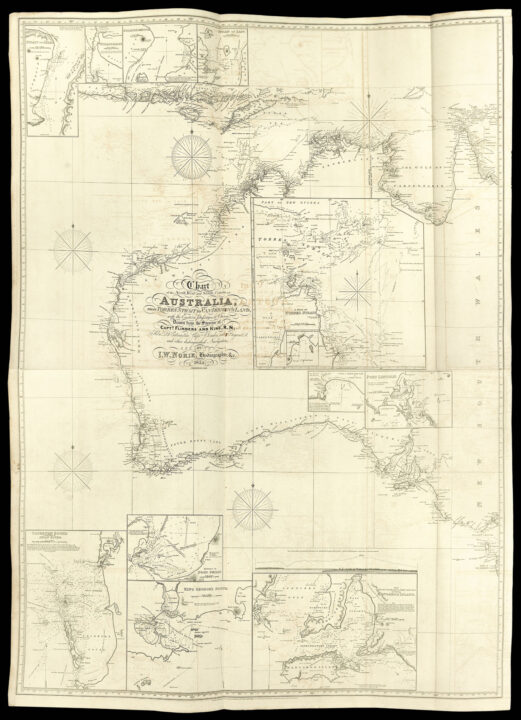 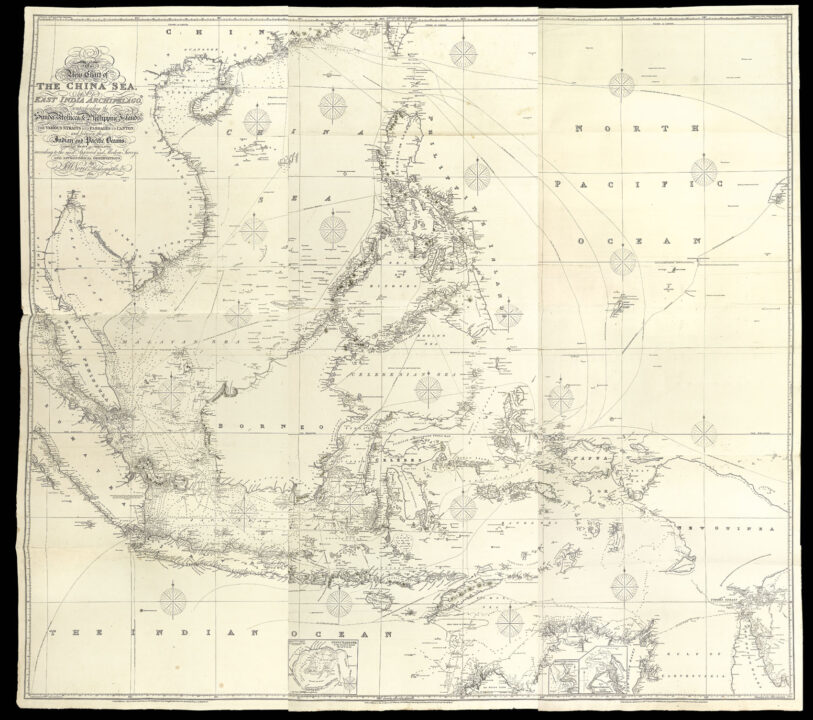