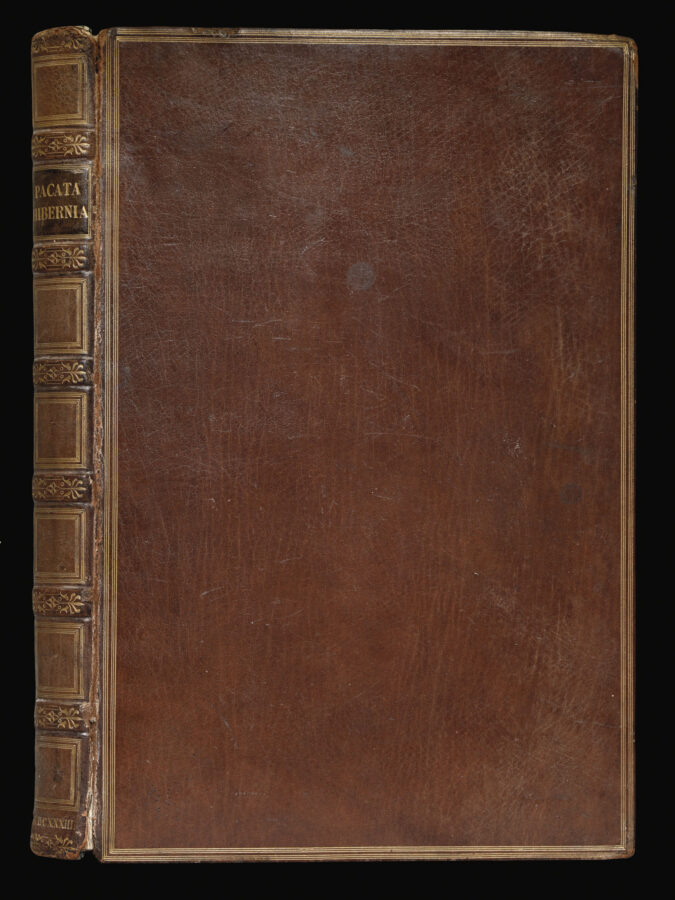 One of the most important source books on the history of Tyrone’s rebellion, containing the earliest illustrations of many Irish towns

Pacata Hibernia Ireland Appeased and Reduced: Or an Historie of the late Warres of Ireland, especially within the Province of Mounster, under the Government of Sir George Carew, Knight, then Lord President of that Province, and afterwards Lord Carew of Clopton and Earle of Totnes, & Wherein the Siedge of Kinsale, the Defeat of the Earl of Tyrone, and his Armie; The Expulsion and sending home of Don Juan de Aguila, the Spanish Generall, with his Forces; and many other remarkable passages of that time are related.

This is one of the great books dealing with Irish history and in particular the final stage of the Elizabethan wars in Ireland (Nine Years War), even if the perspective is that of the winning side. This war was one of the greatest and most tragic events in the history of Ireland, the rebellion which occurred between 1594 and 1603 between England and the forces of the Irish Chieftains Hugh O’Neill and Red Hugh O’Donnell was fostered by the encroachment of English interests throughout Ireland and spread to every part of the country and was inspired by Irish victories at the Yellow Ford and other engagements. Queen Elizabeth appointed Lord Mountjoy as commander along with two veterans of Irish warfare, George Carew and Arthur Chichester.

After the death in 1629 of the Earl of Totnes, formerly Sir George Carew, President of Munster, this work was put together from Carew’s papers by his natural son, Sir Thomas Stafford, who was an officer in his army. Carew himself played a leading role in the events involved and especially in the decisive battle of Kinsale. One of the great set-pieces in the book concerns the siege of the castle of Glin. Carew had taken the Knight of the Valley’s six-year-old heir as hostage and he had the child placed on top of the fortifications sending word to the defenders that they would now have a fair mark at which to direct their fire: ​“The constable returned answer that the fear of his life should not make them to forbear to direct their volleys of shot for he said in indecent terms not fit for me to write: The place is open where he was born and the knight may have many more sons.“

Dunboy Castle was the scene of one of the final, valiant stands of the Irish, who were overcome after a lengthy siege by Carew’s violent assault, resulting in the destruction of the castle and the execution of most of the inhabitants. Of it Carew wrote ​“The whole number of the ward consisted of one hundred and fortie three selected fighting men, being the best choice of all their forces, of which no man escaped but were either slain, executed, or buried in the ruines, and so obstinate and resolved a defence had not been seen within this kingdome.” His ​‘scorched earth’ policy had left the country and the population devastated. The rebellion was over by 1603 and an estimated 100,000 Irish were slain.

In addition to the historical and topographical narrative, it contains a courteous exchange of letters between Carew and Don Juan de Aquila referring to the latter’s gift of wine to his former captor, and finally a long list of the Irish nobility who embarked for Spain after the defeat of ​‘Gaelic Ireland’ at Kinsale in late 1601. The work is further enhanced by a series of seventeen large-scale maps and views depicting the various battles and sieges of the campaign, which are graphic representations of actual events taking the form of a bird’s-eye view with the action being observed from an angle of about 70 degrees. They are the earliest of their kind for Ireland and have been reproduced on numerous occasions. 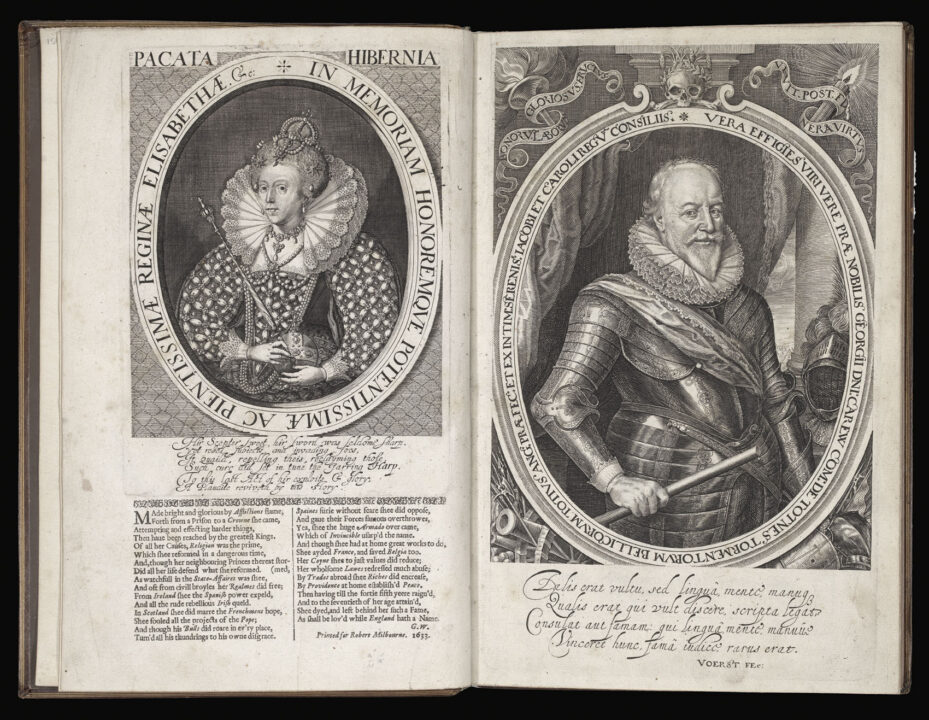 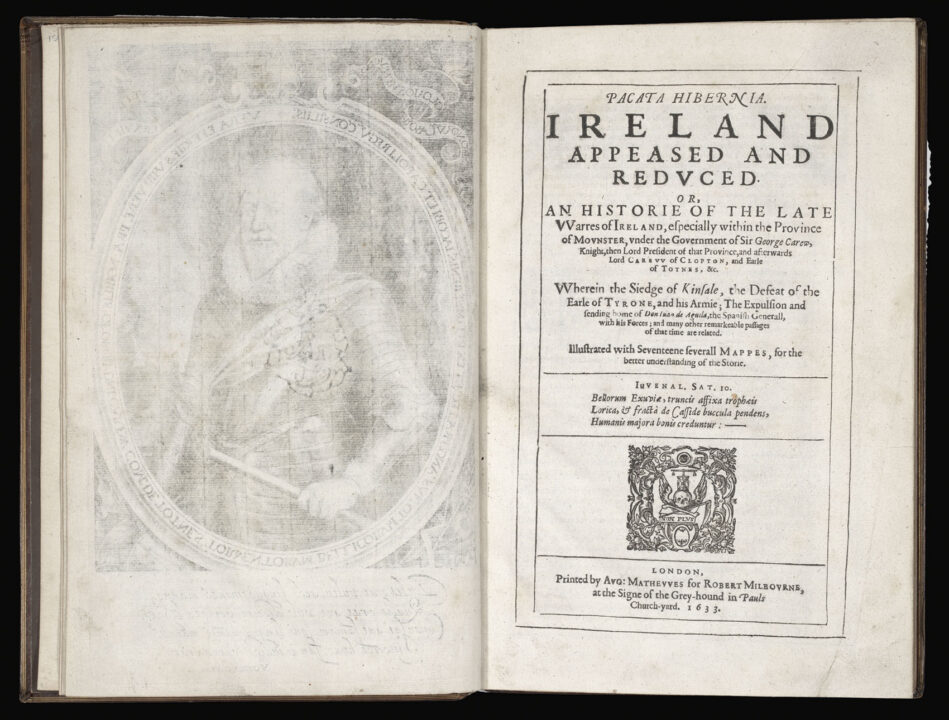 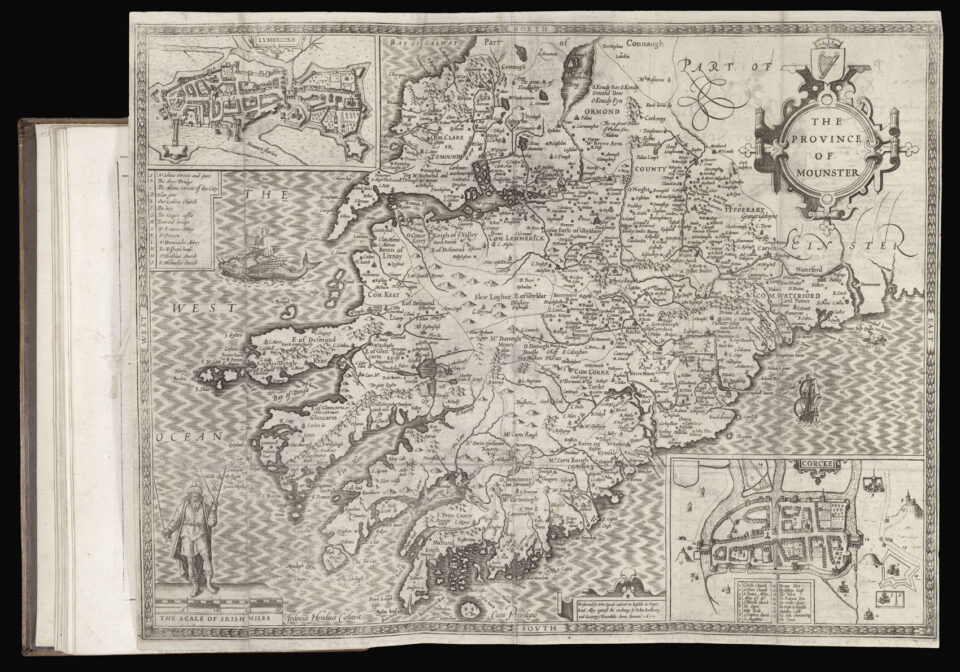