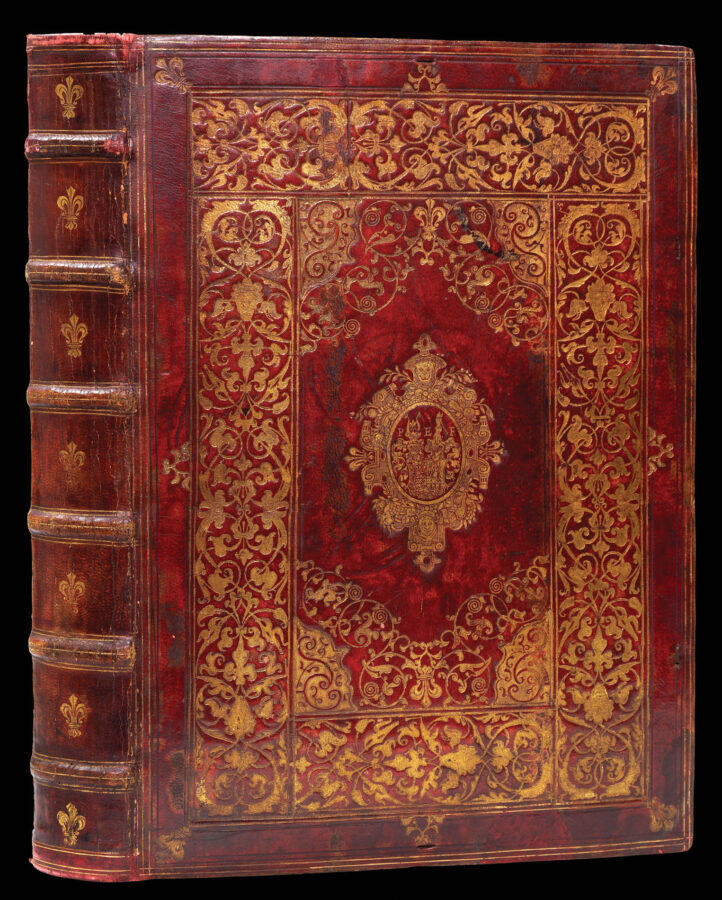 By BRAUN, Georg and Franz HOGENBERG, 1575

A sumptuous example of the first two books of Braun and Hogenberg’s landmark work – ​“the earliest systematic city atlas” (Koeman) – with both volumes in their rare first editions, finely coloured, and lavishly heightened in gold and silver throughout. The red morocco binding bears the coats-of-arms of Philipp Eduard Fugger, a member of one of the richest dynasties in sixteenth century Europe.

The ​‘Civitates’ was published in Cologne in a series of six volumes between 1572 and 1617. The ambitious project aimed, for the first time, to offer a systematic account of all the major settlements and cities of the then-known world. They appear in a realistic, faithfully represented, and recognisable style, using a combination of two- dimensional plans, three-dimensional views, and bird’s-eye perspectives. The subsequent atlas proved hugely popular with the new urban mercantile elite, who were hungry for information on the far flung cities of the world.

In order to obtain accurate representations of the numerous cities illustrated in the ​‘Civitates’, Georg Braun (1541–1622), canon of Cologne Cathedral, established a network of correspondents and artists across Europe who contributed drawings to the project. These included Georg Hoefnagel, Heinrich Rantzau, Jacob van Deventer, and Abraham Ortelius, among others. In fact, Hoefnagel and Ortelius were close friends, travelling extensively throughout Europe, and are often depicted in the foreground of the views, engraved by Franz Hogenberg and Simon Novellanus. Hogenberg was a close friend of both Gerard Mercator and Abraham Ortelius, and was employed by Ortelius to engrave maps for his ​‘Theatrum’.

The plates are brought alive by their depiction of individual citizens from each town in the foreground, from the rich merchants of London and the wild Cossacks of Moscow, to the refined townsfolk of Maastricht. However, Braun had another motive for adding figures: he writes in his introduction to the first book, perhaps optimistically, that because of this his plans would not be scrutinized for military secrets by the Turks, as their religion forbade them from looking at representations of the human form.

The Fuggers No expense has been spared in the work’s production, with each plate having a rarely-seen painterly quality. The use of gold is extensive and lavish, with the minarets in Cairo, Montezuma II’s sedan chair in Cusco, the hemlines of the fashionable merchants of London, and even the shading of the trees all picked out in liquid gold. Such lavish decoration and attention to detail is to be expected from a work that would grace the shelves of Philipp Fugger’s library:

”… the Fugger family were among the largest book collectors in central Europe of the sixteenth century. Holdings from the Fuggers’s collections are now among the treasured possessions of the Bavarian State Library in Munich, the Austrian National Library in Vienna, and the Vatican Library in Rome … The Fugger libraries were investments in education and learning; they represent the progressive turn of the family, which had become wealthy in commerce, towards learned and literary interests: and they helped to prepare coming generations for the careers at princely courts, as well as in municipal and territorial administration” (Haberlein).

It was Philipp’s grandfather Raymond Fugger – a prominent patron of Petrus Apianus (see items 3 & 6) – who was the first family member to assemble a notable library. Philipp’s father, Georg, was also a keen bibliophile, with works on astronomy, science, and mathematics. He acquired the library of the renowned polymath Johannes Schöner while his uncle, Johann Jackob Fugger, also bought the library of physician and humanist Hartmann Schedel. Philipp’s father passed away in 1563, leaving his library to his eldest son, with his express wish – stipulated in his will – that the library not be broken up. Philipp proved to be a fine custodian and added greatly to the library’s holdings; on his death in 1618 it contained 15,000 volumes. In 1655, the whole collection was sold to the court library in Vienna. As well as being a great bibliophile, Philipp was also a merchant with a voracious appetite for news and current affairs, who, together with his brother Octavian, amassed a huge collection of manuscript newsletters – known collectively as the ​‘Fuggerzeitungen’. They were akin to modern day newspapers, and were predominantly published in the main civic centres of Europe. They included information not just on politics and military matters, but also on the economy, courtly ceremonies, and religion. The collection, which covers the period 1568–1605, is now housed in the Austrian National Library in Vienna, and contains 16,021 individual newsletters.

With his thirst for contemporary news and reportage, Philipp must have relished acquiring the ​‘Civitates’, a work that would enable him to flesh out the information contained in the ​‘Fuggerzeitungen’. All the major European capitals are illustrated in the present work, including Rome, London, Paris, Antwerp, Venice, and, of course, Philipp’s local town of Augsburg, with the text on the plan making glowing reference to the Fugger family.

Philipp must have been one of the first to take delivery of Book One, as all the maps bar London appear in the first state. The map of London, which is here in the second state, is bound at the beginning of Book Two. This particular arrangement is, according to Koeman, the earliest known gathering of the atlas, and he records only three institutional examples thus bound: the British Library, the Bibliothèque Nationale de France, and the Studienbibliothek Dillingen. All the maps in Book Two are also in their first state, with Koeman listing only four institutional examples: two copies at the Staats- und Stadtbibliothek Augsburg, one at the Lippische Landsbibliothek Detmold, and one at the Københavns Biblioteker.

It is unsurprising that Philipp was able to acquire one of the first copies off the press, thanks to his substantial wealth and his family’s contacts. For example, the burgomaster of Cologne, Constantin von Lyskirchen, a Fugger merchant, was responsible for supplying the sketches and descriptions of the Asian cities in Book One. Also, his cousin Max Fugger is known to have met and patronised the famed minaturist Joris Hoefnagel (one of the principal artists to have worked on the ​‘Civitates’) when Hoefnagel visited Augsburg with Abraham Ortelius in 1577. It is tempting to think that Philipp might have met them both at this time; certainly his library would have been of great interest to Ortelius. If so, did he seek to employ Joris in the colouring of his ​‘Civitates’? He would have been the perfect choice. Alas, as none of the plates is signed by the colourist, this can only be supposition.

The binding The binding is the work of the ​“Philipp-Eduard-Fugger-Meister”, an unknown master craftsman, most probably from Augsburg. The arabesque tools used in the corners of the centrepiece are very similar to those of the Augsburg binder Kaspar Horneffer, and the Fugger-Meister also used material from other Augsburg bookbinders, suggesting he worked in that city. 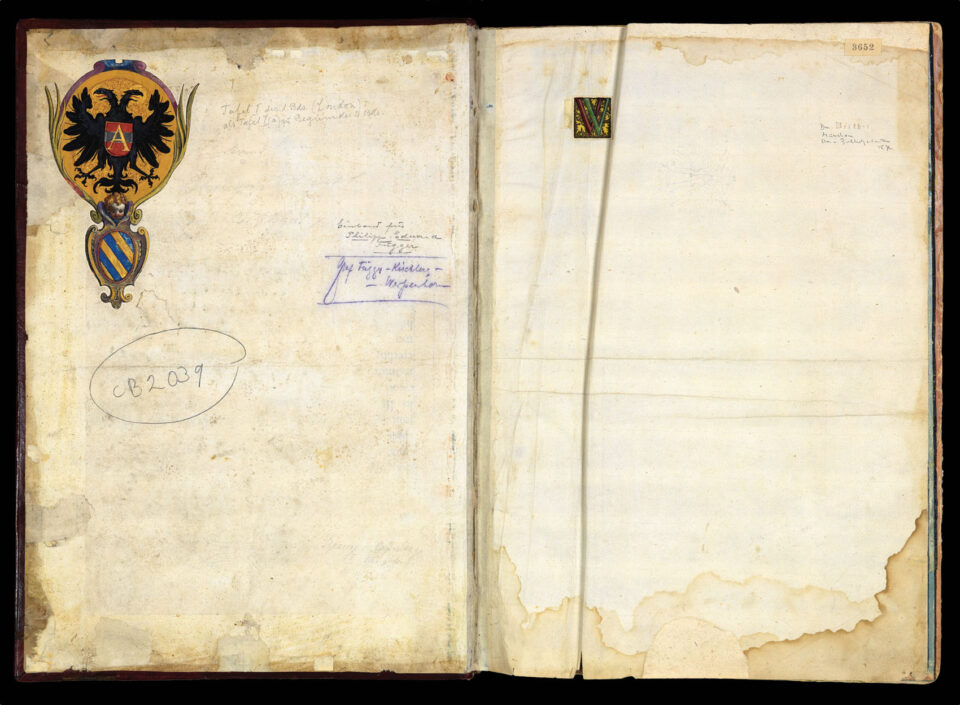 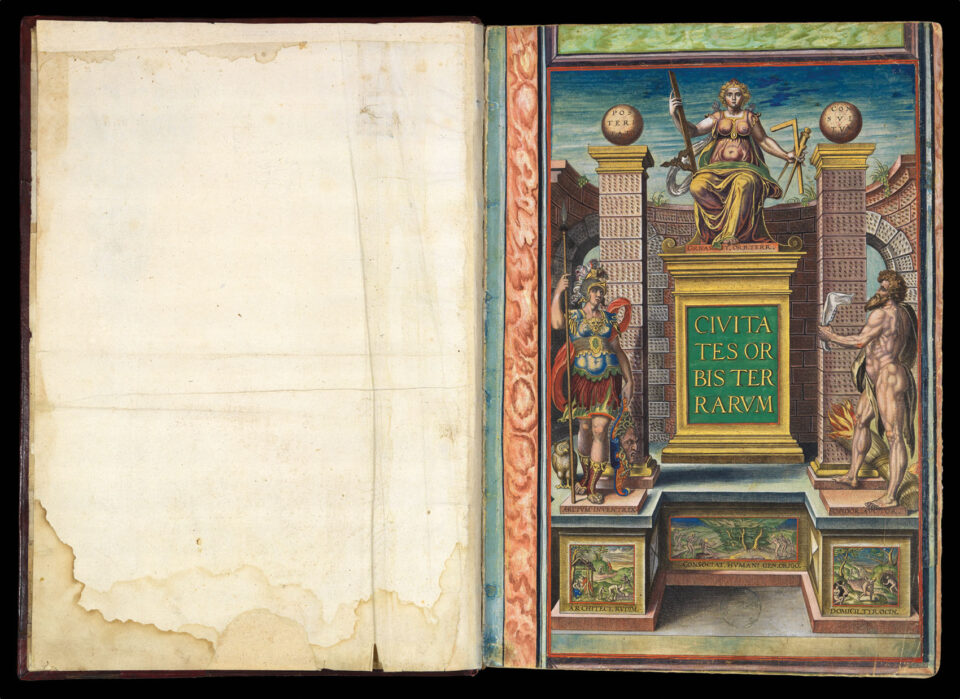 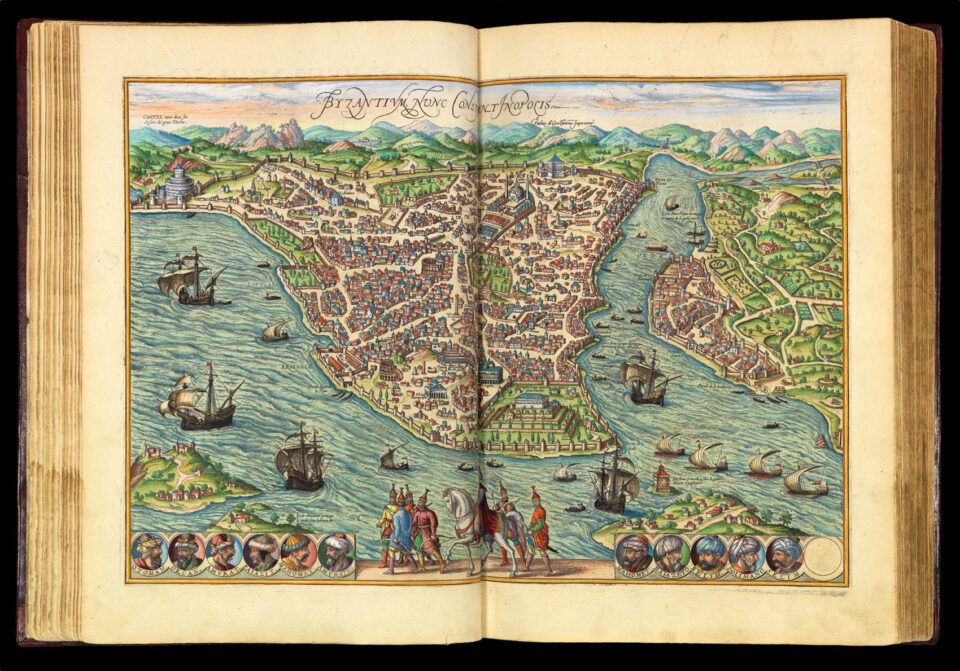 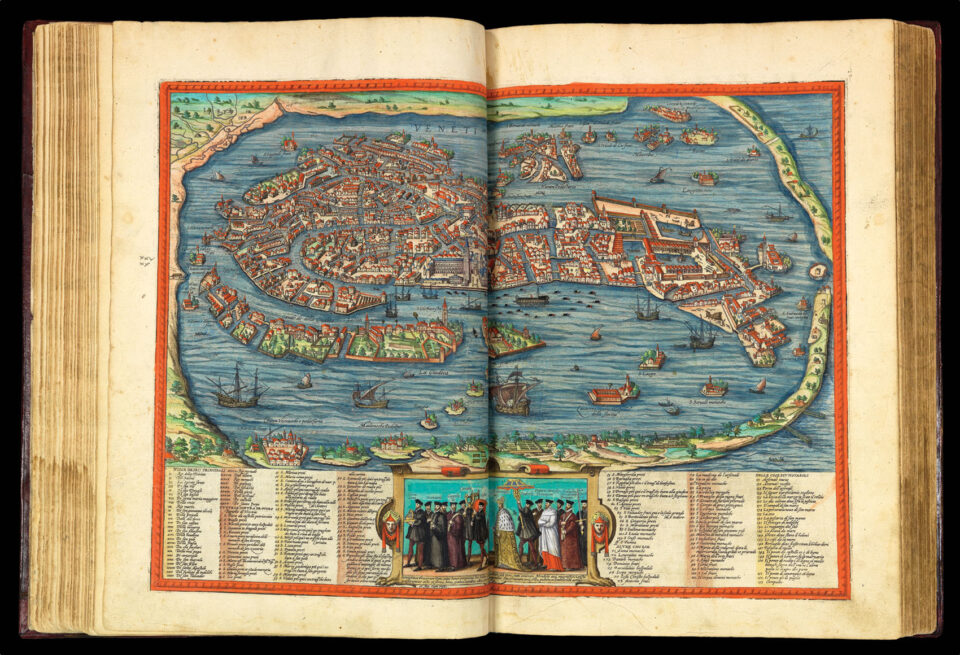 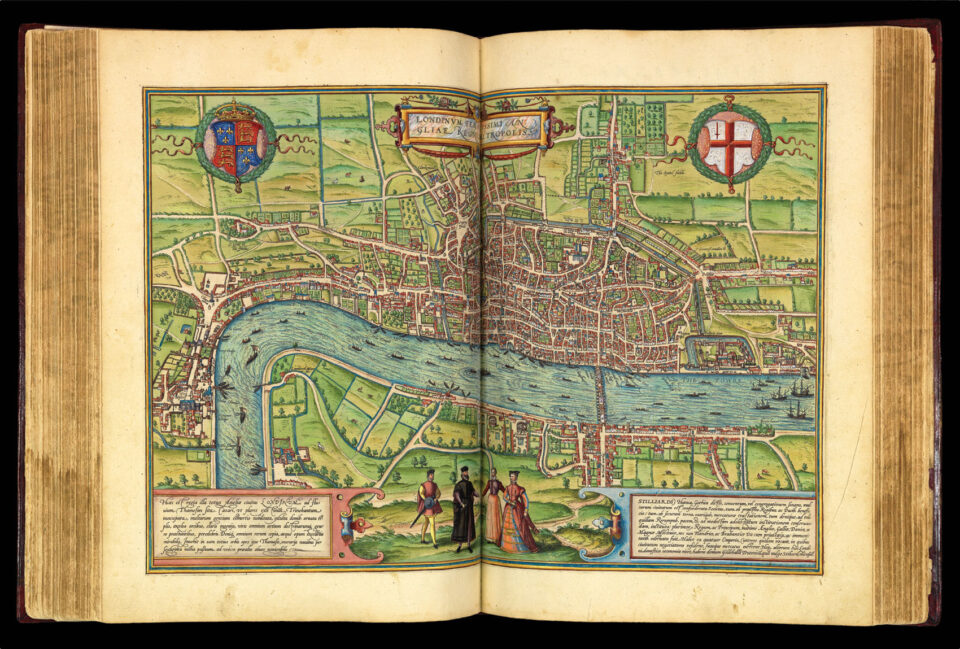 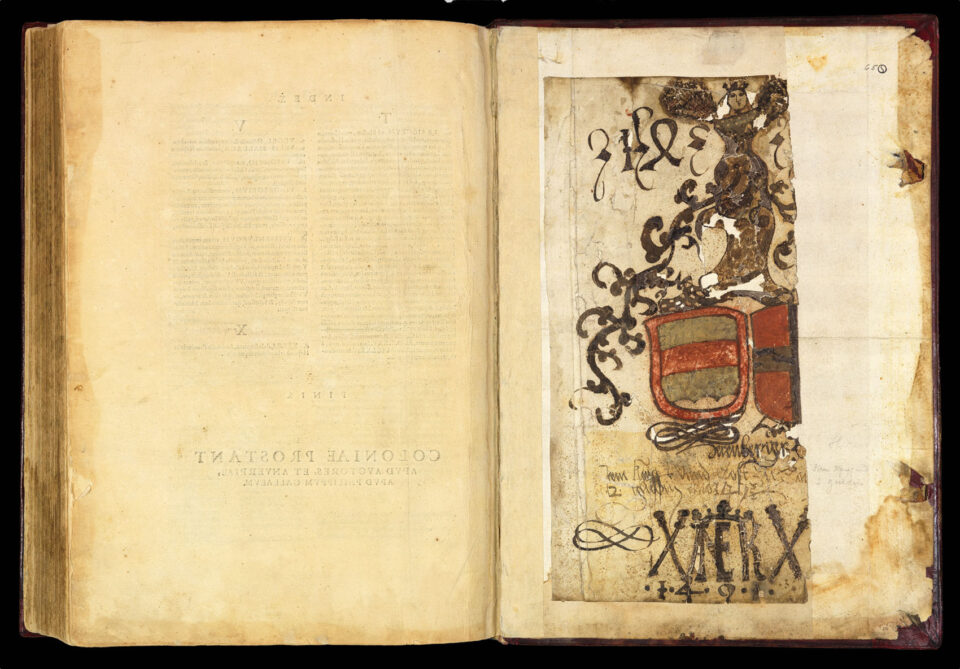